Works for Review by Ant Farm 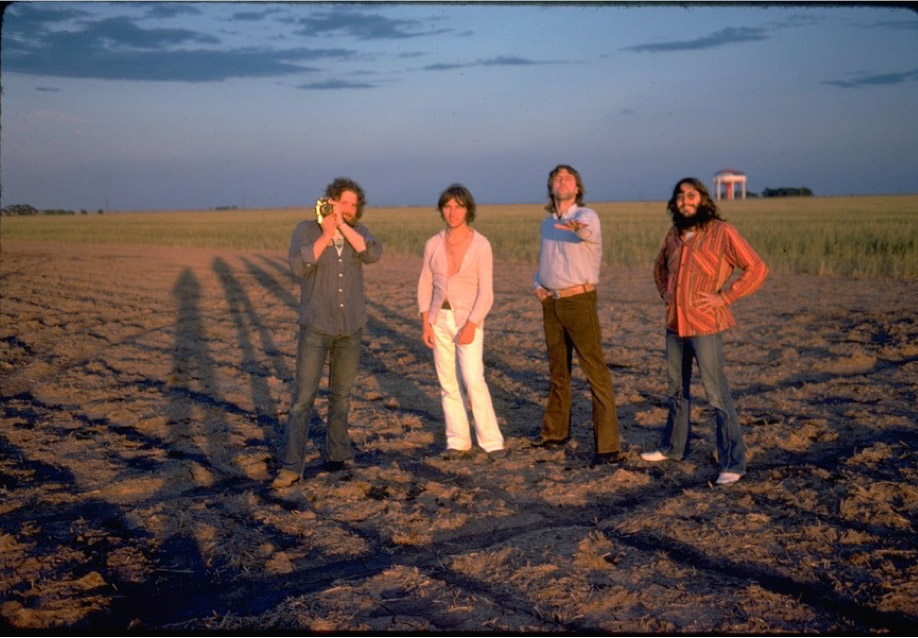 Ant Farm, a group of artists and architects based in San Francisco, produced experimental work between 1968 and 1978. The group combined architecture, performance, happenings, sculpture, installation, and graphic design, and documented its activities on camera in the early days of video art, embracing the latest technologies to disseminate its scathing criticism of American culture and mass media.

Ant Farm was a product of the 1960s in America: rebellion, hippie movement, non-conformist, rock and roll, etc. Out of this ferment they began to create works of architecture, art, performances, and other interdisciplinary forms that signified the stretching of artist boundaries that was in the air of the 1960s with the emergence of video and new media technologies.

Ant Farm as a media collective was part of the communalism of the 1960s, the rock band, and the emphasis on collaboration and collectivity. Ant Farm also stood for the underground, where ants far from our view build colonies and communities. 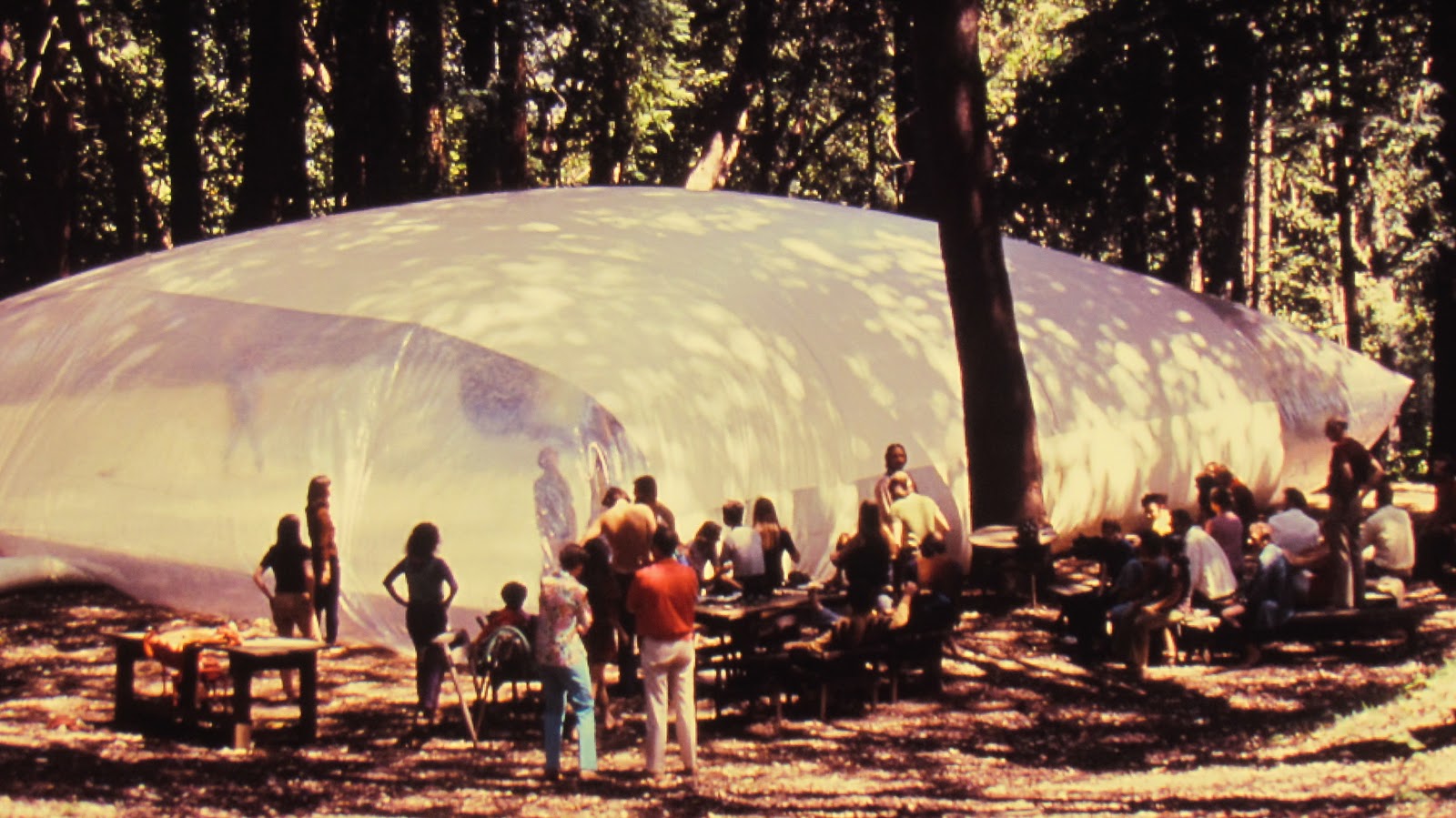 Ant Farm’s architectural interests involved the creation of inflatables, temporary structures that could be built cheaply and efficiently as part of their interest in nomadic, portable lifestyle. 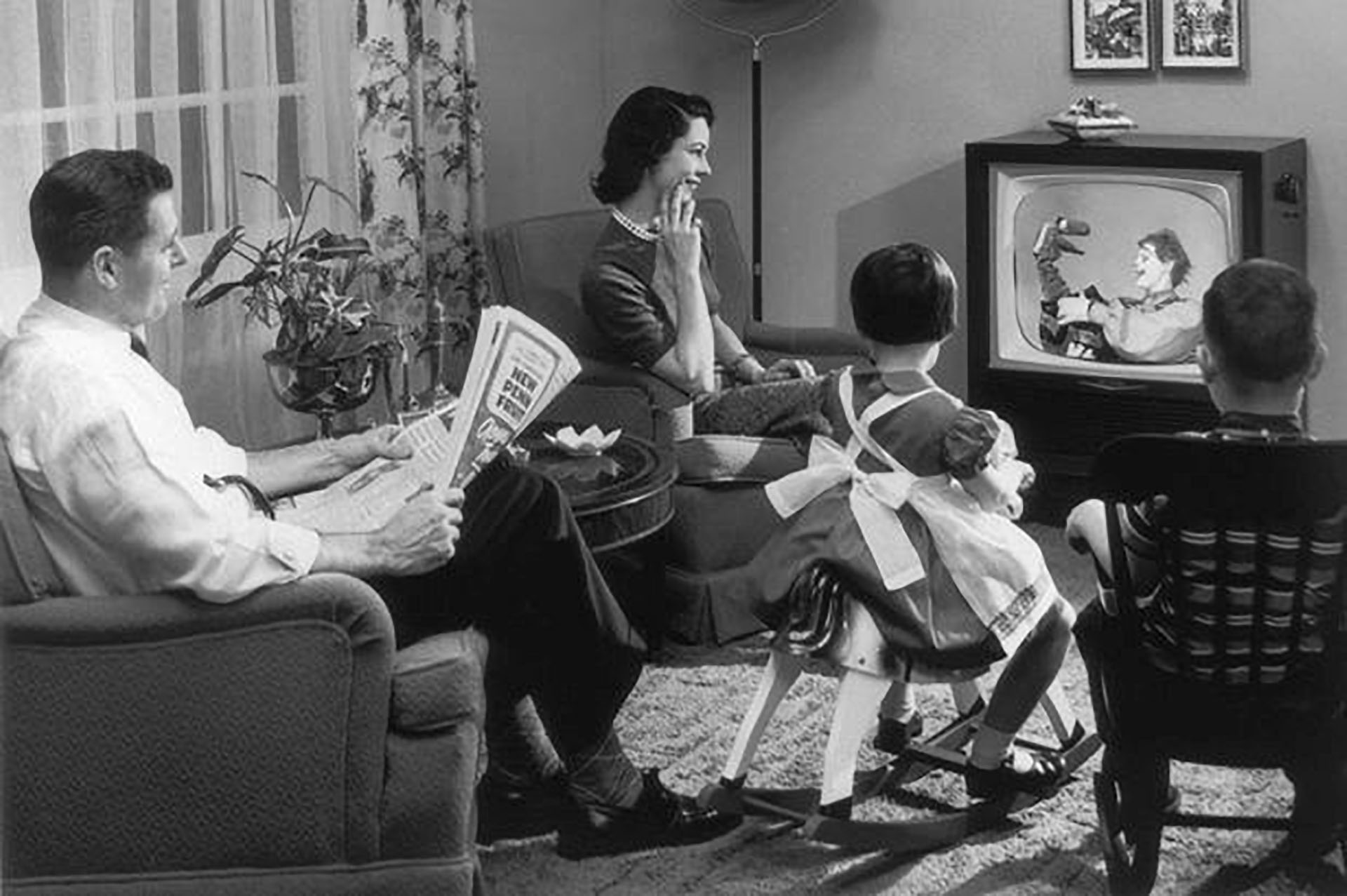 Ant Farm was influenced by growing up on television, the culture of television and its influence on the formative stages of those growing up in the post World War II baby boom.

In 1974 Ant Farm staged Cadillac Ranch Show, its most famous intervention, in Amarillo, Texas, along U.S. Route 66. Ten different models of Cadillac cars were half-buried in a row, nose-first in the ground, at a sixty-degree angle corresponding to that of the Great Pyramid of Giza, in Egypt. Each car features one step in the evolution of the tail fin from 1949 to 1963 in a statement about innovation in a technological era, the American dream, and the absurdity of consumerism. The cars are periodically repainted; they rarely last more than a few hours without new graffiti. The video alternates between footage of the making of the installation and sequences in which members of the group examine each Cadillac in detail, depicting its value as a design object at once wonderful and grotesque and as an expression of the values of American society. 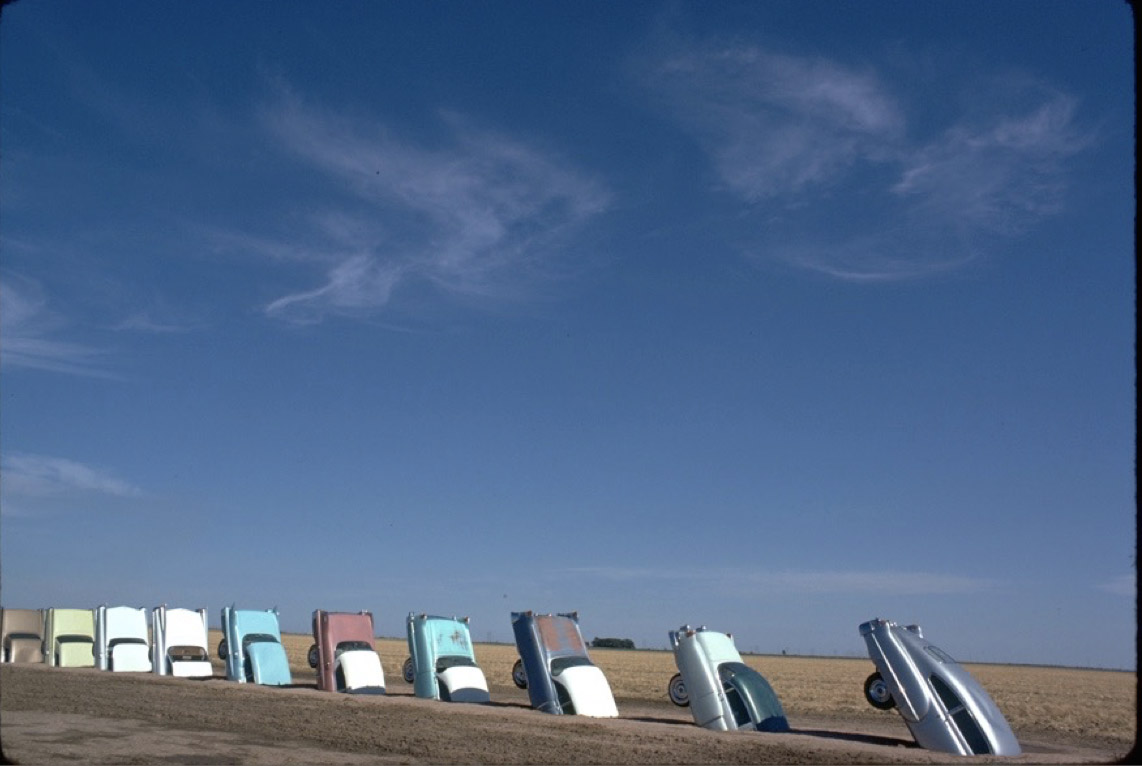 They were deeply interested in the American car of the 1950s as an icon representation of the American Dream, particularly the tailfin, which led to the creation of Cadillac Ranch in 1974. Chip Lord had a particular fascination for the Cadillac tailfin as a design motif of American futurism, utopianism, desire, seduction and pure style. The essence of the Dream Car in America. 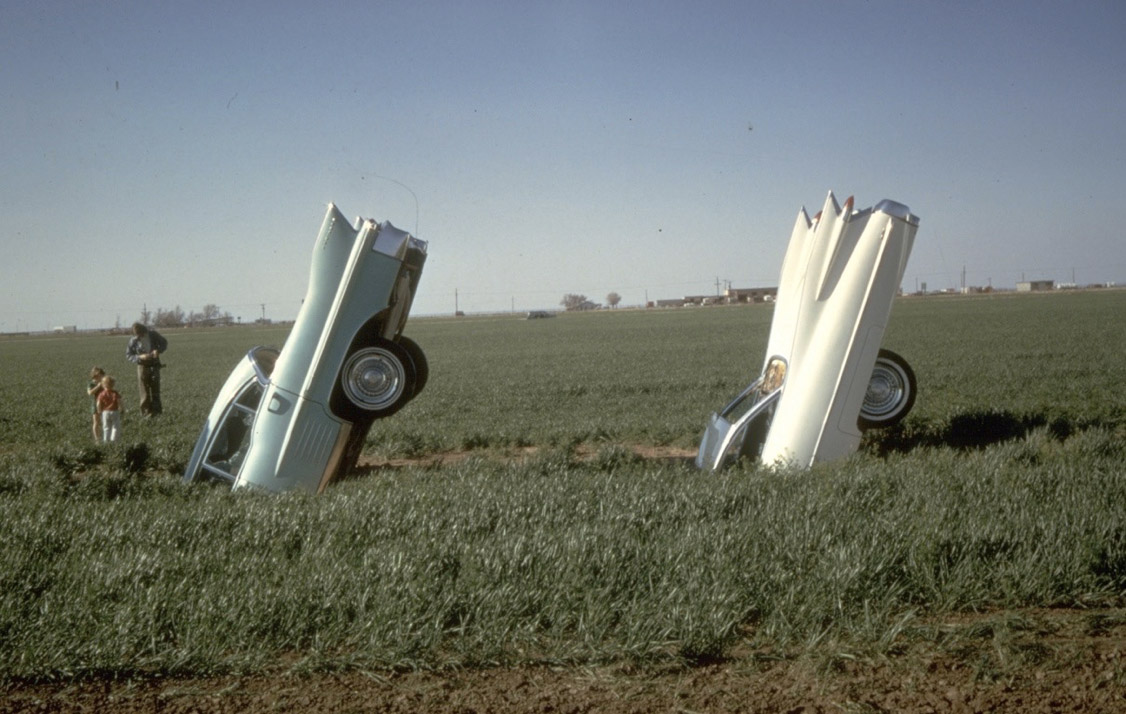 With Cadillac Ranch, Ant Farm realized its vision of the American car as an icon symbol of desire, materialism, futurism, shaping not only the car culture of America, but around the world. Located on Route 66 in Amarillo, Texas, they buried the noses of ten Cadillacs in the ground, Ant Farm proposed Cadillac Ranch as a monument to the rise and fall of the tailfin. It was intended to be a roadside attraction, a readymade (like Duchamp), a symbol of American power and ingenuity turned upside down: a critical assessment that undermines and challenges the shininess of the American Dream, the “the inevitable doom of the entire project of the automobile.” 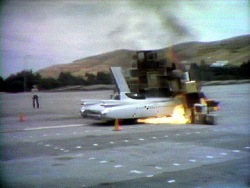 Footage of the actual event, much of which was shot from a closed-circuit video camera mounted inside a customized tail-fin, is framed and juxtaposed with news coverage by the local television stations. Doug Hall, introduced as John F. Kennedy, assumes the role of the Artist-President to deliver a speech about the impact of mass media monopolies on American life: “Who can deny that we are a nation addicted to television and the constant flow of media? Haven’t you ever wanted to put your foot through your television?” 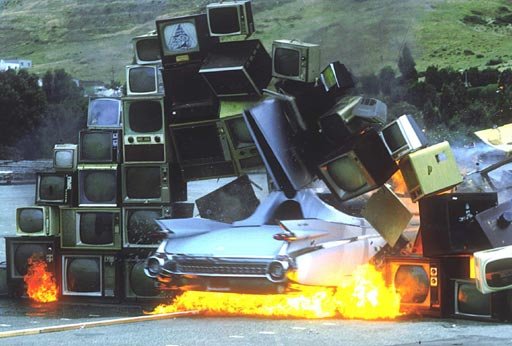 The spectacle of the Cadillac crashing through the burning TV sets became a visual manifesto of the early alternative video movement, an emblem of an oppositional and irreverent stance against the political and cultural imperatives promoted by television, and the passivity of TV viewing.

Examining the impact of mass media in American culture, Media Burn exemplifies Ant Farm’s fascination with the automobile and television as cultural artifacts, and their approach to social critique through spectacle and humor.

Ant Farm organized Media Burn, in which two “artist dummies” dressed as astronauts “drove” a customized 1959 Cadillac renamed the Phantom Dream Car at full speed into a wall of flaming television sets. Using the car once again as a cultural icon, Ant Farm addressed the pervasive presence of television in everyday life, affronting the same media they had invited to cover the event. The video is styled after news coverage of a space launch, including melodramatic pre-stunt interviews with the members of the group and an inspirational speech by a John F. Kennedy impersonator. 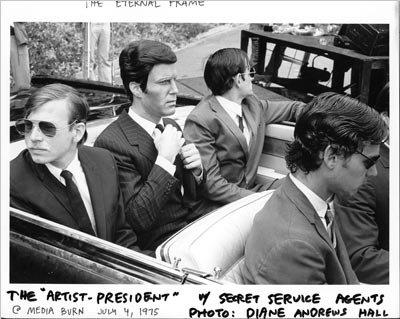 Media Burn is a classic confrontation with the power of television, the symbol of broadcast media, the ubiquitous nature of the image as it is disseminated to our tv sets. 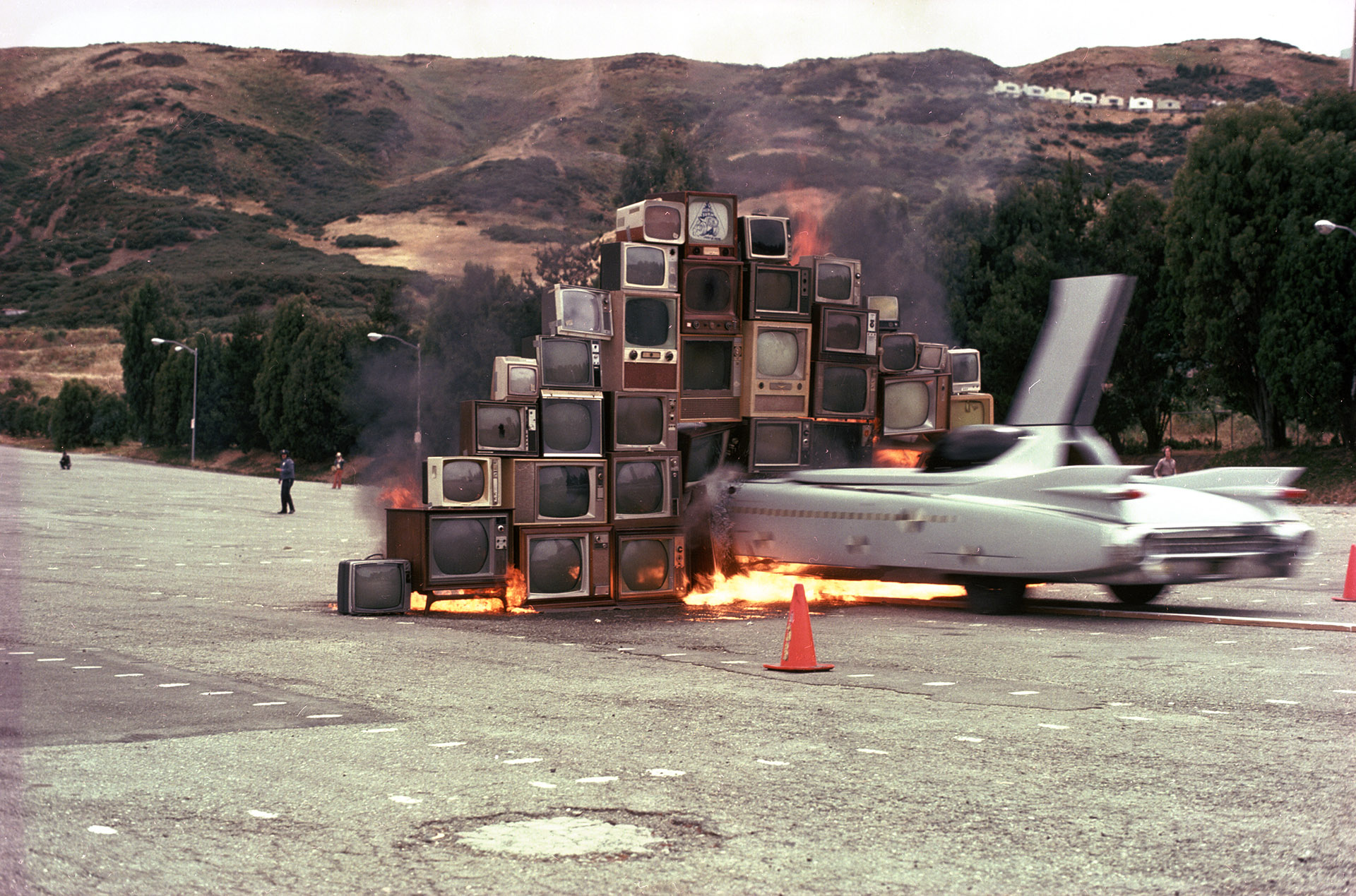 Ant Farm’s series of car concerts and the Media Burn Phantom Dream Car continued to expand the car’s expressive, self-critical range. A Caddy customized into a hyperconcept car, the Phantom Dream Car was designed to enable a short-lived event symbolizing its own futility (being driven into a flaming wall of televisions) and to mock received futurist fantasies of speed and the glories of mass destruction.\ 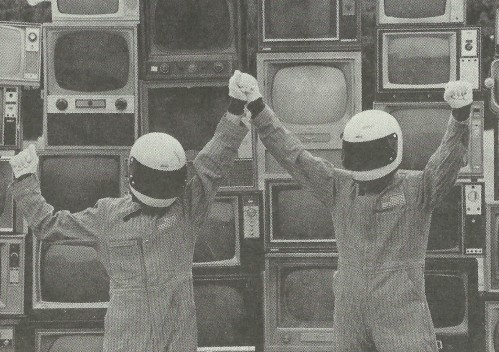 The artist-dummies of Media Burn: Doug Michaels and Curtis Schrier

This work is a challenge to television, as well as its embrace, since the Phantom Car itself is equipped with an elaborate television monitoring system that guides the “artist-dummies” to their inevitable destructive destination into the burning video wall.

The Eternal Frame is an examination of the role that the media plays in the creation of (post)modern historical myths. For T.R. Uthco and Ant Farm, the iconic event that signified the ultimate collusion of historical spectacle and media image was the assassination of President Kennedy in 1963. The work begins with an excerpt from one of the most iconic and significant film documents of the twentieth century: Super-8 footage of the Kennedy assassination shot by Abraham Zapruder, a bystander on the parade route, which is one of the very few filmic records of the event.

Using those infamous few frames of film as their starting point, T.R. Uthco and Ant Farm construct a multilevelled event that is simultaneously a live performance spectacle, a taped re-enactment of the assassination, a mock documentary, and, perhaps most insidiously, a simulation of the Zapruder film itself. Performed in Dealey Plaza in Dallas — the actual site of the assassination — the re-enactment elicits bizarre responses from the spectators, who react to the simulation as though it were the original event.

The grotesque juxtaposition of circus and tragedy calls our media “experience” and collective memory of the actual event into question. The gulf between reality and image is foregrounded by the manifest devices of Doug Hall’s impersonation of Kennedy and Michel’s drag transformation into Jacqueline Kennedy. Hall, in his role as the Artist-President, addresses his audience with the ironic observation that “I am, in reality, only another image on your screen.”

In the uncanny simulation of the Zapruder film, however, the impersonations are not as apparent, raising the question of the veracity of the image. Image and reality collide in a post-assassination interview; while both President Kennedy and the imagic Artist-President are dead and entered into myth, Hall discusses his role like an actor having completed a film.

Through a deconstruction of the filmic image, the artists underscore the media’s importance to contemporary mythology — in which greatness is more a measure of drama than substance — and the extent to which it can be manipulated. In light of television’s transformation of the American political system — and the later election of a movie star to the presidency — The Eternal Frame continues to ring a truthful and haunting chord in the American consciousness.

In the The Eternal Frame Ant Farm, in collaboration with another media collective T.R. Uthoco, re-enacted the Kennedy assassination.

Why you may ask? Perhaps because of the powerful imagery of the Zapruder Film that runs as a narrative through the lives of a generation, in which, like September 11th for another generation, the images holds tremendous power to shape our reality and the impact of the event. In many ways, the images of 9/11, like the images of the Kennedy Assassination, are more powerful than the event itself. 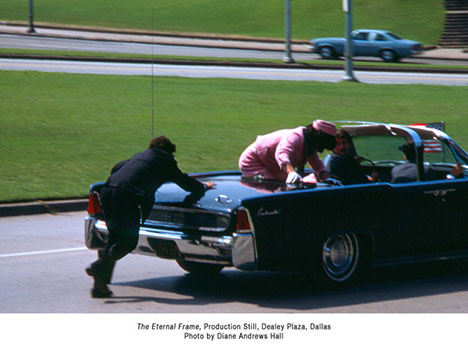 With the advent of television, images course through the global nervous system and reside in our consciousness to remain in our memory forever. Perhaps this is the ultimate weapon: the creation of a media spectacle? Both Media Burn and the Eternal Frame are critical, artistic examinations of the media spectacle and the nature of the mediated image. 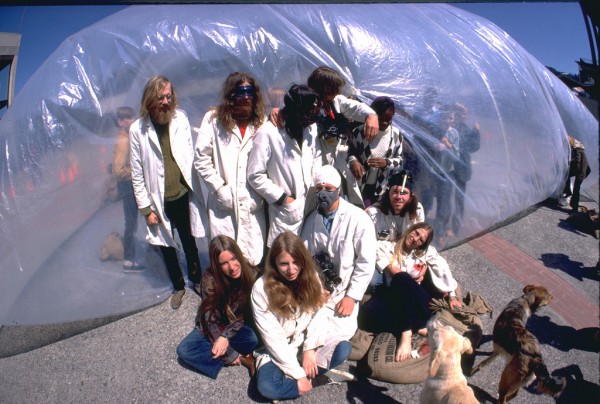 Micro-Project 5: The Art of Destruction 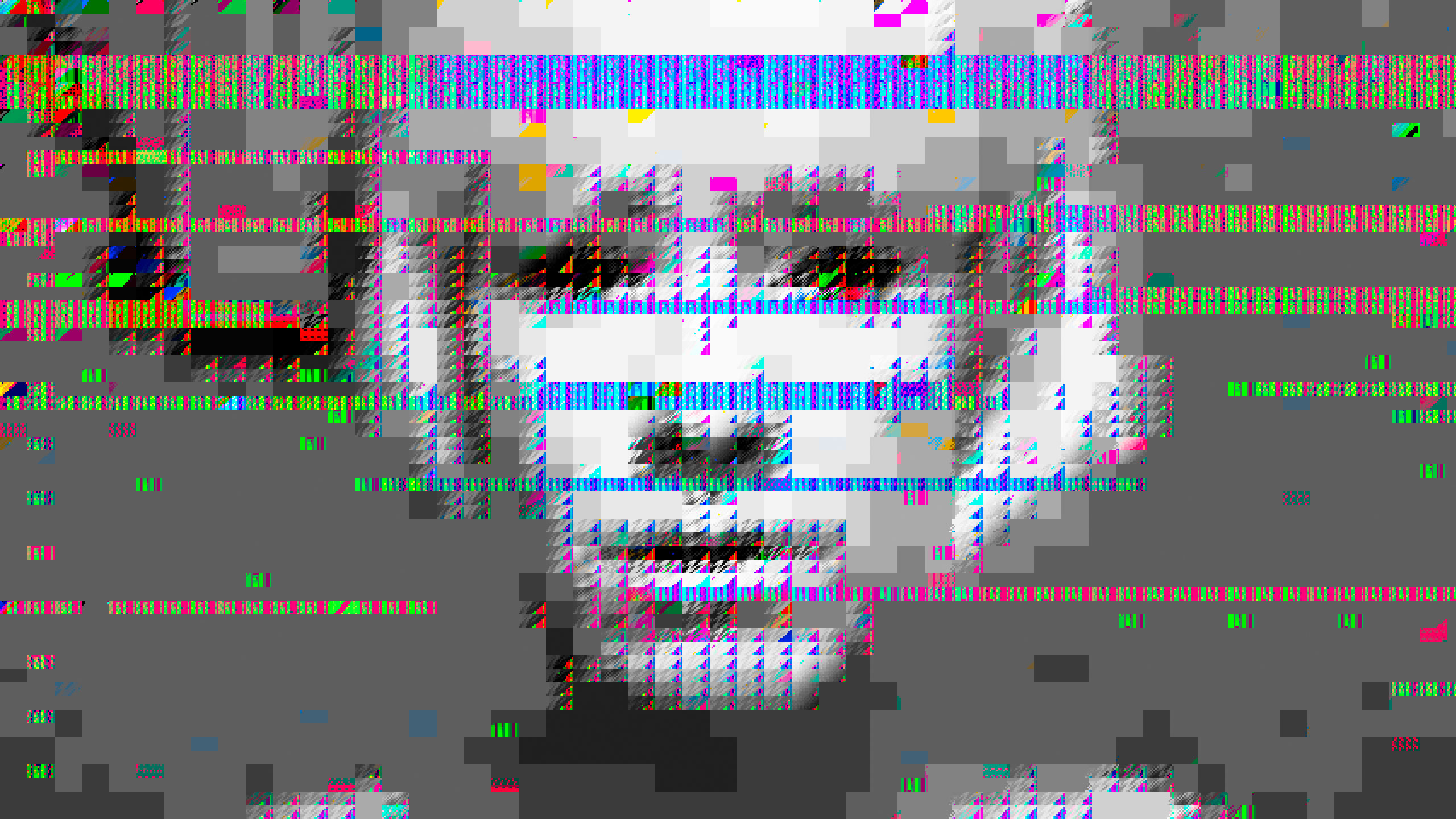 This micro-project combines our study of glitch and the Media Burn work by Ant Farm, both of which delve into destruction as an act of artistic expression. Here we are embracing problems, inconsistencies, and accidents. Examples might be network errors, bad lighting, audio and/or video noise, pixellation, excessive motion, etc.

Choose a medium to work in, including performance, and find ways to design interaction with the specific elements of the material, whether physical or digital and/or performative, incorporating an image, sound, video, animation, object, etc., which ultimately deteriorate the quality of the work, creating a new quality that is its enhancement through destruction.

Form groups of 3 to 4 for this project.

Each project will be presented in class.

You will upload documentation images and/or videos of your project on OSS.