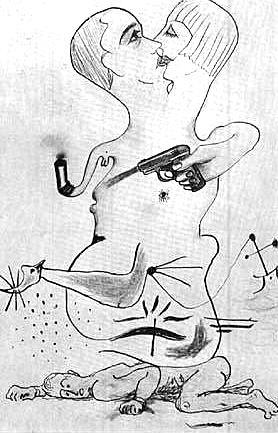 Exquisite corpse, also known as exquisite cadaver (from the original French term cadavre exquis) or rotating corpse, is a method by which a collection of words or images is collectively assembled. Each collaborator adds to a composition in sequence, either by following a rule: “The adjective noun adverbverb the adjective noun“, as in “The green duck sweetly sang the dreadful dirge”) or by being allowed to see only the end of what the previous person contributed. As preparation for this micro-project, we undergo a game-playing exercise, in which we will take a sheet paper, each of us will write one word of the sentence, fold the sheet, and pass it around until the sentence is complete. The surrealists used this technique to produce dream images and ideas: how does the collective form of creation contribute to a work of art that is situated outside the individual’s rational mind?

For this in-class micro-project, we will break up into groups and construct an image-based exquisite corpse using various glitch techniques. Each group will begin with an image, and then one by one, students will operate on the image as a process of deconstruction and glitch, until the final results are an aggregation or composite of everyone’s work.