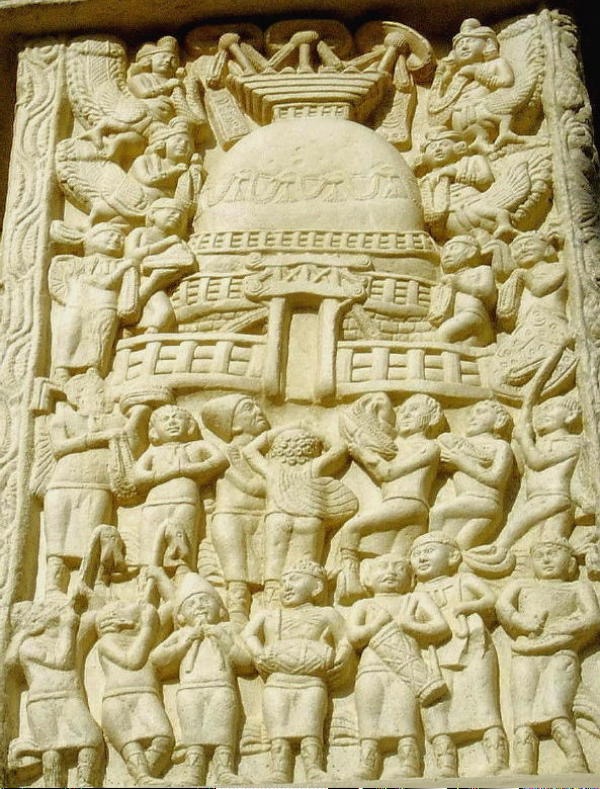 This carving looks like it is on the exterior of the Stupa as it looks naturally lit. What I see is many people congregating around a dome shaped structure. The dome structure looks like it is a Stupa and the people surrounding it seem to be the worshipers. From the many instruments the worshipers are holding, it looks like they are having some kind of celebration around the Stupa. The row of people just below the Stupa look like they are bringing offerings into the Stupa. The top corners of the carvings seem to be occupies by angels instead of people. And just above the Stupa, there seems to be 3 relics. I believe this is representative of the three main gods Shiva, Vishnu and Brahma.

Log in to Reply
Good Visual Analysis Jaffri! But it needs more details. Also, let's try not to get our Buddhism and Hinduism mixed up! The tree parasols refer to the triple gem and not the trimurti.
Log in to Reply
What I see here is the architecture of the stupa, and around it is most probably worshippers and devotees of the Buddha. I also see that at the bottom of the carving there are some of them holding instruments, which shows that they were worshipping Buddha through music. In terms of composition, that the top half shows the Stupa and surrounded by 4 humans with wings, which could be some kind of flying creatures, protecting the stupa. Below them we see devotees, holding up with different objects to the stupa, which could be offerings they are holding and devoting to Buddha. The most bottom row, are basically musicians, or people supporting this worship here, in terms of chants and music. They are playing instruments, and blowing some kind of trumpet for the worship.
Log in to Reply
Nice visual analysis! I appreciate how you try to figure out the roles of each of the figures from protectors to devotees to musicians/supporters/ritual specialists.
Log in to Reply
This is an image of a relief carving depicting of what appears to be a scene of relative importance. The composition is divided into an upper and lower half, such that elements from the top half do not "intersect“ with the lower half. What is seen in the lower half appears to be 2 rows of people. The bottom row of individuals appear to be musicians, they are appear to be carrying instruments and some are carved to be playing them. I would interpret the top row of individuals to be a group of devotees. Some are carrying offerings of food, garlands and what appears to be a flag. In the middle is someone with his back facing us, looking towards the Stupa in the top half of the carving. The composition in the upper half is quite clear, in the middle is a Stupa with winged individuals at the top half of the relief and individuals near the gate of the Stupa carrying garlands as well. I would interpret these individuals as devotees going around the Stupa (circumambulating) carrying offerings of garlands. The winged creatures depicted near the top of the Stupa also bring forth garland offerings. I think the focal point of this carving would be the process of circumambulating the Stupa by devotees. In the carving, most of the Stupa is unobstructed with details of the structure carved clearly, including row of garlands at the dome of the Stupa. The gate of the Stupa is clearly shown without obstruction from other elements in the composition and a person with the back shown to the viewer below the center of the gates, which hints at its importance of the figure. In this case, I would think that figure is meant to signify the viewer at Sanchi, about to visit the Stupa, being welcomed to visit (musicians). To add on to this point, the winged creatures are known as Kinnara, a symbol in Buddhist and Hindu mythology, believed to "watch over" the well-being of humanity during tumultuous times. The Kinnara is a symbol in Hindu mythology, believed to represent love, devotion, and longevity, something held to be important by many people. I believe they were included in this carving as a form of auspicious motif to draw people to convert to Buddhism. However, in Tibetan Buddism , the Kinnara is a symbol of enlightened activity, hence their inclusion in this carving would make it suitable.
Log in to Reply
Nice visual analysis! So, where is the information about the Kinnaras from?
Log in to Reply

I see a grand stupa in the middle top of the picture. There are eight angels surrounding it at the top can be seen by their wings. All of them are holding something and facing the stupa symbolising that some ritual event is going on. There are two roles of worshippers below the stupa. Some are praying and playing musical instruments while looking up at the stupa. In the middle of the second linear role, a carved human figure is praying and facing directly towards the stupa. His centralised position symbolises his importance. This shows the significance of the stupa and the religious practices.

Log in to Reply
You have made an interesting point about a grand stupa--what makes it grand? Are there really 8 angels or Kinnaras flying around the stupa? You have made another excellent point about the figure with his back towards us--so, with his centralised position, who might he be?
Log in to Reply
In the image about we can see that clearly there is a Stupa prominent in the relief, also to note, the entrance to the stupa is also blank (could be an indication of Buddha whom cannot be depicted) there is rows of people on the bottom with some have drums and flutes/recording which might show us that it was a ceremony that was ongoing. Depicted on the top is creatures with wings and bird legs, which are definitely deemed as celestial beings and these beings are also offering flowers to hang on the Stupa, this may show that the "relic" in the stupa is seemingly worthy for praise by celestial beings.
Log in to Reply
What an interesting point about the empty entrance representing the Buddha! Perhaps it can be both? Emphasising the entrance to the stupa and hence emphasising the stupa as well as reminding us of the empty seat? And, what an interesting point you make about the relic in this stupa! if it is indeed praiseworthy then whose might it be?
Log in to Reply

The most prominent figure in this piece is the dome-like structure in the top middle. The fence below it connects to a gateway in its center, similar to that of a stupa’s entrance. There are three parasols placed on top of it, which may be associated with the three treasures of Buddhism.

The bottom half of the relief also depicts figures facing the dome, in gestures of prayer and presenting offerings. Hence, it is highly likely that the structure is a stupa, since it is a place of worship. Some of the figures are also playing musical instruments such as drums and flutes, which may mean that they are performing a ritual or a celebration. I also noticed that all of them are topless, which reveal their gender to be all males. Furthermore, all of them are also wearing the same design of boots, which hints that they are all from the same tribe or community. It is proposed that these figures originated from a cold country and are hence dressed in winter boots, However, I think this assessment contradicts the fact that they are half naked. Instead, I believe that the boots are part of their attire for the ritual, something like a costume we would wear for a performance.

Beside the stupa, there are the same male figures seemingly approaching it. This may be depicting devotees circumambulating the stupa in worship, since they are holding strung beads or garlands as offerings.

Above them, surrounding the stupa, there are winged figures with bird feet holding the same garlands. They seemed to be in mid-flight and tilting forwards, as if to drape the garland onto the stupa. They might have gotten the garlands from the devotees, and are thus the messengers between humans and the Buddha. This may depict the spiritual world or heaven, since they are unnatural and placed on the top half of the relief.