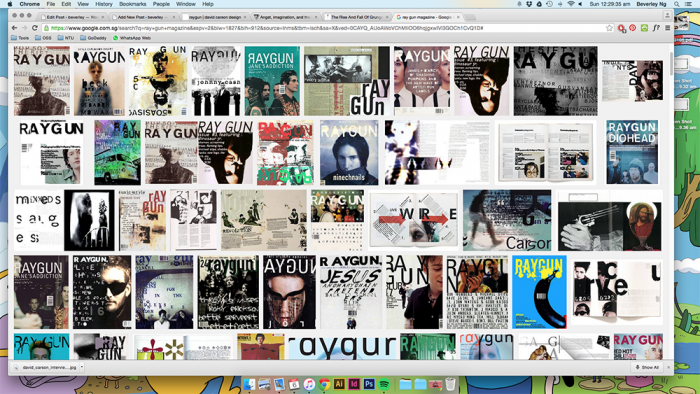 The introduction and success of the personal computer allowed for designers to take the clean design of modernism, destroy it and reassemble it in a new visual language. Most associated with the ideas of deconstruction was the designer David Carson whose work for the magazines Ray Gun and Beach Culture helped develop the aesthetic commonly referred to simply as deconstruction. Wolfgang Weingart‘s approach to typography and design was being carried on by April Greiman and labeled as New Wave. Emigre exploded onto the scene in 1984 with a host of new approaches to, and uses for, typography. All while students from the Cranbrook Academy of Art, such as Ed Fella and Andrew Blauvelt were allowed the freedom to explore and develop these, and many other design aesthetics.

I really like David Carson’s design approach and I feel that my work will have some elements of his style.

Thematically, it pairs well with this concept of remixing that I am exploring in my work. I think what I want to do is not just to simply present whatever I have on hand as it is, but to give it a new meaning. I feel that the style of deconstruction and dirty type has never been fully explored by students in ADM. In my VC classes, we are constantly exposed to very particular kinds of aesthetic, which one of my VC prof finally addressed in our final critique some time ago by picking up a couple of publications and saying quite simply that “these are all the same”. What I can observe from this is that orderly layouts inspired by the grid and clean typefaces are making a comeback. In the past, minimalist, clean layouts were just as popular as it is today, revered for its timeless quality. Before this, grunge typography and dirty type like what Carson had made here had been considered inspiring and revolutionary. Designers, armed with the computer, are able to digitally manipulate the clean design of modernism, destroy it and reassemble it in a new visual language.

Using the glitch experiment tool I shared in my previous post, I’ll glitch up body of texts for fascinating results, and then use that as a starting point for my typographical and layout exploration.