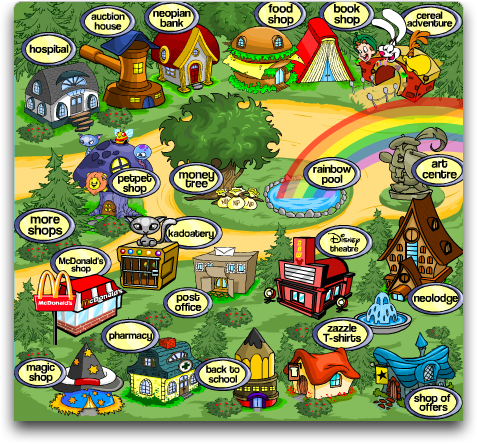 I normally talk about movies and cartoons from the previous decade but I feel it’s time that’s time to discuss something that’s more  exclusive to the 2000s, and that’s the popularization of the internet. I know it’s been around since the 90s, but back then it’s mainly used for pornography and black market goods. I know that’s still the main use to many but as the 2000s decade was progressing, all these new websites were coming along, many of which was for social networking that wasn’t something most kids were going into, so what kids really had then was this wonderful browser-based animal RPG called Neopets. It’s where I went onto the internet when I was young. Neopets was probably riding off the super popularity/success that was Pokemon. Neopets was a site where we could have virtual pets, and there was a large world there that we could do quite a bit in… it was just a quirky early internet site made for college students…

A transcript from the video which I found earlier today about Neopets, and I want to write a bit about it as I think it’s a good starting point/back story to the virtual part of my project.

I think Neopets.com is the virtual equivalent of a physical childhood play thing for some people my age. If you asked them what is their earliest internet memory, perhaps it will be Neopets. Like Pokemon, Neopets is made up of fictional world that is richly inhabited with creatures, items and many more. I didn’t own a GameBoy when I was a child, but once in a while when I meet my cousins, I would borrow their GameBoy and play Pokemon on it. We would take turns playing it and while it was quite fun, I never fully experience the fun of being a Pokemon trainer. But I had a computer at home and my cousin got me onto Neopets. I became so obsessed with it, and I was absolutely enchanted by this rich world. That was in 2004 when I was ten years old.

Anyway I could go on about why I loved Neopets so much, but it is quite embarrassing and I remembered being called a ‘Neopets freak’ in primary school, and it’s not the main idea of this entry… But what I eventually took away from my Neopets-crazed days was learning how to code stuff. There was a page on the website that taught users basic CSS and HTML (things couldn’t get that complicated on a web browser then anyway), which they could apply on their user profiles to beautify it. Looking back, I thought this was a very interesting way to get users to personalize their profiles. I’m not sure what was the reason behind encouraging players to use coding to change their colours of the text and add web links. As a young girl, I was drawn to making my user profile pretty and stuff, so I had to learn these basic tips and I think that really got me interested with web pages and web design. I didn’t have a topic that I was interested in, so I dedicated most of the web pages I made to my dog. I took pictures of my dog and put them on the web page, and accompanied the photos with stories about her. Anyway, I got really carried away making all these web pages. But it was all in good fun, and I eventually quit playing Neopets, moving on to making more of these webpages for good.

I wish I had screenshots for all these stuff. That’s one of the reasons why I wanted to embark on the virtual part of my project. The Internet is brilliant, and with it, we are able to keep track of data. I quoted Deyan Sudjic previously about the immortality of data on the virtual reality, but I sometimes feel that paradoxically, all of these data is quite ephemeral, as objects of memory. They are more fleeting than physical things: a piece of Post-It someone left for you, or a piece of jewellery your aunt gave you. The concept of time and relevance on the Internet is perceived differently than in reality. Once something is updated, and new things come along, you can’t really find an old version anymore. Things get old quickly on the Internet. Servers and domain spaces have a time limit. My old websites can never be retrieved again because the free web hosts I were using were either gone, or were developed into something else. I tried to keep backups of my artworks on the Internet on a thumb drive, but I lost it ages ago. Amongst various attempts of rebooting my virus-infected computer also leads to the loss of data over the years. What I have now is my blog, my Internet journal. Even the media I upload have a shaky, unpredictable life span. Old pictures from 2005 cannot be retrieved, because the servers have died. I thought my blog would be the most appropriate thing I can use to talk about this ephemeral nature of Internet memory, because I have been using my blog for a long time, and given it’s time and space on the virtual realm, it is quite a relic. The rest of my Internet ventures have been very short-lived, relevant for the time that it was popular.

Neopets’ rich fantastical world also retains the nostalgic and innocent quality of childhood playthings, albeit on a digital space. When it became really popular back then with children, it was labeled as a website with ‘sticky content’ that got children to spent hours and hours per week on it (children like me). Comparatively speaking, the effects of Neopets on young people is nothing compared to websites like Tumblr and applications like Instagram, both of which are used widely by many young people. Tumblr is also a rich world full of content pertaining to real-life and popular culture. It is a mass Internet media of unfiltered content, which can be a good and bad thing. For example, pornography .gifs are a popular thing on Tumblr. Skinny inspiration is also popular on the website.  I mean, I’m no prude or anything, but I find it quite worrying that such content are so easily accessible to anybody. Along with the few other popular social websites, it generates and feeds a culture that thrives on these images for envy and jealousy. Tumblr’s (in)famous endless scrolling function means that you’re constantly, forever, addicted to this stream of content.