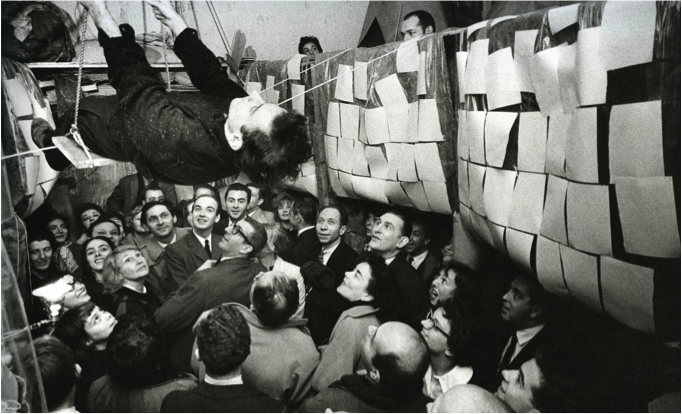 Whitman’s ‘American Moon’ is a theatrical piece that takes into account the architecture of the space and transform it for the piece. The performance also interacts with the audience members, notably by “sectioning” them by partitions which are also part of his architectural transformation of the space. I think of these “sections” as some sort of channel, wherein different groups of the audience views the performance from their unique perspectives.

This audience-space relationship illustrates the idea of the “composite-image space” as mentioned in the reading “Electronic Cafe International” by Kit Galloway and Sherrie Rabinowitz. Both are interesting in creating the concept of a virtual space and networking before the advent of the Internet and technology as we are familiar with today. In the reading, the virtual space is understood as an area for collaboration and networking to take place, a place where social situations “exist without traditional etiquette”. Barriers and boundaries are broken down, people are freed of their physical identity and existed as an “avatar”. Why is this important? It helps to bring ideas and common research and ideas together, without being compromised by geographical issues.

In similar fashion, Whitman tries to emulate this shared space by transforming the theatre space into an environment that is quite multi-dimensional. By having the audience seated in these “tunnels” seem to replicate the idea of a network, of a common, unseen space: that each participant in the audience is holding on to a piece that is a part of a larger picture, which is what the virtual space is very much all about: the idea of a composite-image.

Apart from the research critique, I also find the above quote from the reading very interesting indeed. People did used to think of the telephone as a really powerful invention, but yet how many of us do actually pick up the phone to talk to somebody today? We are both very active and reclusive participants in this age of social networking, we know everything about somebody but we also know nothing — but that’s a discussion for another time 🙂