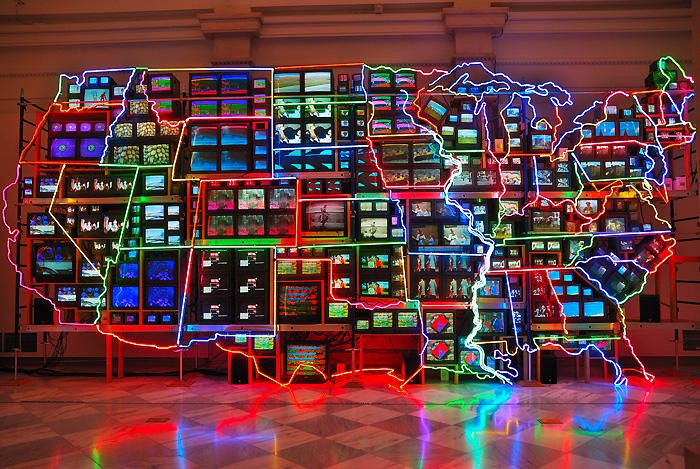 How might the Open Source system of sharing & collective narrative be a creative inspiration and approach for artists?

We can think of open source as a tool/medium for new ways of expressing ourselves as creatives in this postmodern time. Open Source’s encouragement and endorsement of sharing, and its collaborative methods of exchanging information and ideas is a kind of gateway for new genres of art-making. The essay “The Open Source Artist” draws example from the works of Nam June Paik, and his manipulation of the video and television set in his artworks. This is similar with the OSS’s artist approach in the sense that it is currently a significant concept in the age of information technology. Using and appropriating the use of OSS in our art making in our time is similar to Nam June Paik’s use of TV and moving images as it was the popular/prevalent form of technology at the time.

Another point in the essay that resonated with me is that the Web provides the artists immediate and accessible platform for showcasing creative work. The Web’s open concept provides anybody with a chance to be try to be an Internet celebrity, for example. The accessibility of these concepts give people a chance to push themselves creatively. People are also able to easily own a piece of virtual turf, by buying a web-host. cPanel could even be perceived as a new form of artist studio. One is able to reach out for many open sourced materials out here to make virtual artworks of their own: such as scripts, source codes. Even video tutorials that teaches you these things are made easily available and often at no charge. This is one of the benefits of working creatively in an OSS environment.

In the essay, “The Way of OSS”, the Internet is referred to as an Open Source repository. As an avid user of Dropbox, I can really relate to this concept. The “cloud” concept is similar to open source, as it encourages and aids creatives in collaborative working. It is also mentioned that the OSS community is marginalised, but the products of some OSS projects have definitely serve to improve millions of people in all areas of their lives, whether they are creatives or not.