Ancient China believed that there is life after death and when someone important dies, such as an emperor, their daily comfort and objects were buried alongside with them. “During the Shang and Zhou dynasties, people were buried alive in tombs with the deceased as sacrifices”[1] but were gradually replaced with sculptures and clay figures[2]. One important historical figure that took this form of tomb art to an extreme was China’s First Emperor, Qin Shihuang of the Qin dynasty (221-206 BC). In just one of the discovered pits, Emperor Qin’s mausoleum has “about 6,000 life sized pottery figures”[3] in the form of soldiers, horses and other figures where they were buried alongside with the emperor. It is astounding just how realistic the terracotta figures are as every single warrior figures have their own unique appearance[4]. This characteristic represents a kind of ‘Chinese Realism’[5] with great details going into their uniforms and physical. All the terracotta warriors were created above life-size and each figure have its own unique face, “suggesting they were drawn from life”[6] and based on actual people of different regions in that time period[7]. This essay will explore Qin Dynasty’s ‘Chinese Realism’ through the terracotta warrior sculptures of the General (figure 1) and Heavy Infantry (figure 2) by comparing their similarities and differences in their size and armor, and how those sculptural art elements played their part in representing military ranks and power.

These two terracotta warriors are similar in their body build and their lifelike sculptural style, their differences in height and garments indicates the importance of ranking in the Chinese military. While both figures have a bulky build to inspire awe and power, they are difference in height[8]. The Generals are known to be taller than their lower ranking brethren. This was the easiest way for the sculptors to imply the character’s significance, by making the General literally stand out of the crowd with their sheer size. The warriors’ military ranks can also be directed through their uniform. While both terracotta warriors sport a tunic under their armor, the General have an overlapping mail called the ‘fish-scale armor’ along with special tassels attached in front of the armor to denote their rank.[9] In contrast, the common Heavy Infantry don a similar robe but is instead covered by a big heavy piece of “armor covering his chest, abdomen and shoulders”.[10] The usage of scale and the accurate representation of the military uniforms point towards how the similarities and differences made it easy to identify the soldiers role in Emperor Qin’s afterlife army.

To further emphasis the idea of power and influence, the creation of the terracotta warriors employed a technique called ‘manner portrayal’[11]. This is similar to the ‘manner portrayal’ theory established by painter Gu Kaizhi of the 4th century that stresses the importance of the “manner and temperament”[12]. This practice can be felt through the calculated adjustments and exaggerations made by craftsmen to create an aura of authority and majesty. An example would be the elongation of the warriors’ thumbs to heighten the sense of strength[13]. According to United Nations Educational, Scientific and Cultural Organization (UNESCO), the terracotta warriors “are masterpieces of realism”[14], which no doubt were fashioned with a lot of care and devotion to details despite being part of a mass production. An example can be found in both the General and Heavy Infantry’s armor which was carefully constructed with great amount of details applied to the individual armor scales to match the real armor. Each of the figures also have authentic and expressive facial features such as a detailed beard on the General’s calm and bold look, while the Heavy Infantry has a moustache and carefully engraved short hair. It is also known that no two terracotta warriors are identical[15] and each of the terracotta warriors’ parts were made separately by many groups of craftsmen[16], which make it even more impressive how these components make for extraordinary sculptures when put together. 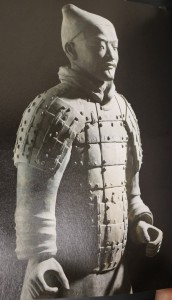 Nobody knows you are a cat on the internet. View all posts by Merlin →