What kind of learner are you

Honestly, I never knew what kind of learner I was. I get different results every time I do some test and I feel that I learn differently when I have different moods. Right now, however, I took some quizzes -> link.

As you can see…the results seem to vary widely. I suppose online quizzes aren’t really all that reliable (obviously). But I can perhaps derive that I am more partial towards the linguistic and logical learning style.

Personally though, I usually study by reading notes, writing notes, and doing examples, which is a learning style leaning towards kinesthetic.

After doing this exercise and thinking about it in detail, I find that there are lots of contradictions. It is probably not possibly to be only a few kinds of learner. Rather, everyone is every kind of learner, just more of some and less of others. For example, my usual learning style might be considered linguistic and kinesthetic, but in truth, (just quoting from the website, I don’t enjoy talking about things all that much (unless I’m comfortable with you) and I don’t do sports. People also tend to think that I would be a visual learner (since I’m in art school…right?) but I’m absolutely horrible at map reading and have 0 sense of direction.

Unsurprisingly, I think that the Buddha Tooth Relic Temple is one of the nicest temples in Singapore. It is a tourist attraction, so it is of no surprise that the main temple is beautiful, with many statues and artworks displayed.

My favourite part of the temple, however, is the museum. I find understanding and learning about the history and some of the habits and rituals interesting, as there are information there that cannot be found anywhere else.

No one really governs in the town of Revlis. The “governors” of Revlis are better known as the coordinators. According to the stories and legends passed down from previous generations…

Revlis wasn’t always known by this name. Before the world fell into eternal night, Revlis was known as Aeroth, and it was a huge place, possibly a thousand times bigger than now.

Aeroth was under the control of a mayor named Silver, who treated all like slaves and servants. In the days leading up to the event, the world was utter chaos (no one is really sure of what occurred), but within the chaos, Silver vanished. The world seemed to run as normal, but now freezing cold and without day. Everyone was still alive though, and when the confusion settled, the town was renamed Revlis, to celebrate the peace we thought would follow.

Just the opposite happened.

“There’s not enough food, please, help!”
“My house! It’s destroyed!”
“There aren’t enough storage space for the excess cloths!”
“I’m so tired…is there any place I can sleep?”

There wasn’t anyone to govern and rule over the town. It was gradually becoming more disorderly and disruptive among the people. The elderly couldn’t take the cold, the children starved. People started dying. Everyone was frightened and distressed, but no one wanted to take the lead.

Finally, two people stepped up. Now known in our time as the legendary duo, Lyra and Leoric made a speech at the plaza to request for the people’s cooperation. They were the ones to finally bring the town together, and live in harmony.

“We do not wish to rule over everyone, but looking at the state of the town now, we need to work together. There is an excess of manpower at some places, and a lack of at others. As we work as coordinators, we can decide which part of the town needs more help and assign more people to work there.”

“We will not force you to take part if you do not wish to, but our town as you can see, needs all the help it can get. If you care for the town…”

This is a more popular version of the story. It isn’t the only version. Whether it is true or not, the fact remains that we don’t have a mayor but we have a group of coordinators that oversees the essential work that needs to be done for survival.

Currently, there are 5 coordinators that people go to for help when needed. Feredar, for food. Onda, for healthcare. Una, for everyday’s essentials. Rick, for overgrowth of forest. Dazzle, for housing issues and maintenance. Any other complaints not under the categories can be made to any of them.

Donning on the long black robe I always wear, I glance at the mirror. The soft glow from the white orbs made me look kind of unfriendly. I let my jet black long hair fall and it covers my face. I leave the room to have a run.

My backstory? I was born without parents (I wonder what happened to them?…), and grew up kind of lonely. It has made me independent though, I don’t really need the help of others. I just have to be as good as I can in every aspect of myself. I start to run along the edge of the town, this is what I usually do everyday when there’s nothing better to do, I’m pretty fast on my feet now, I guess.

Ahh, I slow down and face the jungle. I wonder what it’s like beyond? The darkness seems to grow larger. An image of a strange black dull orb flashes in my mind for a split second. I run for a while longer and head back to my bed to sleep.

I don’t really like showing my face to people. Covering my face with a red hooded poncho seems preferable, I won’t even mind my side flip auburn hair being messy inside since no one can see it. I lie down at the top of my favourite hill under the only tree growing there. The grass is getting prickly again, it’s out of control and needs trimming.

Lying here alone is so peaceful. I always wonder why my parents abandoned me. I have never met them, did they meet me? Did they know me that’s why they abandoned me? There are always so many questions running through my head. Who are they? I know who everyone in town is. I can’t imagine my parents being any of them though… Sometimes, no matter how independent I am, I half-wish I still had grandma to look after me. She was just a random sweet old lady who wasn’t even related to me. But she’s gone.

“Aria!” I hear a call from afar. “You were supposed to be at the potato farm today!” The voice approaches. It’s one of the old lady’s friend who still tries to look out for me sometimes. Sigh, I don’t wanna help out, I just want to sit by myself and wonder what all this is about. I roll on to my side and curl up. There’s a red orb blocking my vision. I instinctively reach out to hold it in my hands.

I get up. I want a way out. I want to know what’s out there. I run to the edge of the forest and try to bash it, without a care of what there was. A hand tries to grab me and stop me. “Aria, you’re too impulsive. Do you not fear what can be out there?” I don’t, I don’t. Nevertheless, I relent and let her bring me back towards town. I water a patch of potatoes for five minutes before making my escape. I return to my bunk and fall asleep.

In your dream, you hear a strange thudding sound, and a faint cry of help. There is a soft scampering of feet and some shouts. You roll to the other end of the bed and the dream ends.

You wake a few hours later. Something feels amiss. There is a weird atmosphere in the air. There seems to be a lot more chattering than usual. You should be helping to trim the forest today, but you’re wondering what the occasion is.

What will you do?

[OOC] The above scenario refers to both characters. The houses you stay in are adjacent.

For more information and what you can do, check the original Lore and the Lore on housing. You can ask questions under the OOC tag.

For fastest response to questions, my line id is pinology, apologies if you don’t use line.

Revlis has a radial design. The trees surround the town in a circle.

Houses are placed near to the edge. There isn’t enough space to build everyone a house, so everyone lives together, usually 10 to a house.

The houses are made of mostly mud bricks, rocks, stones, as the community sometimes burns off the overgrowth with fire and they don’t want the houses to burn up in an accident.

There are wooden beds inside though, and their accompanying thin mattresses were filled with straw and the feathers of chickens. There are also other furniture, a cupboard for clothes, a table and some chairs.

The walls are bare of decorative and personal items. It’s mostly covered with just white orbs providing light plus a few other essentials like mirrors and shelves. There are red orbs on the floor aligned with the walls too.

For toilets, there is a small corner of the room that is blocked off by hanging cloth, and a pot. Everyone is required to pour out the contents into a hole at the very edge of town.

The town’s population is approximately a thousand. Besides houses, there is also: 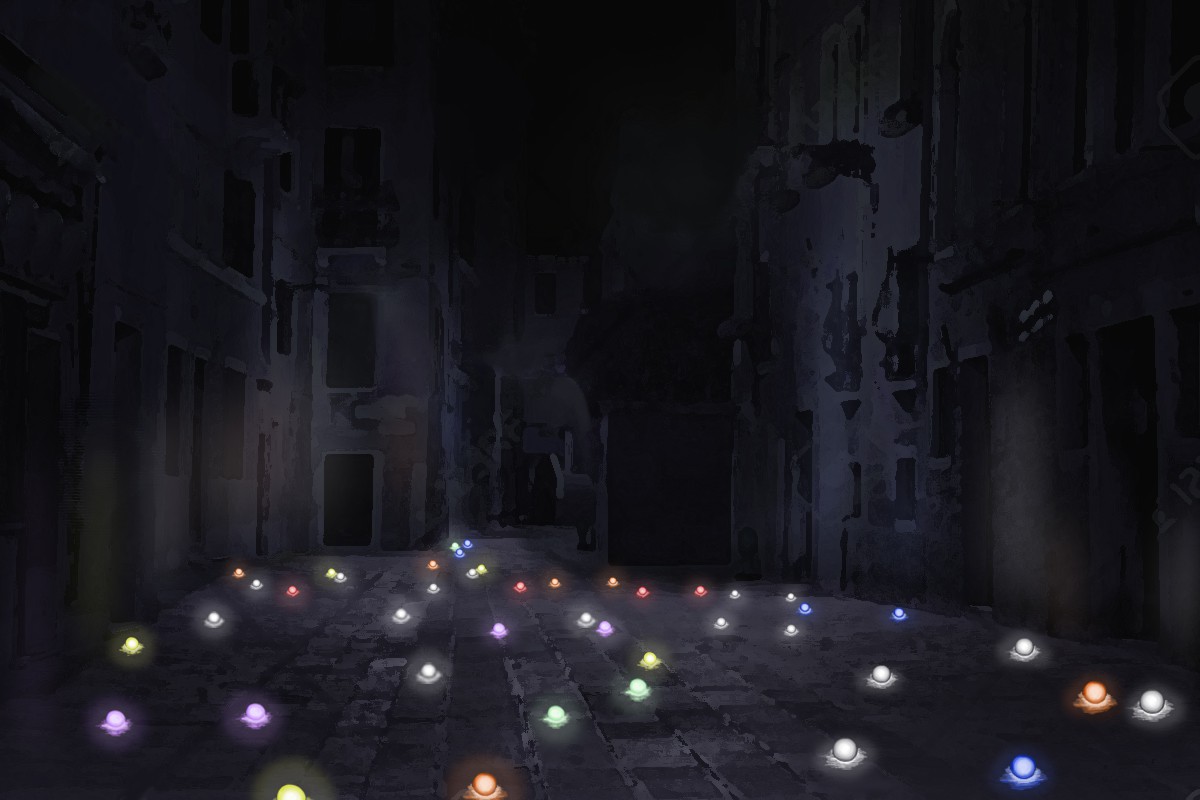 It was said that the world used to be a place with both night and day. I do not know if it’s true, nor if it’s real, but I do know that in Revlis, the sky is always dark and these glowing spheres light up our paths. I dream of a day where I could see day.
END_OF_DOCUMENT_TOKEN_TO_BE_REPLACED