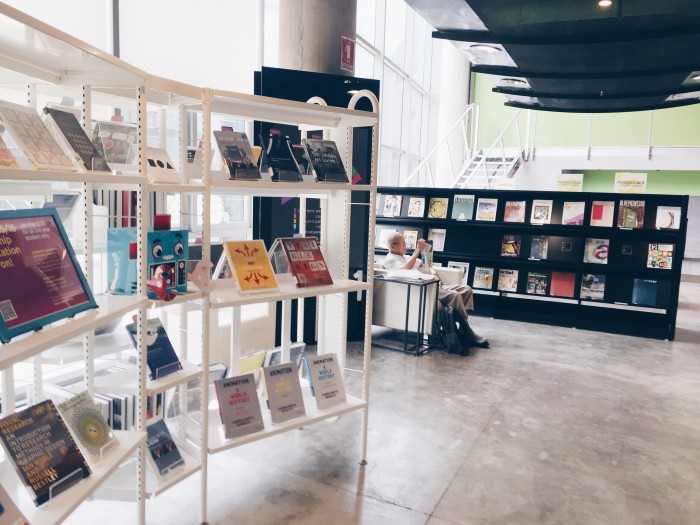 The furniture and fixtures that exist in the library are mostly clean and simple. At the studying area, the tables and chairs are mostly white. While the bookshelves are mostly black. The area was also occupied by beanbags and red sofa for users to read and spend their time in the library.

Here are some of the photos that I have taken in the library. 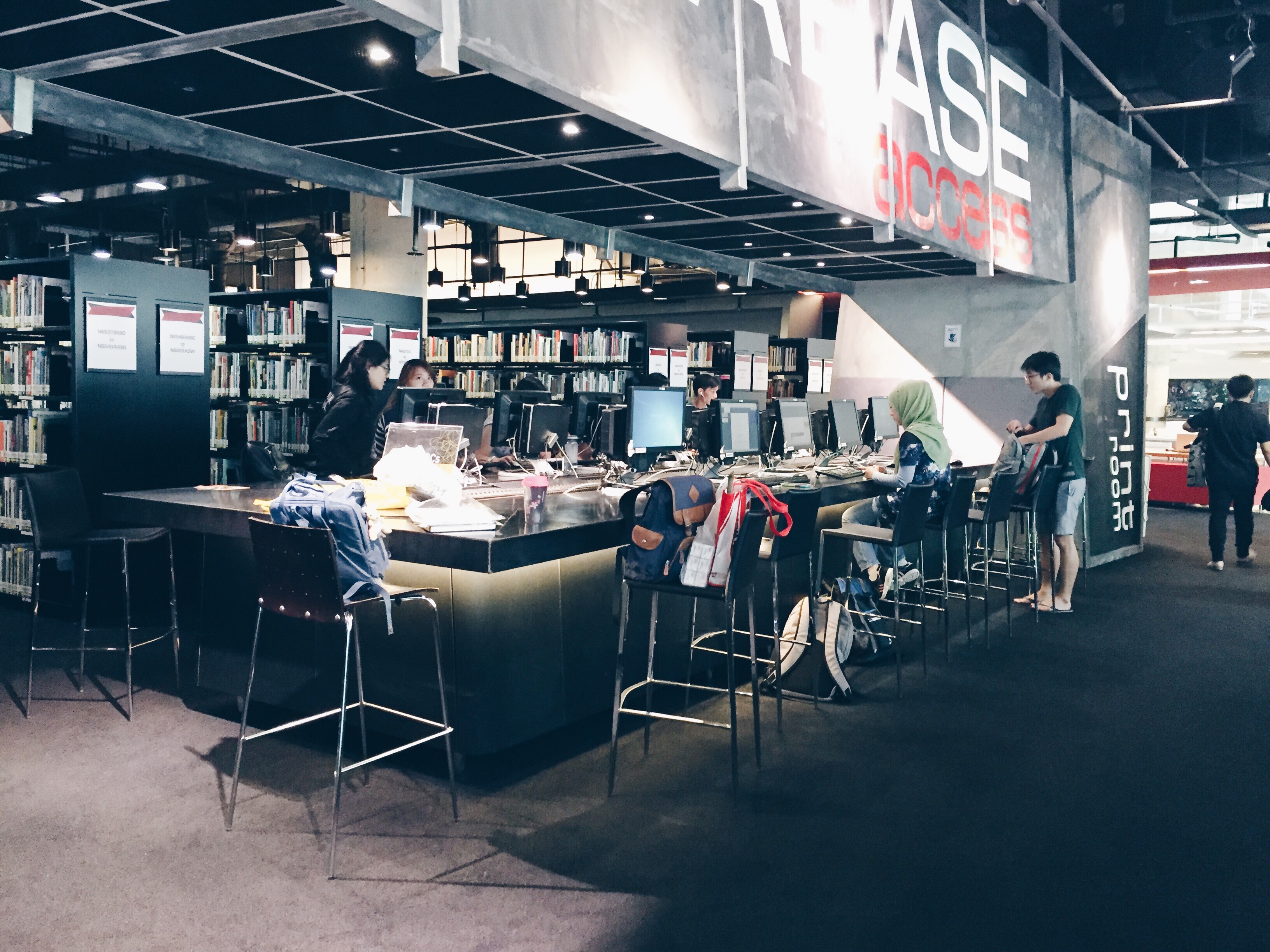 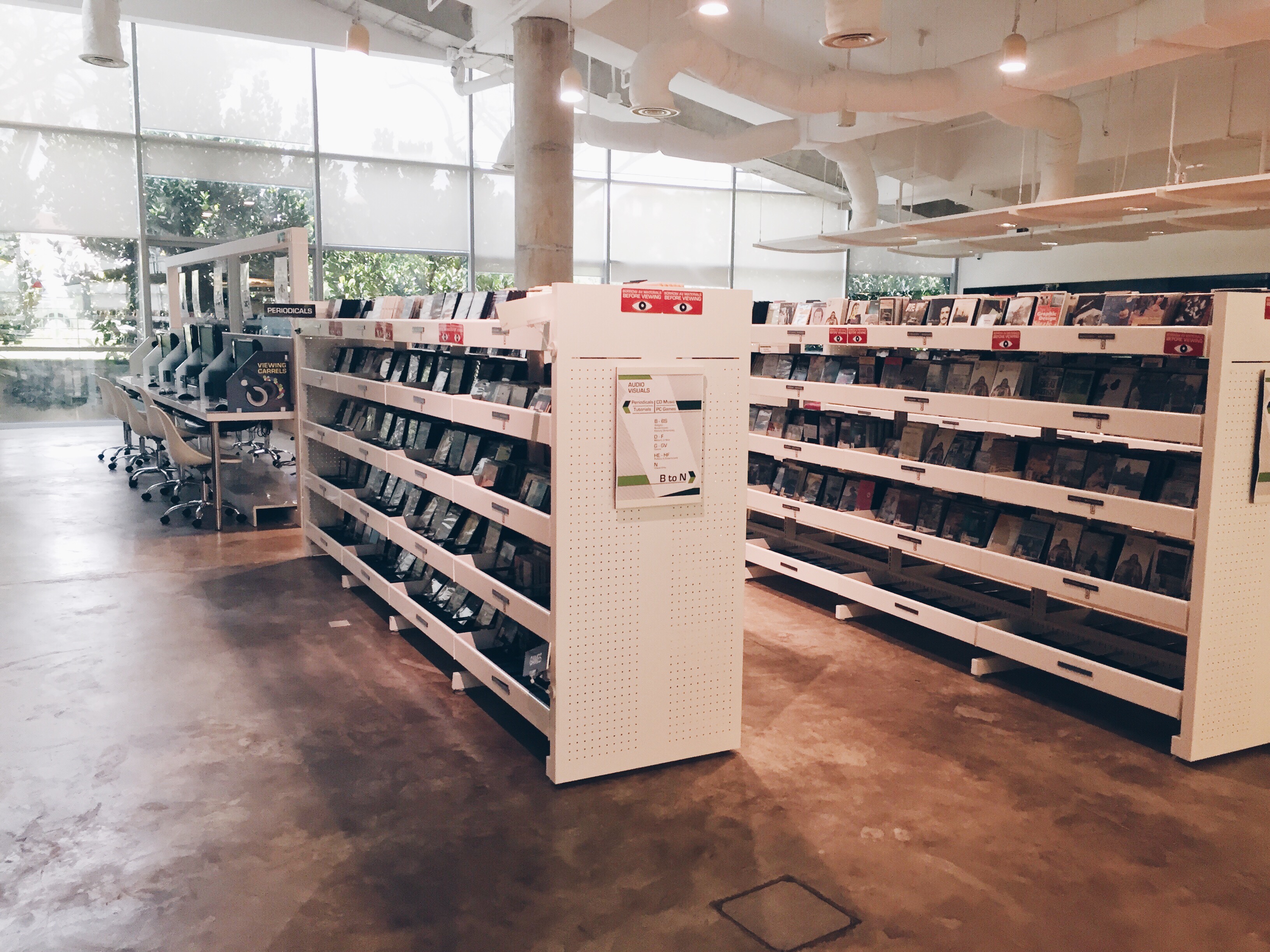 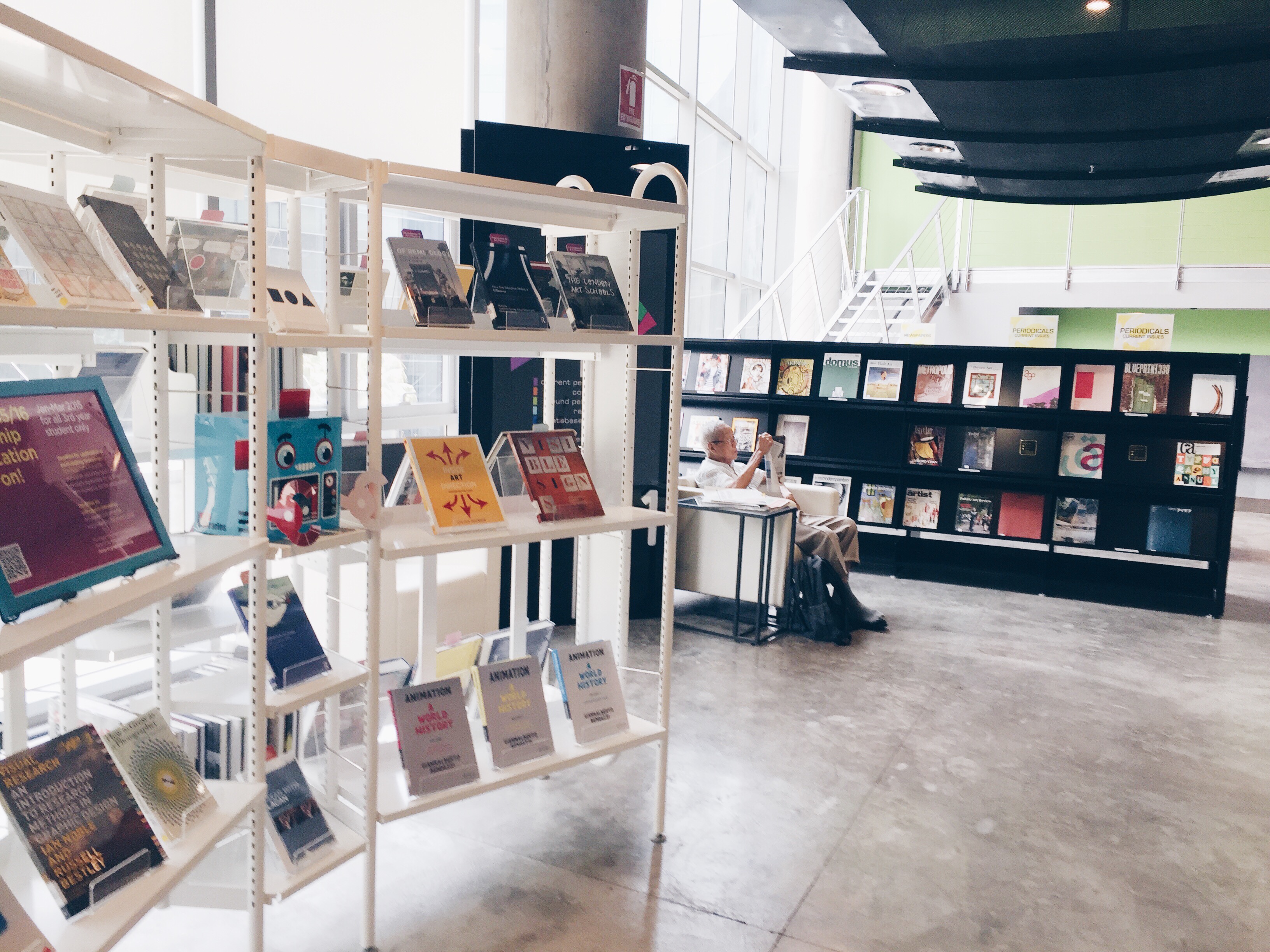 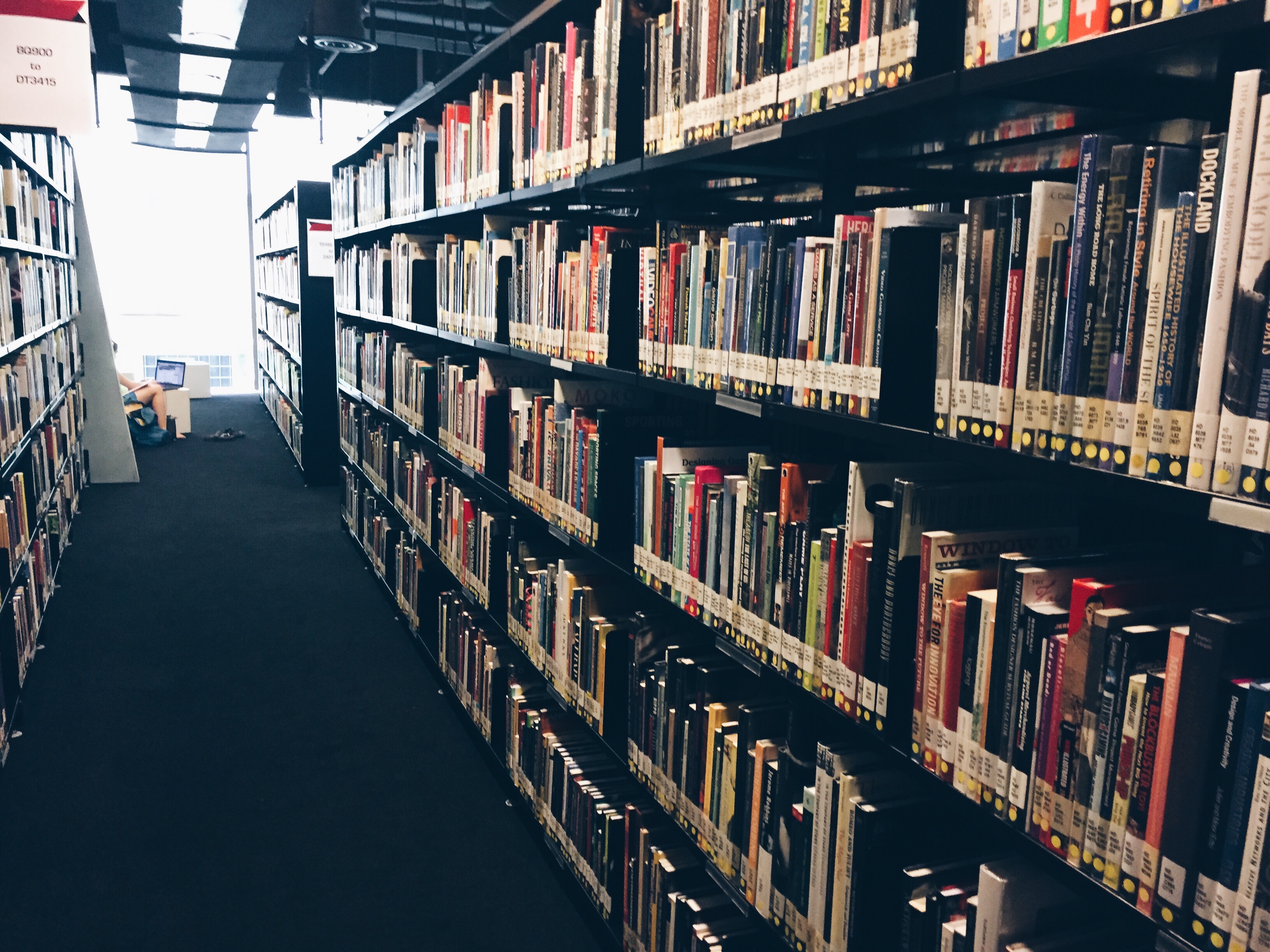 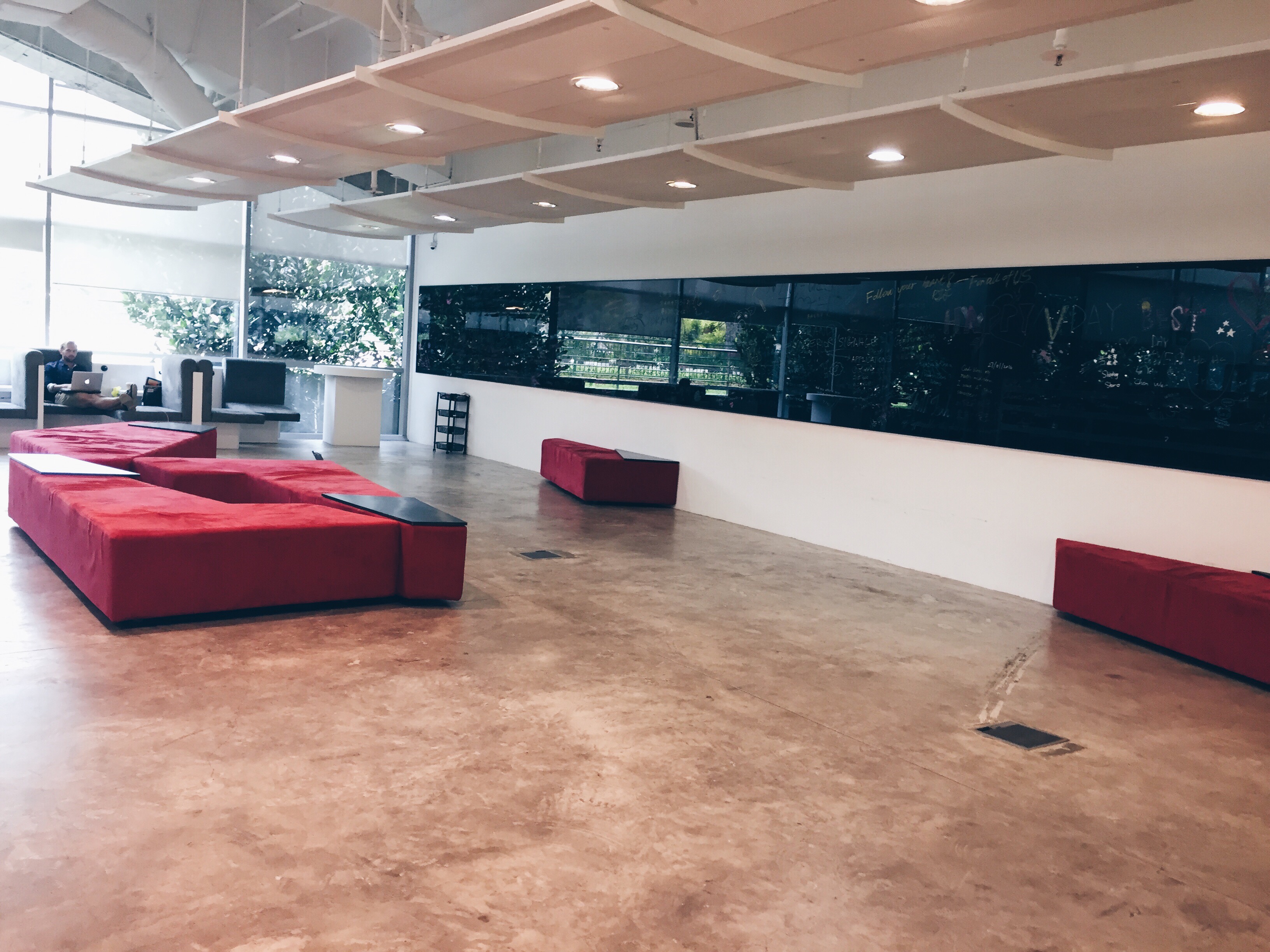 The place is mostly surrounded by students all over NTU. Some told me that they find the ADM library to be one of the best studying spot in NTU. They love it that it is so quiet and the lighting in the library is pretty warm too with natural light shining in during the day. If not for studying, the students would be looking through the bookshelves to view at the books that interest them or to look for a particular book.

The people there are usually quiet and they sort of exist in their own world studying. This is because the library is really quiet. When you speak, it is really clear. Hence, the students wouldn’t want to disturb the others. Usually the people there would whisper and do minimal movement.

In the process of research, I am pretty interested in getting to know what the students are feeling at the point of time when they are studying. Some could feel angry (because they could not solve the questions on their paper). Some could feel happy (because their work is on the right path and they are looking forward to complete it. Or some might also feel stressed because exams are coming soon.

I recently visited an exhibition called SingaPlural 2016. The exhibition showcases the best design elements from the multi-faceted creative spectrum and there many amazing installations that encourage the audience to interact with the artwork presented. I was particularly intrigued by an artwork. 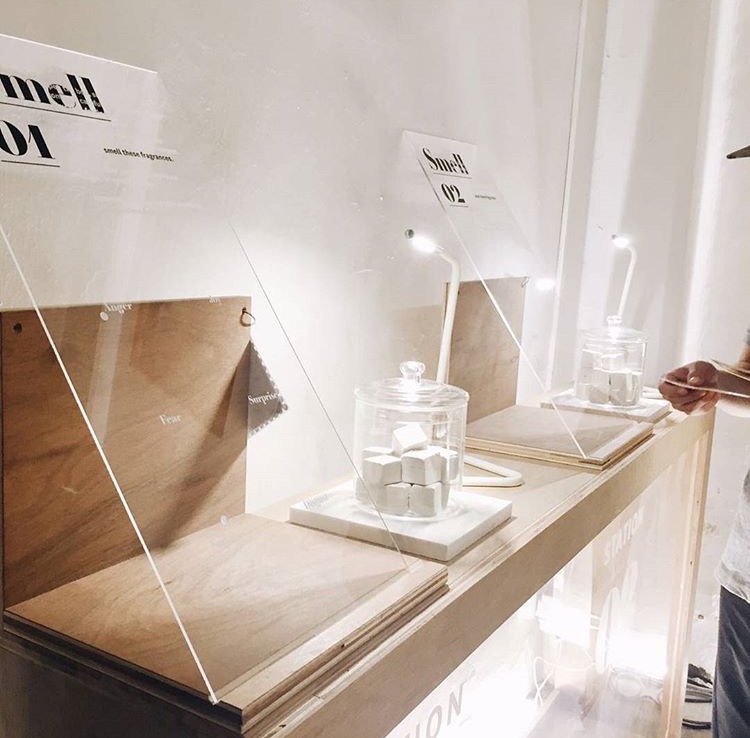 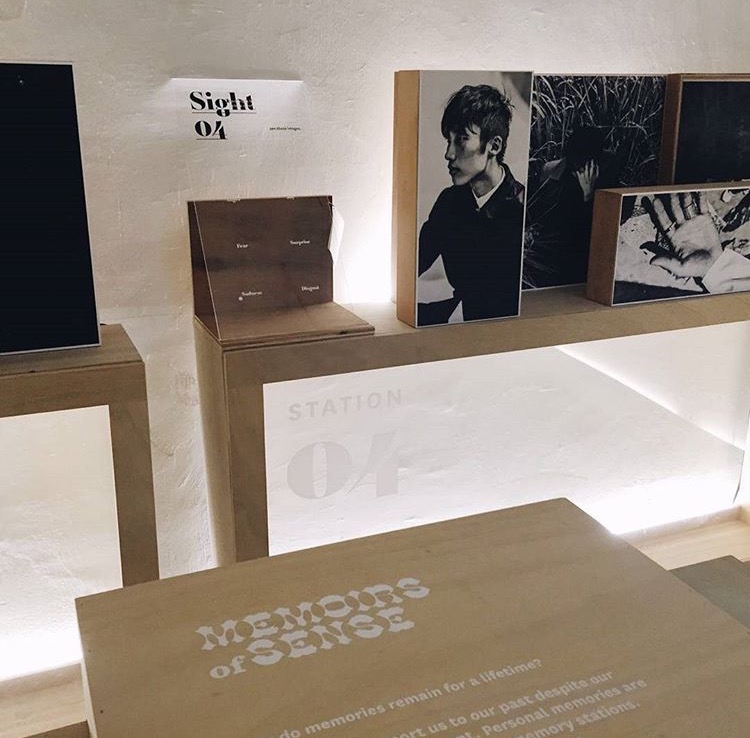 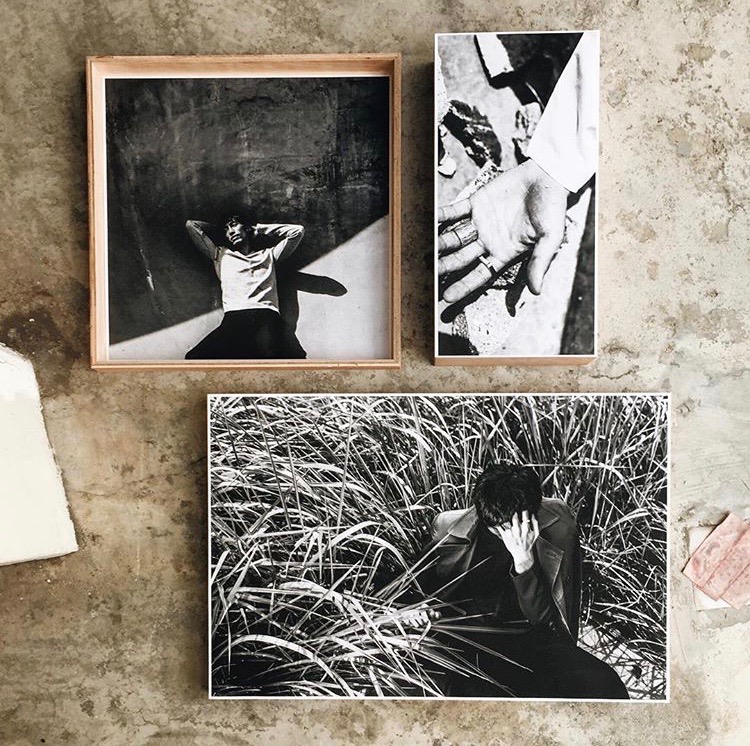 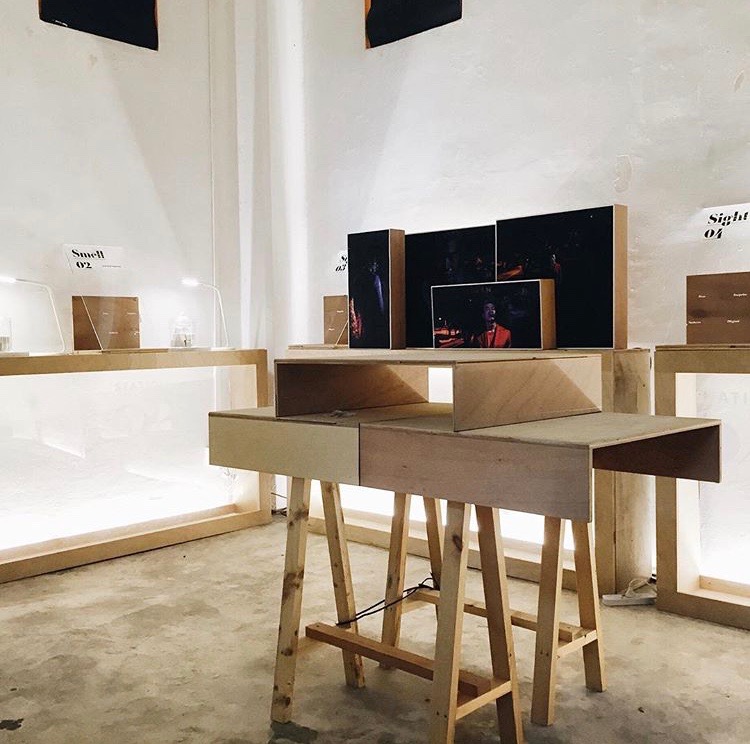 “How do memories remain for a lifetime? Recall can transport us despite our awareness of the present. Personal memories are reimagined through sensory memory stations. This immersive experience examines the persistence of memories through triggers of Sight, Sound and Smell.”

The work encourages the audience to use their senses to feel the object and based on their interaction with the object, take a piece of small round sticker provided and paste it onto the board. For example, the audience is required to approach a jar filled with flowers. Pick it up. Smell it. And based on their past experiences, and mood and perception, derive a feeling. Take a small round sticker provided and paste it on a board which include feelings like “Happy, Sad, Surprised, Angry’. I felt that this piece is pretty interesting because different people are made up of different experiences and past. Hence, when the stickers accumulated, viewers and audiences and see how certain smell, or visual resonates with most people.

I have a idea in which probably when the students approached the work, they could first indicate their current mood. Then view certain visuals that I put up, and smell certain scents before taking a small sticker and paste it on another board. They can see if their mood changes based on certain visuals. The visuals could be something disturbing, outrageous, peaceful. The smell can also range from calming to irritating to awakening (eg. coffee smell).

My vision would be to help the students to engage in something interaction and engaging. A point to visit when they’re stressed out from studying or reading. I also want the audience to question the reason for the feelings generated after interacting with the visuals or scent.

Upon further research, I had another idea. Talking about timeout and reflection. During the class discussion on Monday, I heard from some classmates about their opinions on the ADM library. These are my findings:

I want to create something where audience can interact with the artwork. I want my audience to reflect their experience of coming to the ADM library and think back whether their time spent in the library is useful or not.  I thought of creating a Instagram poster. It measures 1m x 1.5m. It will be pasted on the wall with a cutout in the middle. I will place a mirror instead where users can take photo of themselves. The comment section below the mirror will have something like,

For example, “I spent 30 minutes studying in the ADM library. #proud”

There will be numerous tags that the audience can paste their tags on the poster.

After which, they will take a photo of it and most probably upload it to social media. 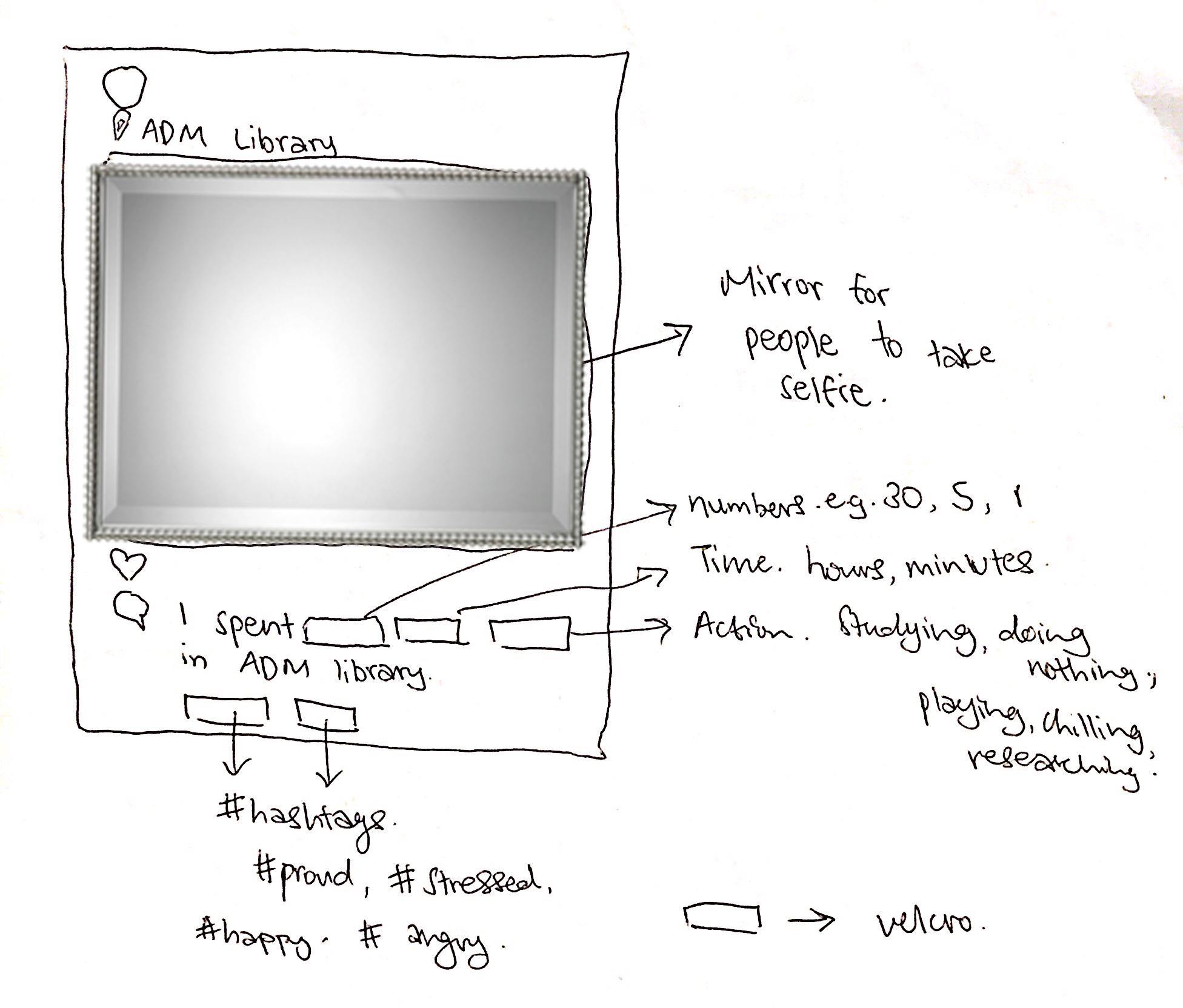 Based on the frequency of students using social media, I have a feeling many students will make use of the medium to post their actions in the library. Some may be proud that they spent 5 hours studying the library. This art work also kind of become an activity that the students can do when they are bored in the library.

I am thinking of placing the installation here. 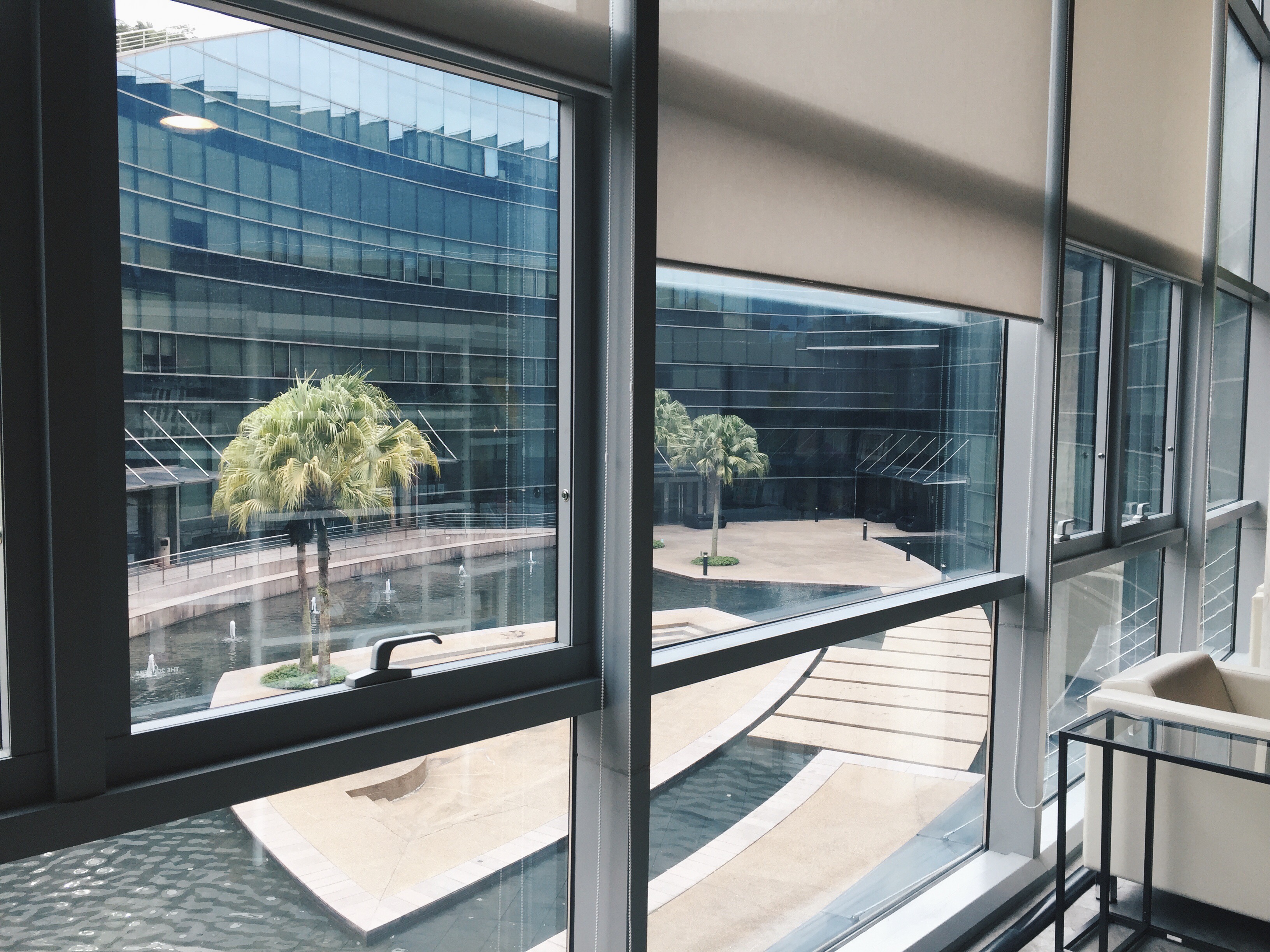 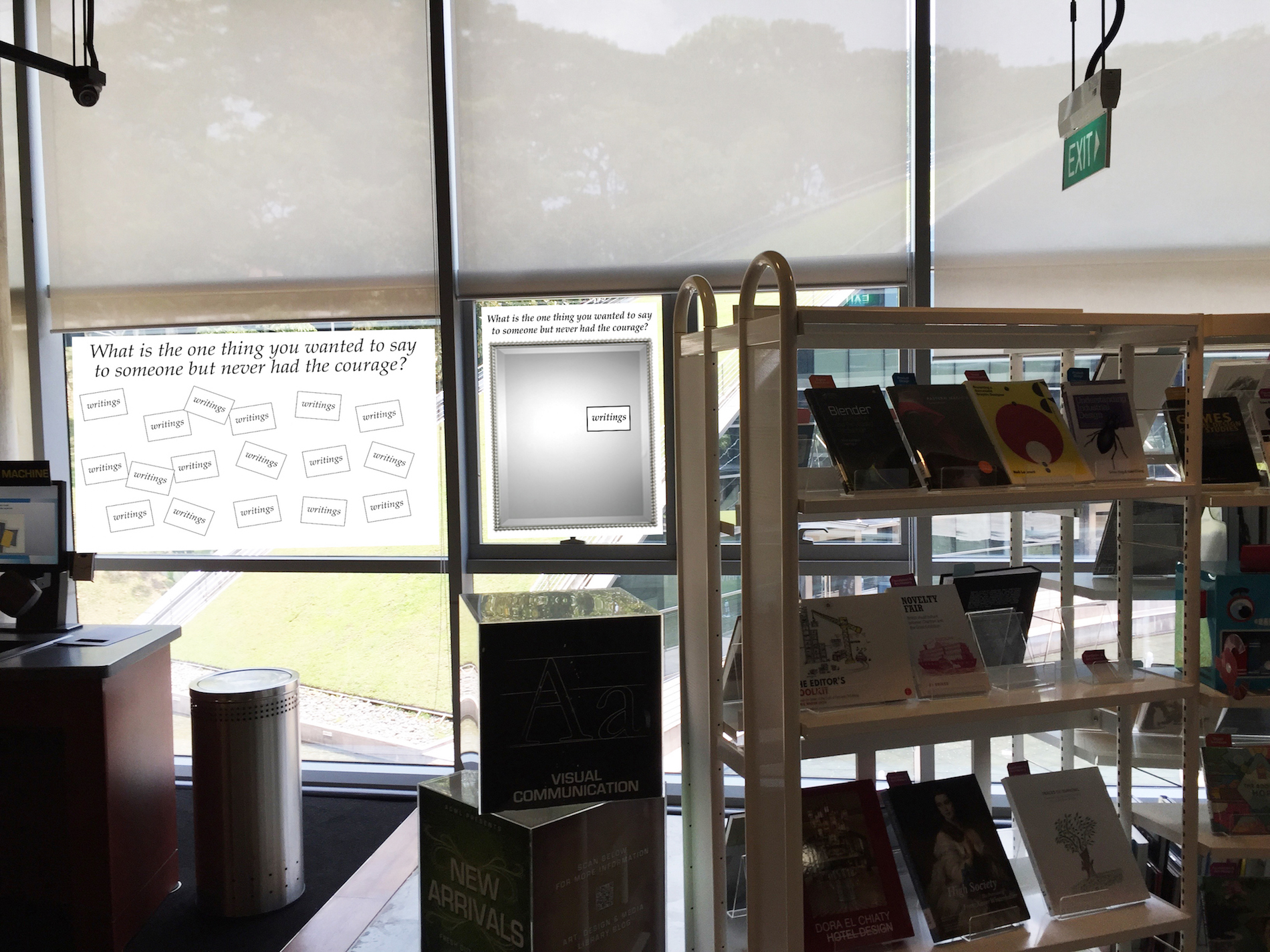 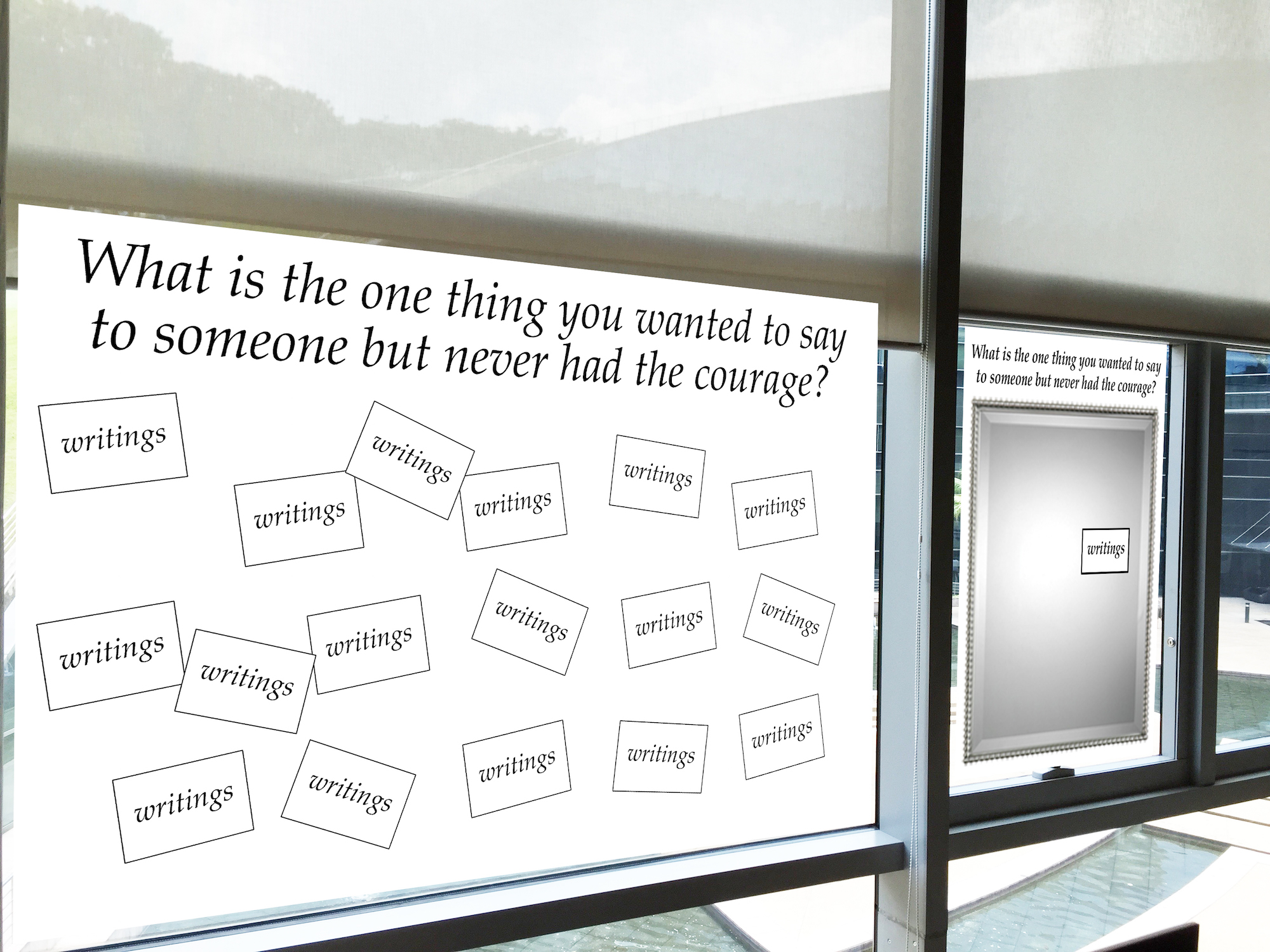 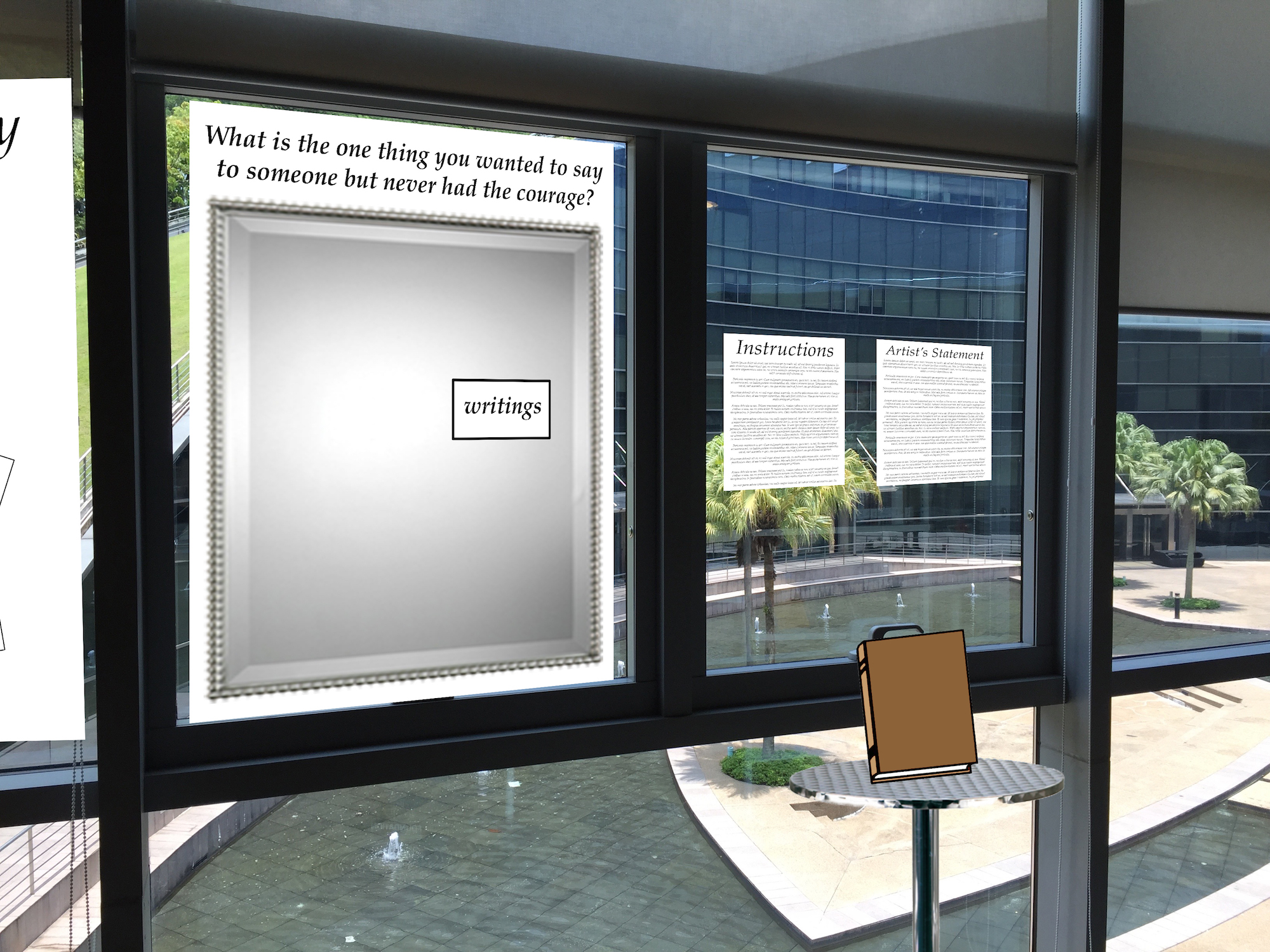 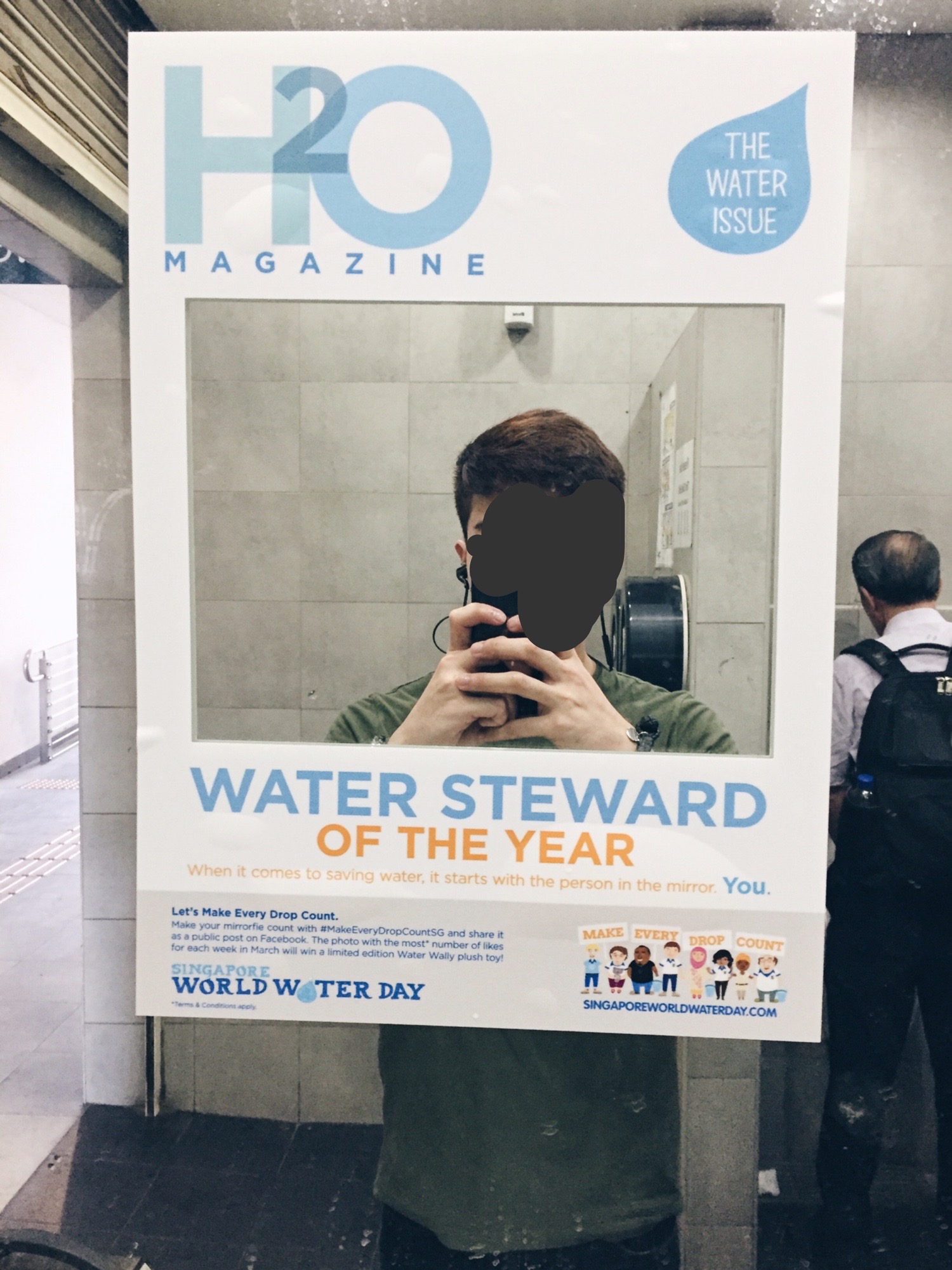