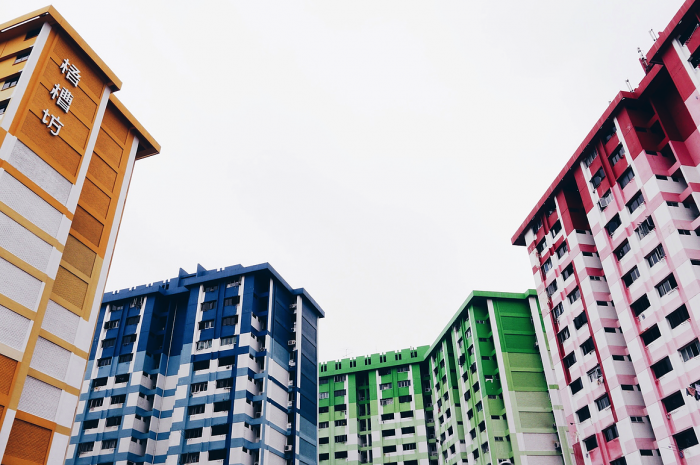 My parents used to own a furniture business in Rochor Center. They started business since 2004 (14 years ago) and they befriended many residents of Rochor Center through the years.

I used to visit the shop every weekend and would order coffee while I ate my favourite fishball noodles. In 2016, we were told that Rochor Center will be demolished for redevelopment, in preparation for the upcoming North-South Corridor. Residents were offered the Rochor SERS (Selective Selective En Bloc Redevelopment Scheme) where compensation were offered for the relocation.

“They (The residents) will have the opportunity to move to a new, 99-year lease home and will be given a package comprising compensation and rehousing benefits.”

The North-South Expressway—originally conceived as a 21.5km expressway to connect towns in the North to the city centre—is being redesigned as North-South Corridor to better enable cycling and walking. The NSC will be Singapore’s first integrated transport corridor featuring continuous bus lanes and cycling trunk routes.

The shop owners, including my parents and residents were given notice to find new locations. Rochor Centre is made up of four Housing Board blocks, each painted mainly in red, blue, yellow or green, and was one of the few remaining landmarks from 1970s Bugis, where sailors, and transvestites  could be found before the area was  developed further  in the 1980s.

The residential and retail complex, originally home to 183 shops and 567 households, was completed in 1977.

(Extracted from The Straits Times, https://www.straitstimes.com/singapore/demolition-of-rochor-centre-to-begin-on-june-26-in-preparation-for-north-south-corridor)

Rochor Center left a great deal of memories for me because I used to take the bus from my house to the place just to find my parents. I used to study and explore at the area and my family would return to Rochor Center every Chinese New Year just to visit our shop and take photos. Prior to the movement, I took several photographs of the location for memory keepsake. 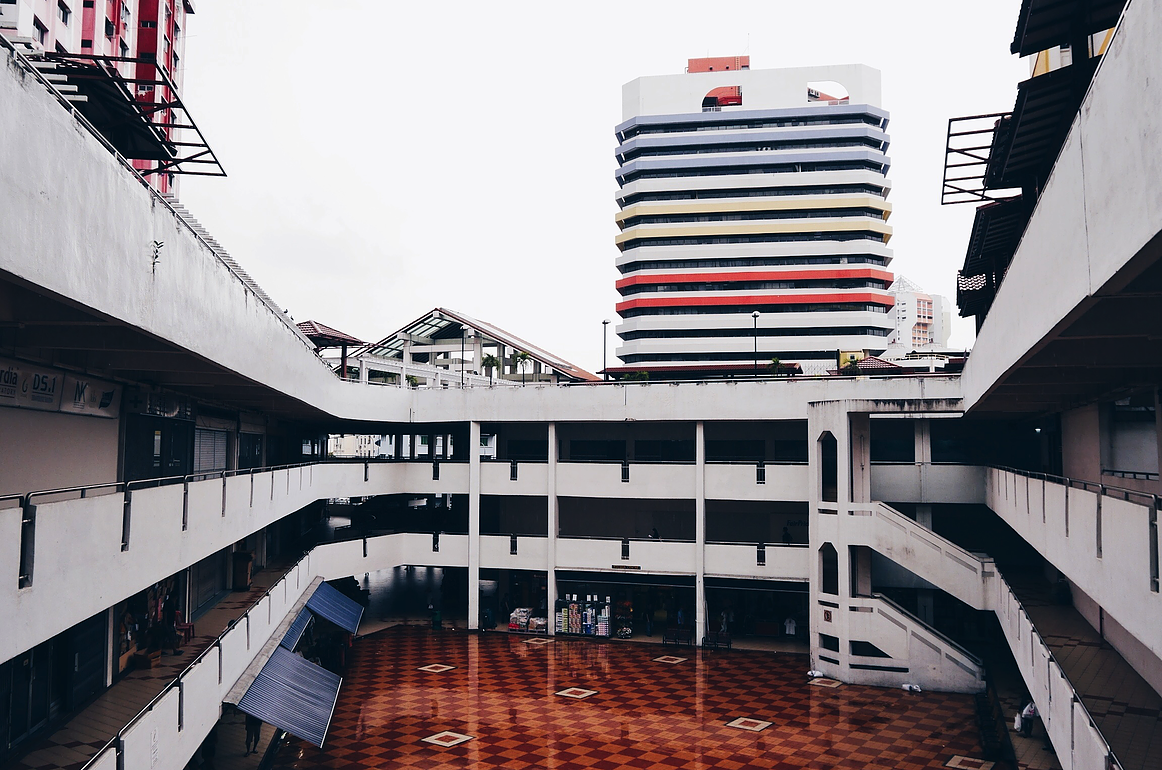 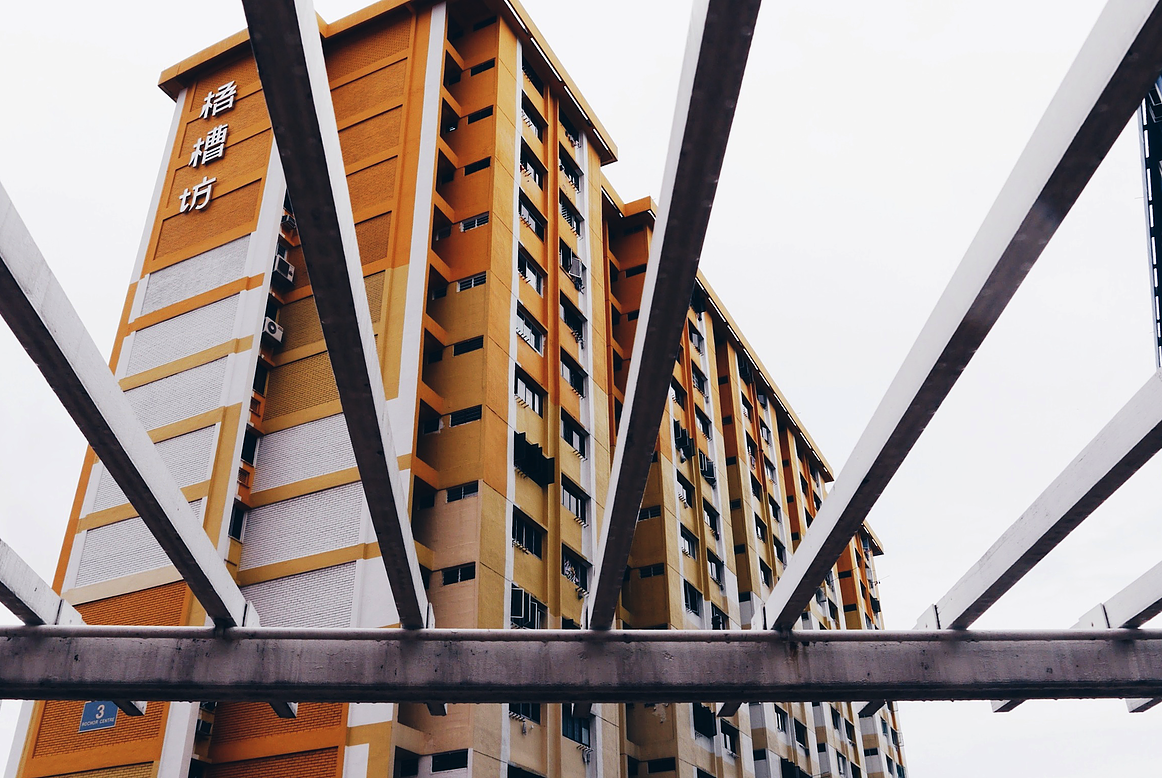 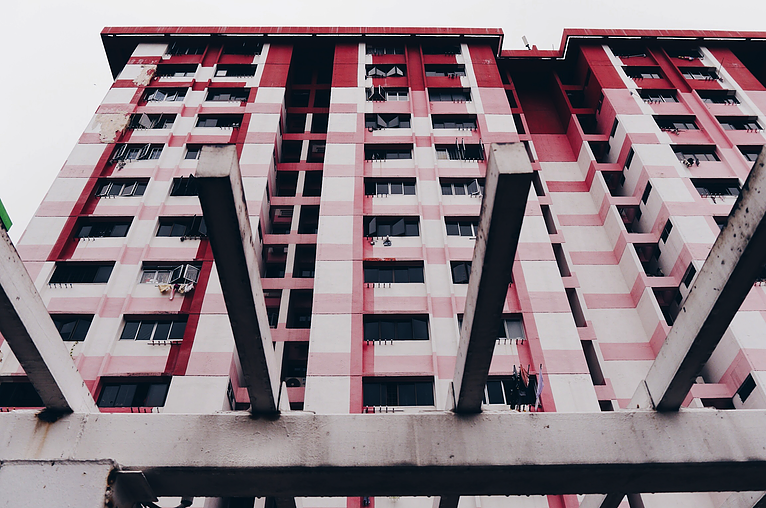 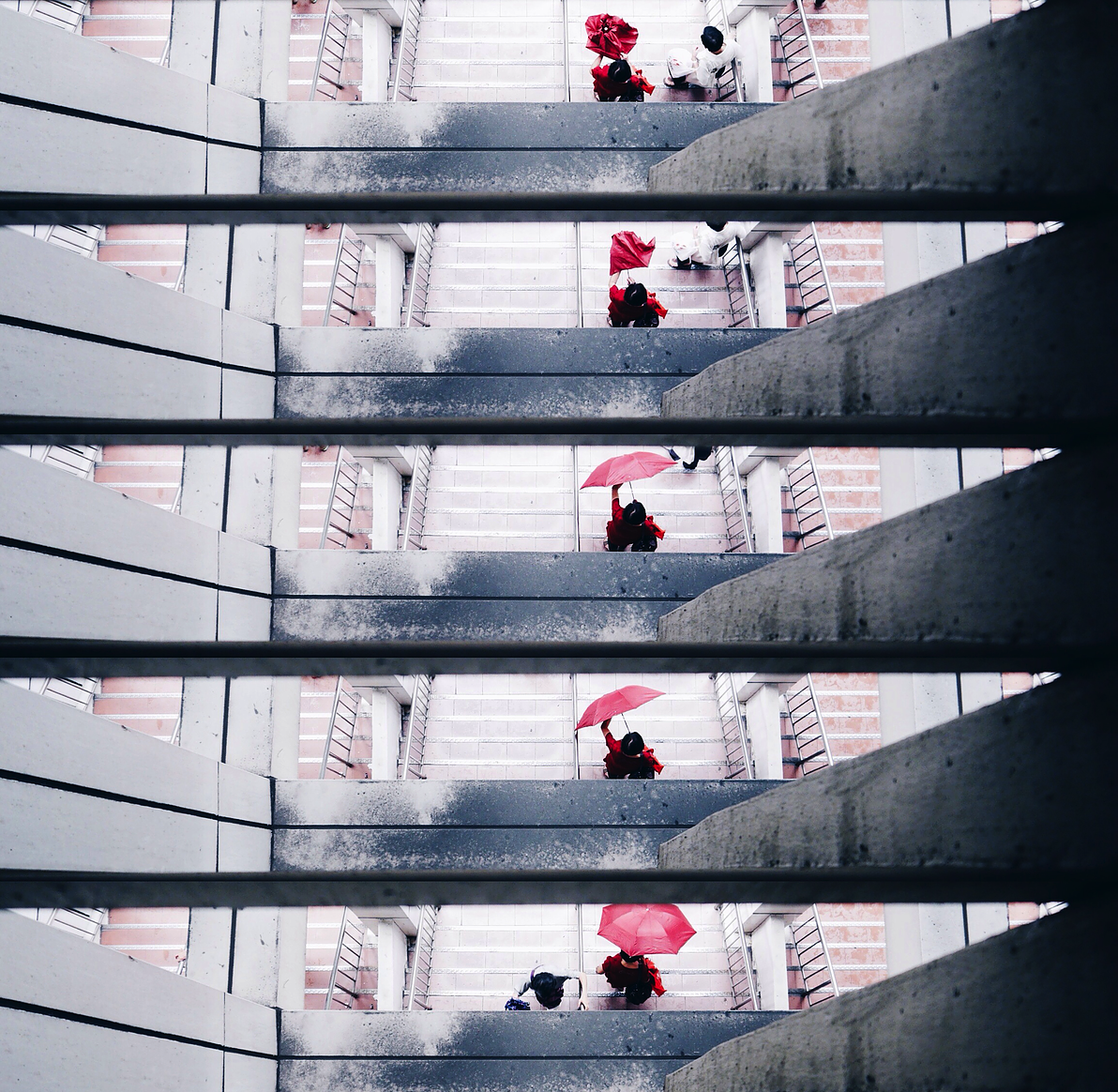 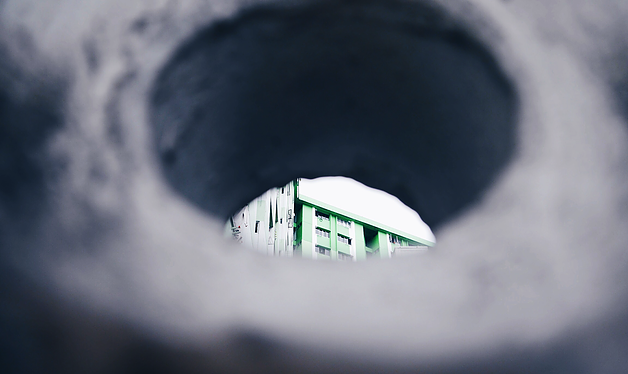 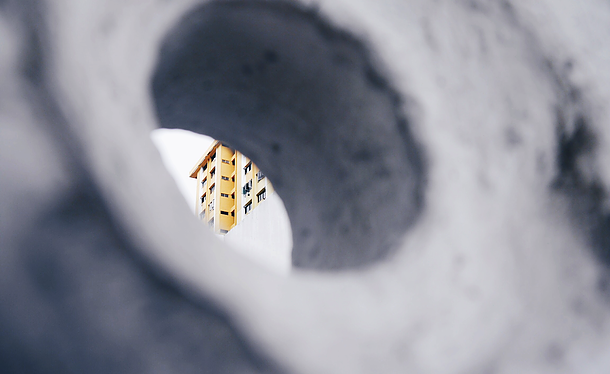 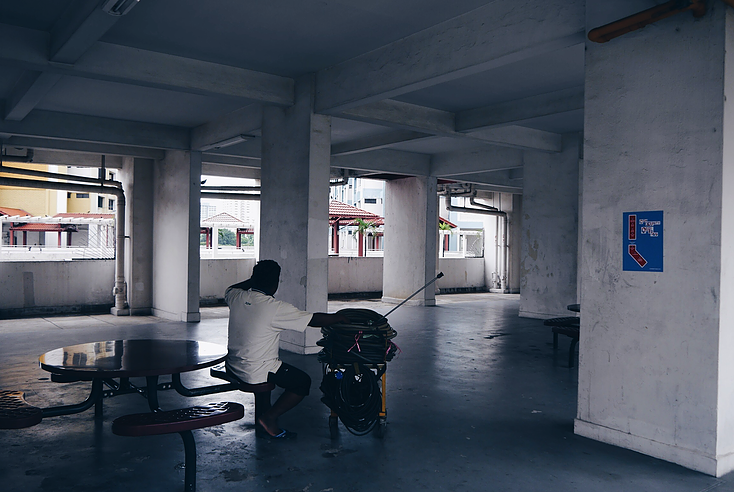 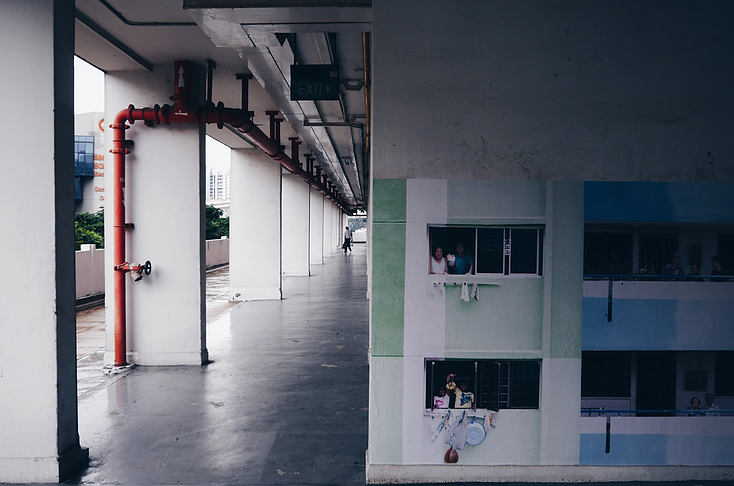 As the date of withdrawal came closer, I took another series of photographs. This time, to show the emptiness of the buildings. Most of the businesses have left and relocated and the quietness of the environment was slightly haunting. It was a vastly different from what it used to be like: blustling, crowded and full of energy. I love Rochor Center so much that I made a video of Rochor Center and I interviewed my parent’s employee and our business neighbour about their feelings towards the demolishment of the place.

Following the demolishment of Rochor Center which happened on ‘June 26, 2018’ (The Straits Times, 2018), the rainbow building became nothing but a fond childhood memory of mine.

I’ve always been interested in places with symbolic meaning, just like everybody else. A place whom one resides in for years form part of an identity for that person. Besides Rochor Center, another place that is on the risk of being removed from the face of Singapore is my grandparents kampong house in Lorong Buangkok. I’ve always been proud of their house because it is exclusive, unique and I grew up witnessing the house gone through the test of time and government urban planning. ‘Currently, 26 families live on the land, each paying a monthly rent of between S$6 to S$30.’ (Today Online, 2017)

To date, the house is one of the last few kampongs in Singapore despite the country developing so rapidly into a metropolitan city. 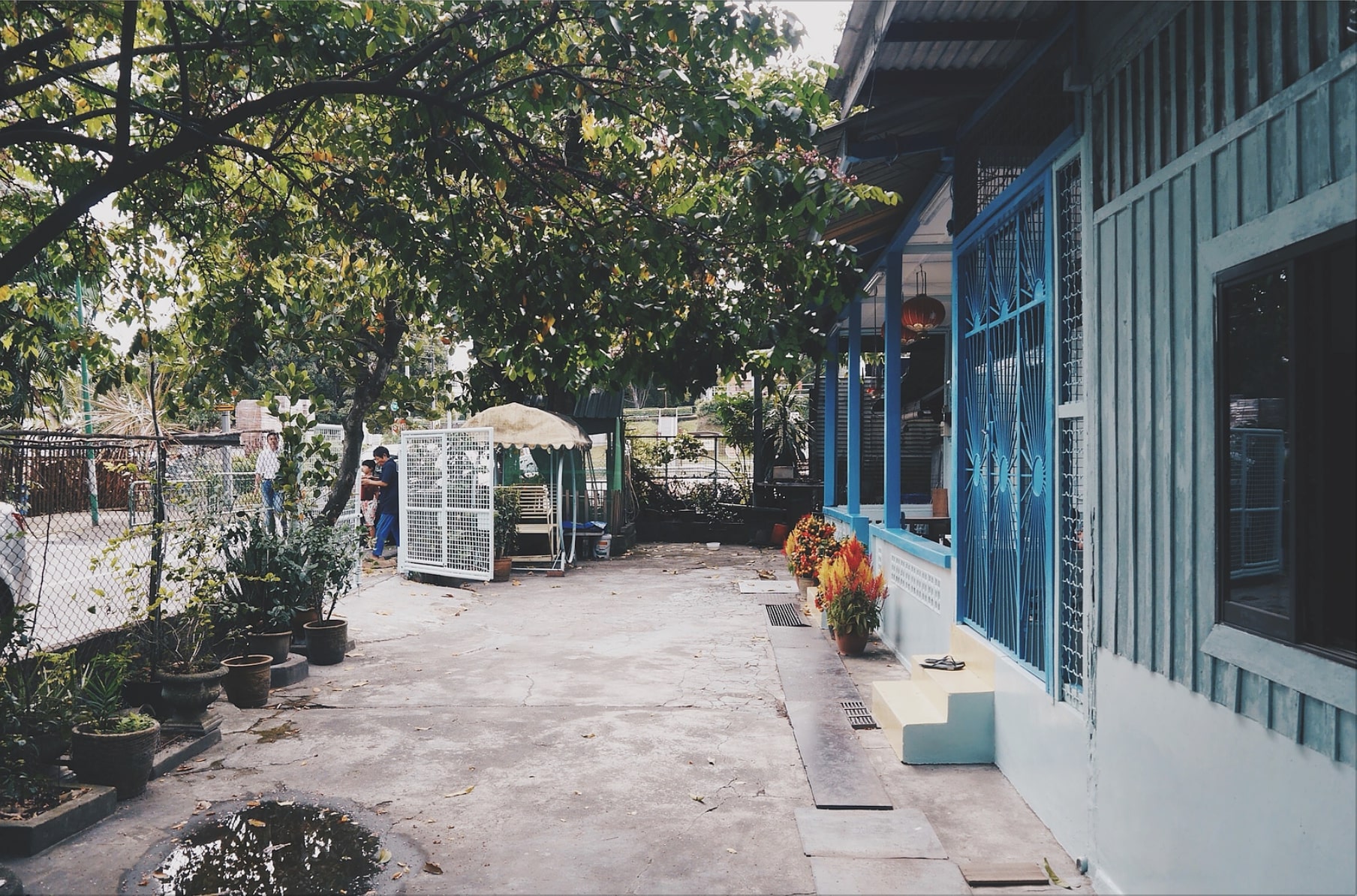 Courtyard of the house 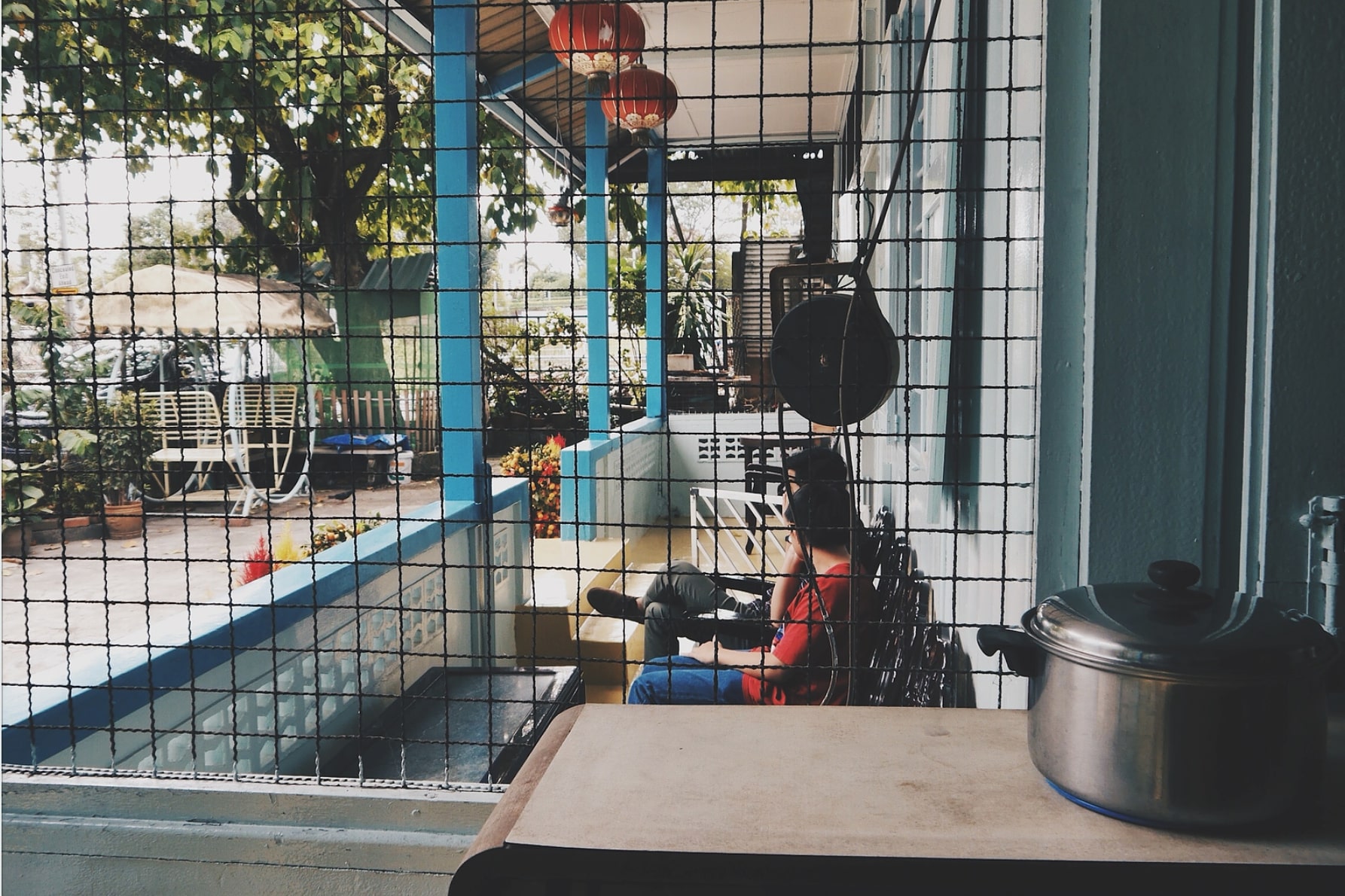 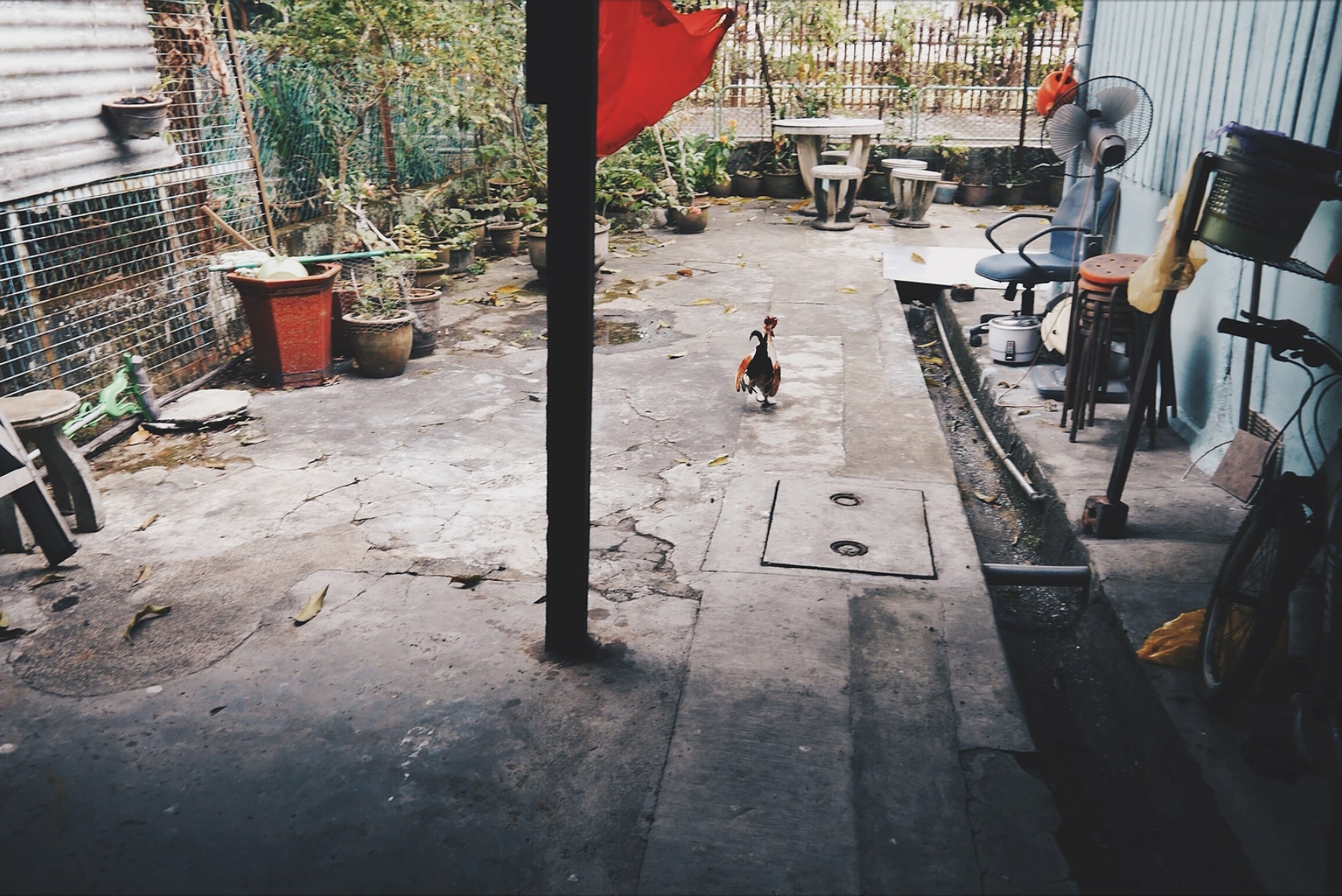 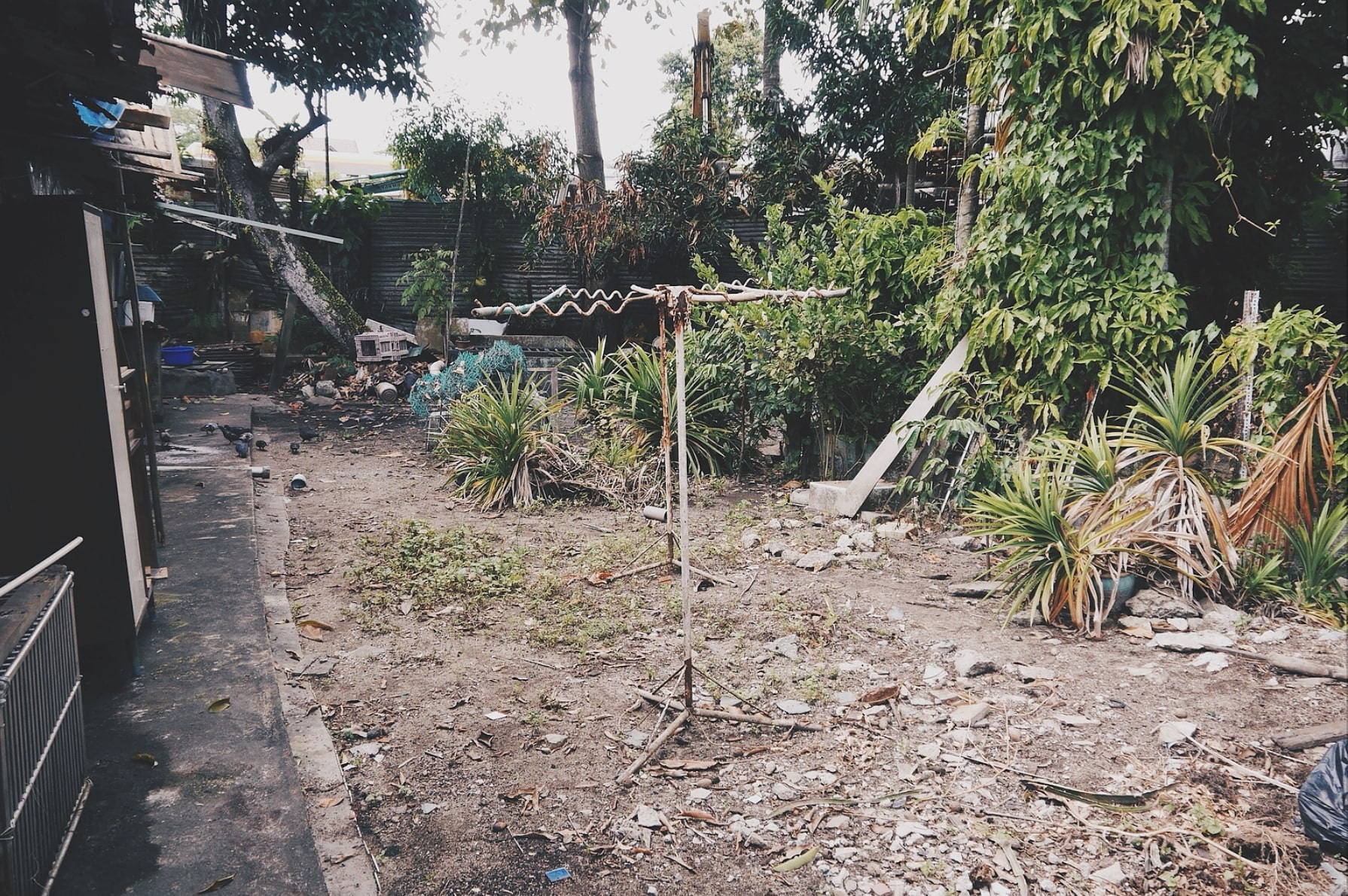 Old school swing that my siblings and relatives would sit on while we talked about our lives. The stray dog that became a pet of the house 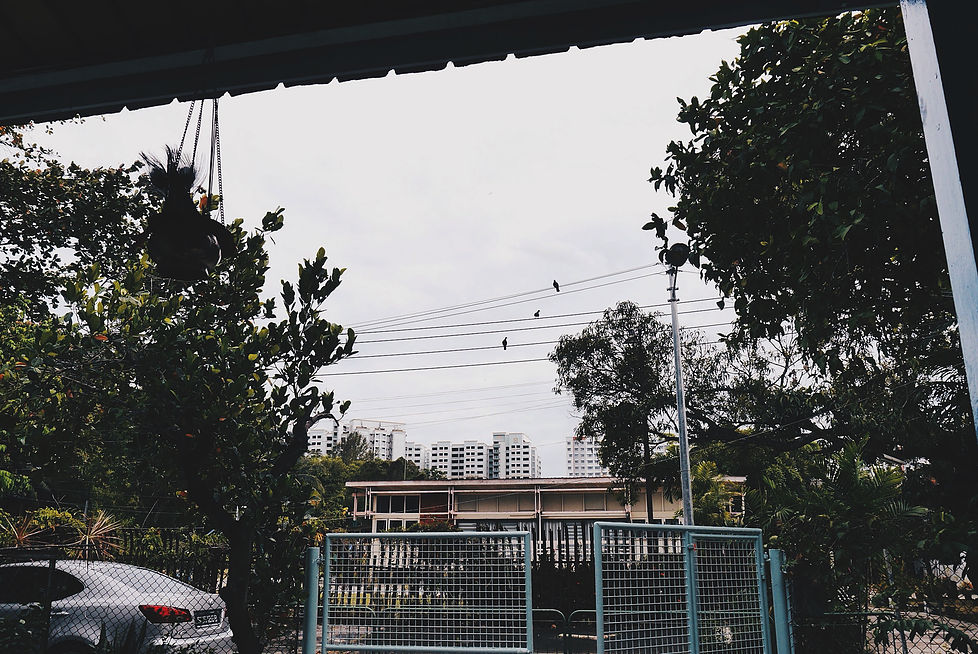 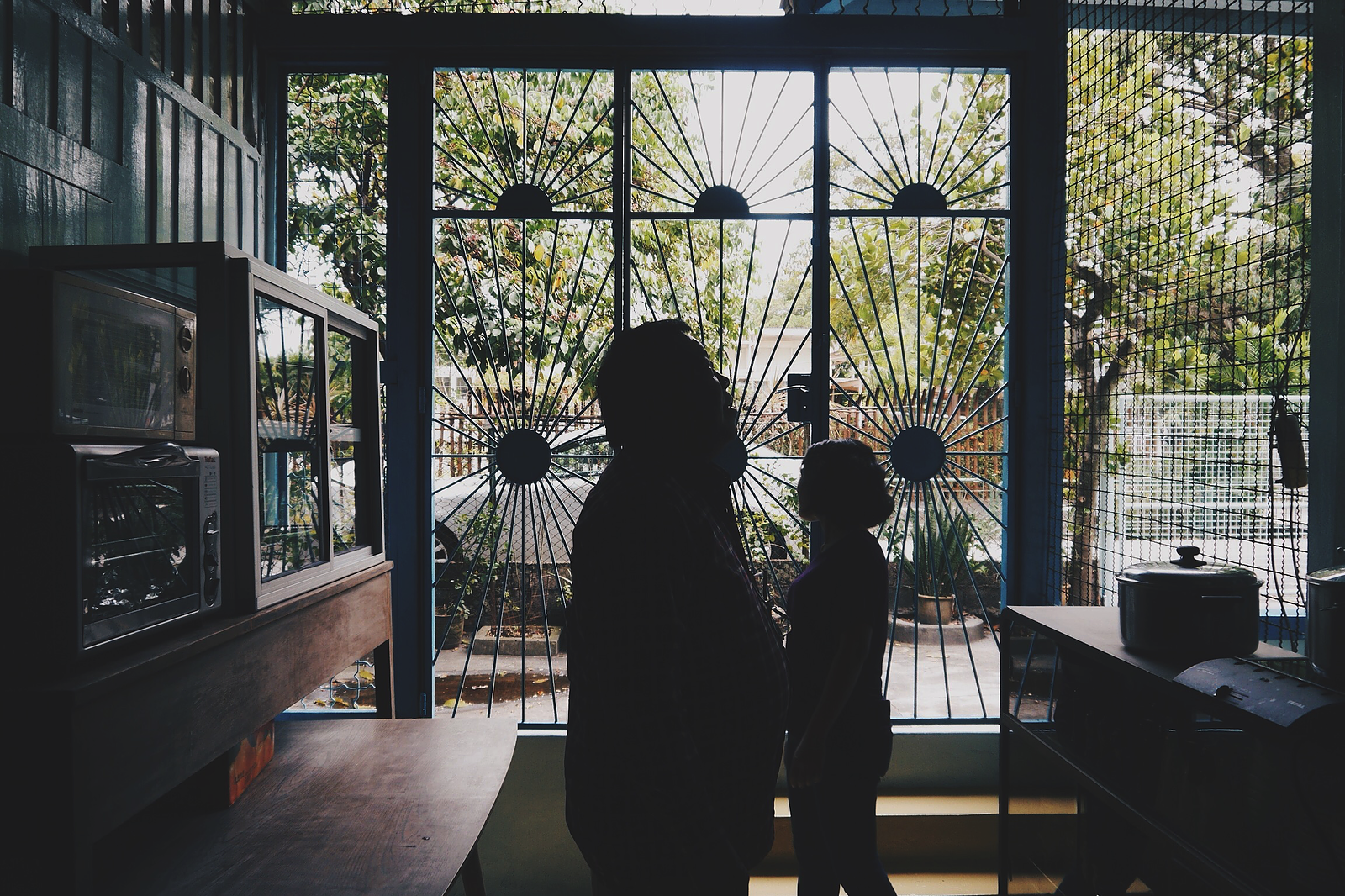 My father recounting his childhood memories to my domestic helper Every Chinese New Year, my family and relatives would gather and celebrate the holiday. The old house became a spot for gatherings, rekindling and bonding. Despite the availability of new electric stoves in the house, we would still use charcoal stove to cook the dish ‘Braised pork with bamboo shoots’. Unlike in HDBs, there are no trash bins that is readily available to be thrown into the main garbage system. Instead, makeshift basket with plastic bag wrapped on top of it is placed outside the kitchen for easy rubbish disposal.

In addition, I made a video back in 2016 of the kampong and the relationship between me and my grandmother, who have unfortunately passed away in 2017.

For many of us, Singapore is home but how much do you understand it or think about your relation and opinion about this place where you spend most of your time living here? Through the years you developed relation with people, places, objects and establish the way of life. These relations gave meaning, shape your identity; grant you a sense of belonging. Sometimes these relation challenges you. What is your feeling towards this place, people and culture? In what way have these relation affected you? How do we disrupt the everyday to excavate stories about people, places, our surrounding, way of life or even ourselves?

22 tells the story between my grandmother and I. Set in Lorong Buangkok where my grandparents have been living in the kampong for almost a century. It reflects the intimacy and tension between myself and her against the house as we converse about our lives, and the kampong house. In this film, I seek to explore the depth of our relationship and try to fathom what it feels to be in a place that fills with so many memories even though there is lack of strong physical connection. The film allow the exploration of silence and space together with conversation and close interaction.

Growing up with the house, I’d hate for the place to be demolished and replaced for urban renewal. To my relief, the plans for urban renewal will only happen ‘several decades later.’ (Today Online, 2017) and the ‘kampong could be integrated within the future schools and be a “community living lab” for students to learn about shared history, culture and traditions.’ (Today Online, 2017)

Moving on, I decide to explore more on pioneering landmarks in Singapore that are on the threat of being demolished. I asked myself, is there an instruction manual as to the ethicality of building demolition? Is demolition seen as a pro or a con? It is a controversial issue. Urban planners would argue that removal works is essential for the expansion of new buildings to accommodate the growing population in Singapore, yet conservationist persist that the clearance of old heritage sites would result in the loss of culture, history and identity of Singapore. As a millenial, I agree with both sides. However, I personally feel that there should still be a few iconic landmarks that should be preserved for the future generations’ understanding and education on the history of Singapore. My work produced for this project would not be a controversial piece demanding for attention for the place. Instead, I’d want to raise awareness on the presence of such places and the memories that it held for its occupants.