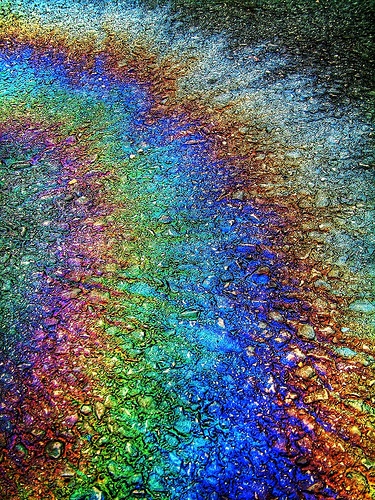 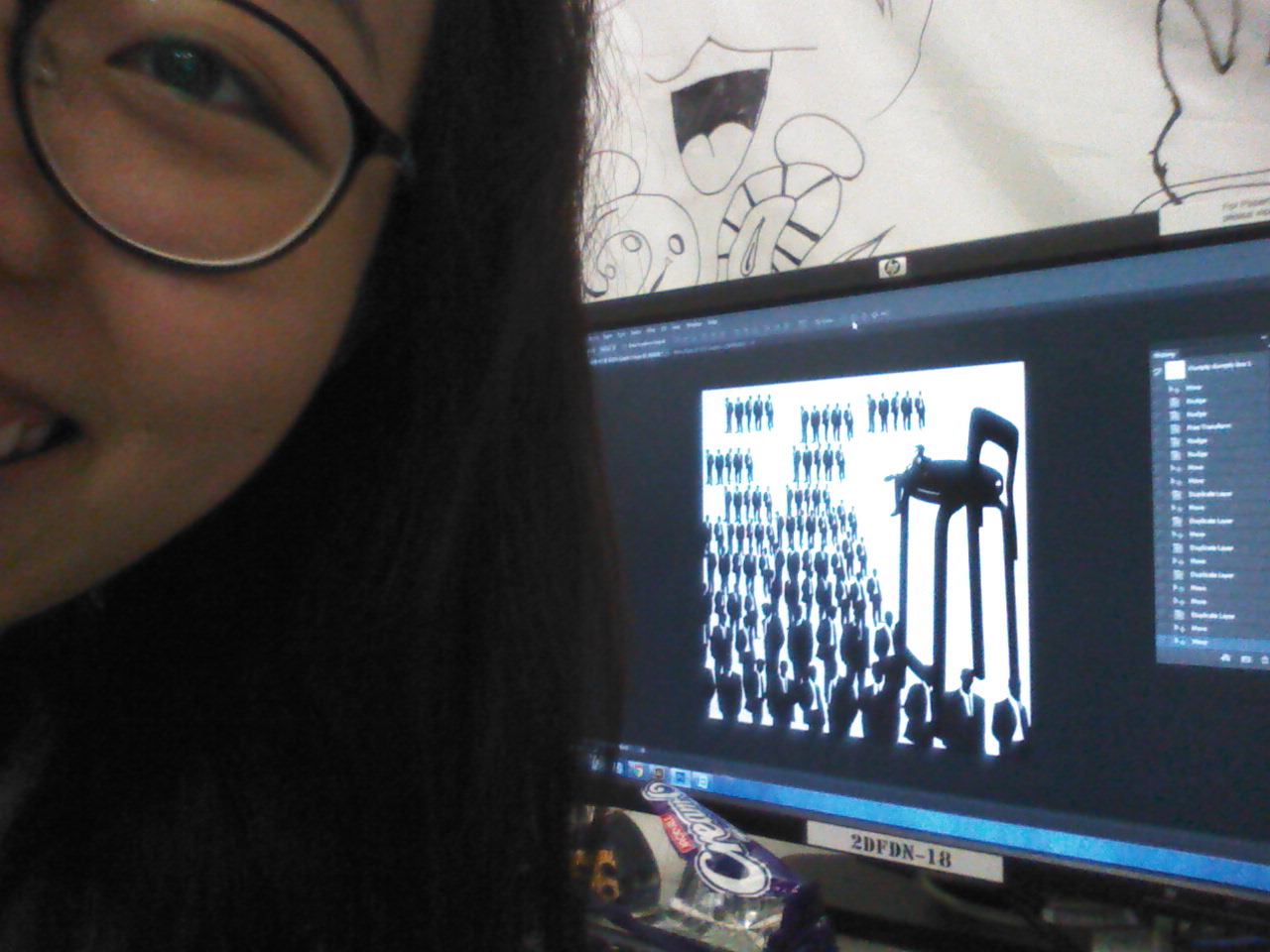 Medium: Turbulence reflected in the reaction between water and charcoal powder on paper.

Evaluation: Turbulence as a violent movement of fluid. Placement of strip in a vertical manner with two-third of positive space at the top to suggest waves splashing towards or away from me at a distance. Juxtaposition of minute spots (bottom) against huge patches (top).

Process: First, I vary the scales of the circles by having them in three different set of sizes: Big, Medium and Small. Then I layered the three tracing papers with the set of big circles at the bottom, the set of medium circles in the middle and the set of small circles on top.

Evaluation: Polka dots appear as very silly and fatuous to me. The random spacing and senseless repetition in irregular scales make polka dots nonsensical. The choice of tracing paper for its inherent quality of translucency to create a sense of depth through varying opacity of dots. Big dots seem far away and small dots seem near. My main reason for rejecting the ‘Runner-up strip’ for nonsensical is because it is not as interesting as polka dots in its overall presentation.

Process: Switching between different types of brushes for their different capacity in water absorption. Bristle brush appear to absorb lesser water as compared to watercolour brushes, thus they create small and big splatter respectively. Tilting the paper to allow excess ink in splatters to flow voluntarily in the direction I desire (because I am spontaneous).

Evaluation: The action of spattering ink on paper is spontaneous to me. After my spontaneous act, I thought I am in deep trouble because it’s so hard to find sense in spontaneous art. After consulting my instructor, I decided on the chosen strip for the contrast between drips in the vertical and horizontal axis which are thin and thick respectively. The difference in density of splatters with those of lower density at one-third (top) and higher density at two-third (bottom). Choice of placement with higher density at the bottom to suggest heaviness of splatter.

Process: Swirls created free handed from top cautiously, then carelessly mid-way through by drawing without looking at the paper.

Evaluation: Swirls composing two-third of the strip and empty portion composing one-third. Empty portion as a representation of halting in work, because of the error (flawed swirls) caused when I was distracted by my idols dancing on screen. Okay…tmi.

Process: Erasure on 2B pencil then darkening with 4B to create greater contrast in light and dark.

Evaluation: Inspired from the movement of smoke in the atmosphere, suggestive of relaxation. Implied lines observed in a slow tempo, like adagio. Erasure to bring out the white of the paper and blurred/ blended contours to suggest softness. Adagio feels soft to me.

Process: Drawing different geometric shapes in a whimsical manner such that they appear unexpected and unusual with no symbolic meaning.

Evaluation: Overlapping positive and negative shapes and varying sizes of shapes to suggest depth. Distributing weight represented in solid shapes (heavy) as compared to outline of shapes. (empty and light).

Process: Creating thin lines with a sharp point of a pencil, and thick lines with a blunt edge or through shading.

Evaluation: Experimenting with a range of pencils to create a light and heavy line weight. The reflective quality of graphite pencils suggest smooth, silky hair. Placement of strip to suggest long hair flowing downwards. Hair suggest something very sensual to me, which is perhaps a reason why hair plays a great role in physical attraction.

Process: Drawing straight straw-like sticks overlapping one another with a crooked one in the middle.

Evaluation: Overlapping suggest depth. I feel awkward when I stand out in a group. The crooked straw is a representative of a person who feels awkward. It does not mingle with other straws and appears noticeable in the spot light even though it is also a straw, mainly, because it is not straight. I am not going into homosexuality here.

Process: Repetitive drawing of squares in a chequer arrangement.

Evaluation: Systematic appears to be something very rigid to me. To be systematic is to follow an order, a grid, a format.

Process: Free hand drawing of squares in a chequer arrangement.

Evaluation: Choice of pencil instead of pen for its greater smudging effect. The smudges represents a sloven person in an act of drawing. My intentional placement of the subject for sloven next to the subject for systematic is to cast a comparison between the two roles. I wanted to show how sloven is not all about being messy, it can have a logic too. In my case, I was trying to replicate the systematic chequer arrangement in sloven, except it turns out to be very untidy in its overall presentation.

Process: Juxtaposing curvy lines with straight line made using a pen and a pencil respectively.

Evaluation: Observing uneven cracks and emphasising on the irregular path of cracks by having curvy lines to be thicker and darker as compared to the thin, faint, straight lines. Criss-crossing of paths in an unpredictable manner to show glass breaking naturally.

Process: Making short pencil strokes along the sides and at the corners of a strip of paper.

Evaluation: Embarrassment is something that I want to hide. Embarrassed represented in the lines hiding at the corners and along the sides of a paper. You can tell that something is there because the edges of the strip appear curved instead of angular, but only if you look closer. If you hadn’t looked closer, you would only see an empty white ellipse.

Process: Drawing circles and triangles, then shading in for circles only.

Evaluation: Incisiveness in the choice of shape. Should I use circles or triangles? Placement of circles at the bottom two-third of the strip because they appear heavy and sinking since they are solid shapes. Placement of triangles at the top one-third of the strip because they appear light and floating since they are hollow shapes.

Medium: Black marker pen, 2B and 8B pencils.

Process: Acting psychotic on the paper with the tools.

Evaluation: Psychotic reflects uncontrolled emotions to me, especially anger: being angry with my surroundings and being angry with myself. Psychotic can be self-harming. Thin lines contrast with thick lines created in zig-zagged motion using 2B and 8B pencils respectively. Zig-zagged motion to suggest slashing action. Forceful application of lines in a violent manner. Dark dots created by stabbing the paper with a black marker pen. My marker pen died in the act. T.T

My reflection: Thinking of how to translate 18 sets of emotions into lines through my hand was a tedious process indeed. At the beginning, I was lost with my dots. I don’t know which path I should take my dots on for a walk. During the walk, I got to know my dots better and I felt like I could empathise with them. We had fun along the way through adventurous explorations with conventional (pencil, pen, charcoal, Chinese ink) and unconventional mediums (pencil shavings). My hands became the bridge between the paper and me. I learnt to be more translucent with expressing myself to my audiences yet not losing my individuality at the same time. This four weeks long walk has been unforgettable. To all the people out there embarking on the same project: Wear your heart on your sleeves!