On Week 10, we have presented three variation in different material combinations.

We have decided to use wood and metal as the material for the construction of the installation as it seems like the most economic, sustainable and feasible choice of building material out of the other two (Concrete and Polycarbonate).

The following illustration depicts our chosen conceptual form and interaction for our installation that is inspired from fluidity and dynamism. The installation aims to provide students of NTU with both personal and public space within a singular sculpture.

At the beginning, we experimented making the curve with acrylic sheet using a hot air gun. To do so, we made a jig to secure the acrylic in shape.

The process was quite tedious. We had to be attentive to the temperature and distance of the hot air gun to make sure we keep a safe distance so that the temperature is not too high. Ultimately, the experiment did not turn out as expected so we have discarded it. We realised that we would need more practice to ensure that the acrylic do not overheat but is heated enough to retain a shape.

In preparation for the final prototype scaled model, we moved on to working with plywood for a more accurate representation of the installation that we propose to construct with wooden panels. Uploading the dimensions at 1:50 scale, we laser cut numerous repeated panels and two identical cross-sectional profiles.

For the virtual 3D model, we have constructed each wooden panels with the dimensions 2500mm long, 120mm in width and 25mm thick. There are a total of 142 panels in total, about 70 panels on the inner wall and 72 panels on the outer wall. A continuous metal rod that serves as the supporting internal structure will be sandwiched between the outer and inner wall of wooden panels.

Click on the image above to watch the installation in movement.

We realised that the weight of the plywood is pretty heavy when arranged along the cross-sectional profile curve that is made similarly out of plywood. To remedy the heaviness of the roof, we have placed a transparent acrylic sheet at the overhang to hold the roof up.

For the following week, we aim to have a final rendition of the installation for a more finalised form with the details included.

Also, we will continue to work on the making of the final prototype model. We thought of using wire to make the cross-sectional profile curves instead of plywood for a stronger internal supporting structure to ensure that the weight of the roof will not alter the shape of the intended curve.

For this week, we decided to re-design and re-proportion the shape of the installation. To inject more dynamism into the shape, we have changed the direction and distance of the curve by increasing the inclination and having an upward progression for the spaces between two surfaces. We can observe that the space between the ground and the first curve in the first direction is smaller than the space between the surface of the first curve and the second curve in the opposing direction.

By increasing the space between the second and first curve, the upper part appears elevated and floats above the lower part, reducing the sense of unbalance. By tilting the previous shape backwards and resting the shape at an angle to the ground, the curve appears more relaxed and less static. 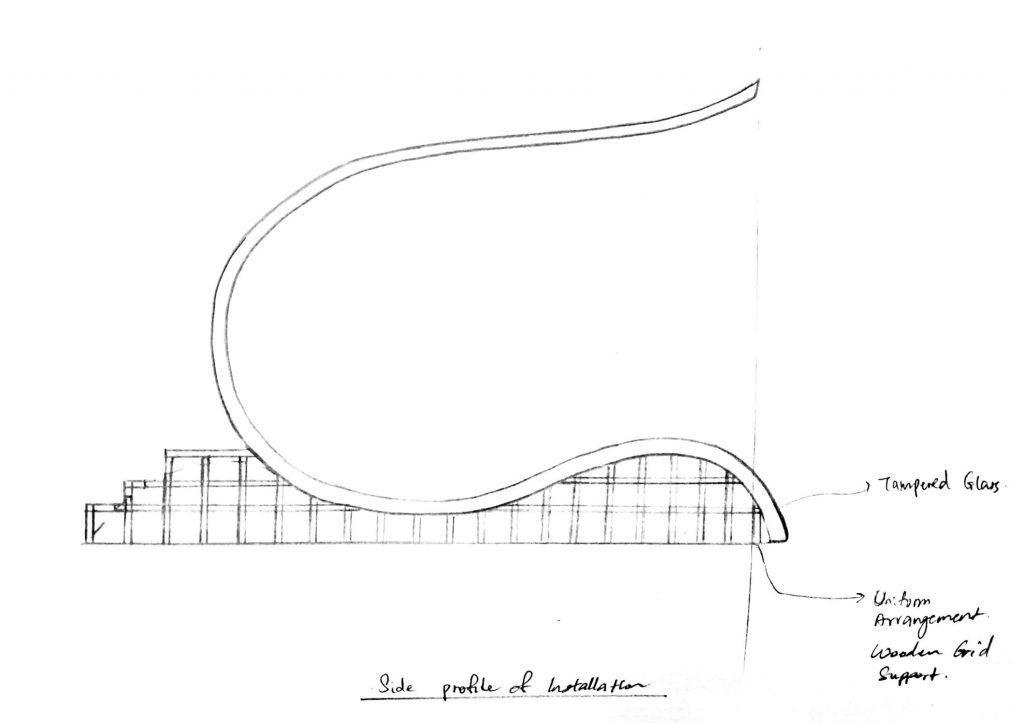 We have incorporated grid supporting structures beneath the curvature for a couple of reasons.

Firstly, the grid serves as a pedestal to elevate the curvature.

Secondly, the grid serves as a elevation above the ground by approximately 350 mm so that users can sit comfortably on the curvature at that height.

Thirdly, the grid serves as a contrasting element. Juxtaposed with a rigid and uniform grid, the curvature appears to be fluid and dynamic. 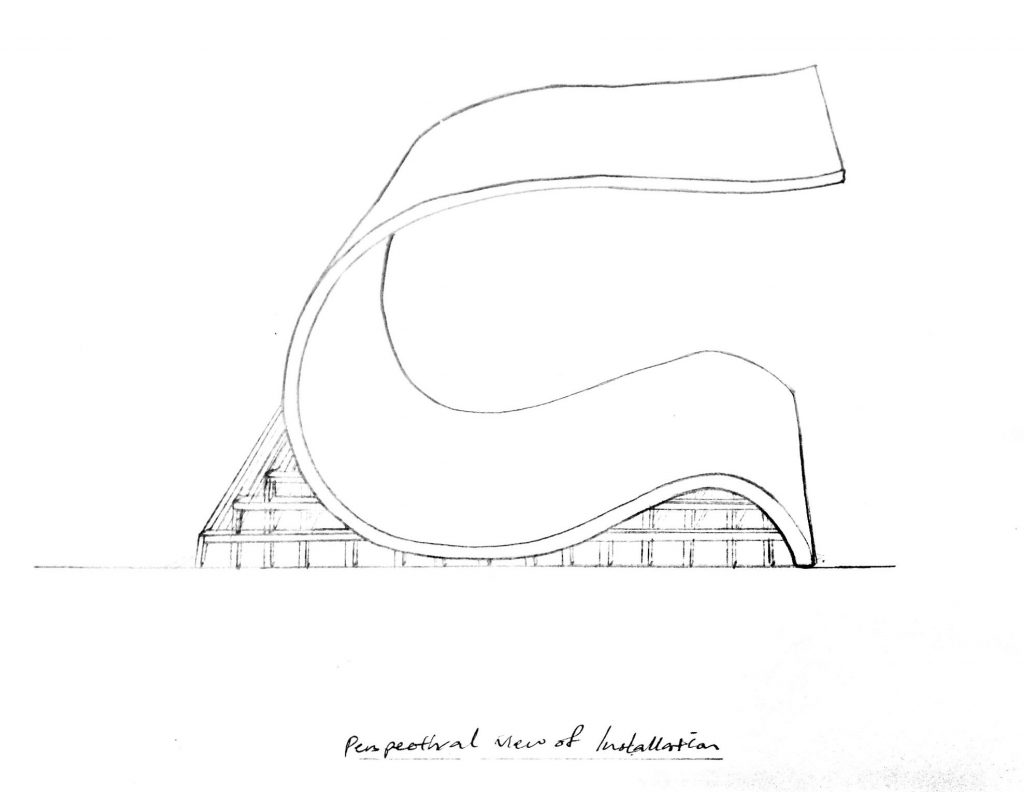 In order to understand what translucent material would be best suited for construction that is safe and strong, we did a research into the different types of glass and properties of thermoplastic that projects an appearance like glass.

Polycarbonate: This plastic is 300 times stronger than glass, is resistant to most chemicals, is twice as lighter than glass, has high abrasion and impact resistance. It can transmit as much light as glass without many distortions. Applications include window, green house glazing etc.

Adapted from Glass as a Building Material. (n.d.). Retrieved March 25, 2018, from http://www.understandconstruction.com/glass.html

We would like to propose using semi-transparent polycarbonate for the construction material of the installation as its transparent property is closest to fluid.

Polycarbonate has been said to have a lifespan of at least 10 years and can be recycled.

Other than the choice of polycarbonate, we also propose using GFRC concrete or wood for the construction of the installation. GFRC is a sustainable material and has a longer lifespan than polycarbonate. Wood would be a more affordable choice of material. It is also a material that is versatile and exude a warm shade (as compared to metal) which makes it a more inviting material.

The new shapes does not require any rails and ladder since it no longer have a second level. Although we have altered the presentation of the shape, we still retain the concept of a personal and public space within a single sculpture.

For the Concrete model, the metal rods are organised in random order like the random arrangement of square holes represented in last week’s model to complement the dynamic flow of the curve.

Whereas, for the polycarbonate model, the wooden rods appears more organised than the metal rods in the concrete model. This is to create a contrast between the dynamic curve and static grids.

Other than a polycarbonate sheet, we continued to explore with grid patterns on the curved sheet. We rearranged the square holes in hierarchical progression to convey dynamism. In terms of construction, we would like to portray the square holes with wooden panels that are connected with metal bolts and supporting frame.

If the installation with patterned surface appeals more to people, we plan to research deeper into the arrangements of square holes in the curvature such as by following a certain mathematical progression or a pattern derived from an abstract representation of the location (eg. ariel view of grass patch at location/ arrangement of windows of buildings at location).