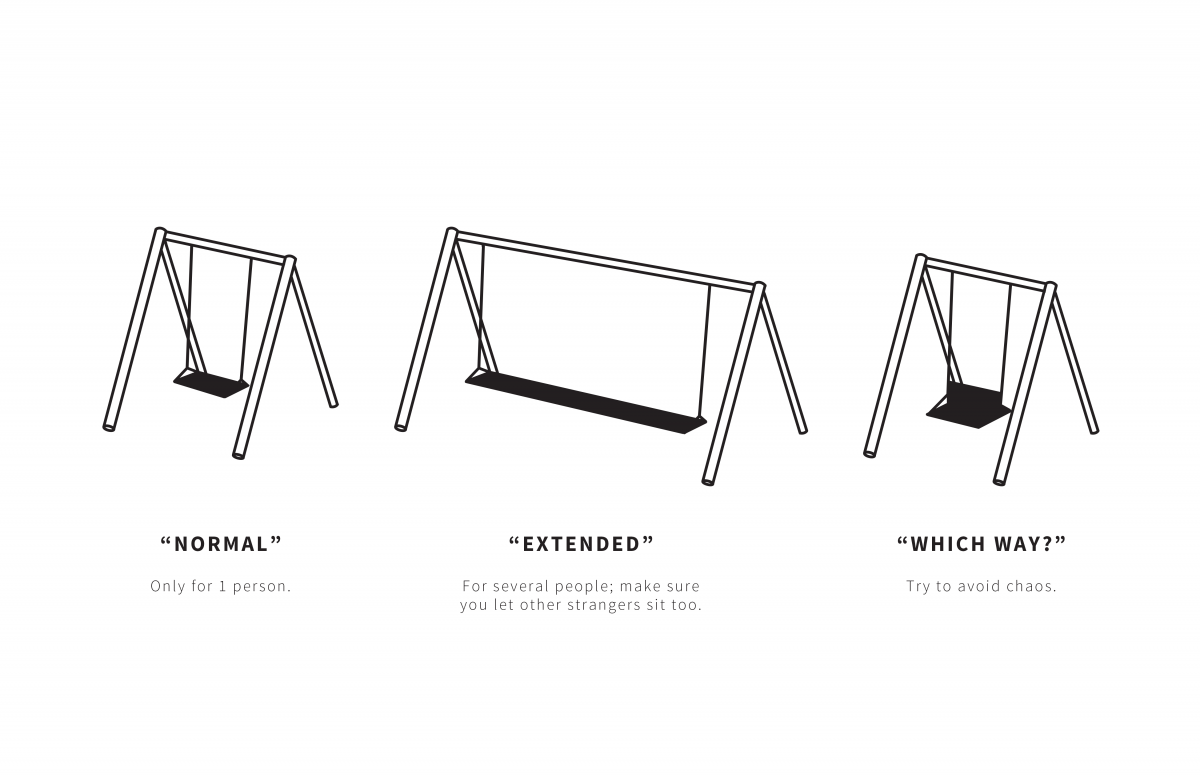 After our discussion, we picked out a few opposite adjectives from the reading to produce a sketch model for the proposal of an installation in NTU.

The opposite adjectives are: organisation vs chaos, mundane vs abnormal, cause vs effect, hidden vs noticeable.

We did some research work on existing designs and art works to inspire us in the making of our sketch model. We came to the decision of making different iterations of swings to convey the opposite adjectives and to introduce to our audience new ways of seeing the existing objects in an uncanny way. The concept of playfulness and fun came from the thought of making an installation that would bring our audience back to childhood carefree times admist the stressful environment of the University. We re-use “the swing” to evoke a sense of childhood familiarity that all of us have experienced before and re-designed “the swing” by adding more elements to make the familiar unfamiliar and provoke people to question the normalities of “the swing”. “The swing” that is normal to people becomes abnormal as people do not know how to use the iterated versions of “the swing” which they have originally gotten use to.

We made our sketch models out of cardboard, cotton thread and chopsticks. Our initial trial with nylon fishing thread was too stiff and produce a swing that looks stiff.

Sitting on the swing is an interaction that comes with a cause and effect – a push and pull that results in our forward and backward movement that repeats in a continuous linear loop.

Another suggestion made in class was to subtract the swing, such that the swing is removed and what is left is just its holding support. This questions: Will people still see the swing as a swing? Will people be able to formulate that what has been left behind use to be a part of the swing?

For the later part of the class, we made different sculptures with 10cm x 10cm cardboards, describing different types of nature, namely: Rain (1), Angry Wind (2) and Pinocchio flys out of the whale’s spout (3).

To begin, we will share our thoughts and brainstormed discussions on an extract by George Perec, titled “Day-to-Day Data” which we have read out in our first lesson on week one here.

We will choose a few contrasting adjectives to begin our conceptualising of the installation work, which we will talk more about in week 2.