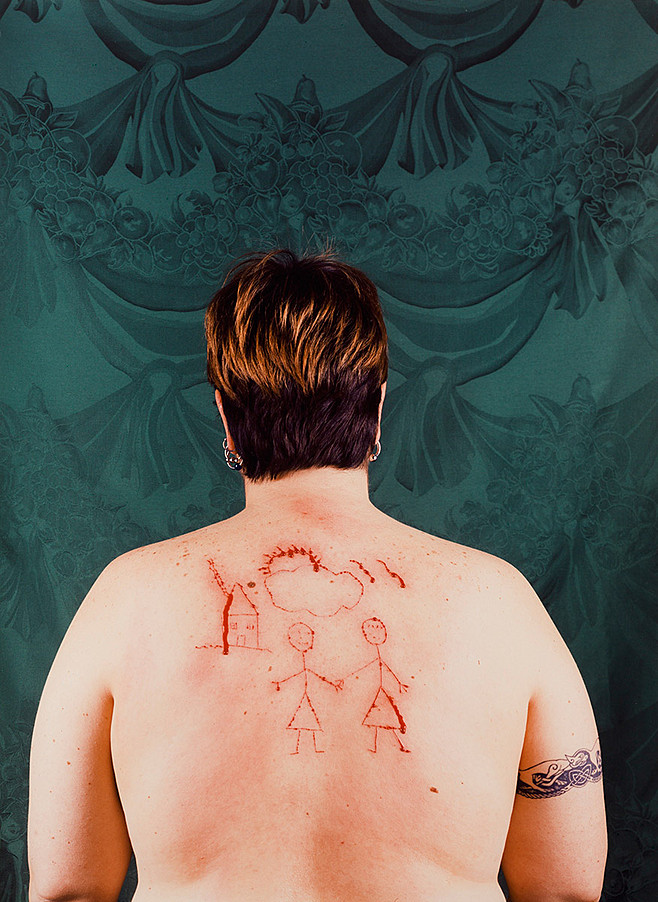 Who is Catherine Opie?

Born in Sandusky, Ohio, in 1961, Catherine Opie is an American fine-art photographer who specialises in portraitures, studios and landscape photography. She rose to prominence as a photographer at the height of the culture wars between traditional and conservative values in the 1990s.

Her works explore the relationships between mainstream and infrequent society by mixing traditional portrait photography with less traditional subjects. In doing so, she provides a social and political commentary of different communities such as the LGBT (lesbian, gay, bisexual, and transgender) community. As Opie identifies as part of the LGBT community, she sought to provide visibility and representation to her friends and the community at large, bringing queers to a forefront normally silenced by societal norms. At the core of her investigations are questions about relationships between individual and the community.

How did she feel during the time she did ‘Self-portrait/cutting’?

In her portrait, Opie offers something deeply personal, even confessional, revealing extremely strong yearnings that are magnified by the great physical fragility of the sadomasochistic acts the photographs portray. At that point in time, Opie had recently broken up with her partner. Then, she was longing very deeply to start a family, which at that era was still condemned by many. The rawness of the cut amplifies her pure and burning desire. The bleeding, juvenile, stick-figure drawing of lesbian domestic bliss cut into the flesh of her back radiates all the painful contradictions that were innate in such situations.

What is her intention?

Opie aims to address contemporary concerns of queer identity, where ‘queer’ has been used as a derogatory term for individuals with non-normative sexual or gender identities in her work.

Self-portrait/ Cutting shows a female nude seen from behind. In Opie’s work, she moves away from traditional representation of ‘Self’ by omitting her face from her viewers. Firstly, instead of showing distinct unique features of her face, she chose to present herself in a non-confrontational way with her back facing her viewers to allow viewers to enter her art invitingly, and look at something they might not otherwise look at. Secondly, her intention may be to make us look into homosexual identity in general, not specific to herself, by disallowing us to associate her face with her identity.

She has treated her skin as a canvas to express herself in Self-portrait/ Cutting. With her blood still fresh in red bleeding through the cuts on her back during the time she photographed herself tells of her deliberate intention to portray her pain at that moment in time. Her weeping blood is also representational of the inner conflicts she have with her inner self in relation to her physical body.

Other works by Opie:

~Brought to you by Rene, Charliemae & Liying