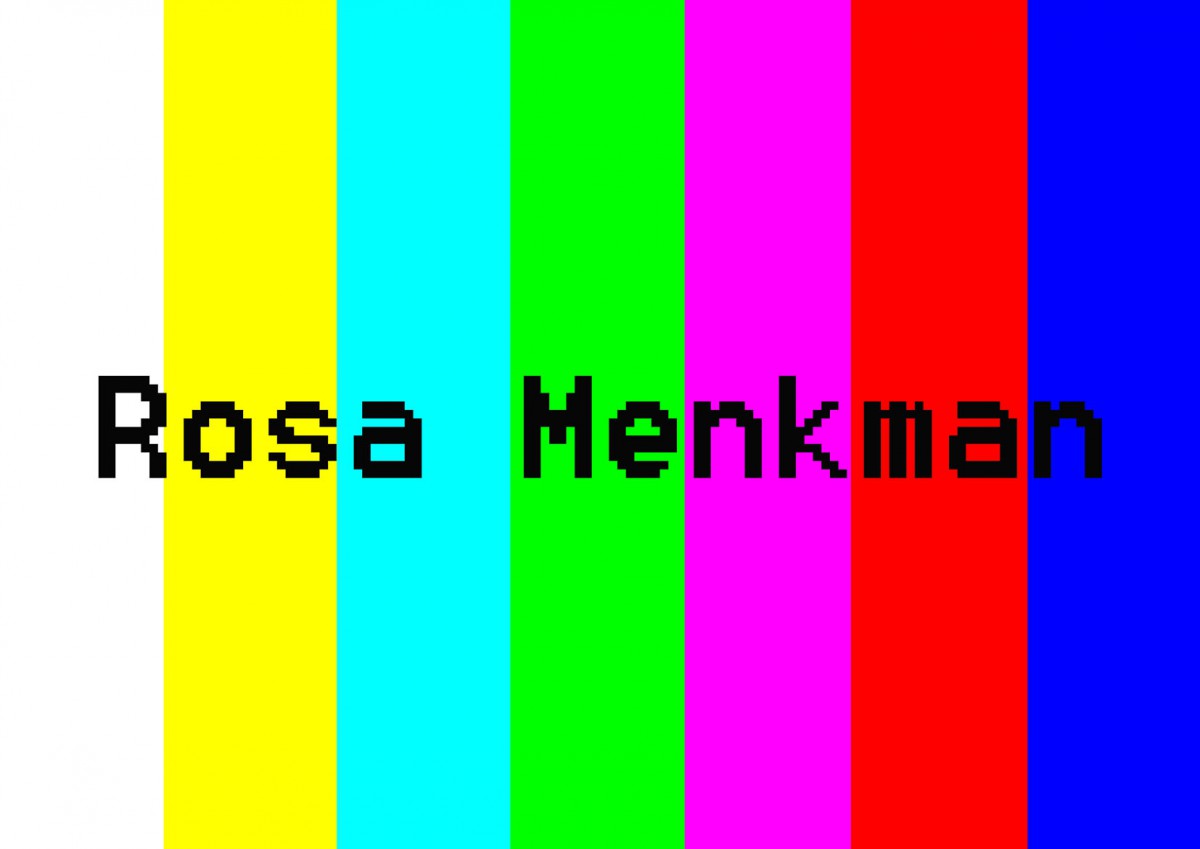 To begin with, watch a short video of PAL coloured bars (stop at 0:40 if you don’t want to hurt your ears).

Since I was so intrigue with PAL coloured bars and glitch as inspired by Rosa Menkman, I found a way to create a glitch video with the help of an image glitch tool and an extract of the sound track (14 seconds long) from the YouTube video above (Just for fun). I let the tool break the code for me, so I had an easy time. 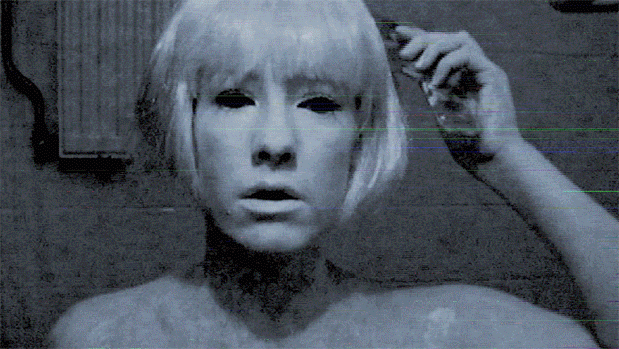 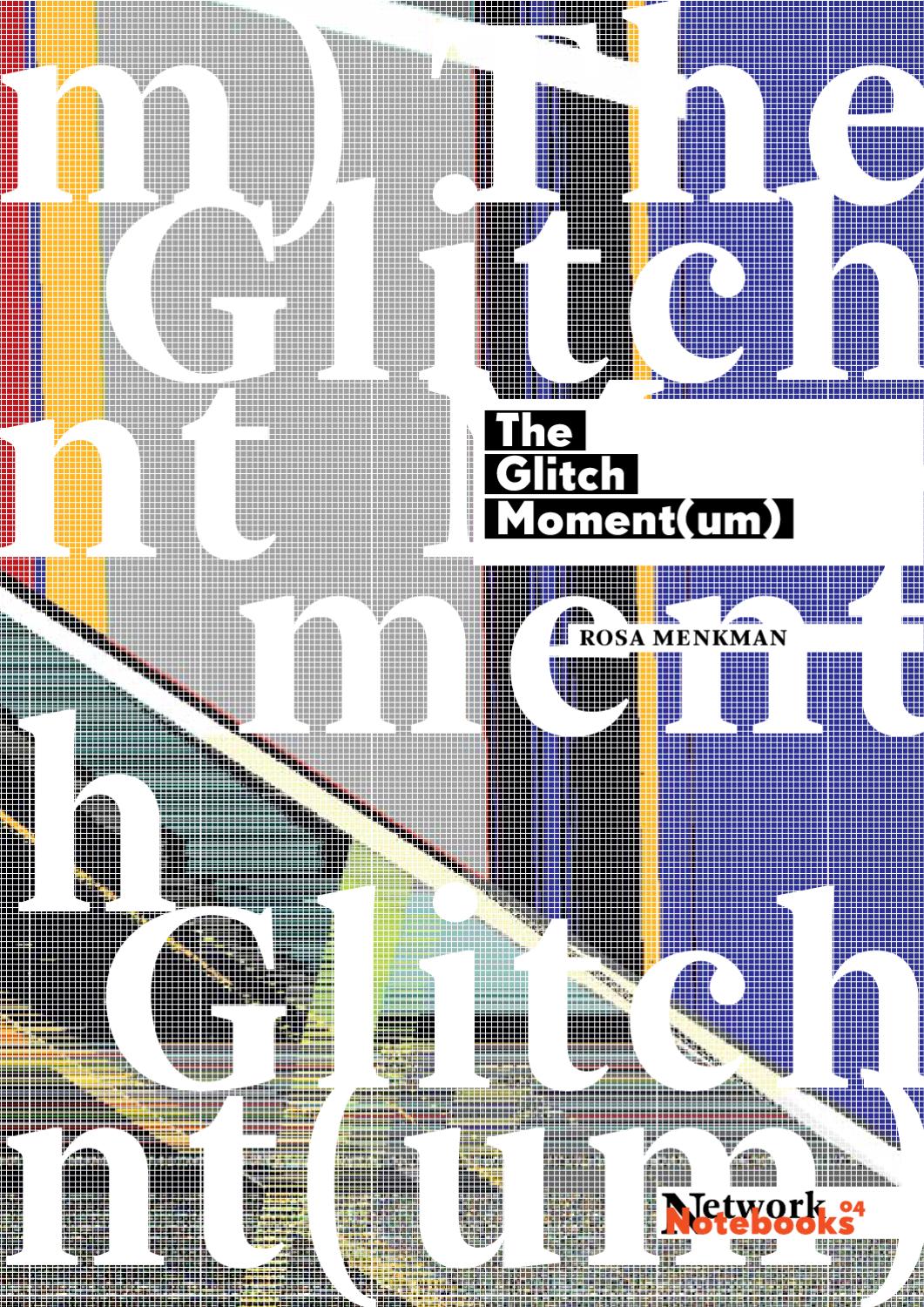 Menkman has written a book, ‘the Glitch Moment/um’, on glitch artifacts, co-facilitated the GLI.TC/H festivals and curated numerous exhibitions on glitch art. She is currently pursuing a PhD at Goldsmiths, London.

I describe the ‘glitch’ as a (actual and/or simulated) break from an expected or conventional flow of information or meaning within (digital) communication systems that results in a perceived accident or error.

Unlike many people who show dislike towards these accidents, Menkman shares an optimistic view on them. She sees these artifacts as a tool to help us understand the obfuscated alchemy of standardizations via resolutions. Rosa Menkman’s ‘resolutions’ are ‘studies of solution’. She investigates solutions between different kinds of materials, and what one wants to do with them.

From Rosa Menkman on Resolutions ,

when there is no real question, we need creative problems.

When she was in New York City, she was walking around even though she was not feeling well. A friend explained to her that he just got the flu vaccination, because there was a big outbreak of flu according to Google Flu Trends. Instead of getting a flu vaccination (like what her friend did) because big data are showing that it would be wise to do so, Rosa Menkman was more interested to know why she was not feeling well. She mentioned that the amount of available data/ information we can find with keywords is so great now, we are no longer bothered to ask questions anymore. Through her glitch explorations, Rosa Menkman advocates that we should learn how to make questions again.

The Collapse of PAL was a video footage first developed as a commission for SOUND & TELEVISION (Copenhagen, Dnk). It is based on the analogue PAL video signal, compressions, glitches and feedback artifacts that are complimented by (obsolete) soundscapes that originate from both analogue (PAL) and digital media (DVB). Rather than a stream-lined sound-image of digital convergence, SOUND & TELEVISION strives to act as a springboard for an aesthetic “media-clash” reflecting on the political-aesthetic of old and new media forms.

By introducing a critical and melodramatic narrative to a work of glitch art, I tried to underline that there is more to glitch art, and more at stake, than just design and aesthetics.

Apart from design and aesthetics, there is signal, noise, liveliness and flow along with standardized production formats in the aspects of the television medium which are reshaped in digital, networked media. The Collapse of PAL is a transmission art project that explores the performativity of television along with challenges brought about by a converging media cape.  In this performance, the transmission itself became the artwork. The performance reflects on different significant aspects of the changing conditions of broadcasting. In the new DVB-T (digital terrestrial television) environment, the very transmission format of TV has changed, from symmetric analog to asymmetric data flows, encoded in the MPEG format and decoded through software implemented in everything from flat-screen TV’s, set-top-boxes and PC’s.

In “The Collapse of PAL” (Eulogy, Obsequies and Requiem for the planes of blue phosphor), the Angel of History (as described by Walter Benjamin) reflects on the PAL signal and its termination. This death sentence, although executed in silence, was a brutally violent act that left PAL disregarded and obsolete. While it might be argued that the PAL signal is dead, it still exists as a trace left upon the new, ‘better’ digital technologies. PAL can, even though the technology is terminated, be found here as a historical form that newer technologies build upon, in- herit or have appropriated from. Besides this, the Angel also realizes that the new DVB signal that has been chosen over PAL is different, but at the same time also inherently flawed as PAL.

So what I understand from this passage is that there is a subject called “the Angel of History” who narrates the story of the termination of PAL signal. In the video, PAL was described to be inherently flawed as “a pile of debris growing skyward” and “connections that were just not good enough”. The new, ‘better’ digital technologies – DVB signal that takes the role of PAL today, was built upon PAL. As the new digital technology, DVB signal, was a development from PAL, traces of PAL remain evident in its inherent flaws. The Angel then realises that the idea of DVB signal having traces of inherent flaws similar to that of PAL, makes DVB signal inherently flawed too. This was quite ironic to me as one would expect that the newer technology should be better and not have persisting flaws from older technology.

Every form of glitch, whether breaking a flow or designed to look like it breaks a flow, will eventually become a new fashion.

As much as I have researched on The Collapse of PAL, I cannot fully comprehend the process of its making, the tools and media as I have never worked and do not know how to start working on them. These are some of the other readings I did: PAL video timing specification for PAL signals and more readings on Rosa Menkman’s blog.

I would like to end off with two prominent music videos: Kayne West’s welcome to heartbreak (2009, directed by Nabil Elderkin), which was mentioned in a TED video by Rosa Menkman: Glitch – Benchmarking the deranged: Rosa Menkman at TEDxUtrecht, and Chairlift’s evident utensil (2009, Ray Tintori). I am interested on how the videos were made…going to find out more about it’s making and something called datamoshing.