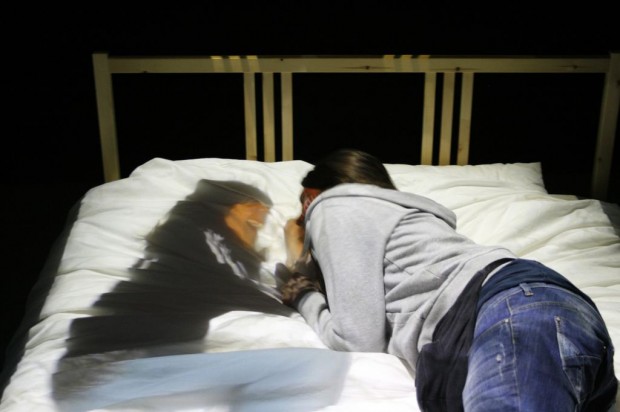 “Telematic Dreaming”, by Paul Sermon, is an installation made within the Integrated Services Digital Network (ISDN). This installation enables two participants to engage in a strong sense of intimacy and shared presence in the third space, where they lie on beds in remote locations.

In “Telematic Dreaming”, two participants are not allowed physical touch and can only feel each other using their sense of sight. However, I can’t help but ask the question: Can we touch with our eyes?

The telepresent projection surface acts as a mirror that reflects one person (local) within the reflection of another person (foreign). At the same time, these reflections forces participants to form relationships with each other through a transparent touch – a touch that cannot be felt by their corporeal body.

I think; therefore I am.

Cartesian dualism is a belief that there are two kinds of reality: material and immaterial. This principle is supported by René Descartes, a French philosopher, who believes that the body and the mind are separate from each other. There is an increasing acceptance of the principle of Cartesian dualism where people believe that the virtual body is disembodied and unrelated to the physical world. In ‘Telematic Dreaming’, it is easy to assume that a projected image is merely a reflection of reality and not reality itself. While it is a fact that the projected image appears to be a reflection of reality, it is superficial to say that the projected image is separated from reality completely.

I seldom feel without thinking, or think without feeling.

We cannot touch with our eyes but we can materialise what we see as the feeling of being touched or touching another. This belief is further emphasized by Samuel Taylor Coleridge, an English poet, who was quoted saying, “I seldom feel without thinking, or think without feeling.” The visual images registered in our minds can be led by our thoughts to be associated with certain emotions which may build up to become feelings.

I see a man presents a rose to me,

I see the man who I love flirting with another woman,

I feel my body heat up.

But Sermon deliberately avoids providing an audio link so as to concentrate attention on the meeting of two bodies separated in real space but virtually conjoined: “human interaction was reduced to its simplest essence: touch, trust, vulnerability.”

To further emphasize on the visual aspect of this project, Sermon prevents participants from communicating with each other by removing the audio function from the live video. This way he portrayed human interaction in its essential form of touch, trust and vulnerability, relying solely on sight for the success of his work.

While participants place themselves in vulnerable positions as they expose their emotions to each other through actions and sight, they can be selective with what they want to believe in. In the case where a man in the second space punches a projected image of a woman in the first space, the woman can choose to close her eyes or deny the act of violence and brutality from the third space such that she no longer believes that the image of the woman in the third space is herself.

the distinction between materiality and immateriality in the technology is movement: as moving beings people take on an alternative materiality, while objects become immaterial in their inertia

Rather than choosing to believe that the virtual body is separated from the corporeal body and is incapable of materiality, Suzan Kozel, one of Britain’s leading dance and technology artists, chooses to believe that an alternative materiality exist in the virtual body as the emotions felt through the mind can stimulate the body to react accordingly – just as when she held out her hand in the first space, to ‘receive’ the rose that was presented to her from a man in the second space. She believes that the only difference between virtual (mind) and reality (body) is movement – while she exerts materiality in the first space by moving her hand, she appears to be exerting an alternative materiality in the third space (as we see only an image of her and not her physical body) and the rose (object) appear immaterial in the third space (as the rose is intangible to her in all of the spaces since the rose does not exist physically in the first and third space and she does not exist physically in the second space to be able to really touch the rose – they are on parallel planes).

To conclude, Sermon’s “Telematic Dreaming” explores into the materiality and immateriality realm of touch where participants interact on a psychological/ spiritual level by using their minds to develop emotions and feelings of touch. If I were to appreciate “Telematic Dreaming” like how I would appreciate a painting, I feel that ‘movement’ in performance is the subject and the use of ‘third space’ and ‘sight’ is the medium, the vehicle that brings us the performance.

And yes, I am terrible at summarising because this post is definitely more than a thousand words.