Here are the 6 final images for my project, Point Of View, with the subject as a potato. 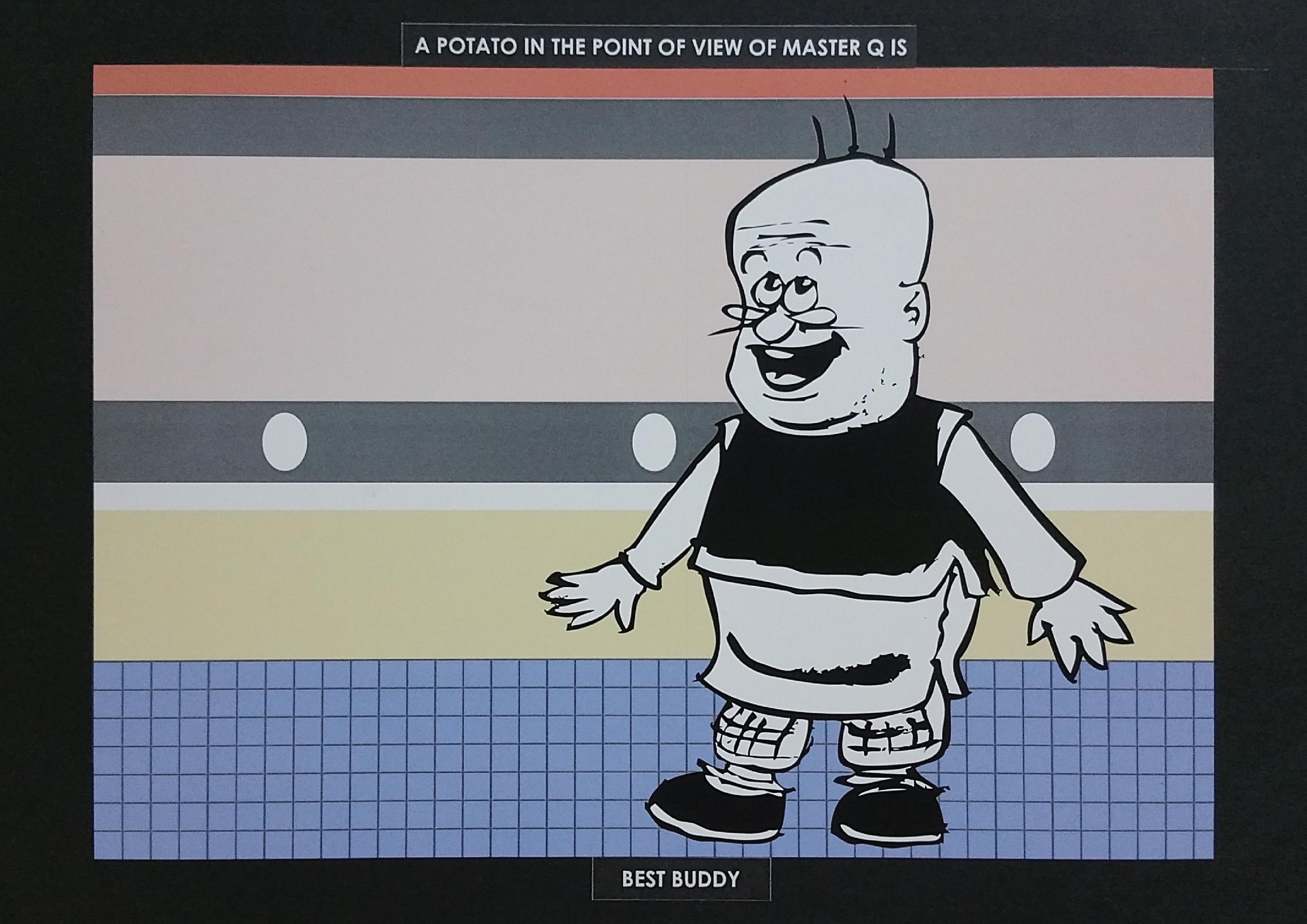 A potato in the point of view of Master Q. is best buddy.

How this idea came about as my first idea was that this Hong Kong comic back in the 90s, were all the hype. Relating this to my project, using a potato, it is a very straightforward understanding. Instead of using Master Q himself in the composition, I used the colours of his clothes, which I thought would be the most iconic feature of this character. Placing Mr. Potato in black and white would allow him to stand out from the colourful background. Another detail to be mentioned would be the placement of Mr. Potato at the thirds of the composition. This would make the image more interesting to look at, as well as showing the full details of the background. 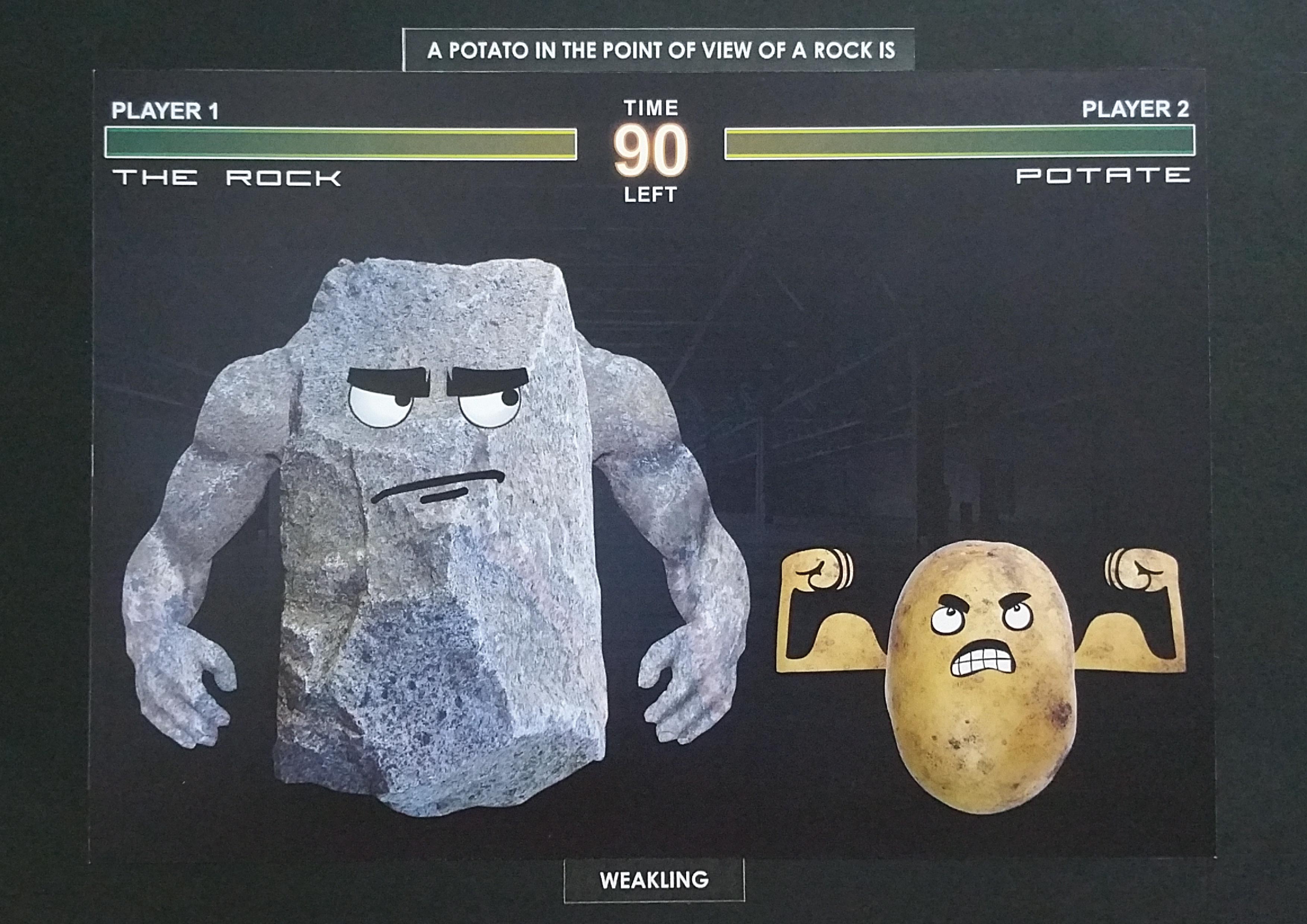 A potato in the point of view of rock is weakling.

Next up is a round of game fight between the muscular rock and the ignorant potato. Potato is jealous of the rock, who is so strong and tough, hence trained day and night to come to this day, where he can take him one on one. The image is formed with an arcade game fighting scene, where there are elements where one can see in a typical classic arcade fighting game. The rock, naturally strong and tough, need not do anythings to show his prowess, while the weak potato is trying very hard to prove that his training is going to pay off, and that he is stronger than the rock. This brings me to the composition, where the rock is placed in the two-thirds while the potato is placed in the one-thirds of the image to show the hierarchy of their size. 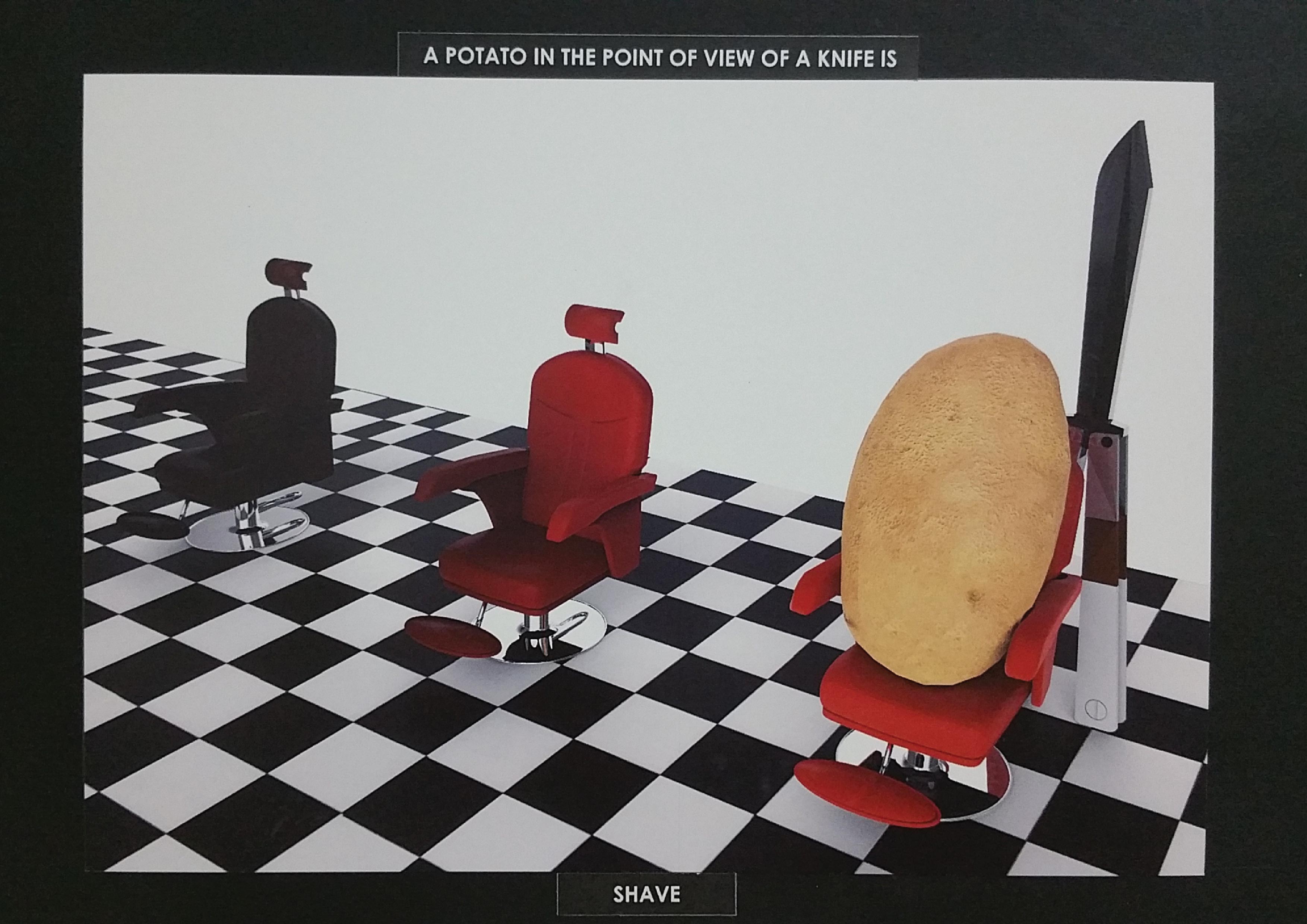 A potato in the point of view of a knife is shave.

We humans go to the barbers to cut our hair. So where do potatoes go to? Barbers too. This image is 3D rendered, and the potato is shown sitting on a chair, waiting for its hairdresser, the butterfly knife to attend to him.

The setup is based on a retro barber shop, with black and white tilings and red chairs. The potato again is placed at one-third of the image to make the image more interesting to look at, as well as to suggest a sense of depth in the barber shop. 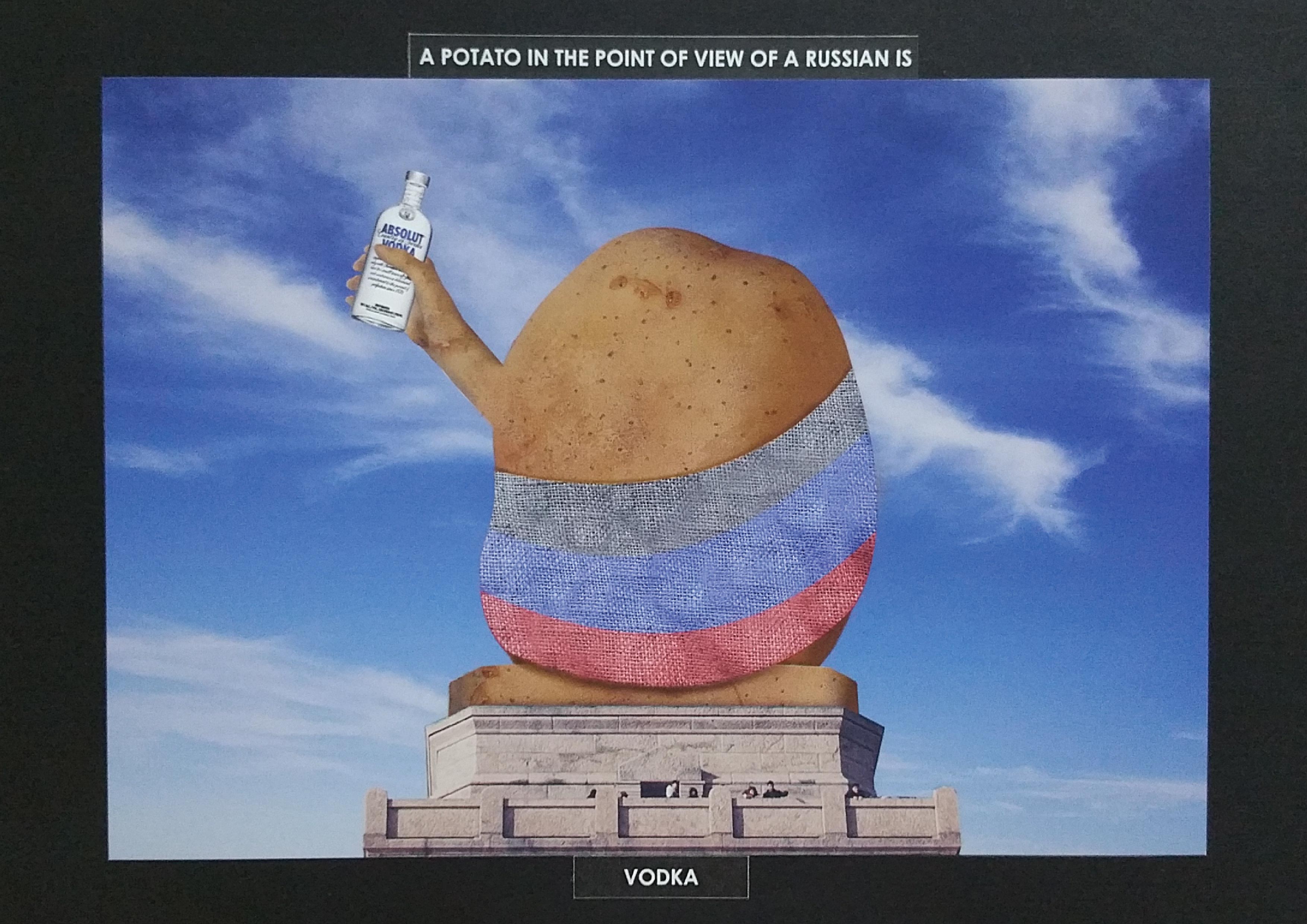 A potato in the point of view of Russia is vodka.

VODKA! Many of us do not know that one of vodka’s ingredient is potato. Upon knowing about this fun fact, I decided to go ahead with the idea of relating vodka and potato. After more in-depth research, I found out that Russians drink alot to keep their body warm, hence the decision to include Russia into the image.

The image above is inspired by the statue of liberty in New York, just in the context of a potato. The potato is holding a bottle of vodka, and he is clad in the potato sack which symbolises the Russia flag.

In composition context, it is a central triangular composition so as to convey the impression of the stability of the image, similar to how stable the Statue of Liberty is. 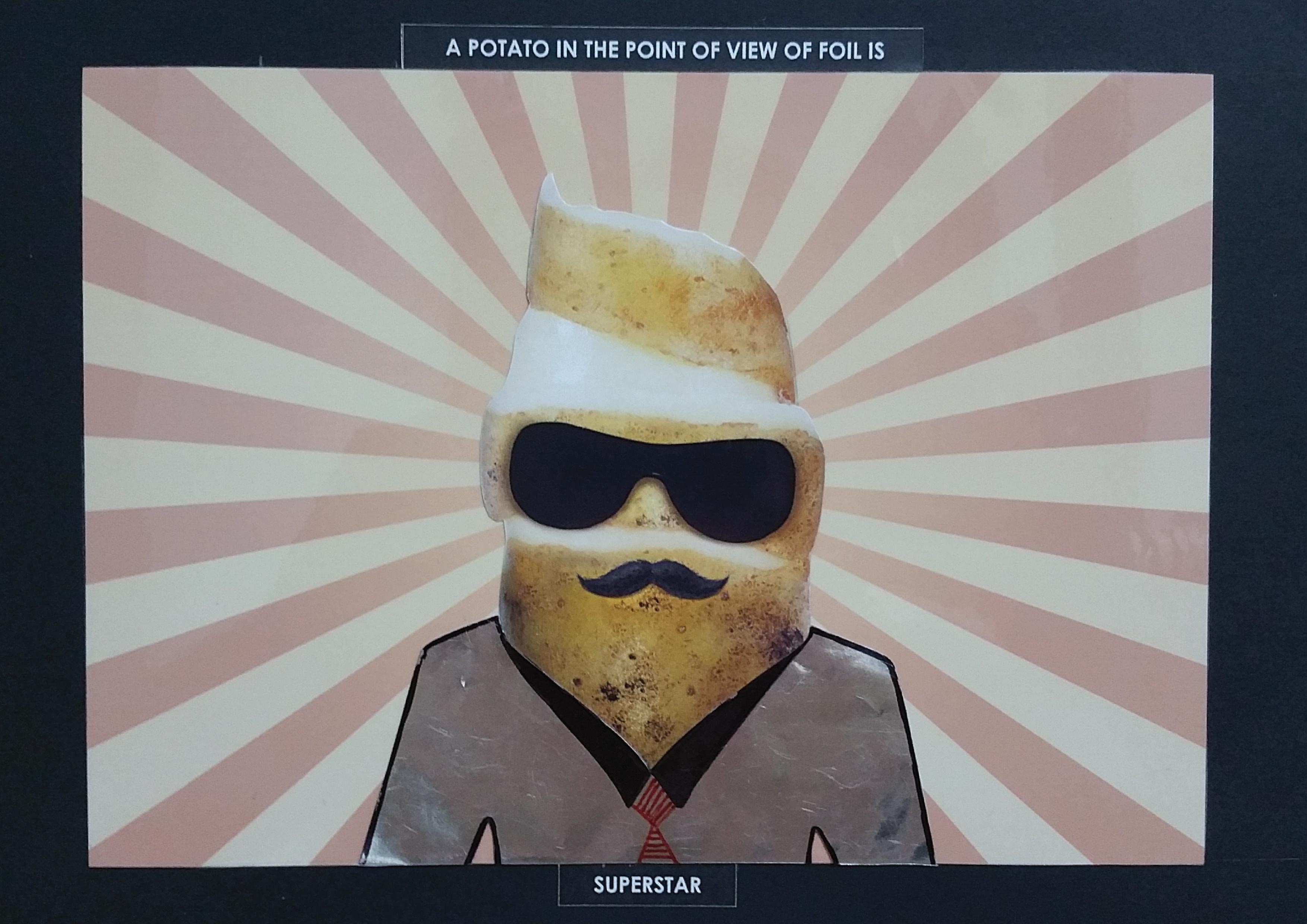 A potato in the point of view of foil is a superstar.

Often we consume potato chips and dispose of the packaging. In this image, it shows that actually, when the potato is inside the packaging, they are labelled as a superstar awaiting their time of glory (when we open up the packaging).

The shirt, is made with the inner side of the packaging of potato chips, to bring the image into the context of them living in the their glamourous world. The skin acts as their hair, to make them look more suave and superstar-like.

It is a central composition with radiating lights which brings the viewer’s eyes to the potato, making him the focus of the image. 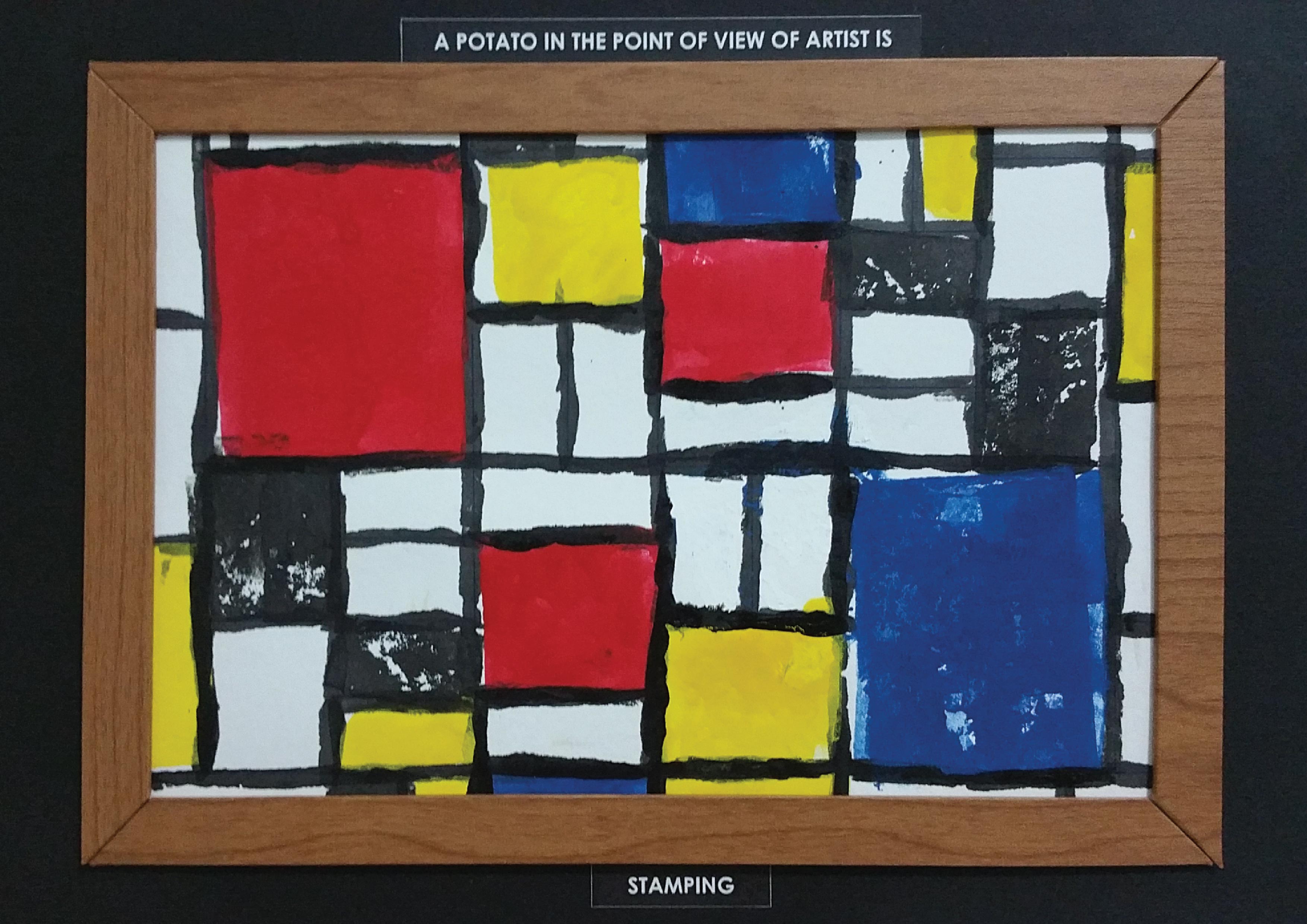 A potato in the point of view of an artist is stamping.

Lastly, we remember that we used to cut shapes out from raw potatoes, paint them, and then stamp them onto a blank piece of paper. This idea inspired me to make use of potatoes, to compose this image instead of including potato in it.

Inspired from Piet Mondrian’s “Composition” artwork, I took reference from his masterpiece, and recreated his work, out of stamping. The reason for choosing his work is because it comprises of the 3 primary colours, red green and blue.

Why red, green and blue? It brings us back to the basis of art, where the first few colours we interact with are these three basic colours. With the wooden frames, the whole image would simulate an artwork being framed and hung up in a museum.