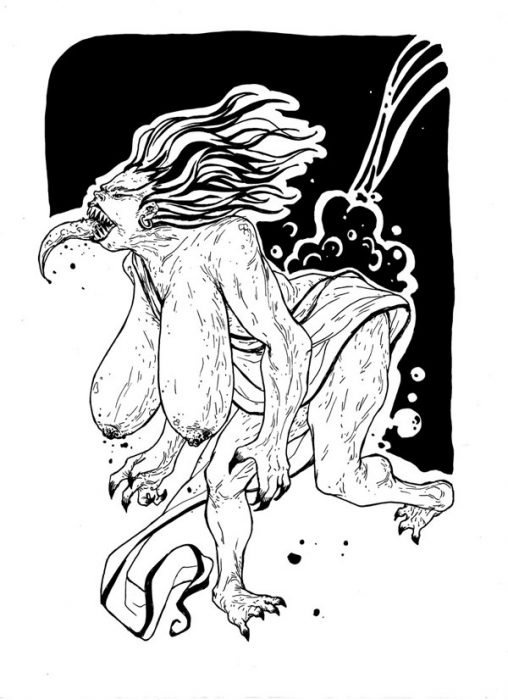 After much research, reading and talking to some of the elderly in my family, I have gathered some insights on the legend of the Hantu Tetek. I have decided to take the plot on a linear storyline as I feel that it serves scary narratives best. And I have also taken the liberty to modernize and glamorize this demon to “Teteque” instead as it gives a sense of ingenuity and character to it. 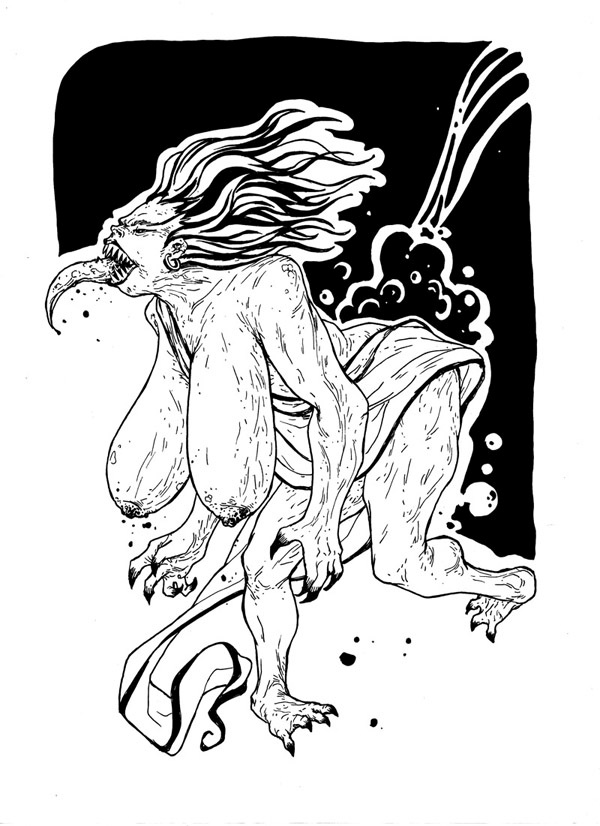 In Malay folklore, the Hantu Tetek is believed to be a ghost-witch, which existed back in the early days, with enormous mammaries that preys on little children and young men at the brink of dusk. Once her prey is entrapped in the constricts of her breasts, she suffocates and devours them.

The legend was told to scare little children to keep them indoors when night falls so that they would not be up to any mischief. Young men were also discouraged to be out at night as they too could become victims of the Hantu Tetek.

Although the idea of the Hantu Tetek may be too ridiculous and daunting to many, those who claimed to have sighted her described her as a monstrous demon with large breasts draped from her back. I would like to interpret her as a skinny elderly witch with silver hair, pasty pale skin, bloody-red eyes, razor-sharp teeth, long claws and long veiny breasts latched to her back that are too heavy, she has a hunch and sometimes goes on all four limbs to move around.

Wayan is a 15-year-old boy living in the outskirts of a quaint little village called Wesya located in the center of the dense jungles of the Malayan territory. He works for a local grocer, delivering goods to various households in the village on his bicycle after school. On most days, he would be home before dusk, just as how his single mother preferred it to be. She would fret every time he gets home late, even if it was for a few minutes, as she feared that he would go missing. Just like his father.

Wayan’s father has not returned home since he went out one night when Wayan was still an infant. The villagers believed that he and several others were taken away by a demon, called Teteque, who lurks in the forest at night preying on little children and young men. Due to the many disappearances in the past, parents would discourage their children from being out at night.

On a cold evening, Wayan raced up the rocky paths of a hill to make his last delivery for the day. He knew that if he paddled any slower, he would not make it home before sunset. As he attempted to make a sharp turn along the route, he swerved and fell into a ditch. He rolled down the roaring undergrowth that carpeted the forest floors and ended up on a shrub that cushioned his fall. He got up and pulled through the mishap with only a few scrapes and scratches on his arms. His bike, along with the groceries he intended to deliver, was nowhere in sight.

Wayan tried to retrace back the path where he fell from but instead found himself lost in the thick foliage. He reached into his pocket for his smart phone to see if it could be of any help for him to get home. However, there was absolutely no signal making it impossible for him to make any calls or navigate through the forest with GPS. The sky grew darker and Wayan knows that the best option for him now was to head forward and hopefully get back on a trail that would lead him home.

Within several minutes, Wayan came across an old abandoned manor in the woods. It seemed as if the large house once caught fire with part of its structure being close to collapsing and walls that were singed to its grounds. A rusty old Bentley covered in moss was sitting in the empty fountain at the porch, almost as if the person who drove into it was in a haste. Wayan was not able to piece together the tragedy behind the mess but whatever it was, it could not have been pleasant.

Night began to fall and Wayan was left with no choice but to take shelter in the abandoned manor. He knew that it would not be wise of him to maneuver through the forest in pitch dark and decided that he would resume his route back home as soon as dawn breaks. He used the flash light on his smart phone to find his way through the deep, dark and dusty interiors of the house. What he found next with the dim light of his dying phone was beyond astonishing.

There were black-and-white photographs, probably taken in the early 20th century, of a wealthy couple hung on the moldy walls of the manor. The man was in a tuxedo, with his hair sleeked back into a comb over and a gelled-up handlebar moustache, while the lady looked like she was dressed in the roaring twenties. The frames that shielded the photographs from decay were all covered in speckles of dried blood, similar to a scene from a horror movie. Wayan could not help but notice an unfamiliar figure within the many photographs of the couple. It was a girl who looked like she was no more than eighteen. The way she was dressed suggested that she probably worked for the couple as a housekeeper. Her gaze was alluring yet somewhat menacing.

As Wayan made his way down the dining room, he flashed over the writings knifed to the walls. One wrote “Beware of the witch! She’s watching us!” and another wrote “Her insatiable bloodlust! Hide the men and protect the children! For it is them she seeks!” The writings sent chills down Wayan’s spine. The air was cold but he was sweating from his palms and feet. He then sensed a presence in the room. It was almost as if someone was heavily breathing down his neck. Without looking back, Wayan raced into the halls as fast as he could.

He soon reaches a dead end where he could no longer distinguish right from left. Wayan turned his flashlight on to reveal a huge mirror that impeded his way. The mirror was covered in bloody fingerprints and a finger-painted writing that reads “Look out for Teteque!” And at that moment, he realized that he has trespassed and led himself into the den of the monstrous demon that brewed fear in the villagers. As he took his focus off the writing, he spotted a vague reflection of a boney old lady with piercing red eyes standing behind him. With sheer force, he immediately breaks into the mirror and ran to find an exit. He could hear her grunting while she chased him down.

Wayan quickly entered a dark room and locked the door behind him. He was breathless from all the panic that struck him and fell to his knees. He teared at the thought of him being hunted down by Teteque before he could make his way out of the endless labyrinth. He reached into his pocket for his phone but mysteriously found crumpled paper packaged around it instead. He unwrapped the paper and hovered his phone over the contents of it to unveil a note. It reads:
“To whom it may concern,

The Missus killed the Master today. He was a good man. He never meant any harm. He treated me with respect unlike that old cunning bitch! She never gave him what he deserved. And I was simply repaying his kindness. I loved him. And he loved me. I was bearing what was ours. She took it away from us. She left me bleeding next to his dead body. So I killed the Missus before she could take off. She was not a good woman. I lost everything. So help me, Lord. Let me find what I have lost. For not another moment is worth living if I am already dead inside.

There was nothing more to it. Wayan could not believe what he just read. There was nothing but vengeance blanketed under its tone. His phone started to shut off. And as his light flickered, Wayan realized that he was sitting next to a skeleton all this while. Just before his light died off, he came face to face with the demon Teteque, What was left of this misfortune was Wayan’s unfading scream which slowly echoed through the walls of the manor.

It was in the late 1920s when Dewi, an attractive 18-year-old orphan, got her first job as a housekeeper to the Lesmanas, a wealthy couple who owned a huge manor in the outskirts of the Wesya Village. Hendra Lesmana was a charming young man who became the direct successor of his family-owned business in exporting rubber to neighboring regions after his father passed away. Ri Lesmana, his tall and sociable wife, was more involved in securing business deals with potential clients overseas. The two had no children since Ri was not able to conceive so they spent most of their time on work.

Ri had to travel abroad often for business trips while Hendra manages the exports locally and works mostly from home. In her absence, Hendra and Dewi spent most of their time together and they began to develop romance over time. They kept their love affair a secret for the longest time until he got her pregnant. He did not wish for his wife to find out as he knew this could possibly shatter their marriage. He had always wanted a child to call his own.

Ri returned home before Hendra could send Dewi away to deliver his baby in secrecy. She got suspicious over Dewi’s growing womb and confronted her when they were alone in the manor. After she found out about their secret love affair, Ri waited by the porch for Hendra to get home. Hendra swearved and drove their Bentley into the fountain when he was stopped by his furious wife.

They quarreled all afternoon and Ri, in the heat of it all, accidentally stabbed her husband with a kitchen knife. Dewi rushed into the bedroom to attend to a dying Hendra. Ri caught her off-guard and kicked her in the womb several times before she fled the manor with her belongings. Dewi was left to bleed next to her dead lover. But whether she survived the tragedy is still a mystery.