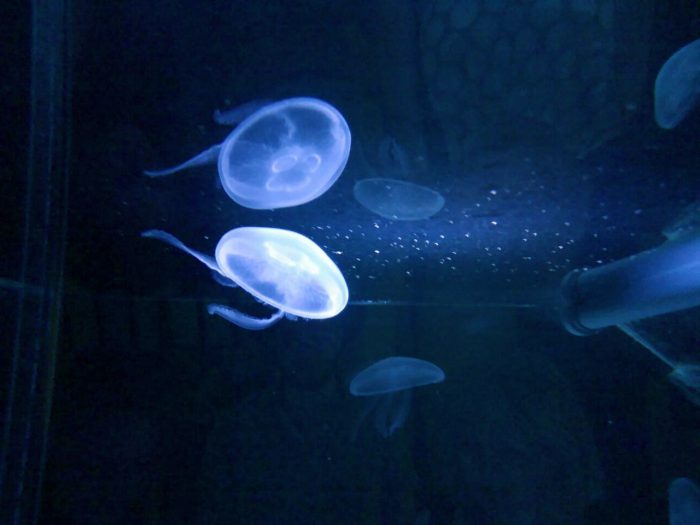 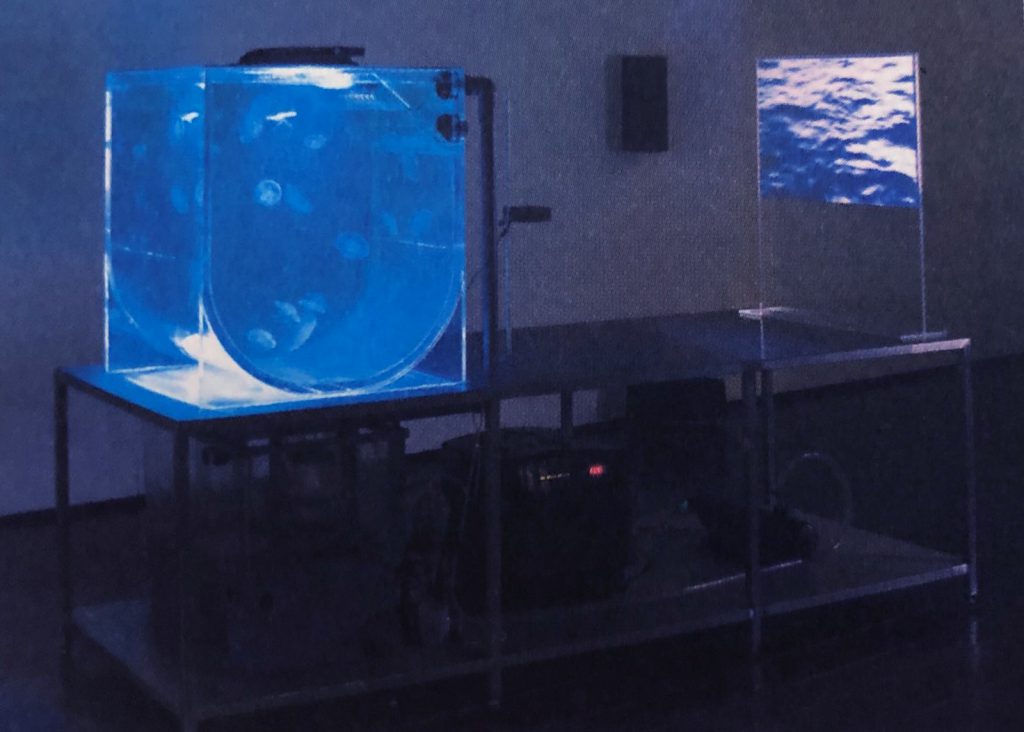 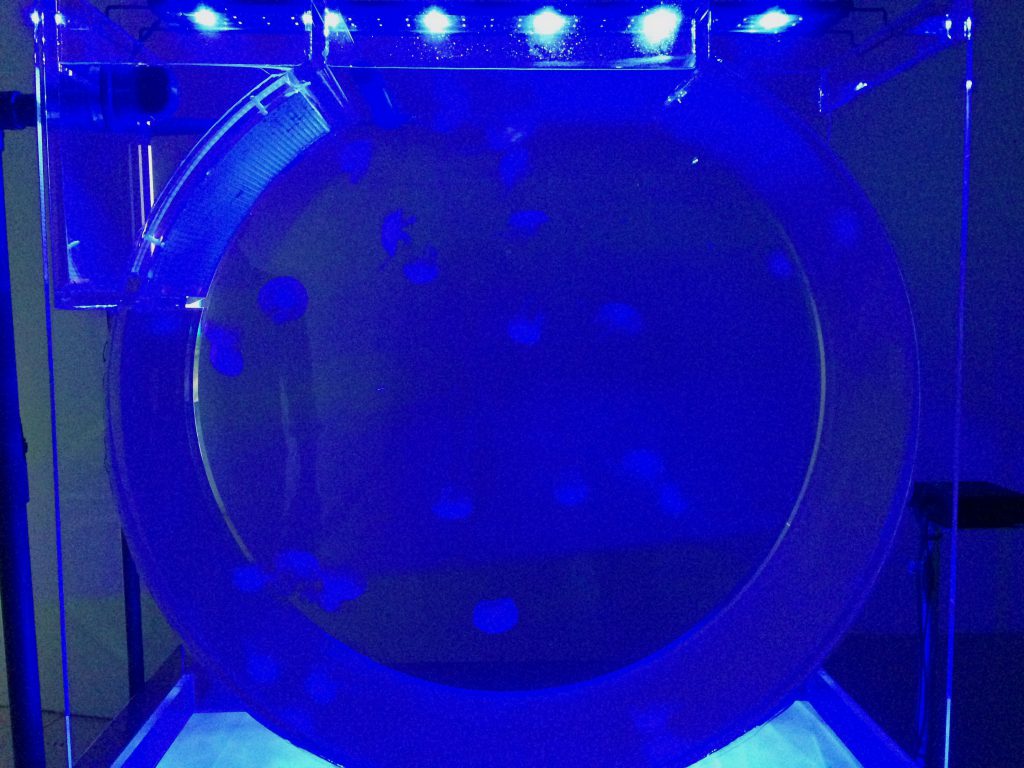 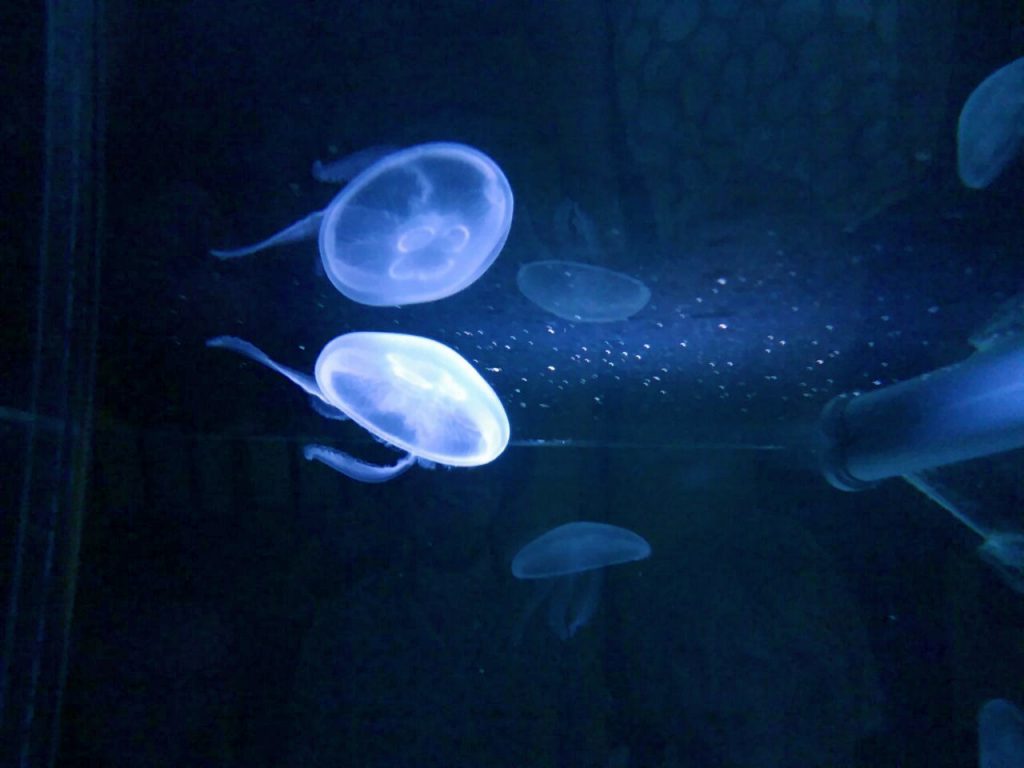 Stepping into The Oceanic exhibition at the NTU Centre for Contemporary Art Singapore, the Tamoya Ohboya, an installation by Tue Greenfort, caught my attention. The neon cyan light that glows beyond its display with the very organism that the piece was named after, hovering and floating inside the aquarium was a visual ecstasy. It exposed me to the feeling of calmness yet a certain degree restrain as it immerses its viewers into an artificial habitat.

The Tamoya Ohboya is a species of box jellyfish that is native to the waters of the Dutch Caribbean islands. The species have been in existence for over 500 million years, and thrives only in ideal temperatures and water conditions. Due to the warming of the ocean’s temperatures, researches have observed an increase in the migration of these organisms to new geographical waters.

Greenfort, a Danish artist mostly known for his works revolving around the themes of ecology and the environment, delved into replicating the ideal habitual conditions to sustain the Tamoya Ohboya. By combining art and technology, he was able to create an artificial habitat for these jellyfishes with a tank that was designed to closely resemble the ocean, and devices that maintains and regulates the perfect temperature. This piece was a response to how the environment is changing and proposes a way we, as humans and as a community, could take to preserve delicate life-forms like the Tamoya Ohboya from dying out due to years of destructive human interventions with nature. The concept ties in well with other pieces in the exhibition that urges environmental and economic issues.

Although I find the work compelling in its ways of creating awareness to the mass while highlighting the importance of conserving the environment and how it correlates to the human society, stripping the jellyfishes off its natural habitat and confining it in a small aquarium in the name of art is not an appropriate measure to take. Greenfort’s attempt to display these creatures could be seen as an adverse response to the problem itself rather than the message that he initially intended to tell.

But is there an ethical issue here that needs to be straightened out when it comes to having works like this publicly displayed? Was it necessary for the artist to take live specimens of the creature itself to bring across a message? With the concept of tapu being discussed in the lectures and how we are very informed that there are certain rules and prohibitions practiced in the Polynesian culture concerning the conservation of the very home we live in, are we really protecting the environment? Or is this just another evidence that we are simply causing more harm to it? 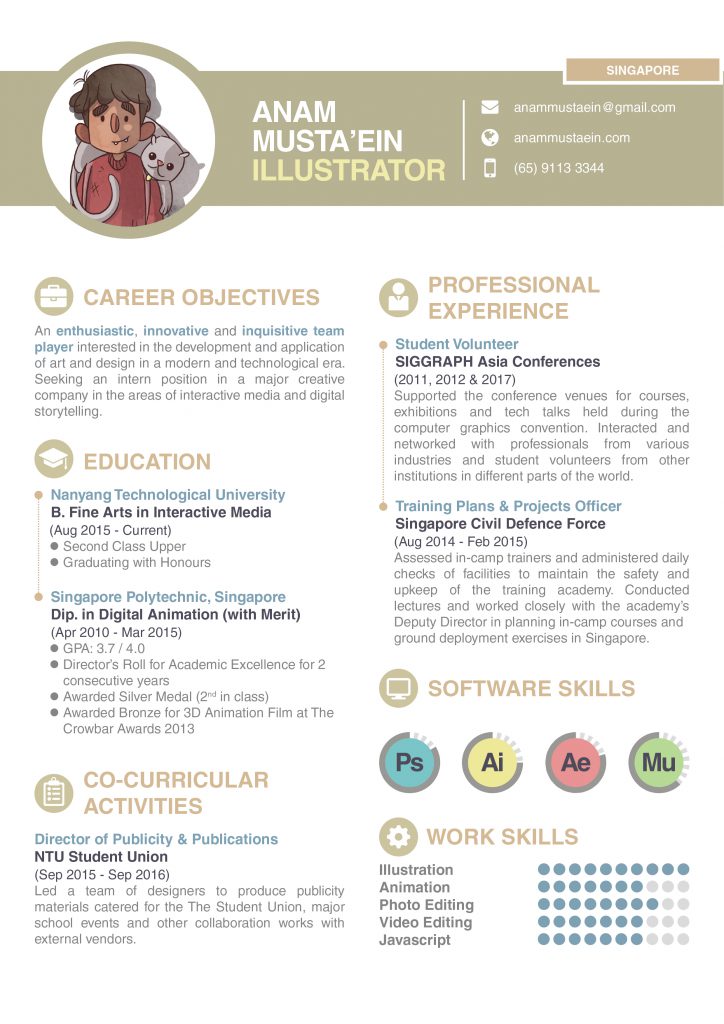 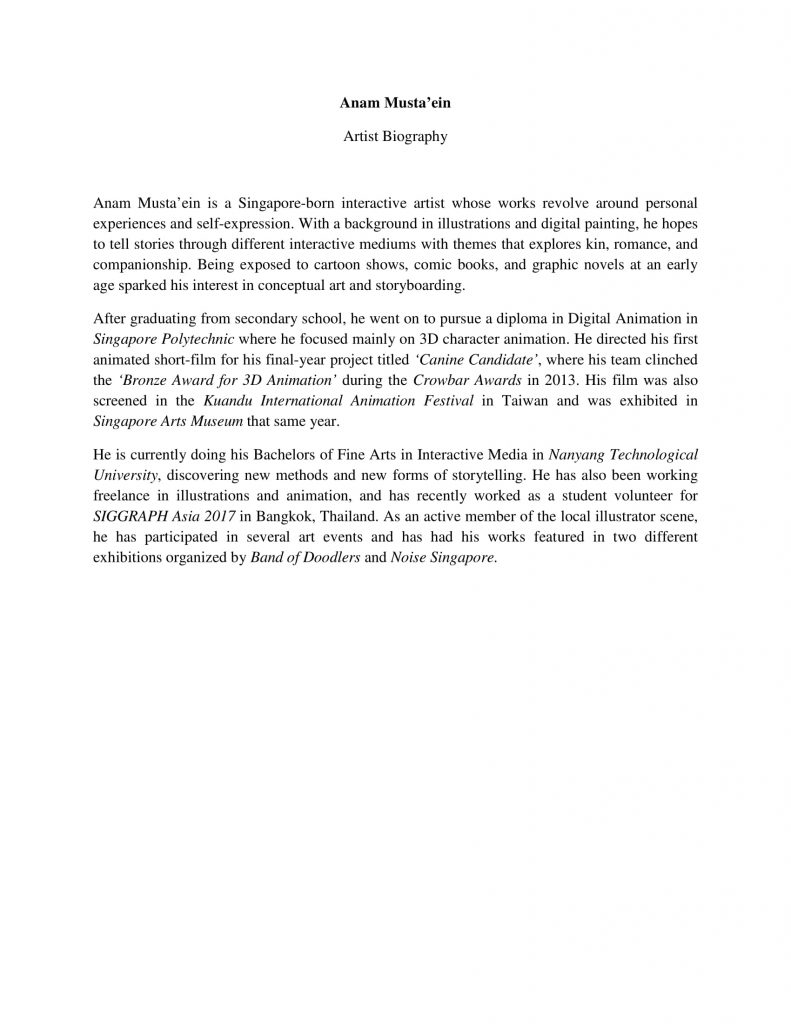 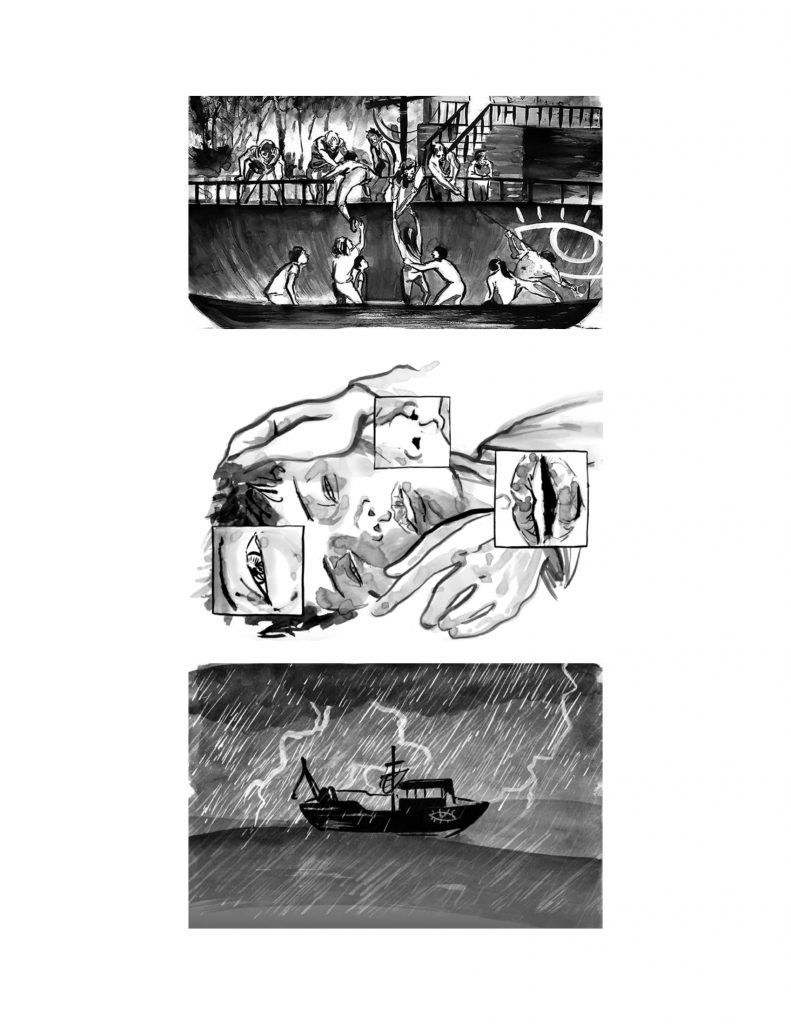 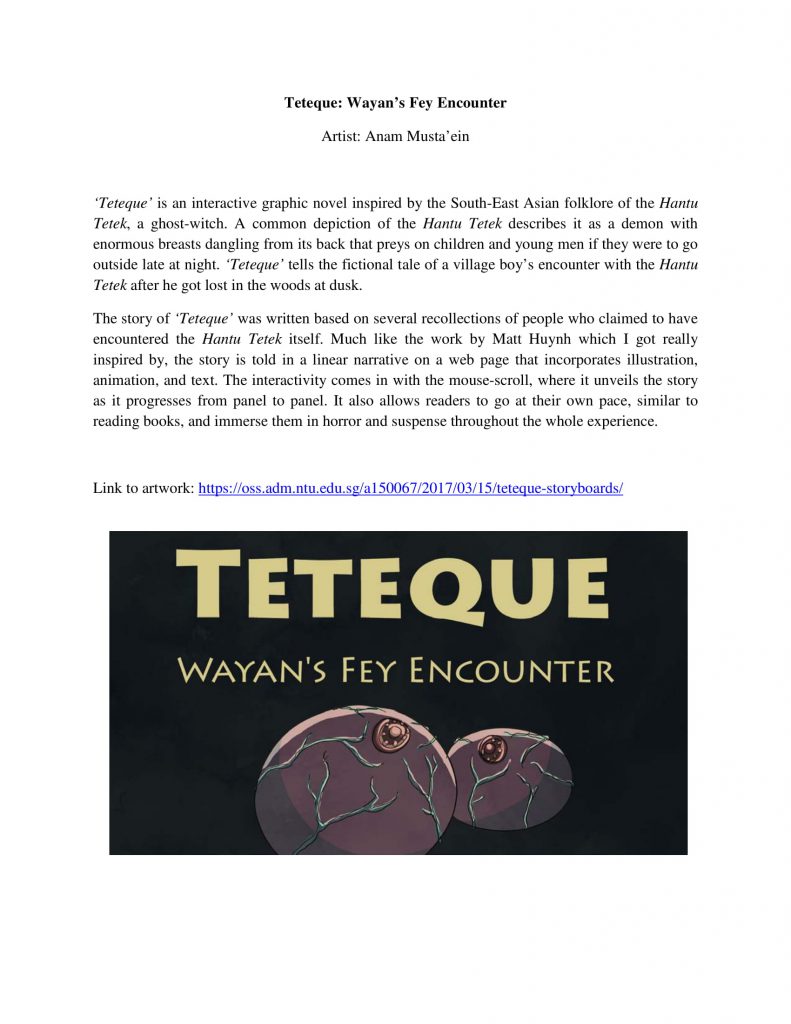 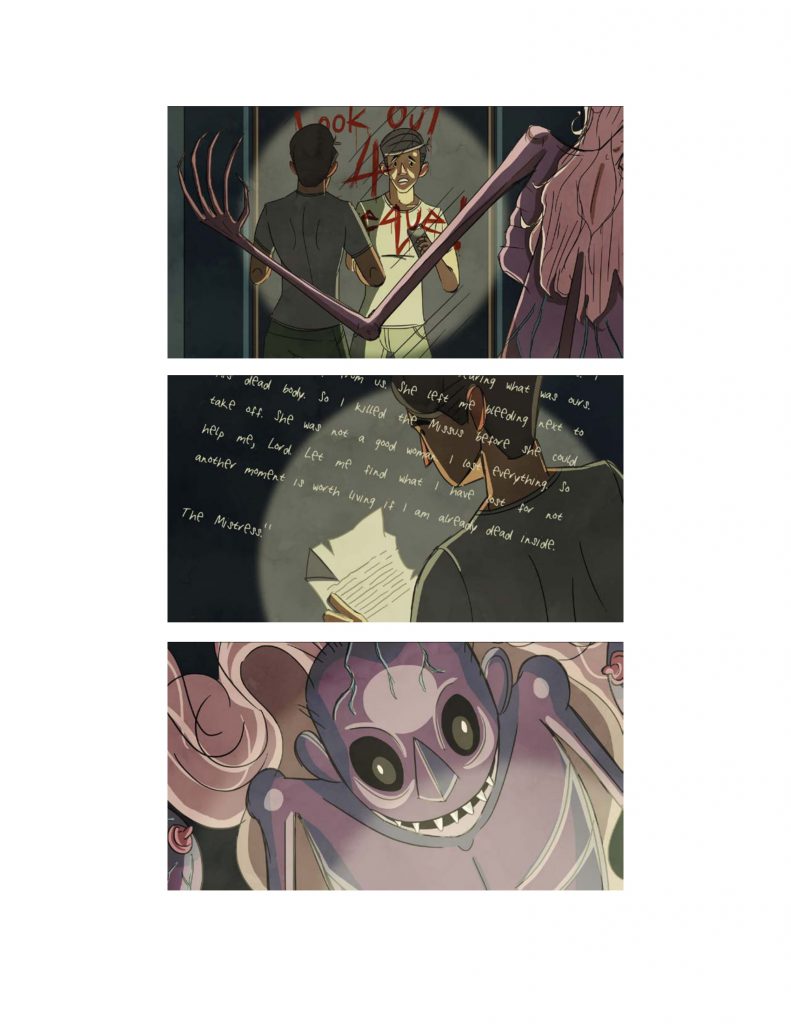 Conjoined Shirt sticks two people front-to-back together limiting their movementsforcing them to synchronize their steps.