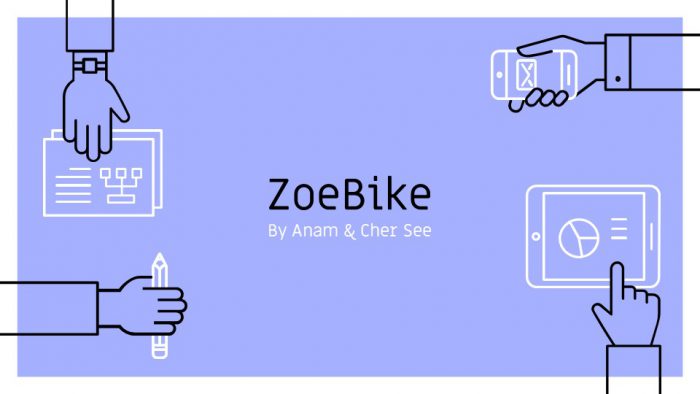 The ZoeBike is a spatial device that aims to promote an eco-friendly lifestyle by combining the bicycle and the zoetrope. The rear wheel of the bicycle is used as a gear to spin the zoetrope to display a light-projected animation of a running deer. As the user mounts the bicycle and holds on to the handles, a projected video plays in front of them to simulate the feeling of actually cycling out in the mountains to be closer to nature.

With the current state of our planet, as excessive amounts of carbon is being emitted every day, straining on our climate and the Earth’s ecosystem, it is important that we realize and discuss how we could change and improve our daily activities to make sure that we maintain a sustainable way of living.

Taking public transportation and driving an electric car are just some of the ways where we could reduce air pollution and increase fuel efficiency. Excessive use of fuels could possibly destroy the environment, depleting wildlife as well as natural resources.

The ZoeBike creates a space for users to realize how important the environment is to us and how it provides shelter and resources for millions of species. The deer, being one of the most common species found in the forest, is used as a representation of the very planet we live in. If we stop caring for the Earth, we might not be able to see deers in the future.

That is why we have decided for the light-projected animation of the deer to only be played if the bicycle is being pedaled. If the user stops pedaling, the animation would slow down and come to a stop. Having pressure sensor pads on the handles of the bicycle to start and pause the POV video symbolize how important it is for us as the most intelligent species on the planet to maneuver carefully to be able to move forward.

Changes to the Original ZoeBike Design

The previous ZoeBike had several flaws. One is that the support that is used to hold the zoetrope up was not strong enough, resulting in an inconsistent and lop-sided animation of the deer. We installed wires and fasteners to make sure that the PVC pipe (previously an uneven bamboo pole) was stable enough to bear the weight of the zoetrope. The PVC pipe is then further secured with a plastic chair and bricks to elevate it. 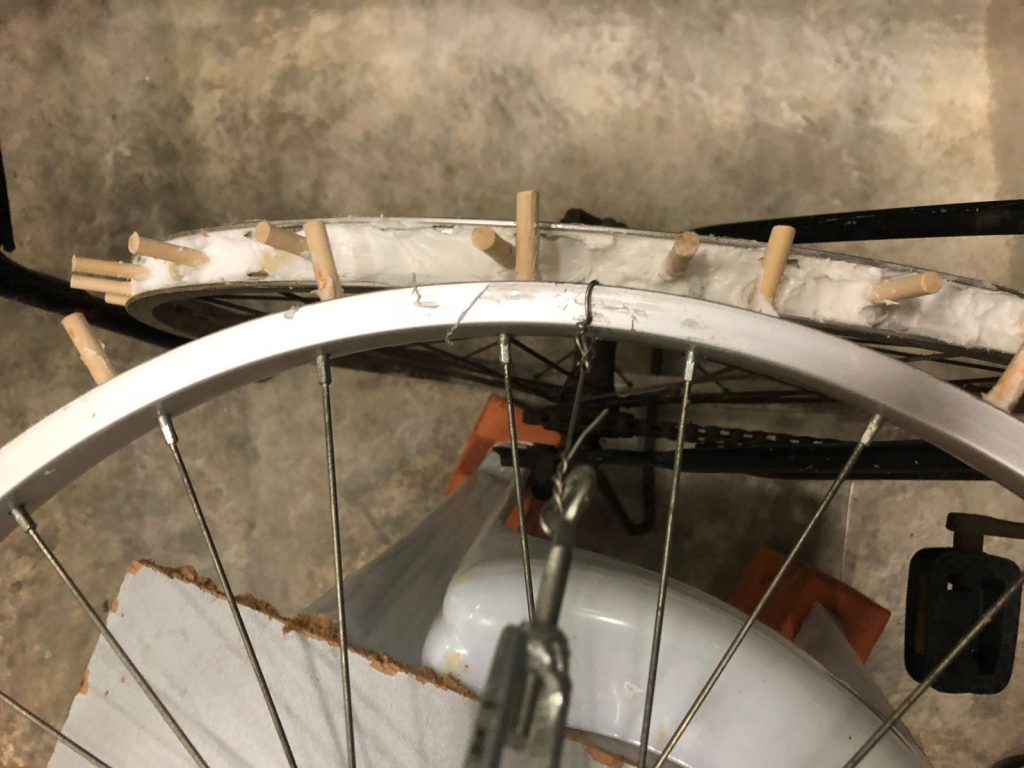 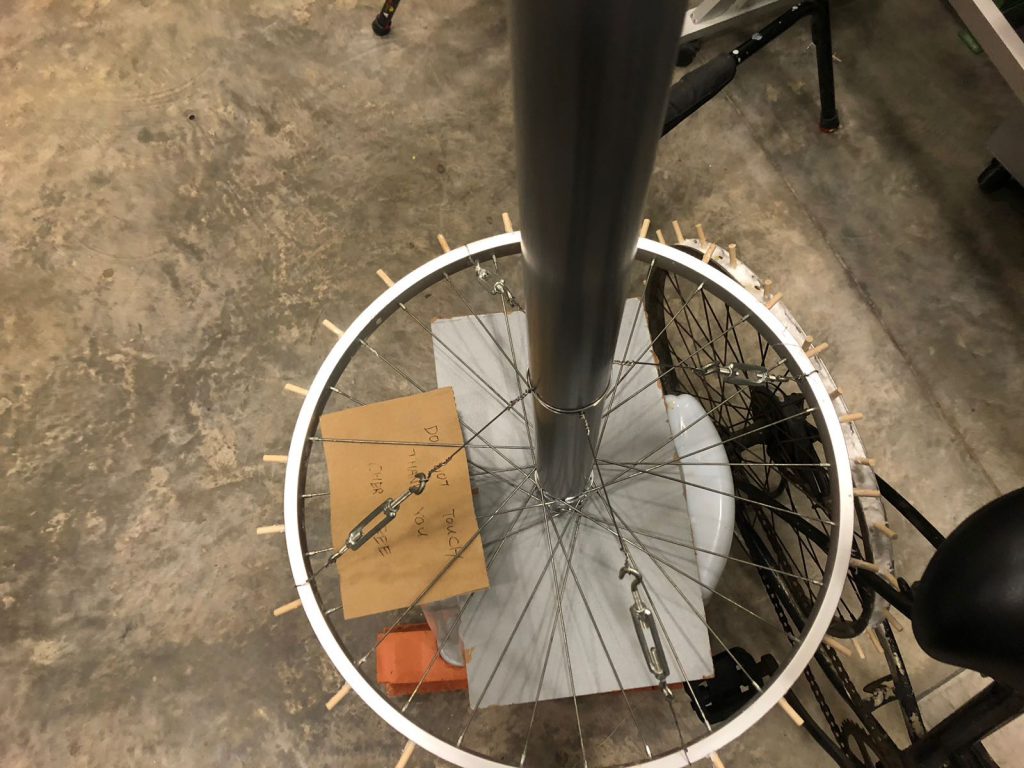 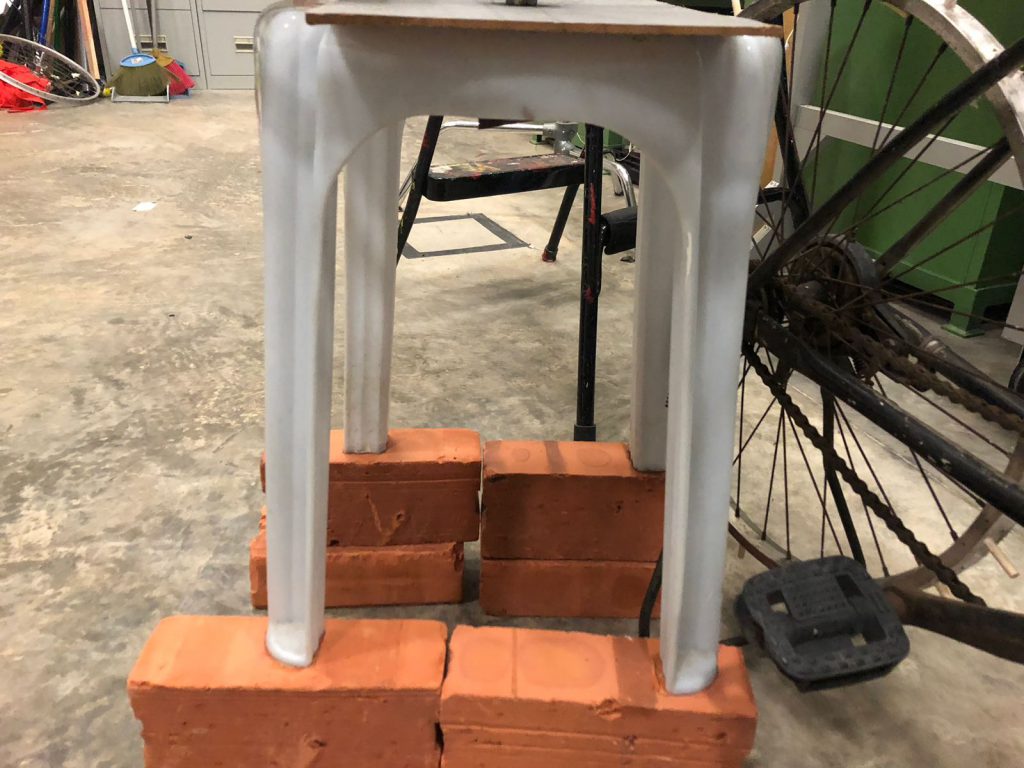 The zoetrope’s design was also changed with the silhouettes of the deer inverted to have it be projected better. We have decided to use the flash light in strobe mode as it allows for sharper projection of the animation. 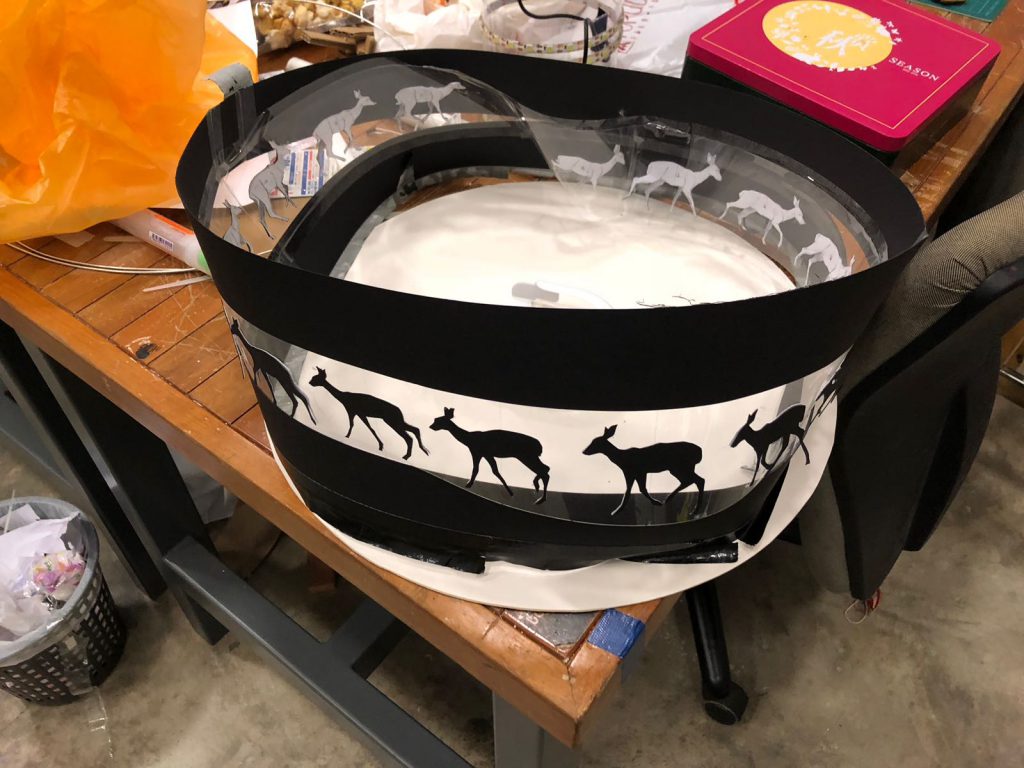 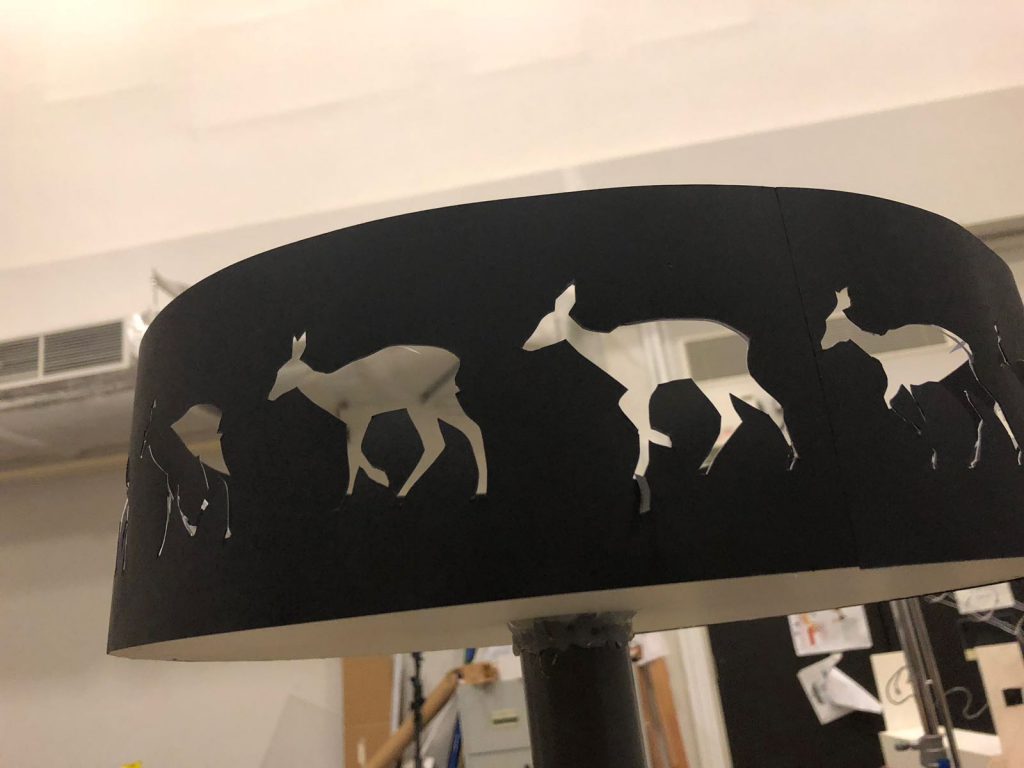 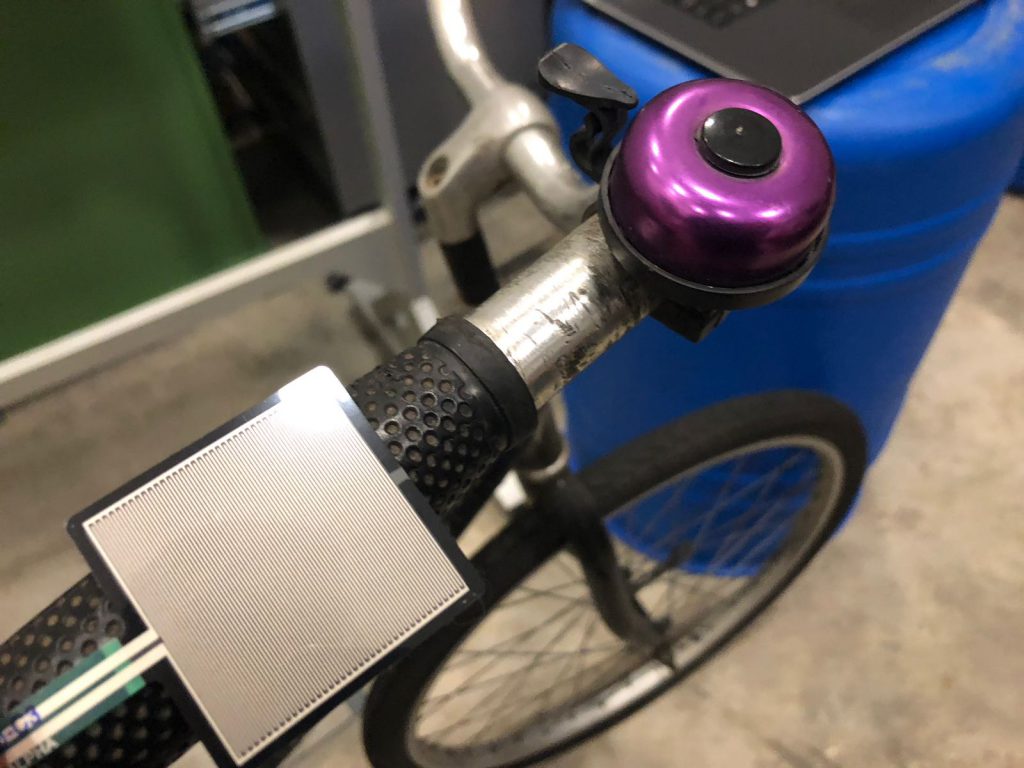 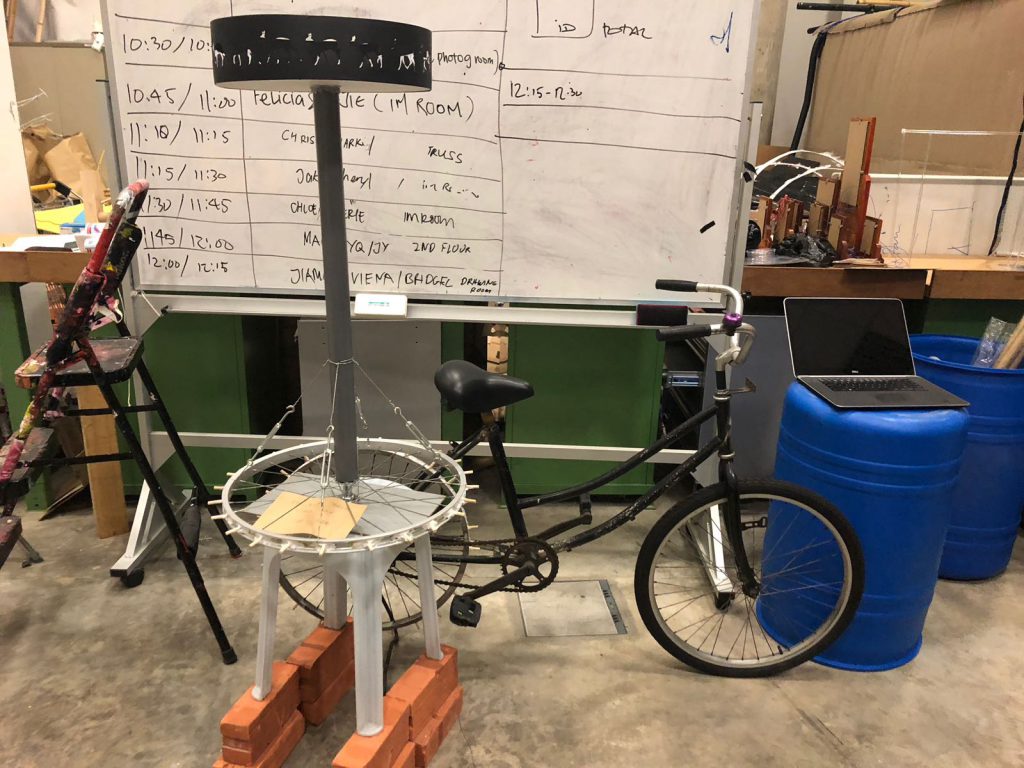 The ZoeBike is a spatial device that allows the user to project a zoetrope animation onto the walls of a dark room that uses the power generated by pedaling a bicycle.

Initially, we wanted to do project an animation of the growth of a plant from seedling to adult tree. However, we realized that in order to present the life cycle of a plant, we needed to work with more frames then what could be contained within the dimensions of the zoetrope. So instead, we decided to go with the projecting the walk cycle of the animal that is regarded as the guardian of the forest, the deer. The animation consists of 17 frames. Below is a video of how the movement of the deer should look like when it is projected onto the walls of the dark room:

Here are the tools and materials we have used to construct the ZoeBike:

Here are some photos to show of how the bicycle component of the ZoeBike is being constructed: 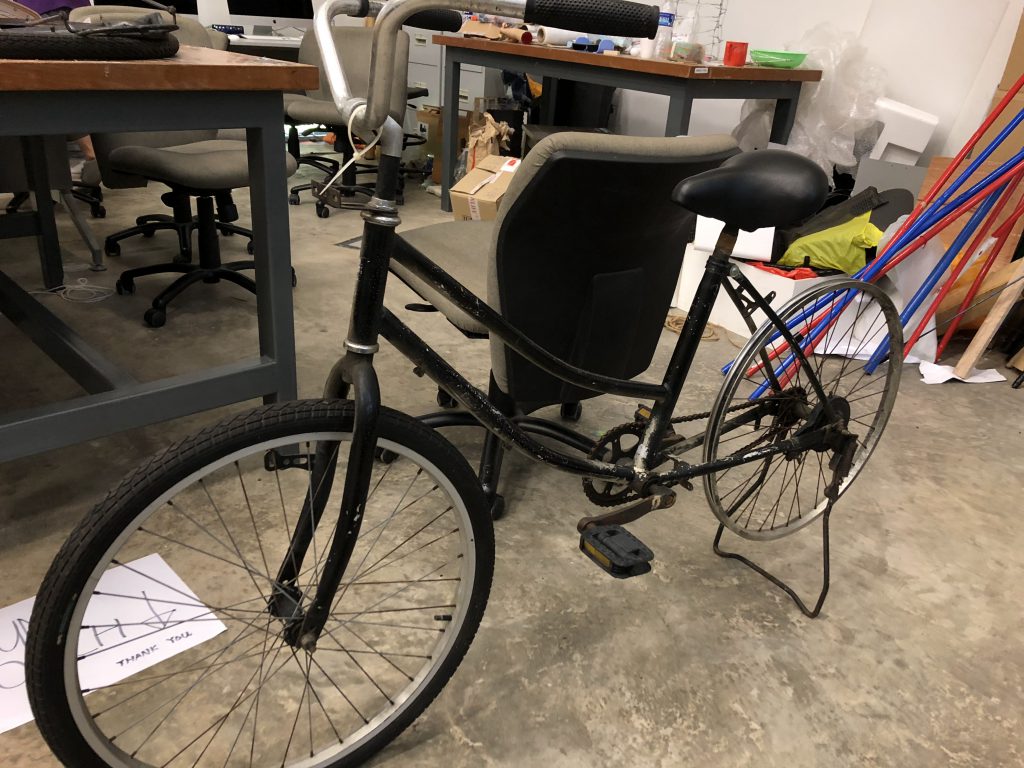 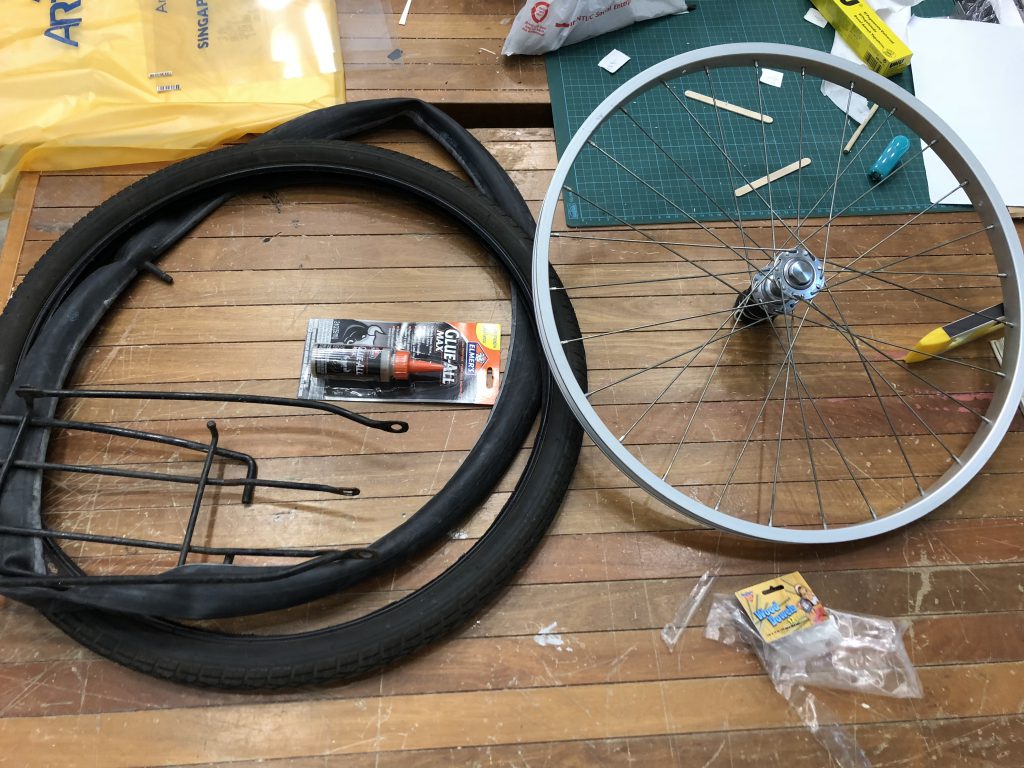 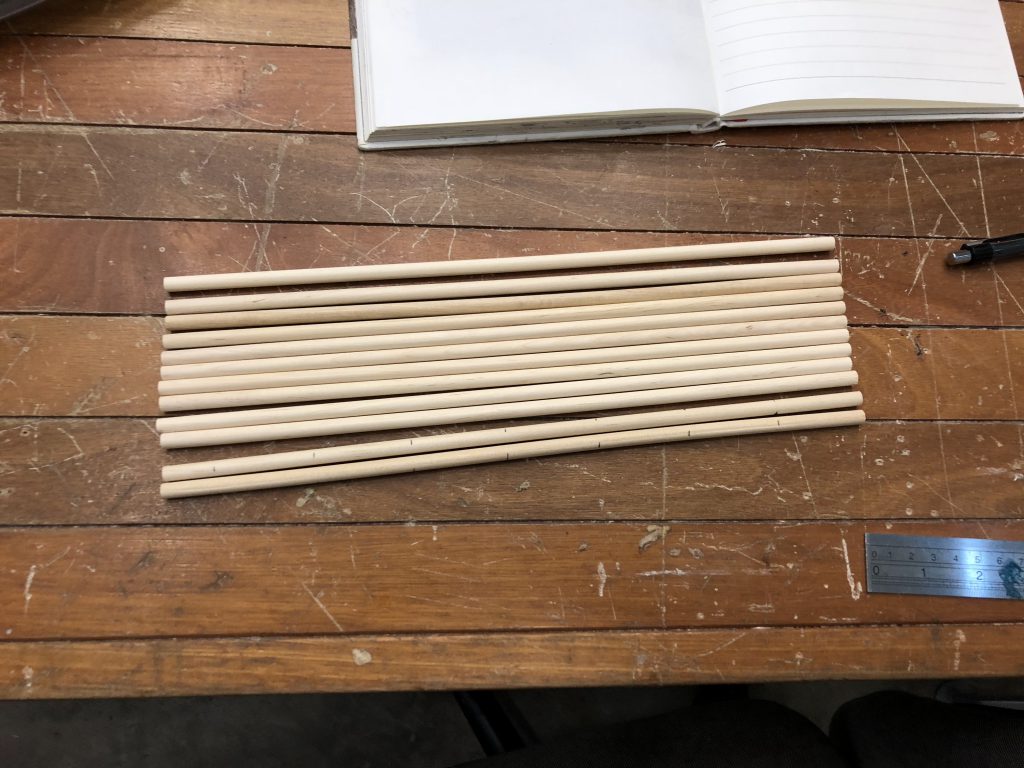 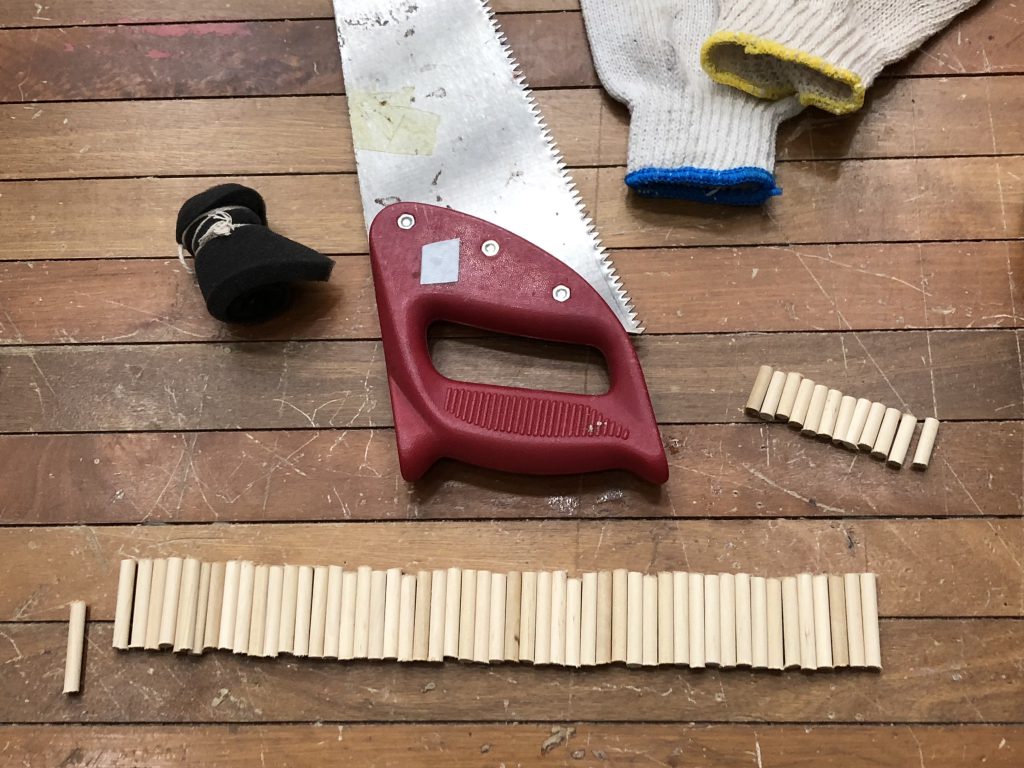 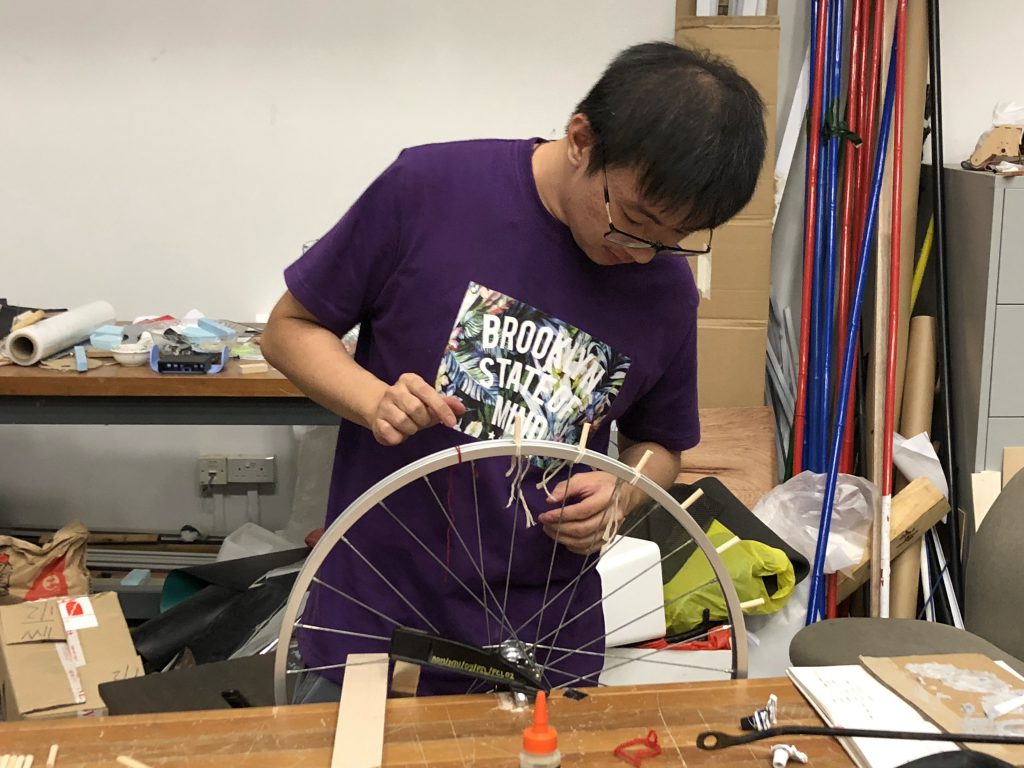 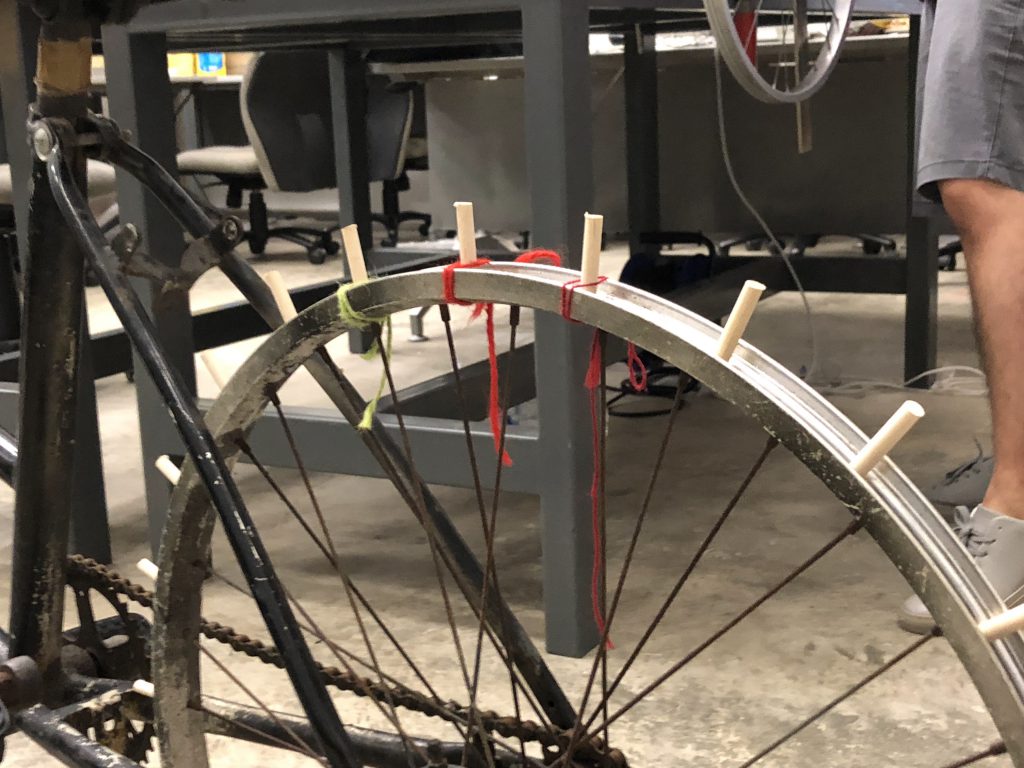 Here are some photos to show how the zoetrope was constructed: 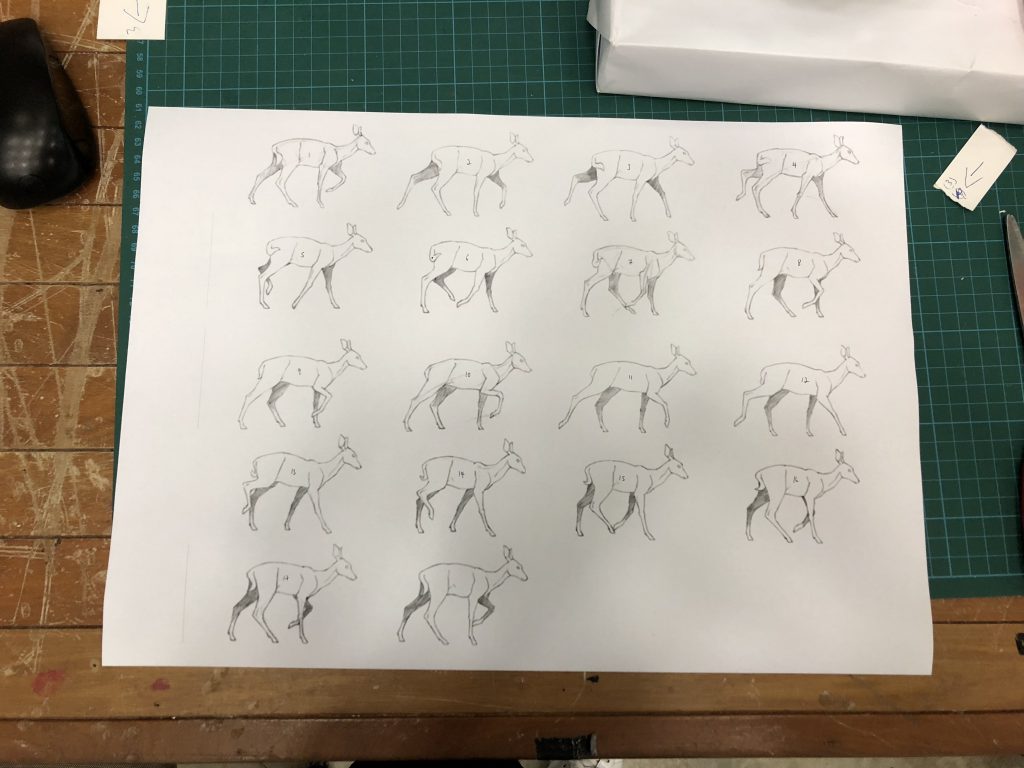 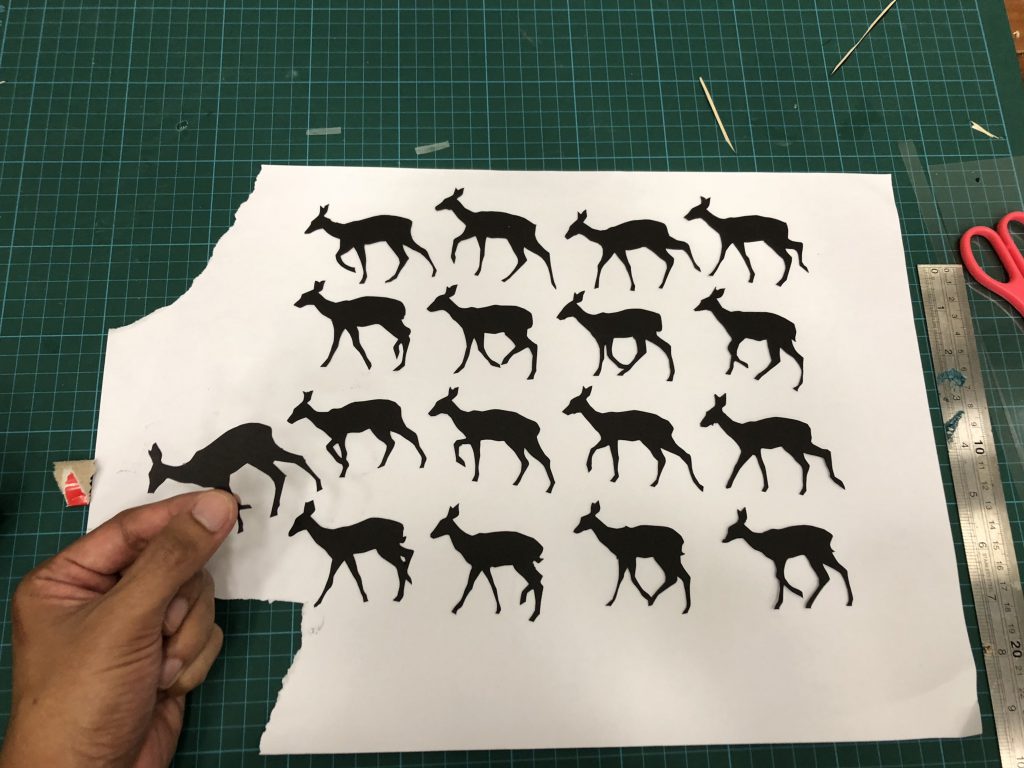 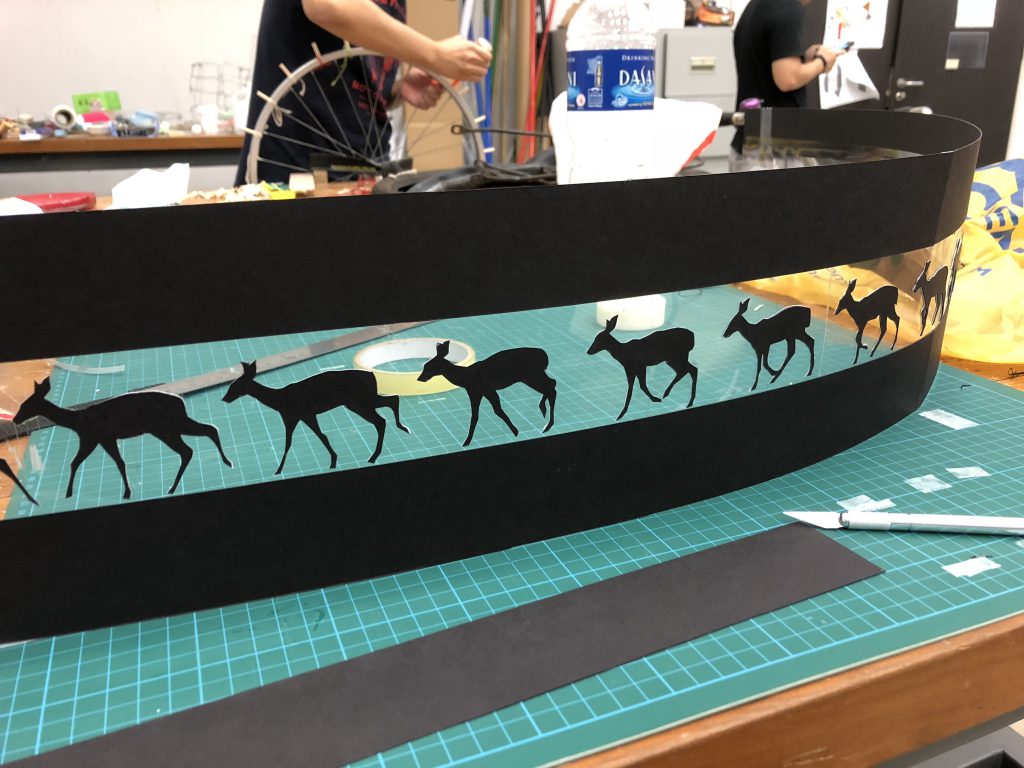 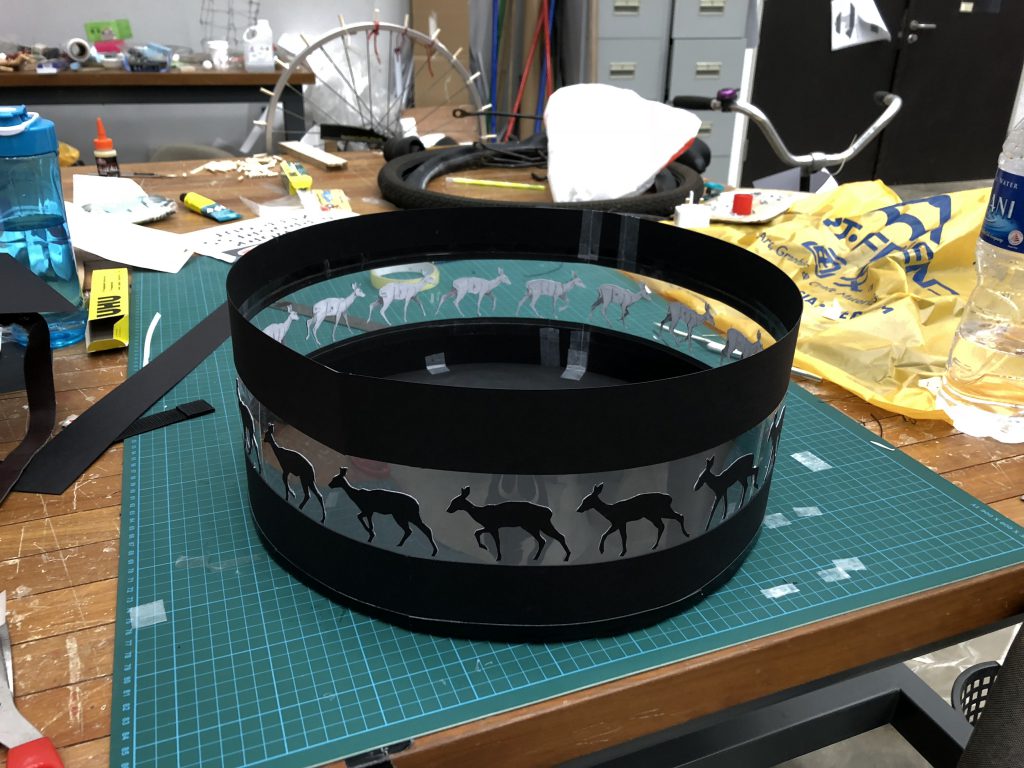 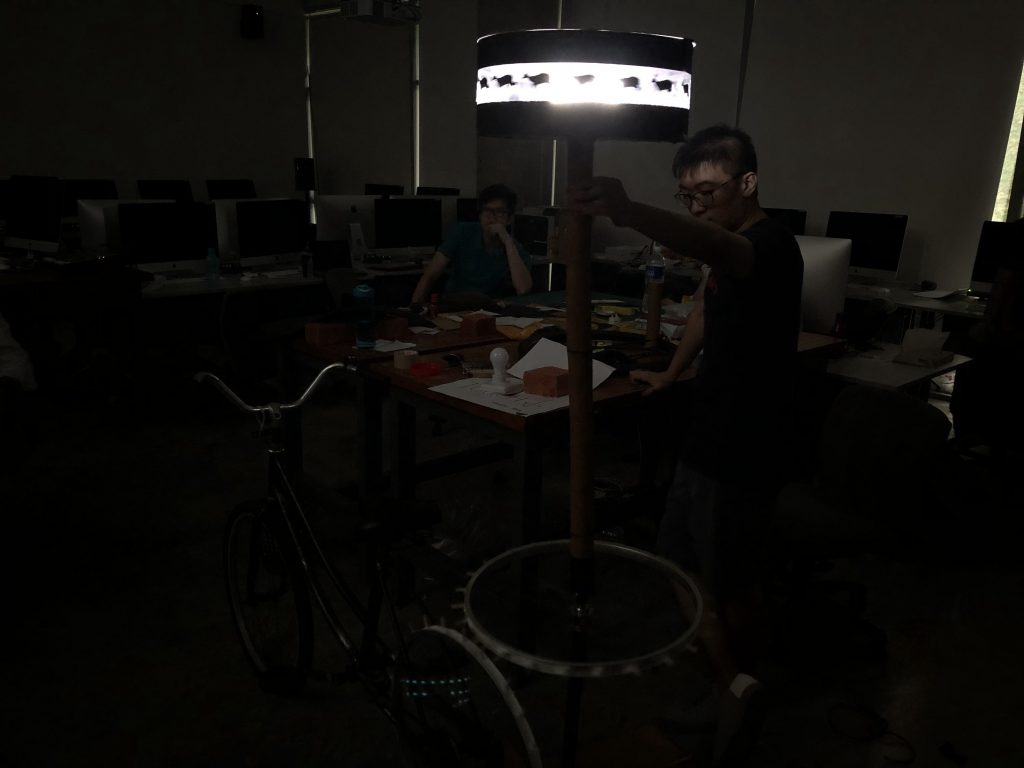 Below is a video to display the process of making the ZoeBike and how it works:

Upon seeing the results of our ZoeBike, we realized that there were several areas of improvement that we should work on before moving on to the next step of digitalizing our project for the final submission.