Telematic Lunch is a collective Facebook Live broadcast between 4 people streaming from 4 different locations, having a conversation over pizza in the third space. The project aims to emulate all the elements you get from having a meal with friends in the physical space and bring it into the virtual space, eliminating distance while preserving the actual atmosphere of sharing the same dining table.

We got inspired by several examples that were discussed in class which were successful in their attempt to imitate physical human interaction in the virtual space.

‘The Big Kiss’, a performance installation by Annie Abrahams, allowed participants to engage in a communal kiss with strangers without any physical contact. The participants were captured from different cameras and then merged into one screen to make it seem as if they were kissing in real life. What has set this interaction different from its traditional counterpart is that participants did not get the sensation of touch while engaging in such activities. The element of play became more apparent and unlike physical kissing, participants were able to see themselves on screen, making them much more self-conscious of how they portray themselves. 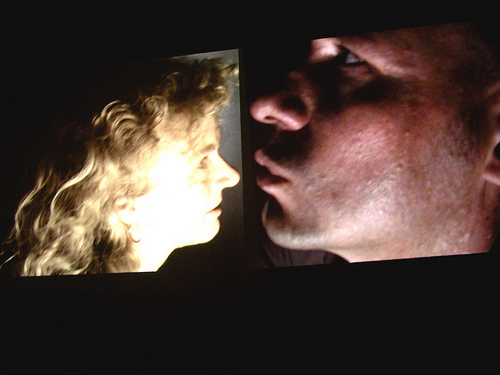 ‘The Big Kiss’ by Annie Abrahams

Another example that we got inspired from is ‘Telematic Dreaming’, an interactive installation done by Paul Sermon in 1993. The installation was meant to put two lovers, who were miles apart, together and converge them into one shared space. The individual video images of each lover were projected onto each other’s bed, allowing them to lay next to each other and immerse themselves in an intimate connection, much like how it is in real life, without any physical contact. Video calls were not in existence at the time but this installation is imperative to make many realize that distance could no longer be seen as a barrier.

‘Hole In Space’ by Kit Galloway and Sherrie Rabinowitz was another piece that inspired our Telematic Lunch project. This video installation linked bigger-than-life displays in two different cities, one in New York and the other in Los Angeles, with a satellite feed. With no public announcements to let the word out about the project, it managed to stop passers-by on the streets to interact with people in the video and on the other side of the screen. It got the people to interact with friends and family members that they have seen in years as well as strangers to engage in conversations.

‘Hole In Space’ by Kit Galloway and Sherrie Rabinowitz

There are several attributes from these examples that we have adopted in our final project. We were able to communicate with each other despite the not being in the same room, we were able to converge our individual videos into one screen, and most importantly, we were all sharing the same virtual space in real time.

The idea of this final project was to have pizza and play a game of ‘Never have i ever’ in telematic space within two ‘window’ grids to make it seem like we were all sharing the same dining table from each other’s remote places. 2 of us (Mirei and Anam) positioned ourselves in the foreground with orange screens nailed onto the walls behind us while the other 2 of us (Isaac and Win Zaw) positioned ourselves in the background within the space provided in the area of the orange screens which has been chroma-keyed out. Our tables were then aligned to give the illusion of it being just one table with the pizza box placed in the center of the screen.

In terms of recording the broadcast, Mirei and Anam used the webcams on their laptops while Isaac and Win Zaw used their smart phones to stream live. We were all using different rooms in ADM to perform our broadcast. With all of us streaming on our own Facebook accounts, Isaac equipped himself with a laptop to fetch all those streams into OBS (Open Broadcaster Software) while overlooking all the activities on-screen and collectively stream a second video on Isaac’s Facebook account. Since Mirei, Anam and Win Zaw were not able to see each other in the collective broadcast, we decided to communicate through Skype call instead.

On top the having the orange screens as ‘windows’ for the broadcasters in the background, Win Zaw wore a green suit to have a starry GIF animation chroma-keyed into it, creating a third level into the chroma key and make the broadcast much more interesting.

Setting up the orange screens, the tables and the position of the cameras took us 3 hours before the collective stream. We needed to make sure that everything was aligned and that the videos were working in order. Our mode of communication through Skype call was only figured out after we realized that Mirei, Anam and Win Zaw would not be able to see everyone else during the broadcast. Isaac doubled up as a control room for all our broadcasts as he oversees all the activities while giving us specific instructions to make sure that we were on the same page. Video latency was a huge problem, especially with Win Zaw being in a room where bandwidth was pretty low. But the audio was much more in-sync since it was done through Skype call.

After the collective stream ended, we did realize that we came across several technical issues while broadcasting. Due to the latency, some of our actions were delayed and audio was not recorded on the collective stream. Fortunately, the audio from Anam’s stream was clear and we managed to edit it into the video in post-production.

Overall, Telematic Lunch was a success as we were able to execute all the objectives we had during planning. The lessons we had over the semester have certainly helped us come out with a final idea that incorporates so many different elements from different topics that were discussed in class. We explored the possibilities in the third space extensively and pushed the boundaries of physical distance and virtual communication.