Voila! Here are the final 6 illustrations for my Point of Views. 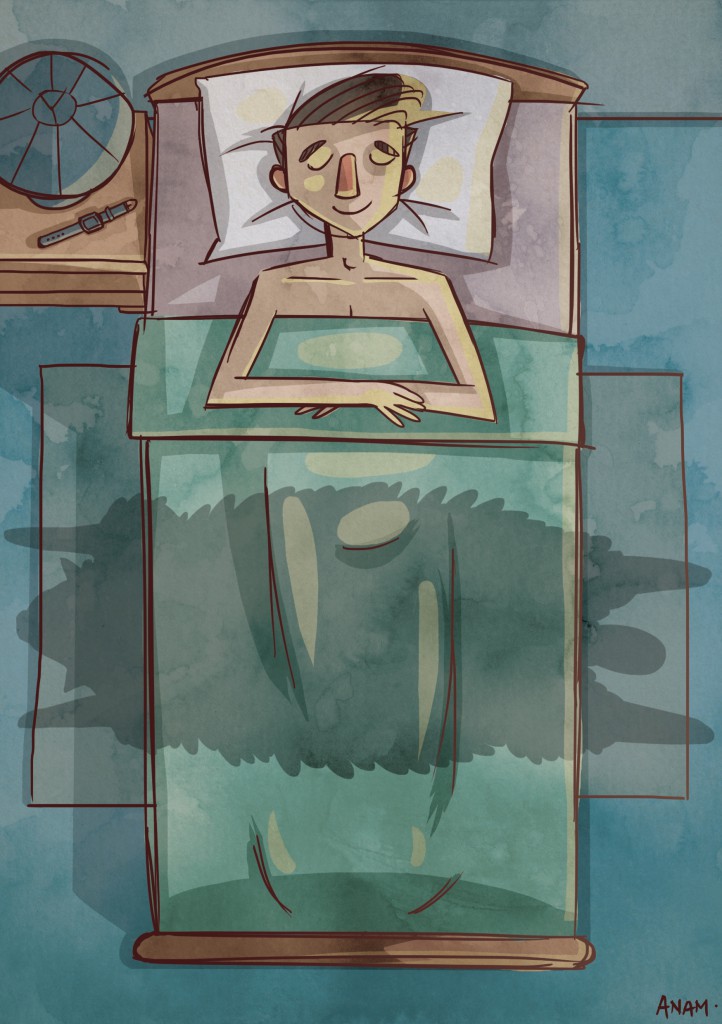 The sheep from the point of view of a shepherd iz dolla bill$! 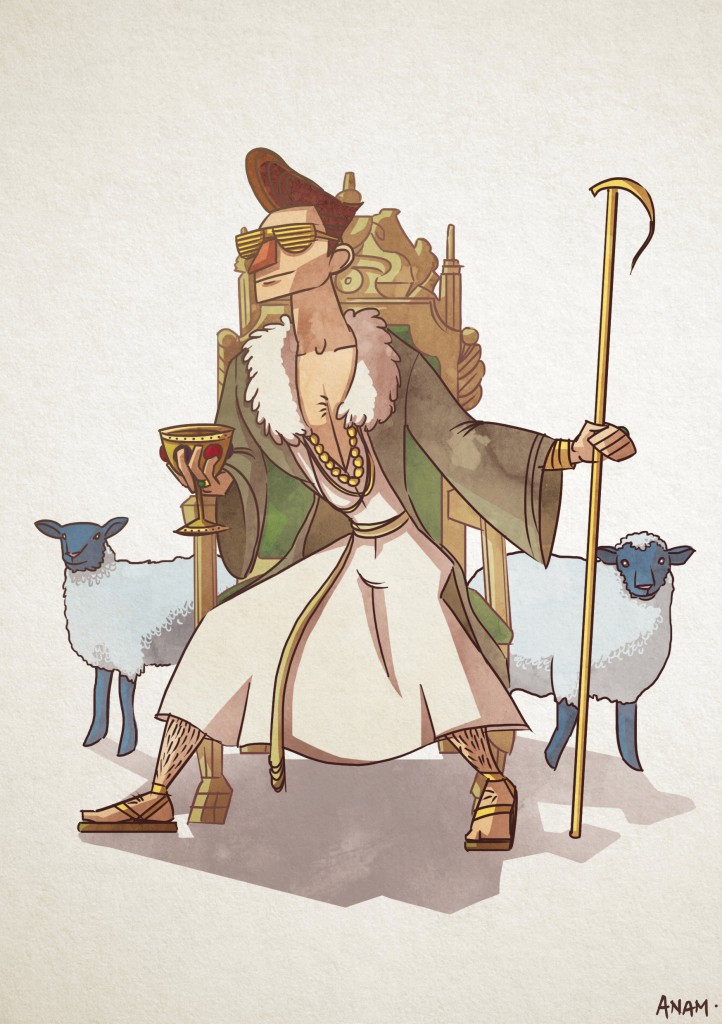 The sheep from the point of view of a shear is his 3 o’clock client. 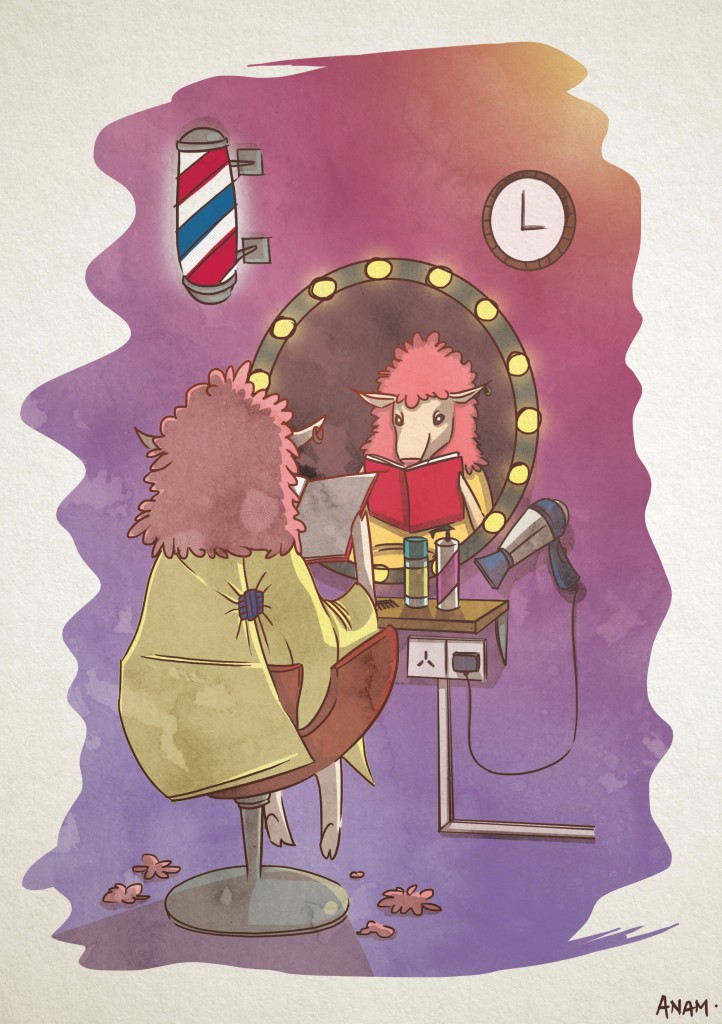 The sheep from the point of view of his wife is  baaad boy! 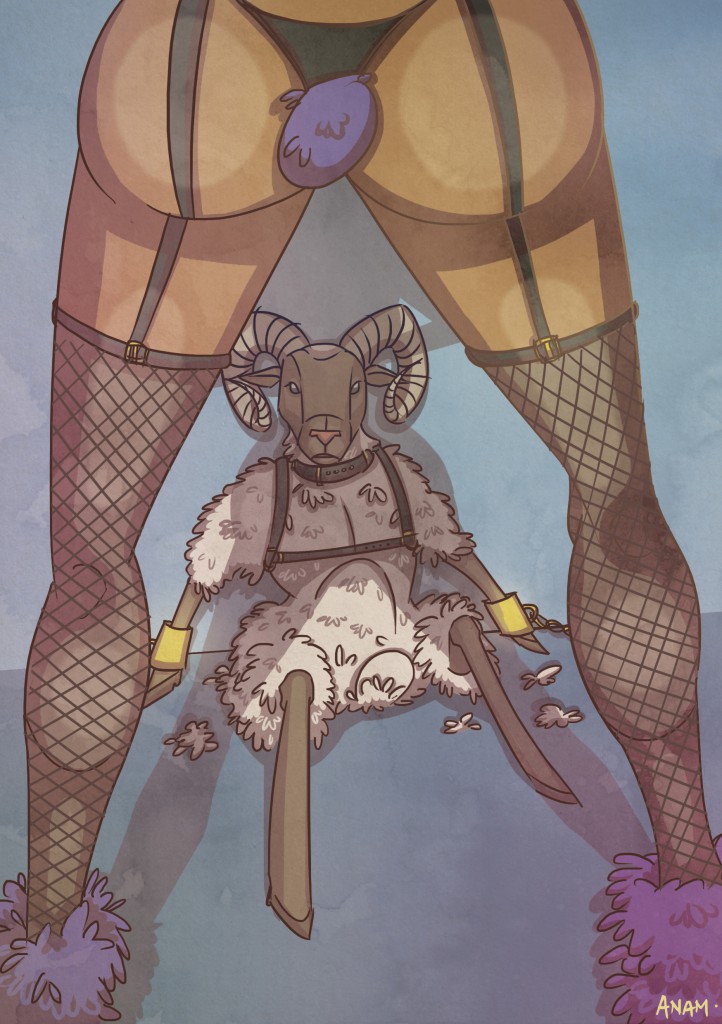 The sheep from the point of view of Damien Hirst is half a sheep. 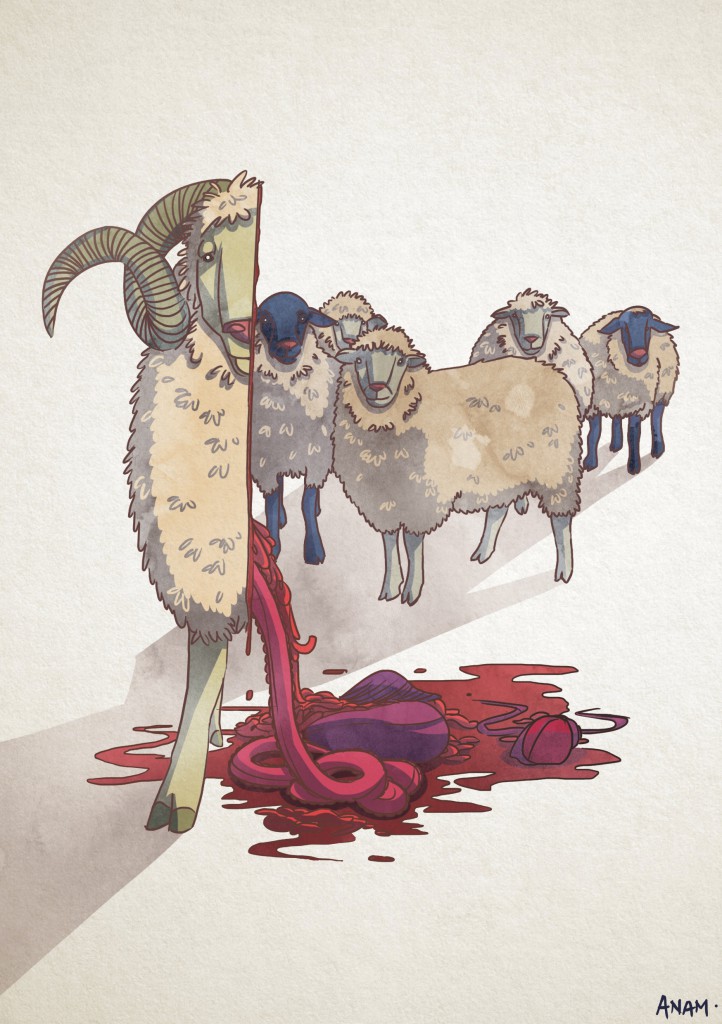 The sheep from the point of view of a goat is her gay best friend. 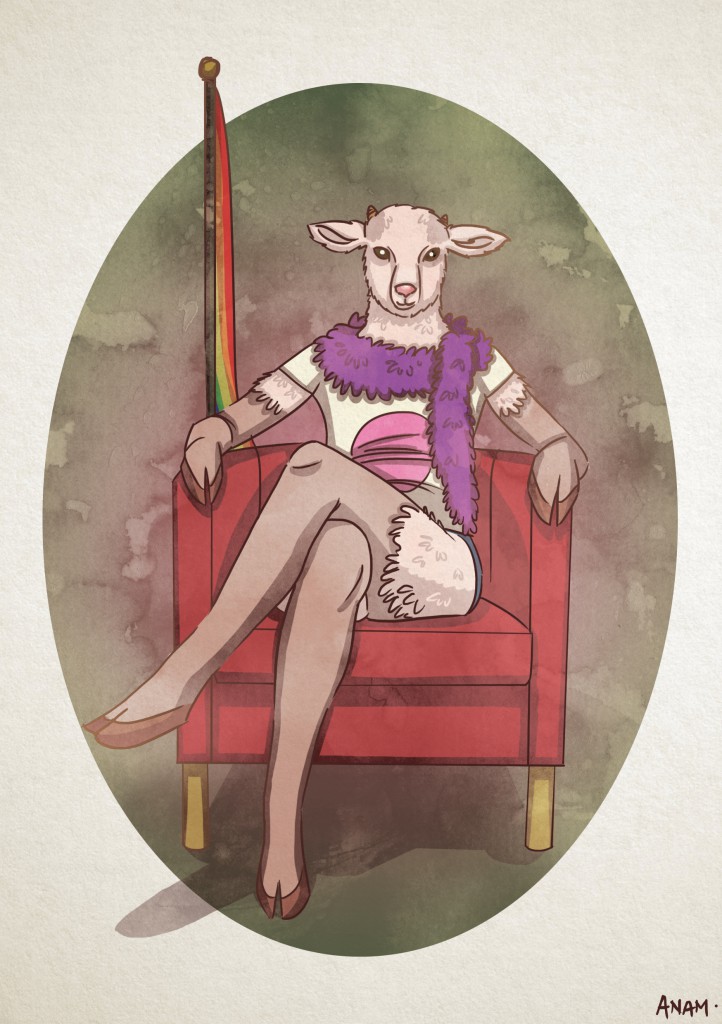 After studying the works of Fran Krause, Alexandra Ball and Andreas Besser, I tried to fuse their styles together and incorporate that into my existing style. What I tried to achieve over the process of my work was a style with clean line work (varying in thickness and swiftness), a misty and grungy look in terms of color and texture, as well as a painterly finish in all my illustrations.

These artists all have one thing in common – they all did illustrations for children’s books. And I guess that is what my style is more appropriate for. Coming back to the point that the sheep is associated with child-like characteristics, it is obvious as to how I would like to execute my final images. However, due to the mature content of my POV ideas, it creates humor and irony as the style clashes with the message. And I guess that is the very factor that makes my artwork for this project more interesting. 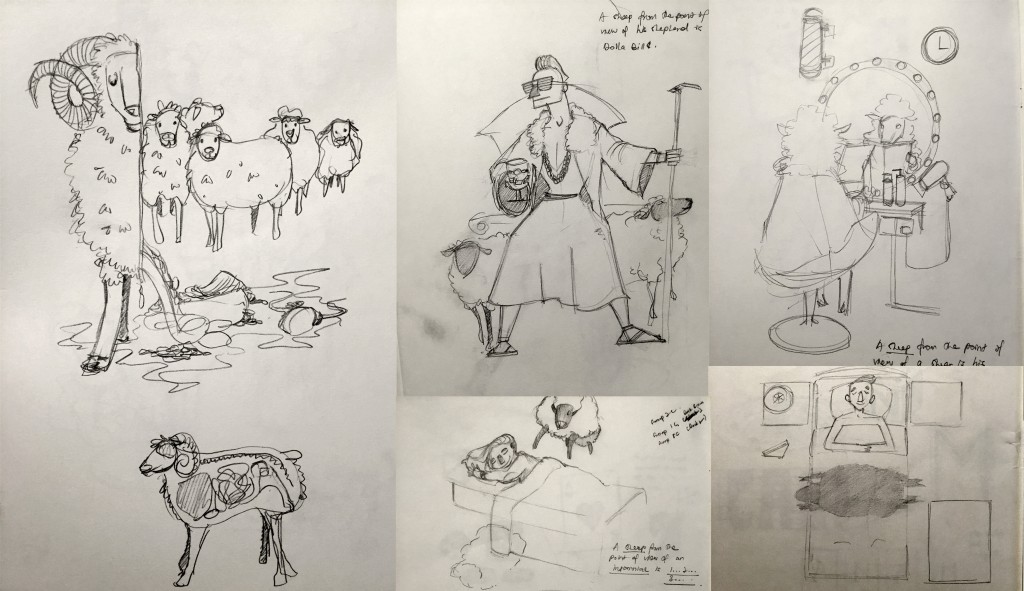 I started out with basic sketches in my sketchbook. With the POVs finalized, I had a clear idea of what objects I would like to feature in each and every image. There were drafts that were scrapped and there were some which were scanned, traced over in Photoshop, and further developed.

Below are all breakdowns of how the final look of the image is achieved. For almost all of the POVs, I started out with a basic sketch eventually turned into a cleaner and more refined line work, before adding the basic colors in and eventually visually enhanced with light, shadow, texture, and gradient.

“The sheep from the POV of a shepherd iz dolla bill$!”

This is a play with words where pop culture has influenced the terminologies that replaced money and wealth. Since the shepherd is often referred from biblical times, I have decided to modernize it and give him gold shutter shades, gold chains, bling-blings, a throne, a bejeweled chalice and a golden cane. The sheep surrounds him like peasants. And in this arrangement, it created a triangular composition where the shepherd is at the top of the hierarchy. Yellow tones were used on the shepherd to accentuate his wealth and happiness over the sheep.

“The sheep from the POV of a shear is his 3 o’clock client.”

As you know, the shear is used to shave the wool off the sheep by farmers. If I were to personify the shear, he would definitely be the barber/hairdresser to the sheep. So in this illustration, I have made the sheep a regular customer of the shear. More vibrant and louder colors were used in this image to display a sense of fab and to create the ambiance of a salon. I have emulated the same type of framing as the one used by Andreas Besser.

“A sheep from the POV of his wife is a baaad boy!”

This is a pun used to humanize the relationsheep of the sheep and his wife where they get a little bit playful in their private space. There is also pop culture references in this illustration such as the BDSM-ensemble the characters have put on as well as the large behind (excuse my language) of the wife. Purple stands out the most in the image, with mists of pink, to create a more sensual and sultry scene. Dramatic lighting is used to push the shadow casting on and framing the sheep in a triangular composition. 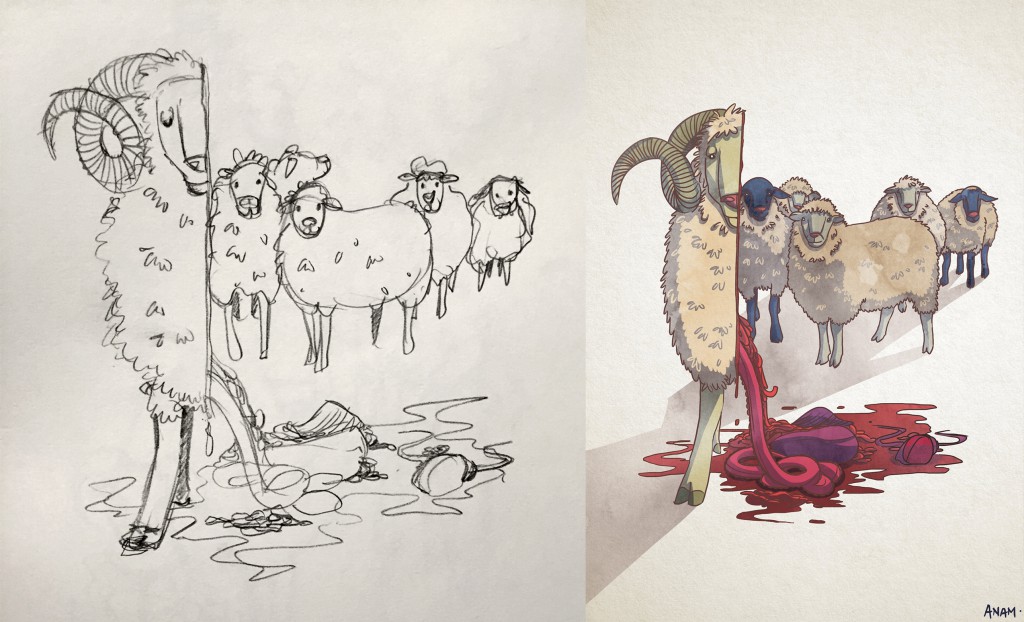 “The sheep from the POV of Damien Hirst is half a sheep.”

Damien Hirst is a famous English artist known for dissecting animals and cutting them into half for his displays. Although his artwork are usually seen from the cross section of the animal, I have decided to put the sheep in a different view where you see its organs slipping out of its body. All that happening while his sick sheep-friends watch. I wanted to achieve a gruesome and a slightly deranged humor in this illustration. The shadows of the sheep are placed in a position that creates the illusion of elevation.

“The sheep from the POV of a goat is her gay best friend.”*

Since the sheep is blessed with the gift of its fleece, I thought that it would be funny if it is compared to the fur of a goat, where it is seemingly non-existent next to the sheep. In a way, it makes the sheep much more fabulous in comparison. And that is why I have associated it with “the gay best friend”. There are also hidden innuendos in the illustration such as the flag and the shirt. The sheep is encapsulated in an egg-frame to show sureness and confidence.

*Disclaimer – No intent in discriminating against any social groups.

I have decided to go with the Sheep as my subject of interest for this assignment mainly because I wanted an embodiment of humor, innocence and indifference. After much research, I realized that people who tend to associate the sheep as their spirit animal are child-like, gentle, vulnerable, self-accepting and can be very conforming to social norms. With these attributes taken into consideration, I have revolved them in my point-of-views (POVs).

Here are the POVs that I have brainstormed on:

I have listed 18 ideas and the ones in bold are the six that I have worked on for my final images. I have chosen these six POVs because they bring out the different aspects and qualities of the sheep by greatly personifying them. And this is enhanced even more from how I wanted to embody the sheep as mentioned earlier.

Notable artists that I have drawn inspiration from for this project:

Fran Krause, a professor at California Institute of Arts, began cartooning irrational fears of his own, then started to illustrate submissions of fears he received from the general public and posting them on Tumblr. Early in September Krause culminated this long running Tumblr project in a book entitled “Deep Dark Fears.” The book is centered on the irrational obsessions and fears that people battle every day as shown in his illustration above.

His style is rather distinct. He incorporates both simplicity and a dark-creepy grotesque style to further accentuate his rather sketchy illustrations. And his choice of colors are mostly cool and analogous, having a consistent palette throughout his panels of illustrations. His illustrations have a painterly finish to them, which makes them more amusing to see.

Alexandra Ball is a professional children’s book illustration artist based in Guildford. She loves line drawings, spending the early stages of a project working on fluid, hand-sketched compositions. These are scanned into the computer for coloring, and textures are added to give the overall feel of a collage. Looking at her illustrations, you can tell Alexandra’s style is influenced by nature and the four seasons.

What I love most about her illustrations is that they are made up of very simple yet distinct shapes. And they are then further worked on with added details and vibrant colors. This clever use of shapes and colors help give her illustrations more developed and compelling compositions.

Andreas Besser, a professional Illustrator based in Berlin, Germany. He specializes in children book, character design, and black & white illustrations.

I admire how he is able to bring so much dynamic into an illustration without much use of a background. They feel isolated, but the story within feels very much complete. And even with works that is presented with a background, he has a unique way of framing the composition with the use of thick brush strokes. His line work is pretty extravagant as they varied in thickness and swiftness.