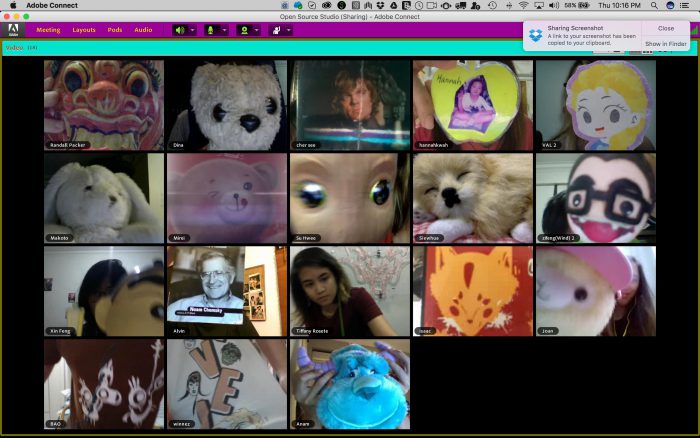 Adobe Connect was a great way to conduct our class in because it was a whole new experience for all of us. With the exception of some technical difficulties in the initial part of setting up the online portal and minor connection problems along the way, I felt that it was an effective way to get everyone to participate in the lesson.

We took turns to speak and each of us were given time to share our opinions about The Collective Body project that we worked on over the week leading up to the class. I felt that it was a step forward from the static photographs that were posted on Flickr, especially since we are able to see each other live in a cohesive space, interacting with one another. The participation was unlike the ones we have during class in the physical world because with Adobe Connect, we were all in the comfort of our own homes/location in front of our computer screens.

Perhaps the third space could possibly be the future of the modern classroom setting. All of us were able to stay engaged and conducive despite being in remote spaces.

Here’s a screenshot of all of us in our “masks”: 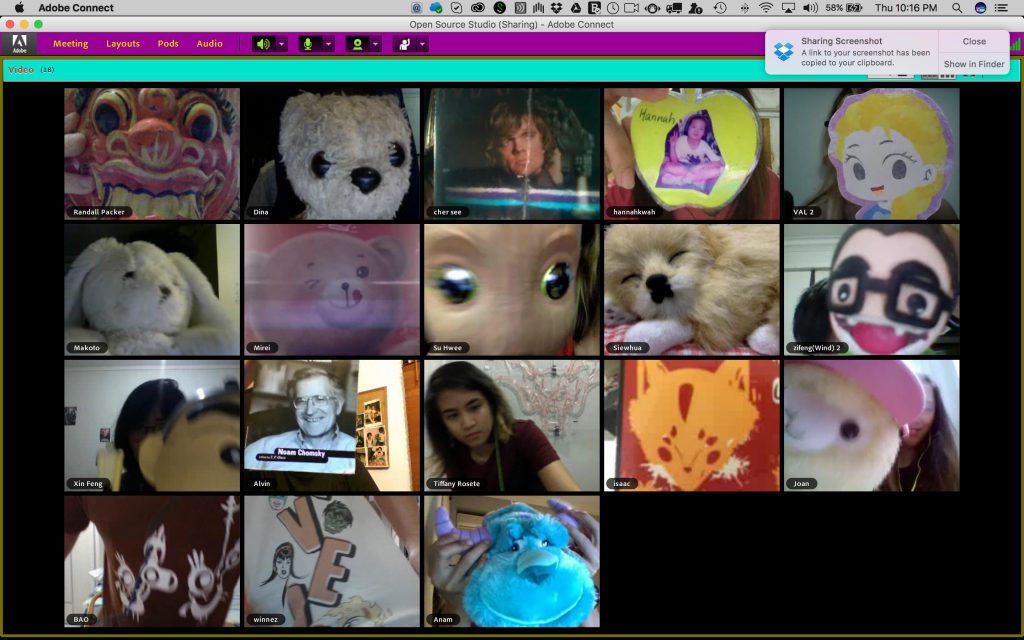 We can’t possibly achieve this in our usual physical space, now can we? (;

“Hole–In–Space suddenly severed the distance between both cities and created an outrageous pedestrian intersection. There was the evening of discovery, followed by the evening of intentional word-of-mouth rendezvous, followed by a mass migration of families and trans–continental loved ones, some of which had not seen each other for over twenty years.”

– “The Social Machine: Designs for Living Online” by Judith Donath

Hole-in-Space has allowed the public to be comfortable to interact with strangers. The project by Kit Galloway and Sherrie Rabinowitz was a remarkable milestone in showing how telecommunication could bridge the physical distance between people from different places, and bring them together to interact in one cohesive space, live. The public communication sculpture, that went on for a total of three nights, consisted of two huge screens , a two-way satellite hookup, and two cameras that were set up in two different cities in the United States – one in Los Angeles, and the other in New York.

Without any prior information or any artist’s statement for the installation, the video that went live on the first night caught pedestrians and passer-by’s by surprise. The people were able to see and speak to each other with no media interruptions or any self-viewing cameras that might have made them overly self-conscience and impede them from genuine communication.

Viewers from the first night were so enthralled from the encounter that word-of-mouth and local news reports soon brought long-distant friends and families, whom in some cases have not seen one another in years, together in one space. For some, it led to several planned meetings on the second and third nights, bringing joy to many who were finally able to see their loved ones. While for others, the virtual space became a medium to integrate other forms of interaction fearlessly and spontaneously.

“A virtual space creates social situations without traditional rules of etiquette. The absence of the threat of physical harm makes people braver. Virtual space diminishes our fears of interaction.”

The reading highlighted one very important point Physical interactions often complies to the rules of social norms. The consideration of whether a certain behavior is socially acceptable or not often comes with everyday physical interactions. Some people might even be a little shy and awkward to express themselves when it comes to such. And these social bounds that we have contrived ourselves into hinders us from free expression. However, interactions in the virtual space breaks that mold. People tend to be far more spontaneous and candid with their social interactions in the third space.

Take Hole-in-Space for example; passer-by’s in the streets would not usually stop to communicate with each other. It took a huge screen, with people from a different geographical location, to allow them to be comfortable with saying “hello” and to express themselves. Virtual space is allowing people to be comfortable to interact with strangers.