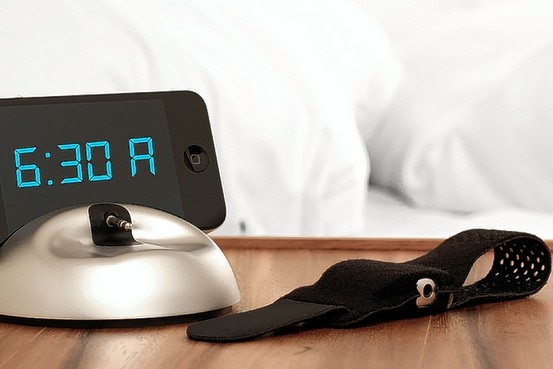 LARK is a silent alarm clock that wakes the user up in a gentle manner without disrupting the sleep of others around them. Made to be worn on the wrist, the material is light and breathable to provide comfort for the user while they are asleep. The LARK alarm clock works by sending silent vibrations to the user’s wrist according to the time they set it to be woken up on. The device only works with iOS so it could only be paired with the iPhone, the iPad, or the iPod Touch. LARK comes with a dual dock that allows the user to charge both their phone and their wristband. The device also doubles ups as a sleep tracker to learn the user’s sleeping patterns to ensure that they optimize their rest time and maintain a consistent and healthy sleep cycle.

I feel that the biggest consideration taken by the creators while developing this device is the silent feature in the alarm clock. Unlike conventional alarm clocks where the rings or sounds that are released are made loud to wake the user up, LARK makes sure that only the user is woken up without alarming others that may share the same sleeping space as the user. LARK understands how users differ in sleep cycles and how each and everyone of us gets up at different times. Having the dual function where the wristband tracks the user’s sleep cycle also gives LARK an edge among its competitors.