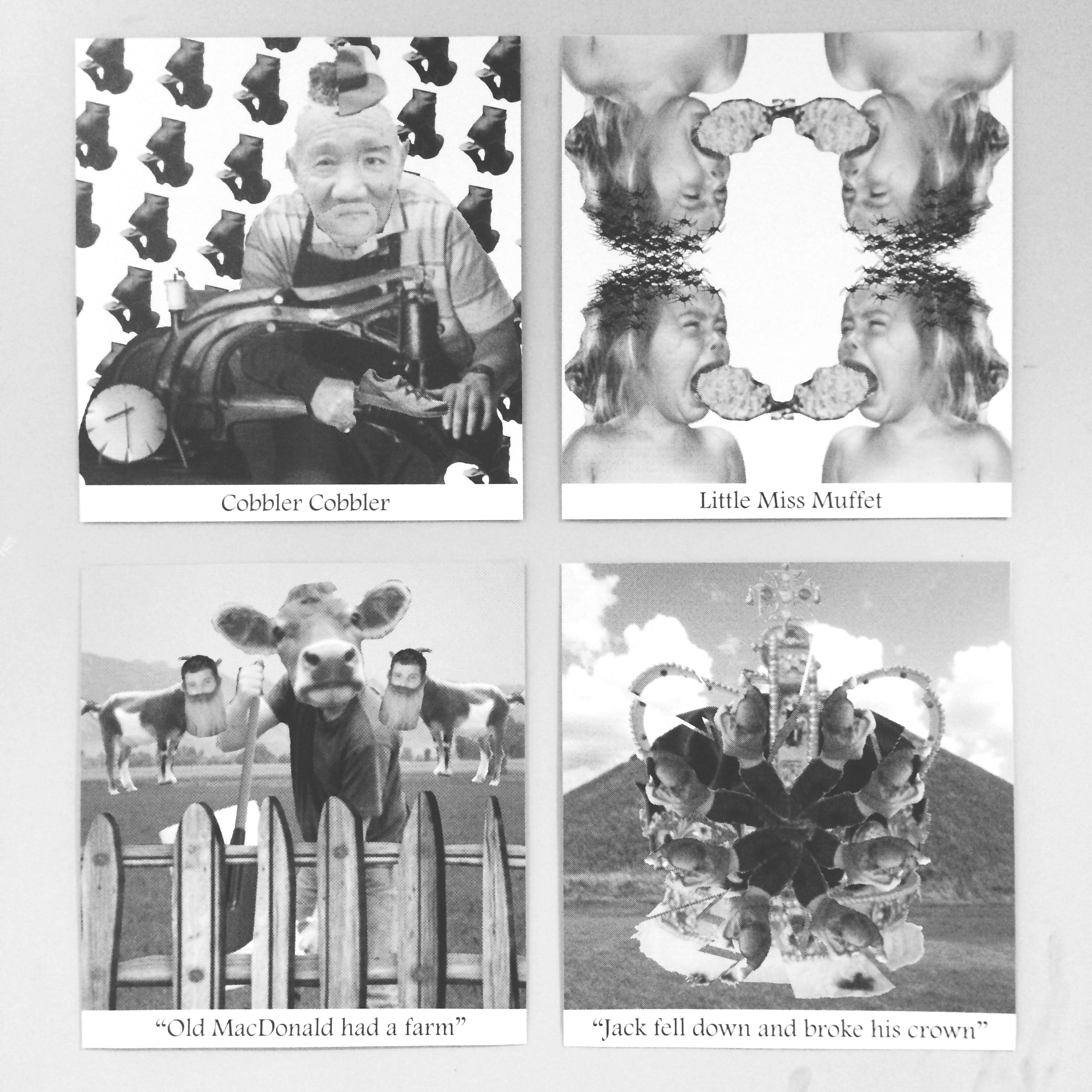 Get it done by

Is much too late.

Get it done by

Inspired by collages done by Hannah Hoch, I decided to piece different body parts of men from different pictures and manipulated to form a totally new picture of a cobbler mending a shoe. The concept for this piece is to create a new image using the collage technique. Sat on a tuffet

Eating her curds and whey.

Along came a spider

Who sat down beside her

And frightened Miss Muffet away

Inspired by the opening scene of a television series ‘Orphan Black‘, where the play of mirror image (balance and symmetry) is used. If the image is divided in half, there is a form of symmetry. The concept is to create a creepy approach to this poem by using the 3 symbols mentioned in the poem: Little Miss Muffet, spiders, curds & whey. Went up the hill

To fetch a pail of water.

And broke his crown

And Jill came tumbling after.

The concept of this piece is to experiment the position of pattern and symmetry while keeping to the line “Jack fell down and broke his crown”. Jack is seen holding on to the broken pieces of the crown from all sides. Many Jacks are placed in a circle creates a form of pattern and shape. Old Macdonald had a farm

And on that farm he had a cow,

With a moo moo here,

And a moo moo there.

There a moo moo,

Old Macdonald had a farm,

Inspired also by Hannah Hoch, I replaced the animal’s head with a man’s head, and the man’s head with a cow’s head. I created a concept of a parallel world, where Old Macdonald is an animal who had a farm, where the animals were humans. The two animals at the left and right side of the image are symmetric to create a balance. 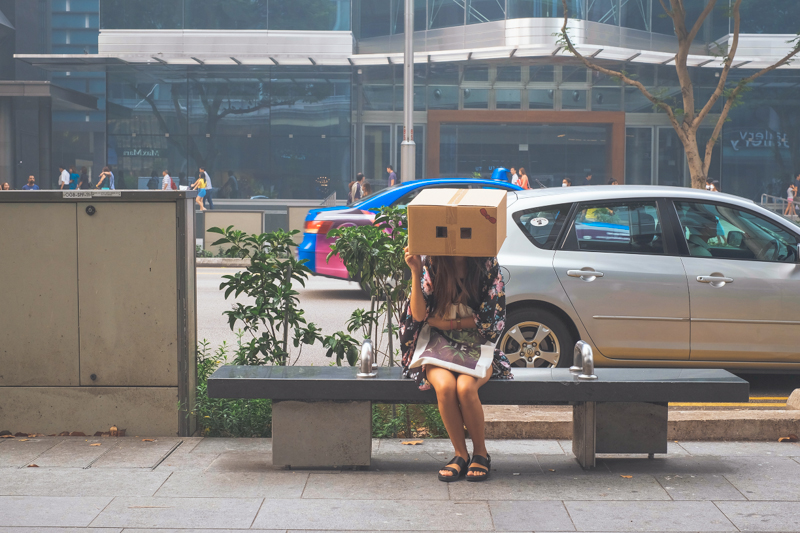 Inspired by performance artists such as Yang Eun Joo, what I wanted to do was to experience how it was like living with my head covered with a box and to also capture people’s reaction when they see me.

I went around town with my friend, who helped me to capture my journey, going about doing normal things like eating, walking along the streets, browsing books in the bookstore and taking the public transport. The images captured represents some reactions of the public like for example staring, pointing and laughing.

The 90 images are divided into 4 sections: eating, walking, reading and travelling. The images are taken in a sequence for each section and when put together they form a stop motion video.

Though this may seem like an easy task to do, what I realised was that it wasn’t that easy to go out in public wearing a box and it really took a lot of courage for me to do that. Although I hesitated at first, after going through this experience I realised that I really enjoyed it. 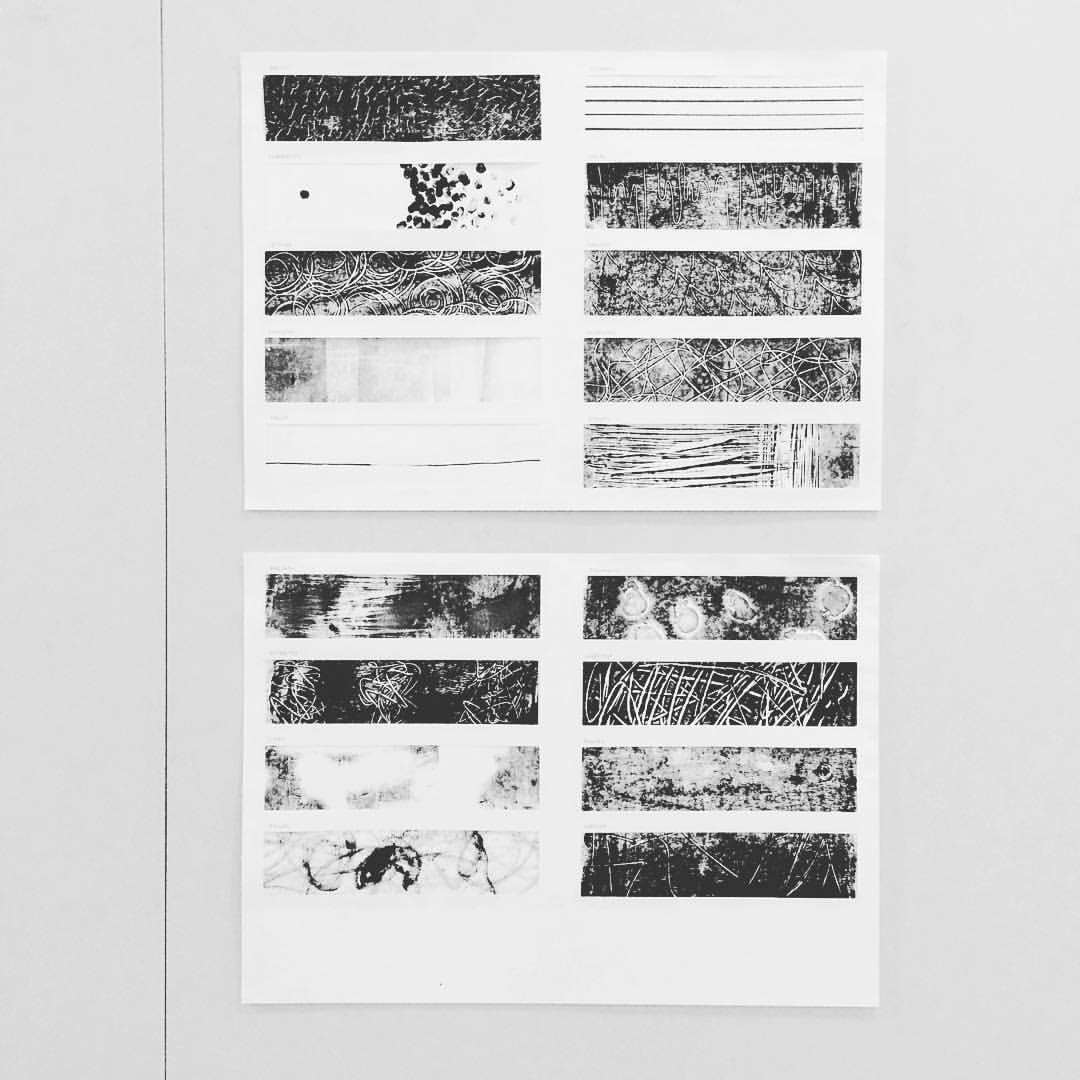 How do you express feelings using lines and dots? Placing many short curvy lines together make me feel like many things are happening at the same time. It reminds me of how when we feel anxious, there are many thoughts running across our mind at the same time.

Seeing how the black paint starts to fade from left to right, it is similar to how we are always full of energy at the start of the day but by the end of the day, we’ll feel drained and exhausted.

This gives me the feeling of someone locked in a cell at a mental hospital where there is nothing else to make to do but to draw on the wall. The lines gives a feeling of both aggressive but at the same time it is repetitive, and to me this feels like something a person would draw if he/she is feeling disturbed. Sol Lewitt, born in Connecticut, Lived and studied in New Britain. His works included minimalism and conceptual art, which explores repetition and variations from a basic form or line. It is interesting to me that how even though his works are simple and minimalistic, he is able to use just lines and scribbles to create dynamics on a blank canvas from dark to light (Sol Lewitt, Scribbles). His wall drawing #879, Loppy Doopy, was also an influence on some of my works where I realised that curvy lines depending on how curved they are can also create an emotion.