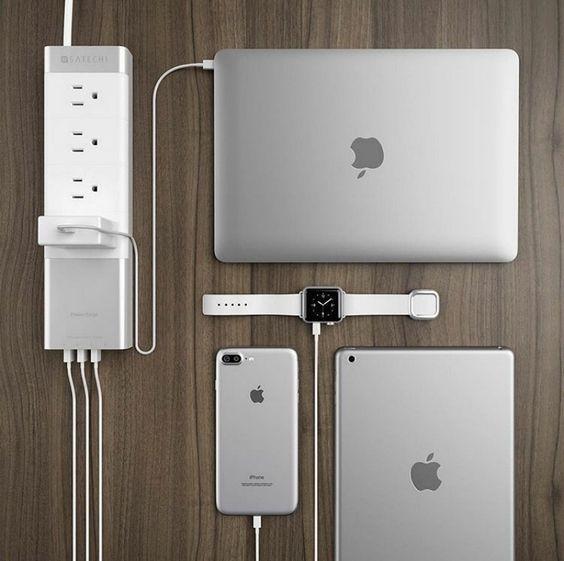 I remember that when I first got my personal mobile phone I was 12. It was the rise of the Nokia phones and all of my friends had them except me. After months of bugging my dad gave in and bought me my first mobile phone, but he told me that the reason why he got it for me was for him to keep in contact with me after school ends. Both my parents were working so usually I would go back home by myself and he wanted to make sure that I was safe wherever I was.

As I grew up, the experience of having a phone changed. At first it was to contact my parents, but after it became a social norm for me where I would use it to chat with my friends and download games to play whenever I was travelling from a place to another. After many years of using the phone, it got stuck and my phone and I were inseparable.

Now, I use my phone to check instagram or my social media in the morning, and a thousand times after throughout the day. I do everything from playing games, to watching videos on my phone but the one thing that I don’t do as much on my phone is contacting people though phone calls or messages. Even though I do check my messages, I don’t check and reply often, unless it was for something important. Eventually, having and using a phone is more of a habit or an addiction rather than needing to contact a person.

I guess that is true for most people. As I sit in the train and observe the people around me, only 1 out of 5 people are texting or talking on the phone. The rest of them use their phone to watch movies, scroll on social media, read the news and play games. Wherever I go, be it in public transports, restaurants or in school, my observations were similar. I realised that nowadays people use their phones for entertainment more than using it to contact people, which is ironic because mobile phones were first invented as a means to contact people on the go.

To be honest, it was an extremely hard day for me. The day felt so long and at first I felt that there was just so little to do. Usually in the morning when I wake up I would run through in my mind about the things that I have to do, which was to check my messages and games on my phone and emails on my laptop. But today my mind was chaotic. I had a mental to-do list in my head and as I started to assess them, I realised that I needed to use my phone and laptop for most of them so I had to mentally strike them off the list and when I was done, the list was empty. Strangely, starting on my schoolwork was not part of the list and I realised that I was so distracted with being entertained by the internet that I had pushed back my work.

As the day went by, I started to be more motivated to finish up my school work (which thankfully did not require the internet) and I did many things that I usually do not do on a daily basis like cleaning up my room and reading a book that I had bought months ago (they were still wrapped in plastic). There were times in the day where I did not know what to do so I just sat on my bed and did nothing for a while. There were other times where I had forgotten that I was on an electronics ban and I thought that I had lost my phone so I was looking for it frantically. While I was waiting for my parents to knock off from work and my brothers to come home from school, time passed so slowly and honestly I felt quite lonely.

At night, I got to spend more time with my family after dinner and had a proper, long conversation with them.

Even though at the end of the day I felt that I had the most fulfilling day in the longest time, there were many times I felt empty and I was worried if there was anything important that I needed to know. Coming from an Electrical Engineering background in my previous polytechnic, Timothy Nohe’s presentation was really an eye opening experience for me. Never have I thought that engineering and art could come together hand in hand to create an interactive experience in which audience of all ages could appreciate.

Back in my polytechnic, whenever we work with waves, it was in a serious and dull environment, where we had to identify and observe different types of waves. It was interesting how it was possible to turn something so mundane into art which is enjoyable and participative. The audience do not need to know about waves and the different types of input to play with the waves. It was such a spontaneous activity and that was what attracted me.

It also gave me a new perspective of art. Much like the previous exhibitions that we went in the Art Science Museum, these kinds of interactive art seem so innocent and childlike, and it really proved that it was such a good user experience as it managed to reach to a wide range of audience. The young and old could experience it, and you don’t have to know about the technicalities or knowledge behind it to appreciate the art. This is what I really appreciate and like about Electron Drawing – Visual Music. 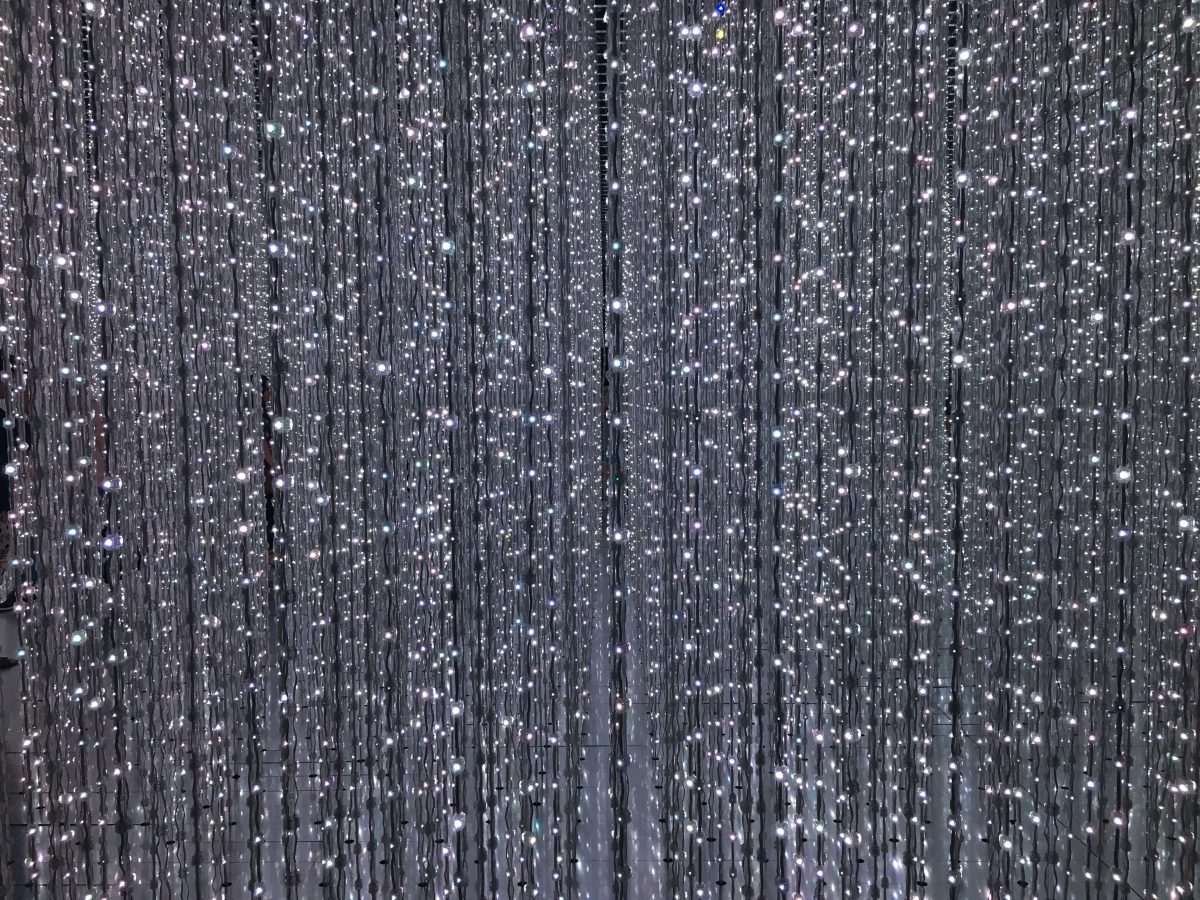 Though I’ve been to this exhibition a few times, every time I step in and experience the installations it feels like I’ve never been there before. This time, the immersive experience that I felt was so much more as compared to the previous times that I’ve been there. I was able to take my time and soak in each installation and I guess this was what made me feel so much during this visit.

The first installation that I experienced was called ‘Crows are Chased and the Chasing Crows are destined to be Chased as well, Transcending Space.’ This immersive installation made use of a 3D space, video and audio and it felt real when it was ongoing. In some parts when I was focusing on a certain spot, my mind and body began playing tricks and it felt that I was floating in this virtual space. 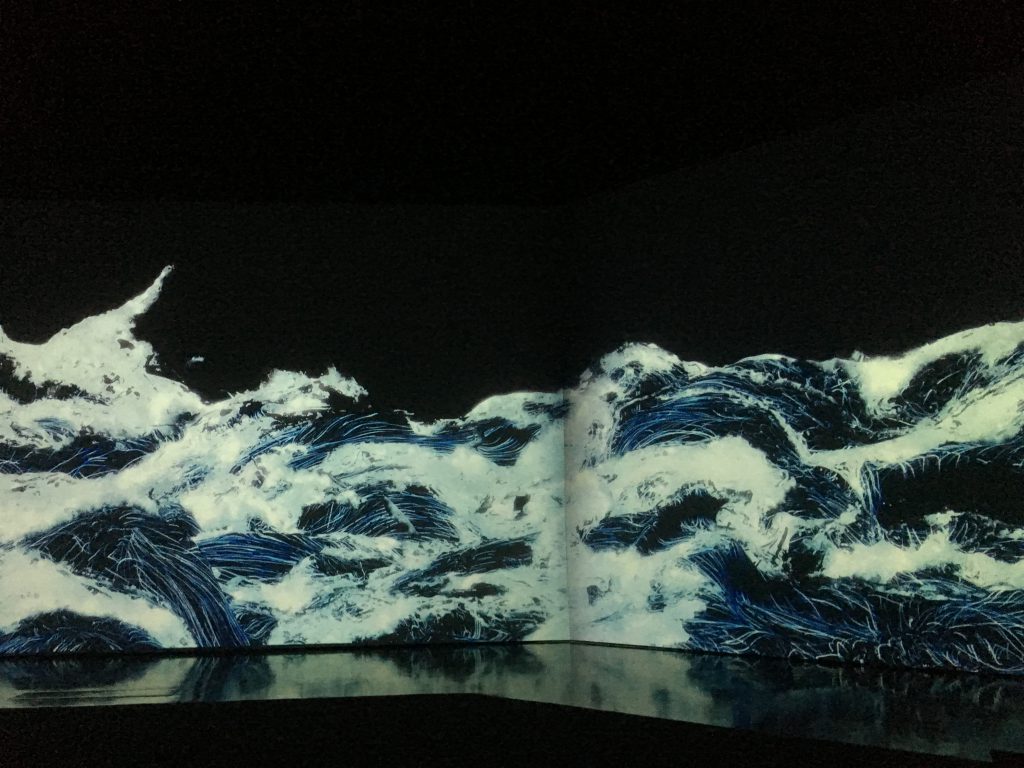 Lastly, Crystal Universe caught my attention and was my favourite amongst all the installations in Future World. This installation uses audio, lights and human interaction to immerse you into a space where you find yourself walking and existing in the center of universe, while the movement and effect of the lights make you feel as though you are travelling through it. This installation is made unique as the audience are able to participate in it, by changing the motion and colours of the lights through their phone. This makes every experience a different one. 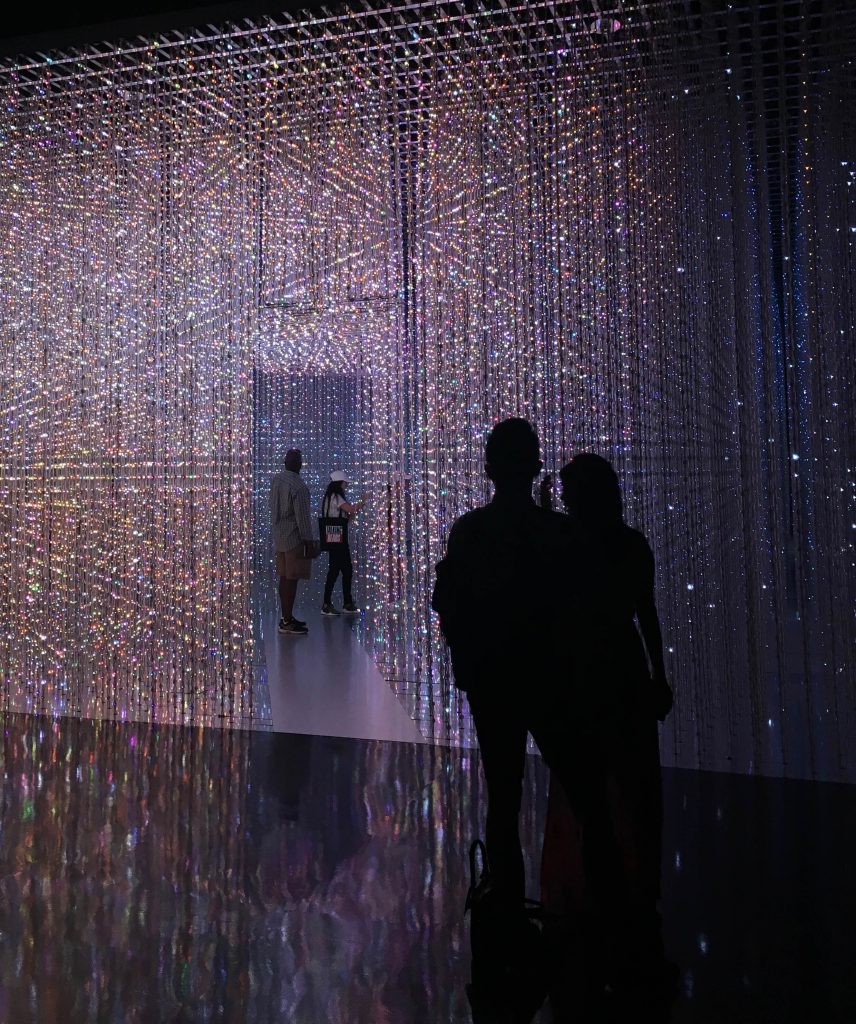 Personally, what I’ve learned in this exhibition is the importance of how space, audio, and visualisation should work together, and can work together if we want to create an experience that is alluring, exciting and immersive. It is also important to find a balance between these three aspects, and when we’ve learned how to do this, there is so much more potential in creating something for people to experience the extraordinary.