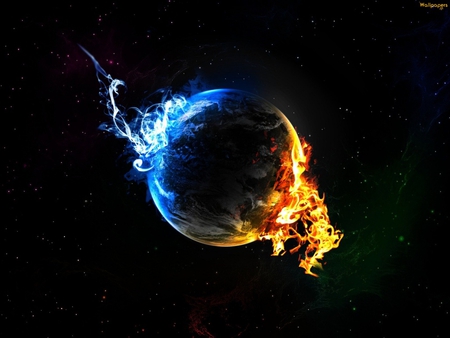 Fire and Ice
by Robert Frost

Some say the world will end in fire,
Some say in ice.
From what I’ve tasted of desire
I hold those who favour fire.
But if it had to perish twice,
I think I know enough of hate
To say that for destruction ice
Is also great
And would suffice.

Fire is powerful, and ice is also powerful enough to cause an effect. The theme of this poem is the argument of whether desire or hate will eventually be the cause of the destruction of the world. Frost is sure that the world is able to end because of desire, but is a little unsure about the possibility of hate being able to end the world. However, he ends the poem saying that hate is also powerful enough to cause an effect and doesn’t give a definite answer at the end of the poem.

What if Frost is suggesting that even though both elements, separately, can cause something to stir, but when both elements coexist, the world will surely be able to end in great destruction (given that the title is Fire and Ice, and not Fire or Ice)? What I aimed to do in this photo sequence was to meditate on the question above the images. ‘The world’ in this series is represented by a physical body, a living soul. ‘Desire’ is represented by red paint, and ‘hate’ is represented by black paint. What I personally felt was that desire alone, and hate alone is not able to destroy someone as much as when both elements come together. I explored the sequence of how someone’s mind or soul can be destroyed if both elements of desire and hate come together. The purpose of this series is to create a certain awareness of how when one is consumed by desire and hate, it can ultimately be the cause of his physical and mental destruction.