For this week, we decided to start with playing with mirrors and get a hands on feel of how it interacts with the spaces around us. For this prototype, we wanted to make a perception altering that attaches to hats. This attachment augments the users to see only their sides and not their front. This inspiration is from a hammerhead shark. 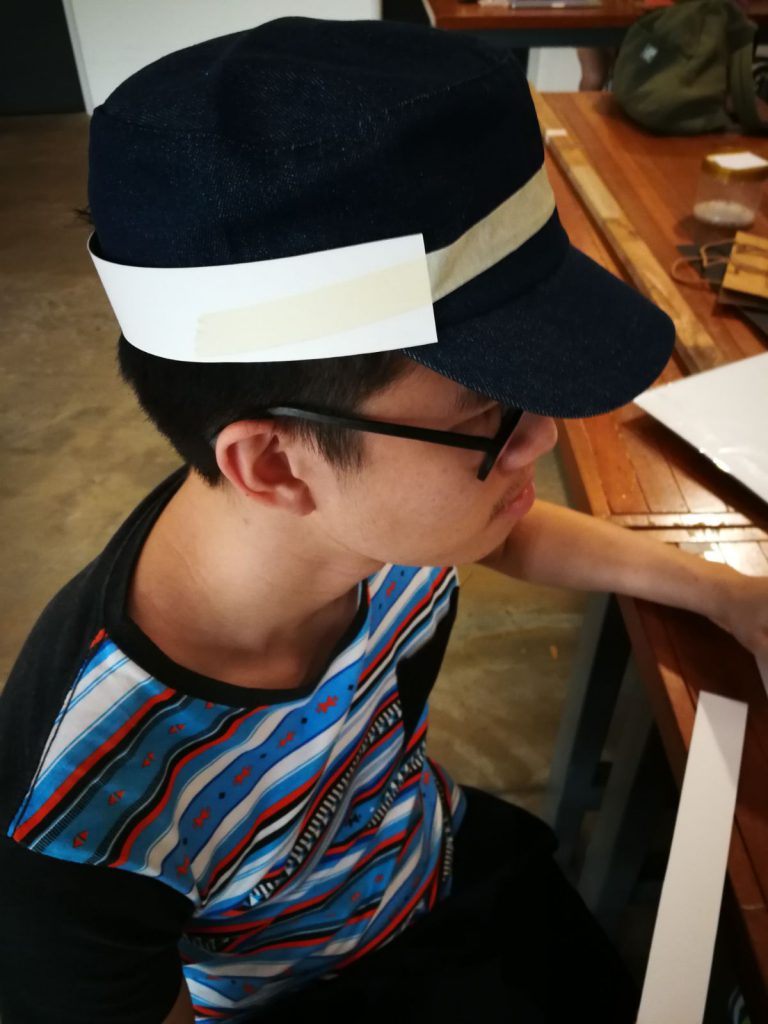 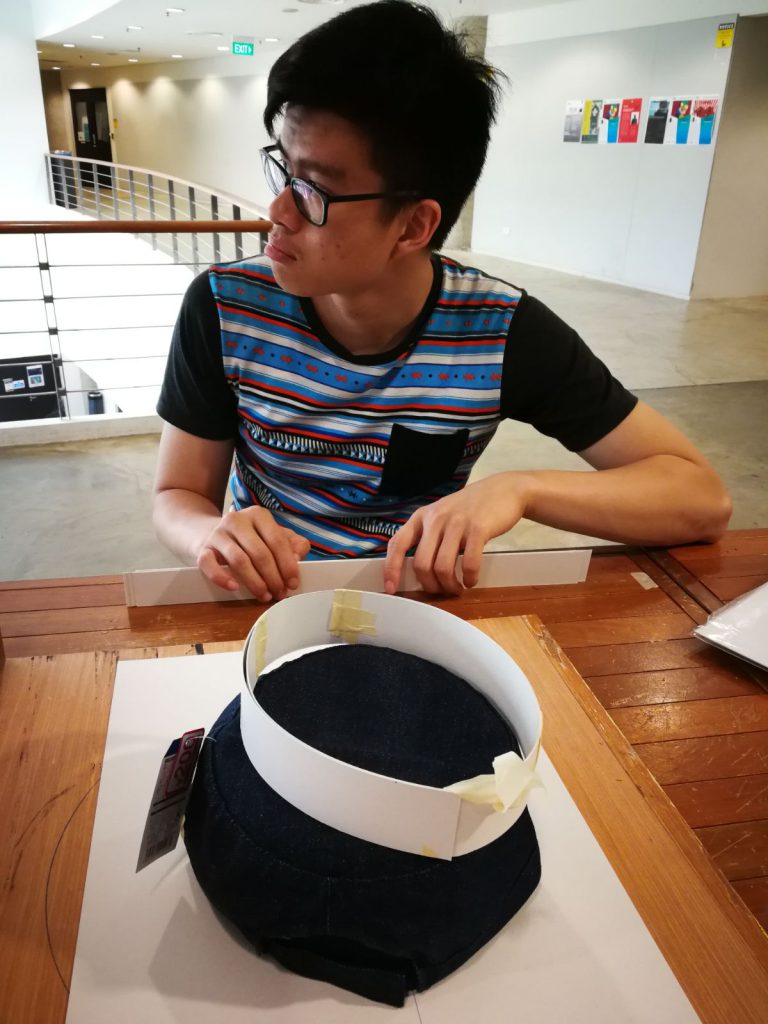 Making the attachment using white cardboards from Daiso. This headband will be attached to a bridging unit that will then be connected to the mirrors unit. 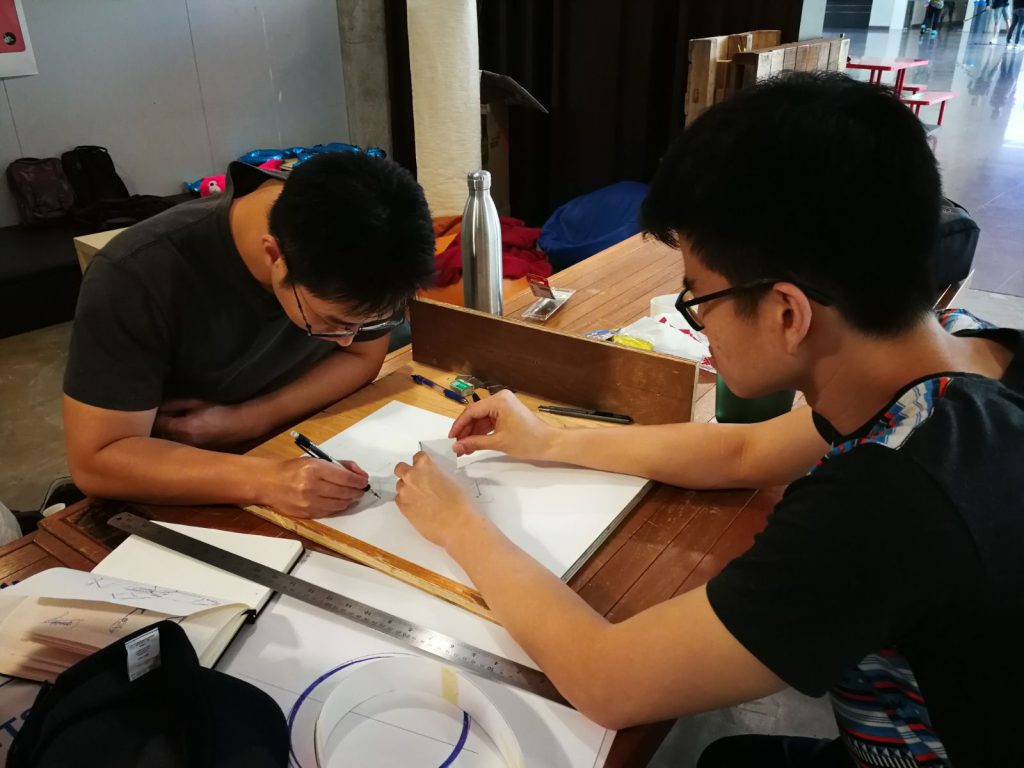 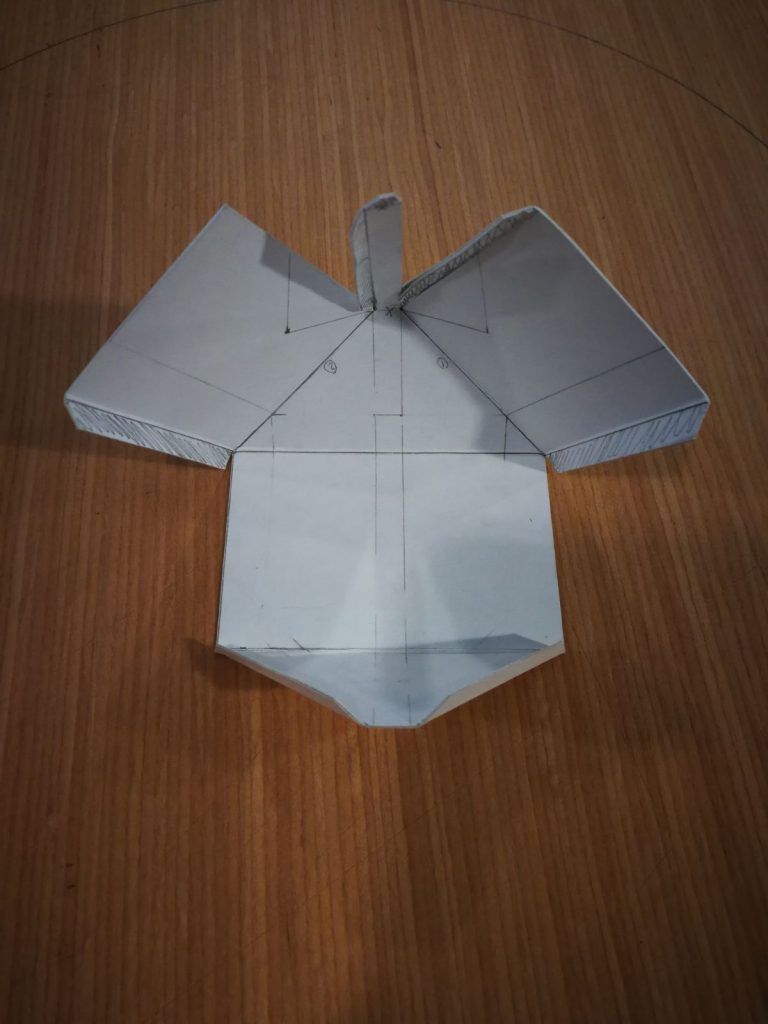 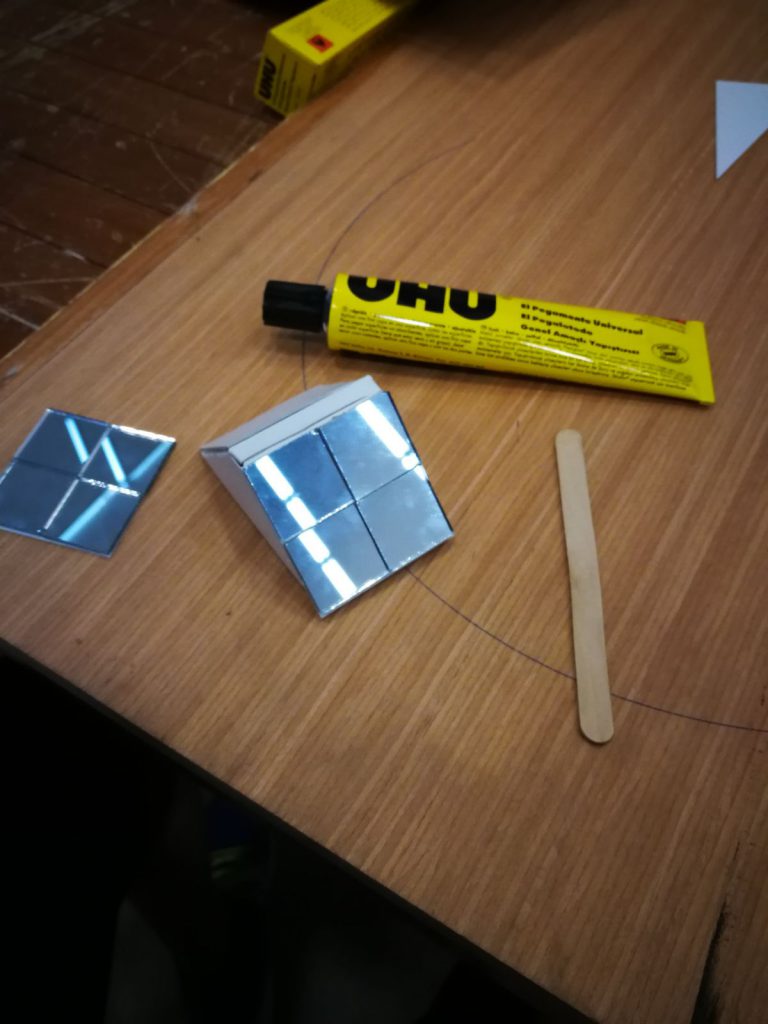 We decided to make the entire attachment with white cardboard so that we don’t have to use more expensive materials for this prototype. The mirrors we use are 1 inch mirrors which are leftover from previous semester’s projects. This section will be glued to the section below to create the mirror unit. 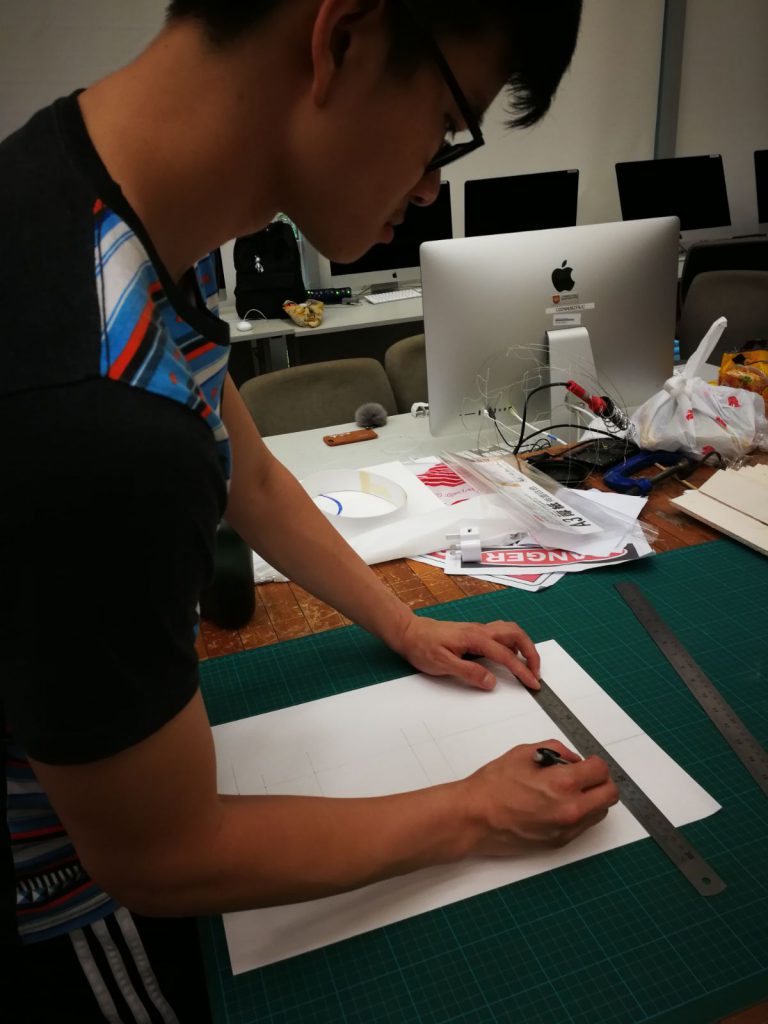 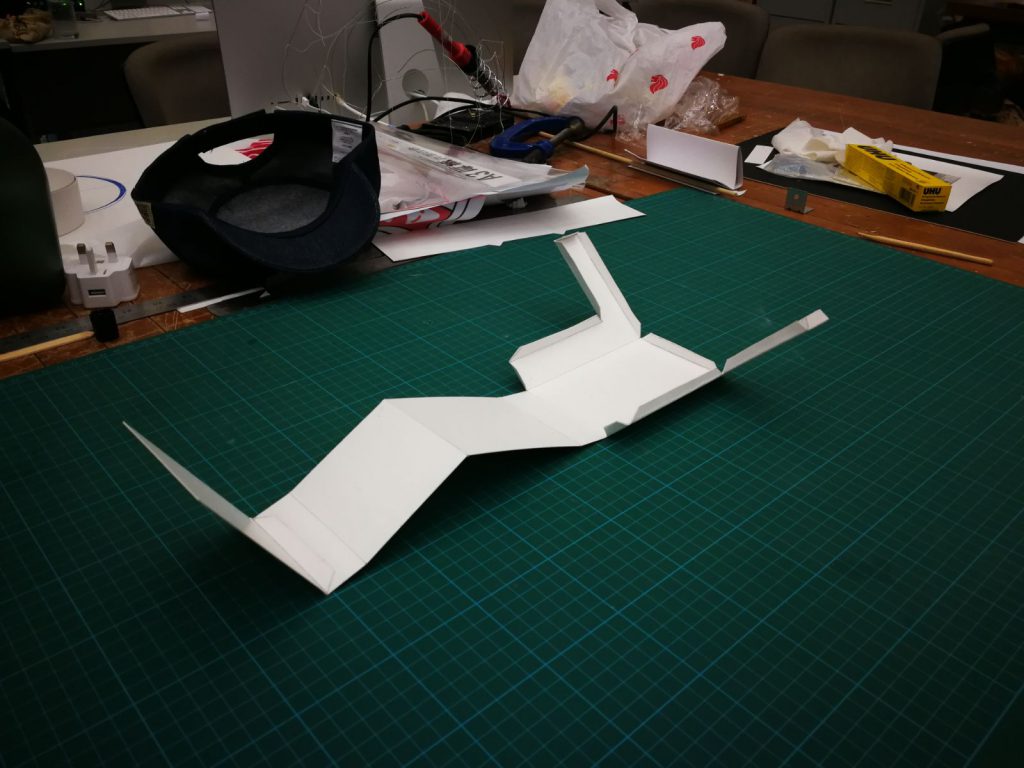 When this section is folded up and glued, it will be glued to the piece above. This is a bridge for the mirrors and the headband for attaching to the hat. 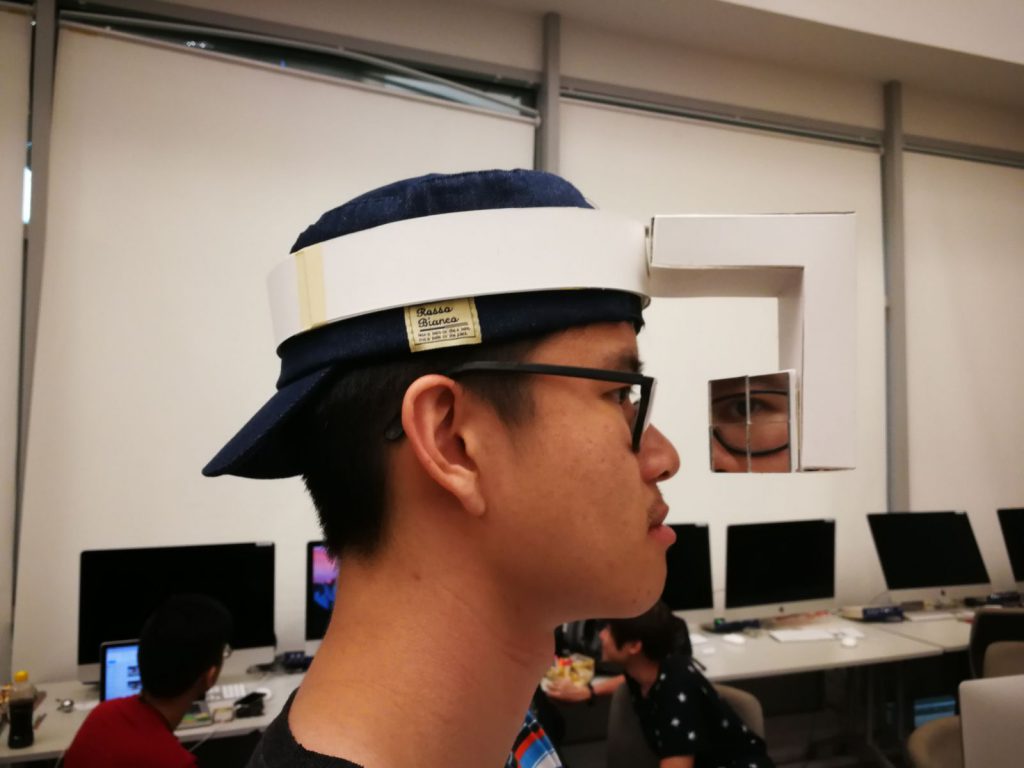 This is how it looks like when all 3 parts, the headband, the bridge, and the mirror unit are combined.

From the image below, we can see that the  left mirror is reflecting the environment from the left of the unit and right mirror reflecting right environment. However, this is the camera’s view. As the mirror unit is near our eyes, when we wear this, a strange phenomenon happened. Whatever image we saw from our left eye (from left mirror) is processed as seen using our right eye and vice versa. This means that, although we see the image through our left eye, our brain process it as ‘being on your right’. We let a few more people try this augmentation and found out that they too were surprised by how disorientating it is to walk around. Most of them just stand still and move their heads around instead of walking. 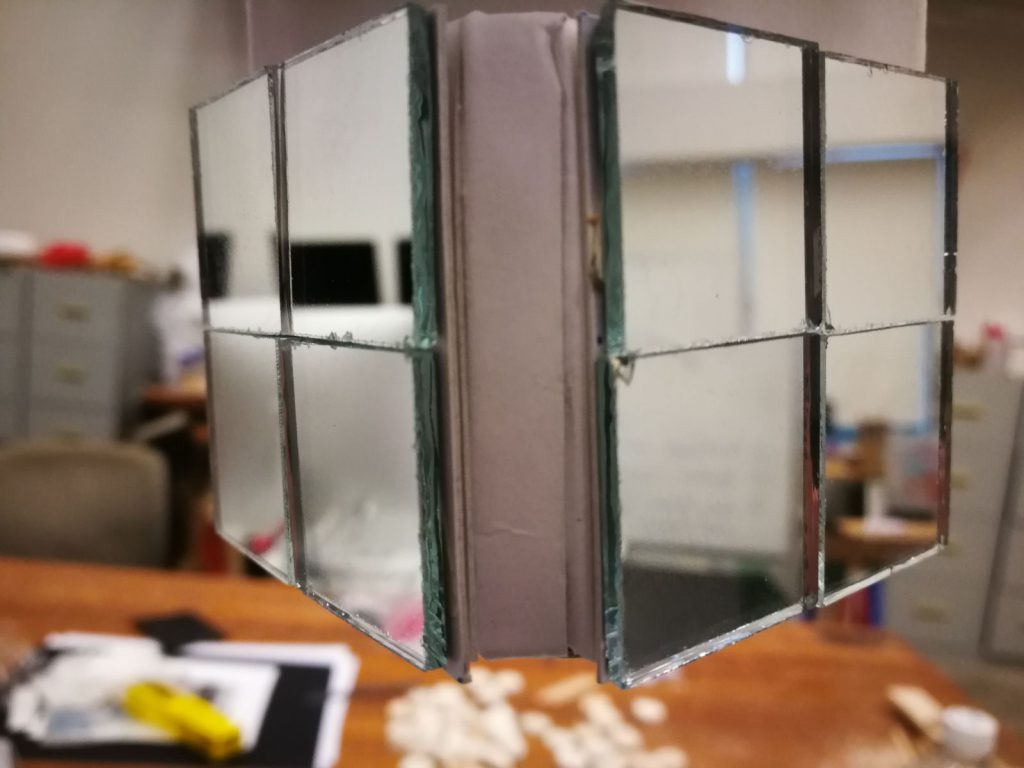 After the above test, we decided to play with more mirrors to think of more ideas by playing with different set ups. 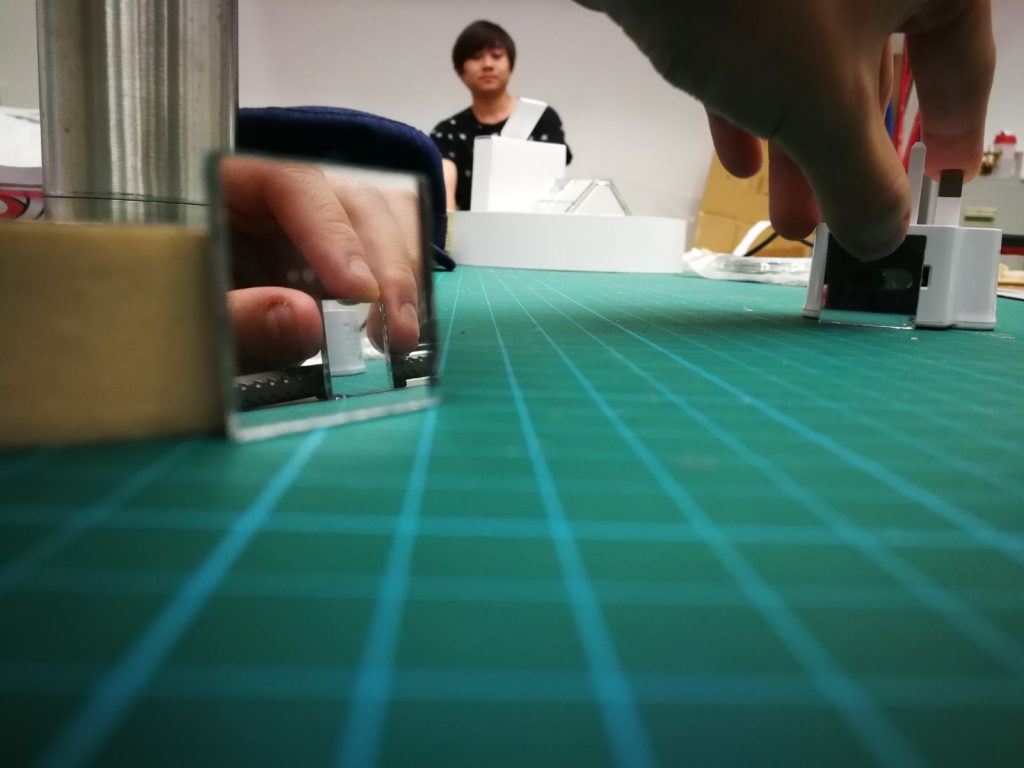 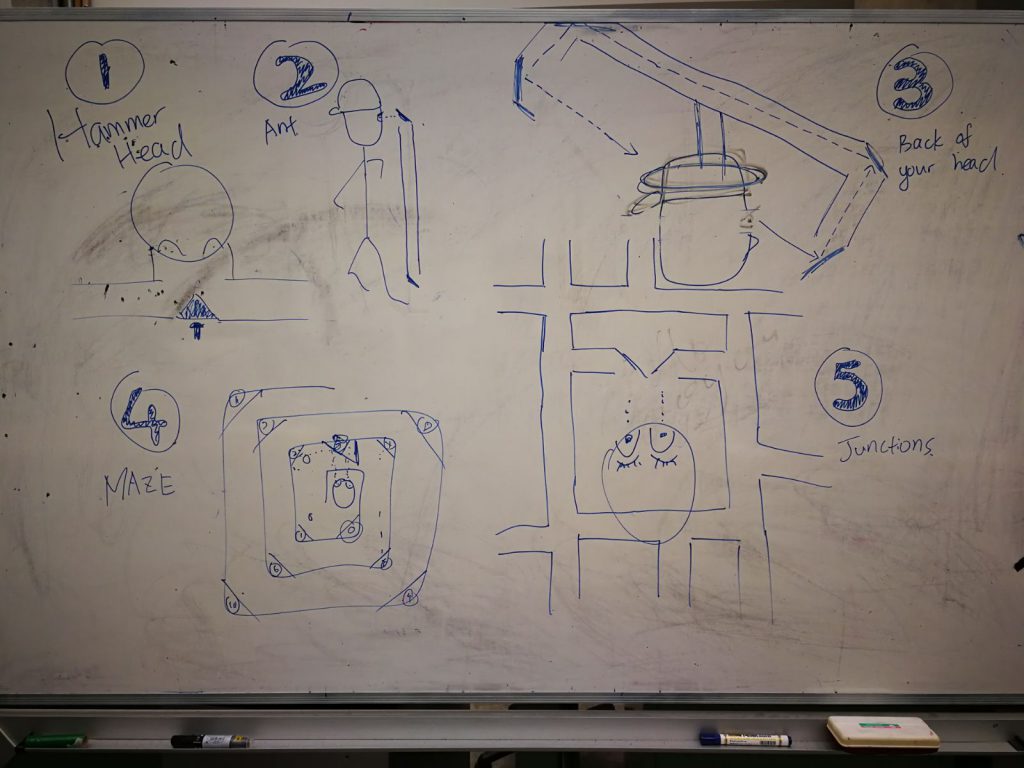 These are some of the ideas we could think of. The following are some ideas which corresponds to the numbers on the picture:

Idea 1:  We could add a tube on each side of  the current attachment to limit the sight of the user. We hope that this would create a greater disorientation. (fingers crossed)

Idea 2: A set up to make us feel that we are moving like an ant.

Idea 3: A set up that allows us to look at the back of our head when moving forward (like a third person shooter).

Idea 4: A wearable maze platform that has turning mirrors. Each mirror can be rotated and the user has to navigate their way out of the maze to see the light.

Idea 5: To open junctions of mirrors so that the user can see different sides of his environment.

After brainstorming, we decided to go with idea 2/3 for another round of prototyping. Which we will address in our next update.

We speculating to try idea 4 for our final project as we want to explore more on the interactions between the mirrors and our eyes. 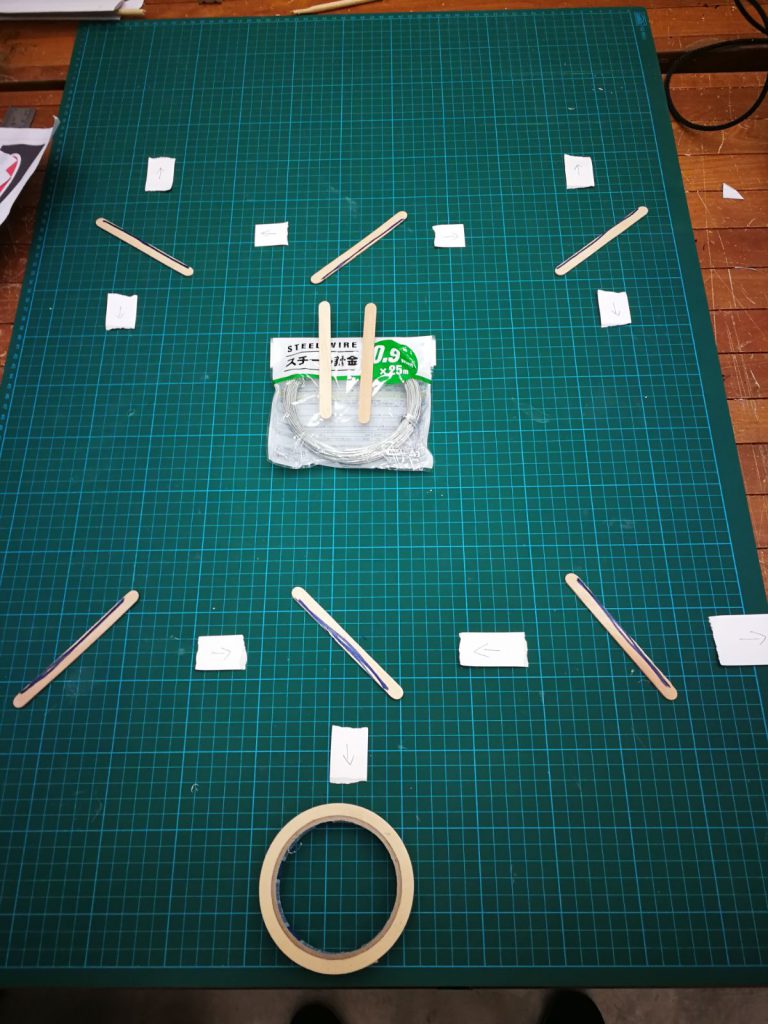 Concept of idea 4: to navigate your way out of the the ‘mental’ maze.

The head of the user is represented with the bag of metal wire with two sticks as the direction of the eyes. There are 6 mirrors which can turn 90 degrees to switch angles.  The tape is the outlet of the maze (the goal). There will be 6 buttons which will correspond to each of the mirrors.

That’s all we have for this week!