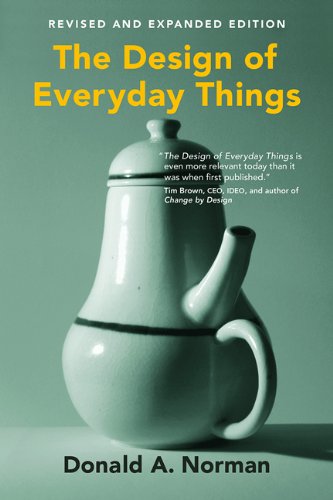 The Psychopathology of Everyday Things

The reading was interesting where Donald touch on the simple things and elaborate on the process of how we interact with it through discoverability and understanding. Taking one example of the ADM glass door that located beside the office on level one, it is one of the Norman doors. I was nodding internally while reading the first few paragraph about why a simple door can be so complicated. Although this is my third year in ADM, at times I still get confuse about the direction of opening that glass door. I came up a way to differentiate the direction through the magnetic system on top, that was the culprit which only allow the door to open from one direction. Whenever I am confused I look up to see which direction I am standing and act accordingly.

There is a part where Donald talks about the engineers think that they understand people however, they neglected the part where humans are complex. Similarly, I feel its comparable when designer/artist created an art piece that display in the museum or a public art. Most of the people don’t really understand it especially for abstract art unless they read the rationale behind it. In later part of the readings mentioned about the signifiers, probably incorporate signifiers into the art piece would makes people able to relate more and understand more. Nonetheless, one can still say that art is an expression from the artist, probably it solely depends on which perspective we view.

I am also amazed that part where simple details such as visible affordance can makes a big difference to the user. It a very subtle detail that I feel I did not realise until I read this reading. We all did it subconsciously just like the handle of cups, it is so natural to hold it by the handle.

Feedback reminds me of the car seats at the front will start beeping annoyingly when it senses that you are sitting on it without fastening the seatbelt. The annoying beeping sound actually works for me as I was really annoyed by the sound so I rather put on the seat belt instead. Perhaps some frustration in some case are exceptions.

Lastly, I also agree that part where each discipline would have their own constrains and importance. When all the teams work together would produce a greater product as compare to a team that did not work with others. It will greatly save the company lot trouble when each team talks about their problem and of course there is gain and losses. Yet compromise from each other will come to a conclusion that satisfy every team!