Hello! It’s been quite a week. I left the previous class feeling more lost than ever but after some soul searching and more sleep (ok mostly sleep) I’m back with some ideas on how to tackle the deceptively simple but actually really complex theme of style:

SO I chanced upon this article that defines style as a visual aspect to consciousness itself – style is about personal identity, personality, self-awareness, and self-knowledge. On top of being a visual shorthand for who you are, style is also shaped by culture. What we like, dislike, and associate things with is curated by the things that we’re exposed to and interact with. This view assets that style is multidimensional and multilayered, both conscious and unconscious.

This idea that style is a reflection of society and culture is similar to that of zeitgeist (in art history). Translated literally as “time mind” or “time spirit”, zeitgeist regards art as a reflection of the culture of the time in which it is created. A quote from German philosopher Georg Hegel goes:

“no man can surpass his own time, for the spirit of his time is also his own spirit.”

I was really intrigued by this connection between style and zeitgeist because I’ve never really looked at (or thought of) style like this before, although I knew at the back of my mind that, of course, style has to be influenced by the existing conditions as well as  tastes and preferences of people in their time.

This set me thinking about what the zeitgeist of our time could be. Anxiety caused by excessive social media consumption, or existential dread? Hm.

Despite these alluring choices I settled upon the Pantone Colour(s) of the Year(s) as a reflection of the 21st century zeitgeist. I think that the power of colour cannot be overstated – it is simultaneously symbolic, psychological, and subjective… what better way to capture zeitgeist? I also feel like Pantone itself , seemingly very contemporary and millennial is a good representation of this time. And Varoom’s target user demographic consists of designers and creatives who would certainly be well aware of, and familar with, Pantone.

Pantone has been doing Colour of the Year since 2000, so I decided to narrow it down to the past decade, 2008 to 2018. (click through to read fascinating descriptions of the colours from 2007 to present day)

Now that I have the colours I have a few ideas on what I want to illustrate with them. Firstly, I thought of linking each colour to an iconic image/character of this decade, and putting these characters together in a bird’s eye view kind of image much like this 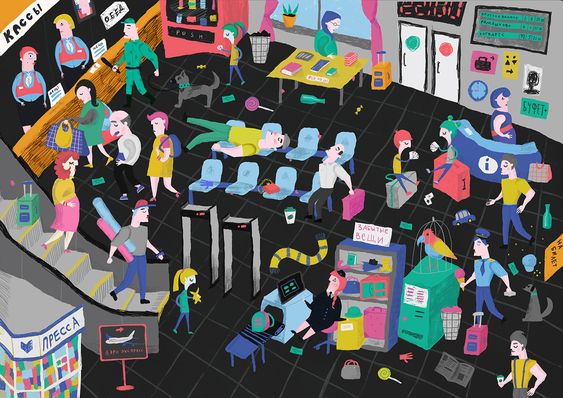 Here’s how this could work:

Unfortunately not all the colours match up 100% (emerald isn’t exactly that shade of starbucks green) and also I’m not really sure if I can think of anything to fit the stranger colours like Blue Iris or Marsala…. might need some help with that? 🙁

The second idea I have is to illustrate portraits of iconic people all of whom are known for their style (think Kim K, Trump, the entire Stranger Things cast – not necessarily fashion style, but also mannerisms and traits) using all the pantone colours, in the style of Qwaya_ and Mari Kanstad Johnsen, both of whom I referenced in a previous post. This is a little more straightforward than the first concept but could work well too (I hope??????). And it would make it possible for me to work analog, with embroidery or pastels… an idea which I’m quite enamored with as of now.

However I do really like the first idea because of how kistch it could possibly be, I mostly just worry about finding a good representation of each colour.

Lastly I also considered going full abstract, and letting the colours speak for themselves but I fear that that could be a bit toooooo much of a stretch?