CONTEXTUAL ANALYSIS ON THE COLOUR OF THE CHINESE COFFEE POT

The coffee pot was made during the reign of Qing Dynasty under Emperor Yongzheng (1723-1735). Under his ruling, the colour of Famille Rose of Chinese Porcelain was developed. It was a highly demanded colour that became more popular than the blue white ceramic.

To begin with the analysis of the colour of the Chinese Coffee Pot, I will begin  the analysis by assess the Chinese porcelain supplied during the period around 1735. As tastes and ethos of China has always adapted its ceramics industry to fit the needs of it clients who ever they may be, it was during this period that the Chinese became especially interested in Western technology and science. Famille Rose enamels were developed as a consequence of this interaction. The impetus for the development of this new palette was the direct involvement previous emperor Kangxi (1662-1722) who desired to improve expertise in the manufacture of all crafts, especially in relation to learning about technology from abroad. Therefore, his fourth son, Emperor YongZheng appointed Nian Xiyao as administrator of Jingdezhen, who also personally supervised the manufacture of the porcelain destined for the Imperial Court. Under the ruling, the production of blue and white wares decreased and a new style called famille Rose, described as ‘flowery’ emerged to be the dominant palette in overglaze decoration.

FAMILLE ROSE
Described as ‘flowery’, it was a new colour palette of the era of Chinese porcelain. It takes the name from a rose-colored enamel (gold chloride) which makes up a characteristic colour in the palette. Other significant colours in the palette are opaque yellow and opaque white. The majority of the enamels is opaque or semi-opaque and does not flow when being fired, could be fired at a lower temperature and had a wider colour range. As a result, it appeared softer, gentler and more feminine. The pink enamel characteristic of this ware is a precipitate of gold that appeared in China about 1720, having been discovered by Andre Cassius of Leyden about 1670. This opaque pink, called “purple of Cassius” is found together with blue, pale green, yellow and mauve enamels.

TECHNIQUE
They were created from white porcelain clay that was first covered with an opaque white glaze before being fired at a very high temperature. The decorative motifs were then applied to the glazed bodies using brightly colored, famille-rose enamel pigments that were fixed to the vases by a second firing at a much lower temperature. The rose colour that gives its name to this colour scheme is created from colloidal gold (a suspension or colloid of sub-micrometre-sized particles of gold in a fluid). This ruby red colour was augmented by two other newly introduced coloured enamels, an opaque white which was made from fine crystals of lead arsenate, the other new colouring agent was lead stannate used for the opaque yellow. These colours, while new to China, were certainly not new to Europe but the effect of them on porcelain certainly was new. It was also used for Chinese taste or domestic market porcelain, but was also used to decorate a vast array of Chinese export porcelain of all shapes and sizes. Typically the earlier enamels in this palette was applied with glue as its base which helped with building thick layers of enamels, while later versions are applied with the use of rue oil as a medium, which gives thinner layers.

INFLUENCE
During the Qing dynasty, Western art influenced China primarily through the Jesuit missionaries who served in the imperial court. Western missionaries had first arrived in China in the sixteenth century to teach Christianity, but after they were forbidden to proselytize their religion, they instead taught the Chinese about Western science, mathematics, art, and philosophy. The palette seems to have been developed with influence from European taste and demand and with technology imported via Jesuits working within the Imperial palace in Beijing. At the same time, In Europe and foremost France, the emerging rococo fashion, being an important export market also called for softer colours in the decorations.

BEAUTY THEORY
They often have an elaborate arrangement of minutely delineated border patterns around the central subject (usually pretty women), demonstrating the new, and later widespread, idea that the beauty of an object is directly proportional to the amount of decoration on it. This theory was to be one of the causes of the degeneration of later Chinese and Japanese wares; it was, however, by no means confined to Asia and can be seen in most 19th-century European porcelain.

ANALYSIS ON THE COLOUR OF THE CHINESE COFFEE POT

At the same time, the choice to learn, develop and apply the new colour might be a step taken to level up the competition of porcelain market in the Europe. The demand for porcelain might have became saturated before (due to the long lasting demanded blue-white porcelain), therefore there was the need to make the newly innovative colour that give European more options and choice. Also, due to the unique colour of Famille Rose, the Chinese Coffee Pot might  also be bringing the ‘new Chinese’ to the Europe.

When I first see the colour of the object, I didn’t know that the colour palette was popular as I  was not really familiar with it before. Proceed to research more, I found out that there are different palette throughout different period of Chinese porcelain timeline. Another thing new was that to know that apparently those colour palette affect the value of porcelain artefact and especially the ruling period that can be seen from the imperial mark. To share more on this, interesting fact was that the Famille Rose was not the only porcelain colour made of the mix between ‘China’ and ‘Europe’, the previous ruling period had started to developed it and the palette was name Famille Verte, and the following ruling period developed it even further and came with another version of Famille Rose. I also find that this kind of ‘colour transfer’ is something that show the interconnected good relation between Chinese and European.

With the palette before

with the palette after 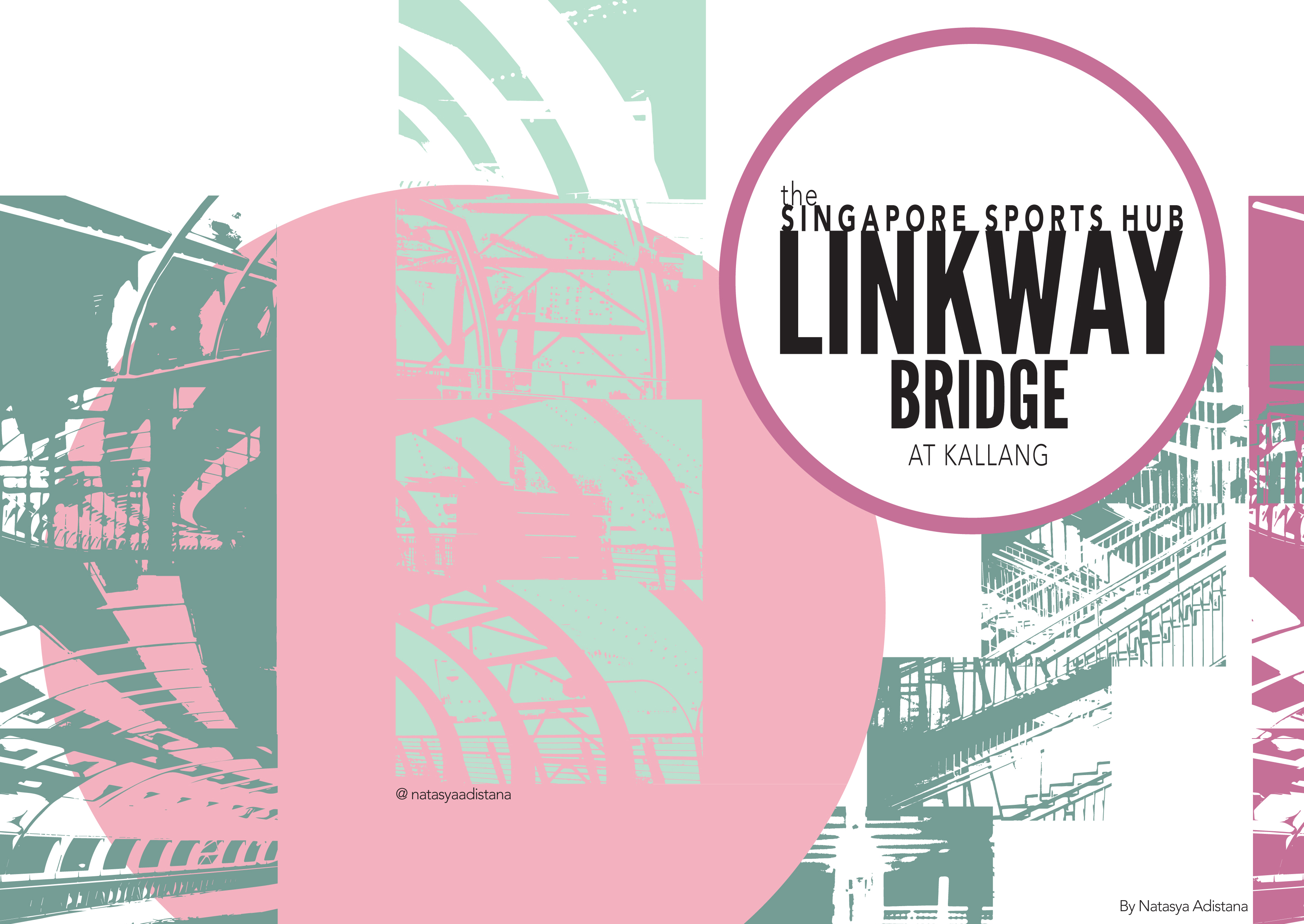 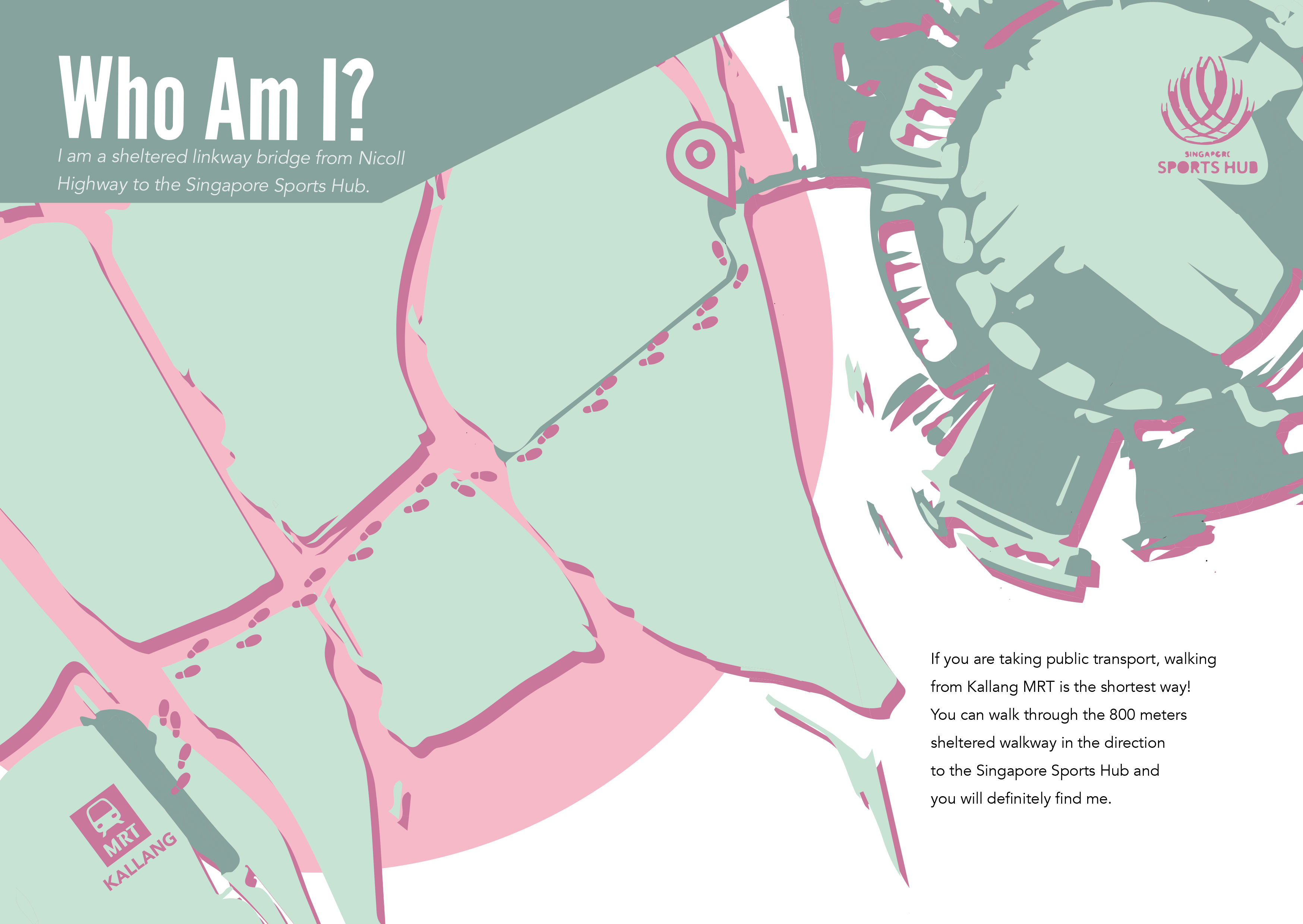 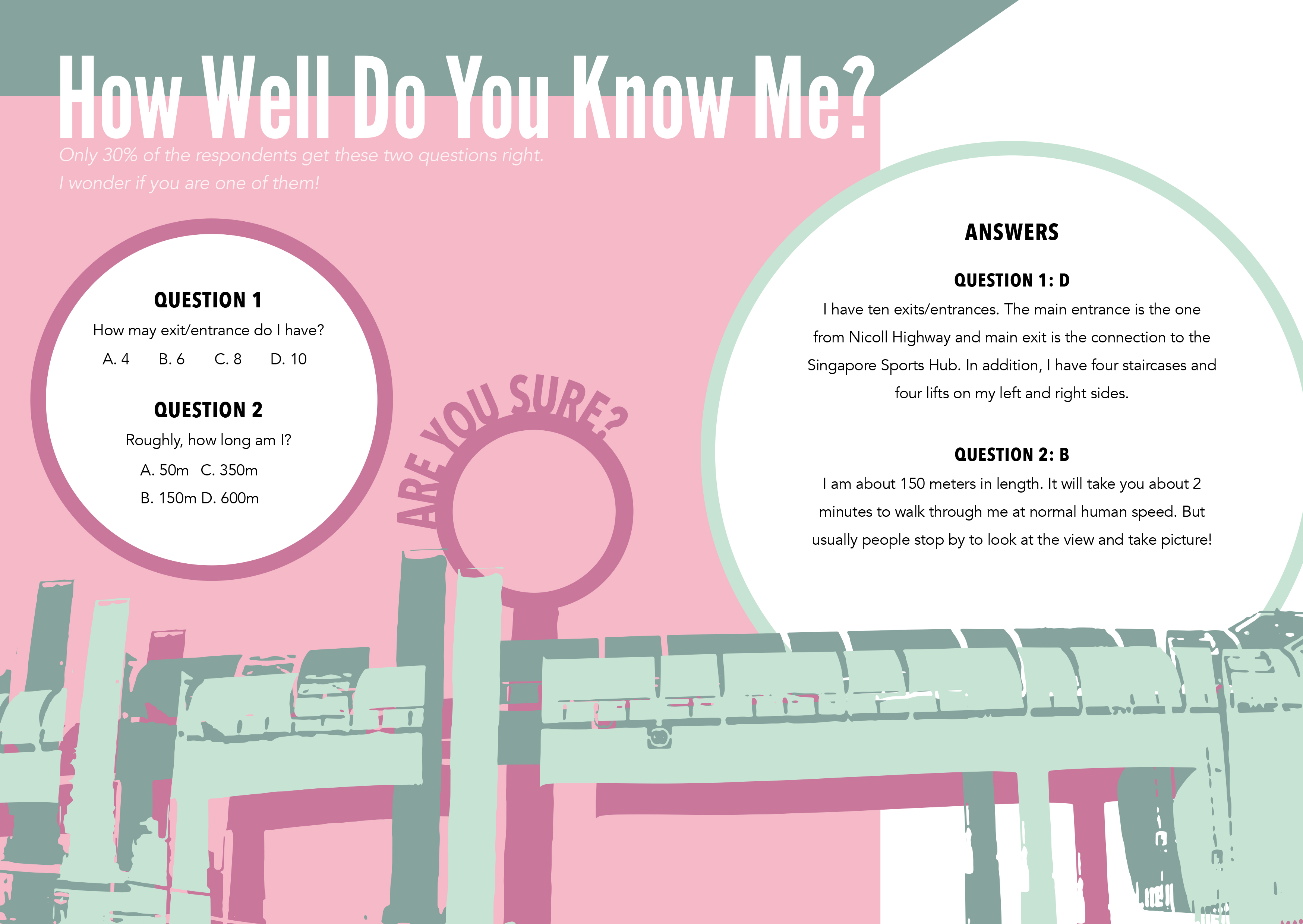 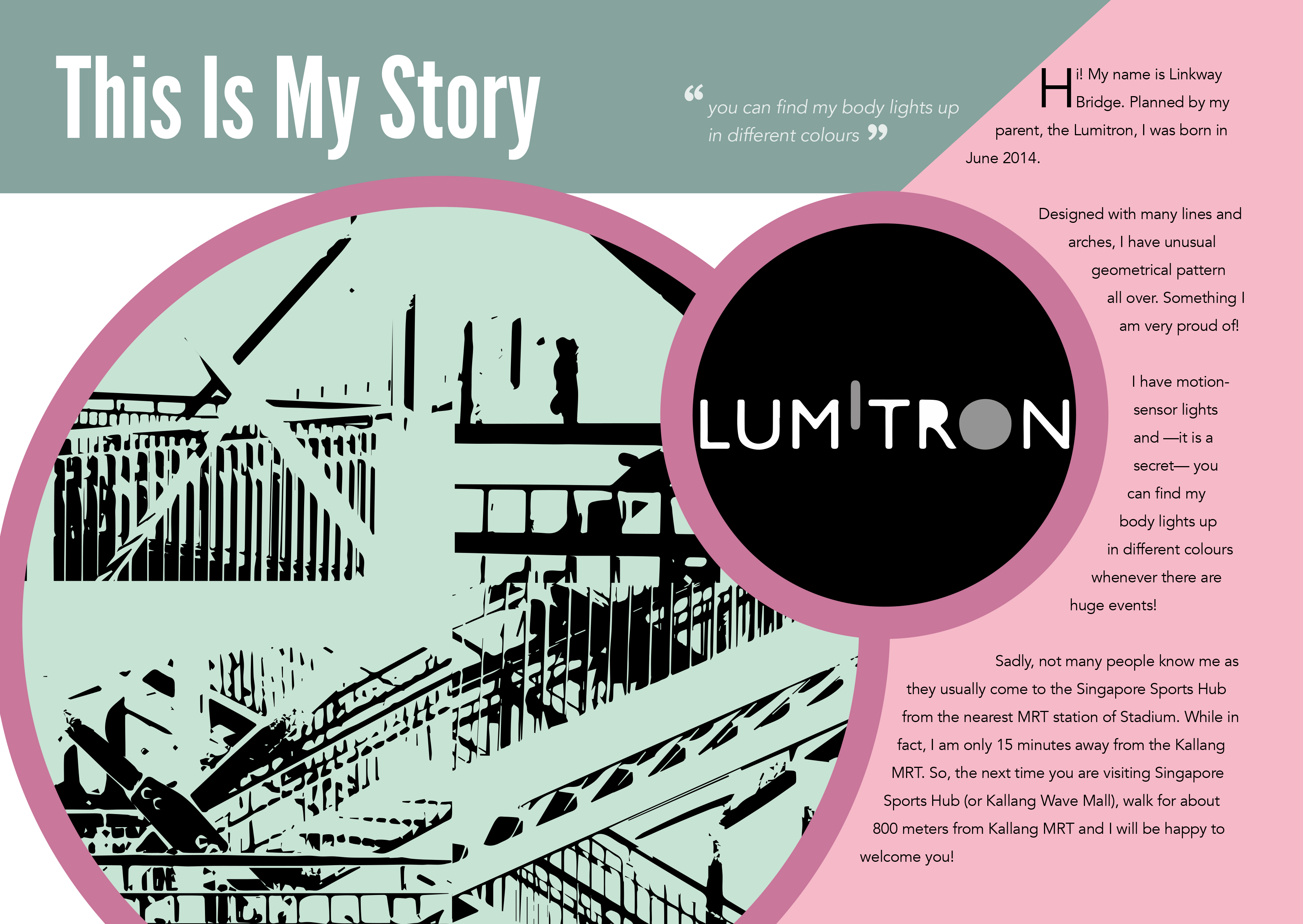 The Singapore Sports Hub LINKWAY BRIDGE at Kallang is a zine about the bridge introducing itself to the readers. Attempting to make itself more known than it currently is.