INTRODUCTION
Clown fish refer to 28 species of fish that are living around tropical coral reefs found in the warm water Indian, Pacific Oceans and the Red Sea. Here are some of them. Since the famous Disney movie Finding Nemo, the popularity of the clown fish increased and they are being breed by human. (Nemo is the Occelaris sp.) The Oceans, Reefs & Aquariums (ORA) is the leader in captive bred clownfish. Below is the pictures of the clown fish species with some addition developed by the ORA.

KEY SENSES
1. SENSE OF SMELL
Like people, fish have noses. Water flows through holes called nares into two chambers. Each chamber contains a rose-shaped structure called a rosette. Odor molecules stick to cells on the rosette called neurons. Those neurons then shoot a quick signal to the brain. That’s how a fish detects a scent.
Upon hatching, baby clownfirsh rise up to the sea’s surface and begin the planktonic stage (floating on the sea) for about 11-12 days. Then, they will use their sense of smell to find their way home. They swim toward the scent of leaves from the islands’ trees. They also detect odors to find food, avoid predators and prepare for mating.
(!!) The sense of smell worsen as the water becomes more acidic! At the current rate, clown fish might lose their ability to ‘go back home’ and avoiding predator by the end of the century!

2. SENSE OF HEARING
For clown fish, the ability to hear is crucial as it makes them able to detect and avoid predator-rich coral reefs during the daytime (coral reefs are home to many species that can feed on small clownfish). They do this by monitoring the sounds of animals on the reef, most of which are predators to something just a centimetre in length.
(!!) Researchs show that clown fish in more acidic water showed no preference for moving away from threatening sound, while those exposed to normal levels of acidity move away from the perceived danger source. The acidity doesn’t seem to physically damage the fish’s ears, so maybe the damage is neurological, or maybe they are “stressed by the higher acidity and do not behave as they otherwise would.” This could seriously impact their survival in the long term.

RANGE OF MOTION
It can freely move to any direction by moving its tail to move forward and side fins to help them steer.

A journal said that clown fish performed a bizarre little wiggle dance, flapping its fins while dodging and turning.
That creates fresh water circulation for the stationary anemone, allowing it to access more oxygenated water, speed up its metabolism, and grow faster. That’s also good news for the clown fish, which have more room to hide within the anemone.

So I’ve been researching on human senses, to be exact are hearing and touch.

HEARING (Audioception) is the ability to perceive sound by the sense of hearing.

How does the human sense of hearing work?

Process of hearing:
Sound waves enter the ear canal, making the ear drum vibrate and moves the ossicles. The last bone of stapes knocks on the membrane window of the cochlea, causing fluid in the cochlea to move. This movement cause stereocillia to bend and create electrical signal that caused the auditory nerve to carry signal to the brain.

TOUCH (Tactioception) is the body’s ability to feel physical sensation

How does the human sense of touch work?

Process:
Stimuli is accepted by somatosensory and the nervous system carry the information to the brain.

Similarity between frog and human?

It is really fascinating to find out that we are somewhat quite similar to frogs. It is not something I expected before. 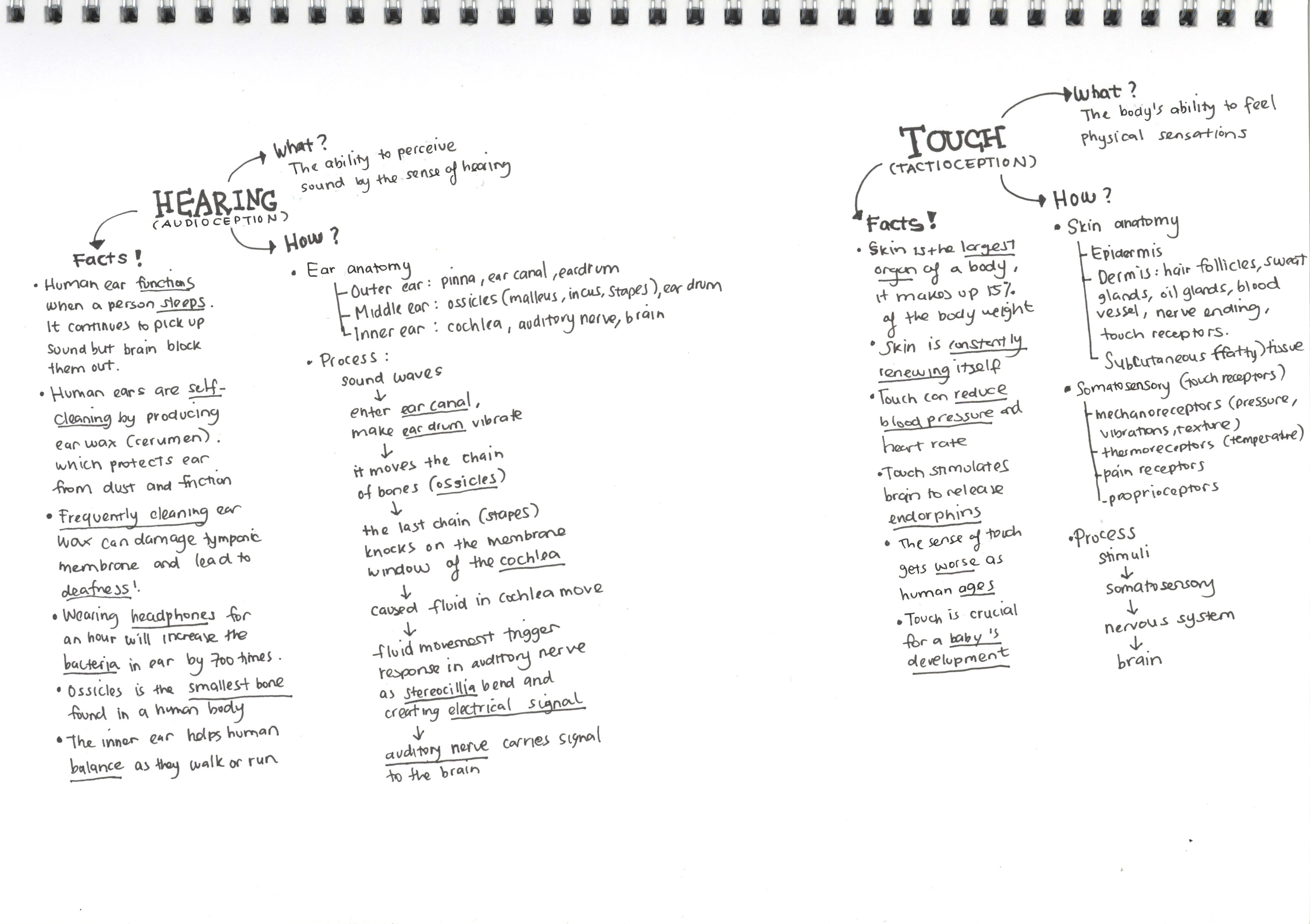