Hullo~ We shall now begin the first part of our project 3~ the last project of the semester, wow! (๑•̀ㅂ•́)و

Ok, so while searching for installations, particularly video and sound ones, i realised alot of them were interactive ones? one AIMED at being interactive, or had an element of including the audience as part of their installation.

I think that is one part that daunts me because im not sure how i’ll do that and as we have learnt, like how is the audience gonna react to the installation!

okie so . first up artist research!

So just to kick off this  , i’ll like to start with sound and video

okay now getting onto the more serious stuff~!

when i saw this project, i was quite awed. Alot of us, the audience just went to automatically sit on the sofas and chairs provided, kinda like to appreciate the screening in a extremely relaxed manner. To be honest, the last thing I thought of was the message of this art piece to be of environment. Only after reading the artists’ words, i then realised the depth of this piece.. quite striking.  trying to the waves come alive and trying to make the line between digital and real life disappear. I thought it was quite effective in terms of choice of space, lightning and of course the drawings and movements of the waves that occur in that 10 minutes. still remembered it passed by super fast.

I quote from Team Lab:

Historically Japanese artists painted and expressed waves using a combination of lines. These assembled lines give the impression of the life and energy of the sea as one living creature. Looking at the sea we feel awe, and it is probably due to this awe that Japanese artists chose to express the sea as a living entity. Japanese ancestors possibly saw the world as it is depicted in classic Japanese pictures. Based on this idea, teamLab considered recombining the subjective view of ancient times with the fixed objective view of the modern world.

Susan won the turner’s prize with her piece Lowlands but many people are finding it hard to believe that she did win the prize back in 2010, to see or HEAR why, click the vid below:

As i quote from the Tate

Susan Philipsz is an artist who installs recordings of her untrained singing voice in public spaces to make people aware of their surroundings.

Which in my opinion she did success because she certainly did make me take a double take on my environment with her unique voice . HAHA.

Now to take this a little further, i decided to see if could find any relevant artist who used feminist as a main subject on their art installations.~! hard but perhaps worth it since our group had this idea from the beginning to discuss on that.

Just a quick summary about women artists and the main take away i got is that:  1. women initially had to use/explore different mediums to make their works stand out 2. even change their names 3. still trying to explain their hold on the art world and scene.

3. Ever is all over by Pipilotti Rist

THis REALLLY reminds me of Beyonce’s Lemonade MV when she smashes the cars in happiness. Beyonce as a popculture icon and a woman who strongly  advocates feminism? Perhaps this is no coincidence. 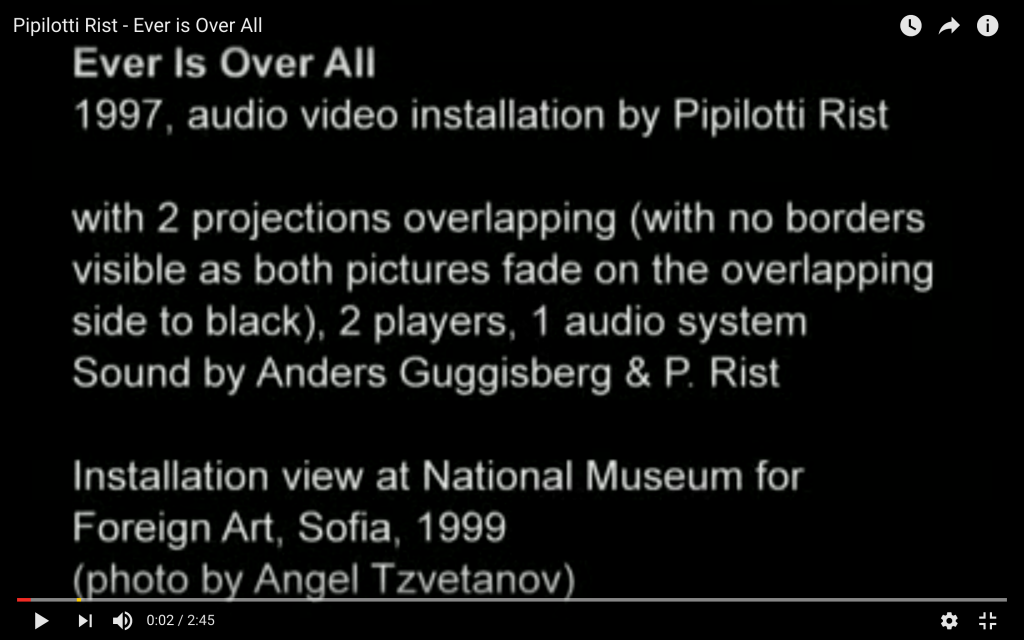 Rist hopes to bring about or as I quote:

disrupts the female objectification typical of both Hollywood and art history, creating short and color-drenched works that are as sexual as they are strange.

There is definitely a certain strangeness  to her piece of work and once you’ve read her artist statement:

there is room in them for everything (painting, technology, language, music, movement, lousy, flowing pictures, poetry, commotion, premonition of death, sex and friendliness) – like in a compact handbag. Her opinion is: Arts task is to contribute to evolution, to encourage the mind, to guarantee a detached view of social changes, to conjure up positive energies, to create sensuousness, to reconcile reason and instinct, to research possibilities and to destroy clichés and prejudices.

I also think in particular her work can help me to find a direction especially in expressing feminism to a larger audience especially with the use of video medium combined with sound. 🙂

During its seven-minute span we see, again and again, the transformation of the drab secretary Diana Prince into the super-heroic Wonder Woman. By isolating and repeating the moment of transformation–spinning figure, arms outstretched–Birnbaum unmasks the technology at the heart of the metamorphosis. In this illustrated examination of Birnbaum’s video, T. J. Demos situates it in its historical context–among other developments in postmodernist appropriation, media analysis, and feminist politics–and explores the artist’s pioneering attempts to open up the transformative abilities of video as a medium. Demos examines Birnbaum’s influence on such artists as Douglas Gordon, Pierre Huyghe, Philippe Parreno, and Candice Breitz, and the turn toward “postproduction procedures”–the mobilization of existing imagery for innovative uses. He also reveals a fascinating historical shift in the reception of Birnbaum’s work: a move from an emphasis on her deconstruction of mass culture ideology to an appreciation of her creative use of consumer imagery.

After some research as well, it looks like she liked the idea of TV beings subversive in its own medium which i guess that can translate to the current idea of our ipads and smartphones itself which is pretty cool

another thing would be how she reference the appropriate pop-culture references and allowed the piece to become relatable :O

Well another bonus is this article i found on the net, not exactly sound/video installations but an interesting POV ~!

So what the author found was that in this band, Body Count, they focus on “pussification of men” and in the song Bitch in the Pit, the author said (cringeworthy) lyrics that personify a woman brave and stronger than a man, fighting men on par in the ring/pit.  Almost as though of equal.

If youre interested.. can head over this link to find out more : LEL