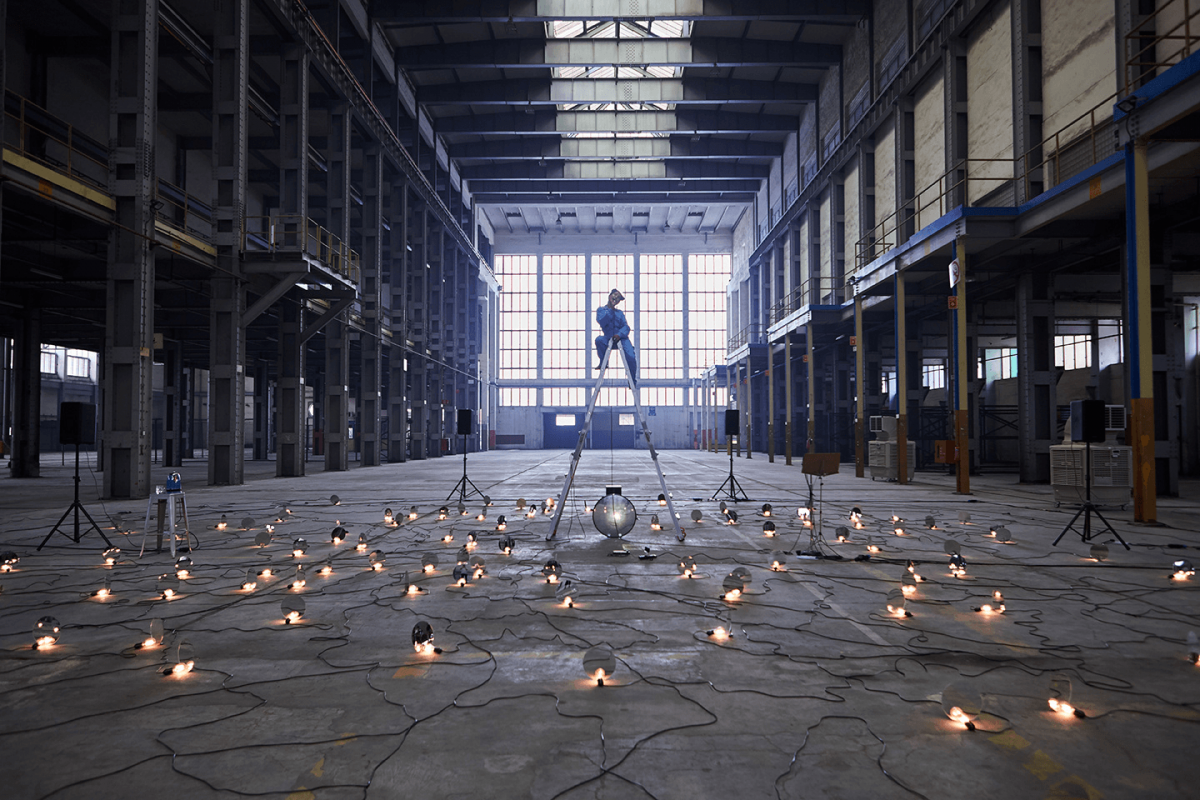 Utilitarianism follows the belief that the doctrine that actions are right if they are useful or for the benefit of a majority. Bauhaus elements are added as well (beauty + usefulness) , the artist portrays her works simplistically with just 100 same bulbs, wires to light them up and some double-sided round mirrors. These products seems to be everyday objects which, in relation to concept, is mass produced in many different forms. Some mirrors are round, rectangular, short and long. The same applies for the bulbs too.

Perhaps, the intention of making the products the same throughout, is not only Bauhaus, but also to create sense of “mass”, like a collection of the same thing over and over again. This could be critic on mass consumerism in today’s city life too. In relation to the works, there are laid out in same manner, with bulb and mirror side by side. The artist’s intention is suggestive of strong influence of Western principles with Greek philosophy (British philosopher created Utilitarianism) and German art movement (Bahaus). These influences are also critical to look into when we consider how they portray artwork, especially when put in local context – they appear very far apart.

the hardware and software of a power station – its utilitarian principles and generations of workers.

As mentioned above by artists, this artwork worked well as a tribute, especially with ambiance that resembles to that of a religious vigil taking place.

There’s also that possibility that this could be figurative too – where in a capitalist democratic society like Singapore, our quest for control and power also creates a rather dog-eats-dog way of thinking too. Therefore, the ladder could symbolize idea of climbing our way to the top, thus forming a hierarchy. 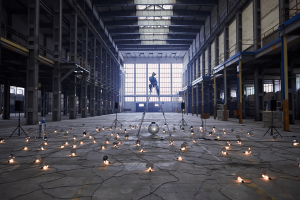 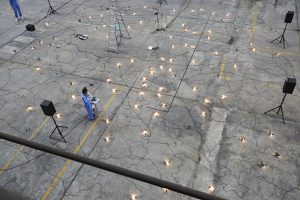 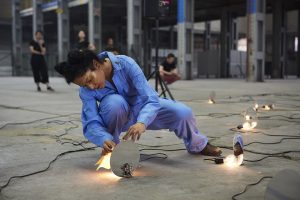 With lone figure dressed in blue, as main character in performance art also representative of blue-collared workers. For example people who work in professions deemed to at the lower hierarchies of society – namely those involved in manual labor. My take for this work is that it is meant for locals to be directly affected by the consumption of power, light that we often take for granted. With the use of ladder, representing a hierarchy, and video projection of portraits at the bottom, seems to me reflects the natural hierarchies that categorizes people of blue-collar at lower ends and those who “make their way to the top” as upper end. This is just my interpretation.

The materials used were very clever, with the ladder, and the bulbs which are repetitively displayed all over the space – as if to show the concept of hierarchies where “you climb your way to the top” a typical phrase that is somewhat present in cultures such as the workplace, for example. W

However, the artist’s video projection of portraits seemed a bit off to me, but there are several assumptions I’ve made. 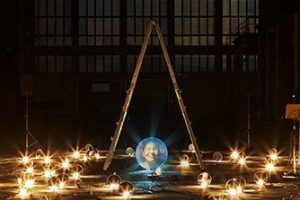 The close up faces of the people were not identified. Video projection featured both men and women, much older in age where they appear to show facial expressions of them smiling and some closed.

Talk about functions of materials – interesting element is the round mirrors beside the light bulbs – are they meant to portray something for viewers? Mirrors are used for reflections so could it be that, based on the way they are positioned, is artist subtly making us viewers that our reflections towards the usage of power.

In summary, this multimedia installation piece seems to suggest several spiritual, reflective elements with strong concepts to hierarchies and personal identities of those who are categorized to the lower rungs of society – blue collared workers, as they are the ones performing manual labor , or industry. It seems artists are trying to portray them in a commemorative sense.

In terms of spiritual/religious elements, it is seen in the way vigil-like set up. What appears to look like candles lit up individuals are actually light bulbs, with a distinctive illumination of photographic projection of portraits of older laymen and laywomen alongside the lights. It looks beautiful when it gets dark – because the illumination gets stronger.

The interaction seemed to be minimal, with direct gazes of the audiences at the main subject, a young lady in blue uniform, perhaps to identify oneself as a blue collared worker, performing on her own. A few audience members are selected to hold the light bulb switch and wires. And assuming the lady give commands, they are the ones to heed her.

The performance piece was not recorded. However, some photographs featuring the main subject, a woman dressed performed several occasions. One include 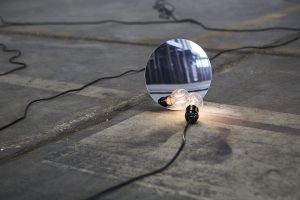 In retrospect, the terms social practice art in this sense is quite broad because it covers different themes, which are free to be interpreted by the artists and non-artists. Undeniably, there will always be a focus towards a type of demographic, in my opinion. That would direct viewers and art critics towards understanding the theme and being fully aware that they are around us. The work is simply an outlet to express that theme, in relatable means, because after all the work is synonyms to “relational art”. It relates.

With that being said, the work directs its focus on the blue collared workers, of socity, where they often work at backend – unrecognized for the effort in provision of everyday products to ensure safe consumption.

Also, I found that materials artists use can be symbolic – representing an idea or a concept that relates to mass audiences. I think this is the beauty of social practice art making, it relates to people!

In the bigger picture, it is portraying the effects of capitalistic society where hierarchies are naturally formed, making the creator/manufacturer the demographics where they are most unappreciated, but artists puts spotlight on them to give them the recognition they deserve.