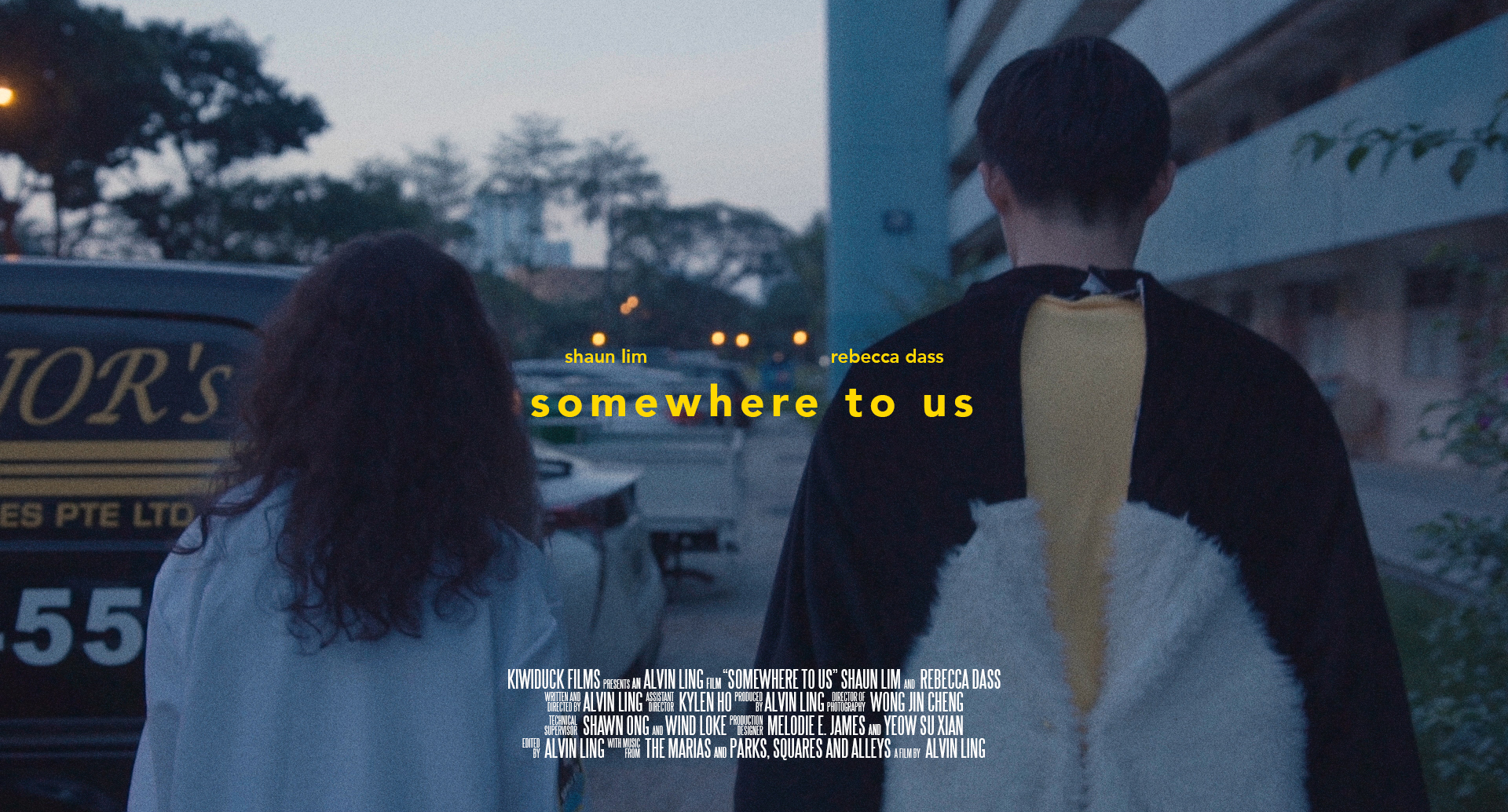 How I approached the theme “Home” was through the way it connected 2 childhood friends and their journey home. In my short film “Somewhere To Us”, we follow Paul & Sam who are stuck waiting at the bus stop after a Halloween Party, this situation gives Paul a chance to tell Sam things he was previously not able to.

After the pitching process, I began working on my screenplay for a short film titled “Somewhere to Us” under the theme of “Home”.

Once that was done, I started the audition process. Firstly by posting an open casting call to invite actors & actresses to audition for the role of Paul & Sam in my short film. 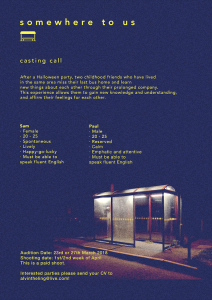 I auditioned about 20 people in total for the roles, it was a long process but I finally managed to lock down on my talents, Shaun & Rebecca.

It was quite an interesting story as I almost didn’t call in Rebecca when she emailed her CV as I felt she didn’t look the part of the role I was going for. But in the end, she blew us away during the audition & was definitely a great choice for the role. 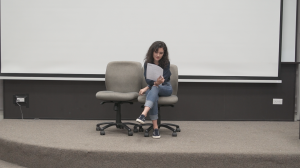 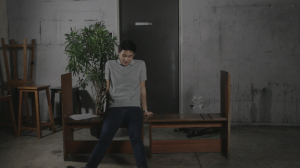 Some screengrabs from their audition clips.

I went out at 2am on a weekday to recce the location. It was just outside of school & would be convenient for us to transport the cast & crew there during the shoot day. Also, it was relatively empty and had a big road in front it with little cars which were ideal for the shoot. 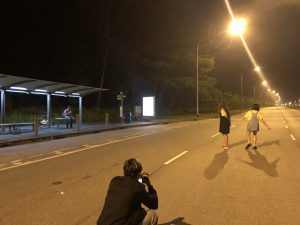 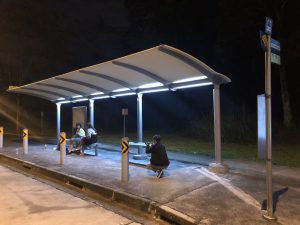 BTS from the location recce. 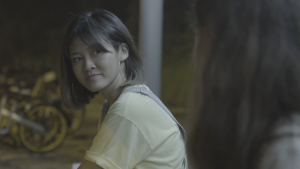 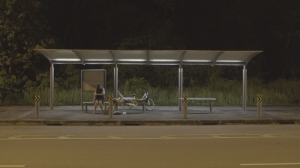 We shot some test footage as well so I could try colour grading it after to see what picture profile would be the most ideal to shoot in for the low light conditions we were faced with. 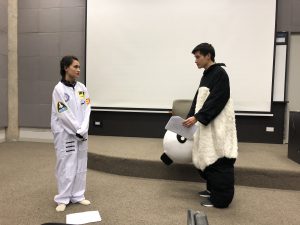 I got the talents down again once more for a script read as well to let them try out the costumes for the shoot. The panda suit was kindly loaned to me by Kylen & I ordered the space suit online. 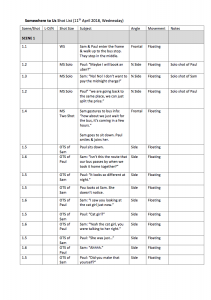 As it got closer to the shoot date, I started work on the shot list & callsheet. 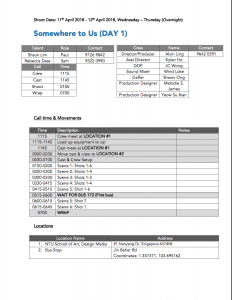 I had 2 shoot dates. 1 was the main overnight shoot & the other was a short scene that takes place in the early hours of the morning. I sent it to my cast & then came production day! 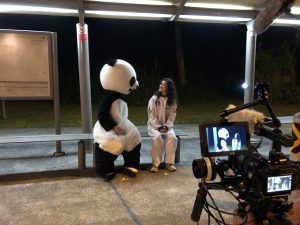 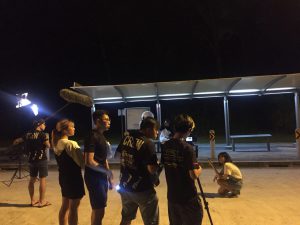 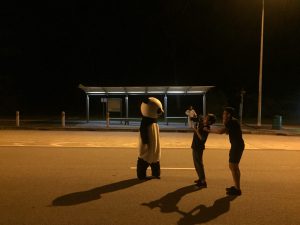 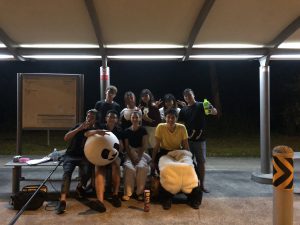 BTS shots of the production of “Somewhere To Us”

One of the main challenges on set was sound, as the roads had cars occasionally driving by even in the wee hours of the night. We had to pause in between takes to allow cars to pass before continuing.

To make things harder, there were a people doing sticking their heads out of a van that was doing joyrides around the road we were shooting on, also a couple of ah bengs who were fighting on the opposite side because their e-scooters broke down.

Another scene which was a challenge to shoot was the dance scene, as the first shot was a 1 take continous shot, we had to shift all our production stuff into the car which was driven far behind to be hidden from the set. Also, cars were driving by, and safety for my cast & crew was an important thing to be wary of.

The way we shot the dance scene was inspired by this Polish film called “All These Sleepness Nights” recommended to me by a friend just before we began production. I showed it to my DP and it was through that how we planned & choreographed that single take first shot.

But all in all, we got the shots we needed and wrapped on time! 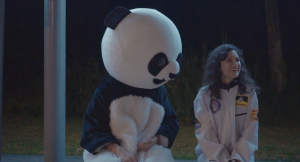 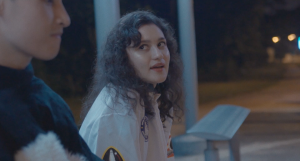 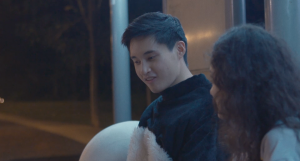 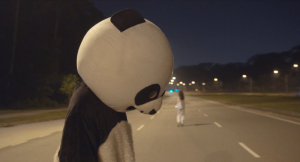 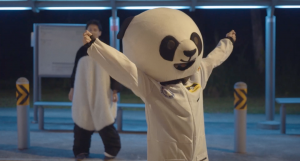 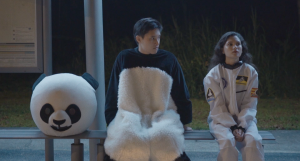 Some stills from the film

Duration:
Keeping to the duration of the assignment was a challenge as the film had a lot of dialogue and silent moments that I wanted to keep to create the sense of awkwardness between the 2 characters.

But thankfully, with the feedback from friends & Nicole, I trimmed out dialogue that didn’t move the story forward & still allowed some leeway for the awkward silences in between, while still keeping the rhythm & pace I wanted for this film.

Music:
Even before the shoot began, I already had a song planned in mind to use for the dance scene, we actually even had the people who came to audition dance to that song. I initially reached out to a composer whom I’ve worked with previously to try to recreate a similar tune of that song. But due to my own budget constraints, I reached out to the band & their manager via email & they were kind enough to allow me permission to use the song in the film! And with that, we shot the scene while playing that song in the background so the actors could feel the mood & tune of that song in the location itself.

Also for the end-credits music, I reached out to another band who also allowed me the usage of their song. It was quite a fortunate outcome as I couldn’t have imagined using another song for these 2 scenes. And the lyrics of these 2 songs do provide a sense of meaning for the story between the 2 characters as well.

We’re Not Just Friends – Parks, Squares and Alleys for the ending scene.

I was happy with the way the film turned out & in particular the pivotal dance scene between the 2 characters! 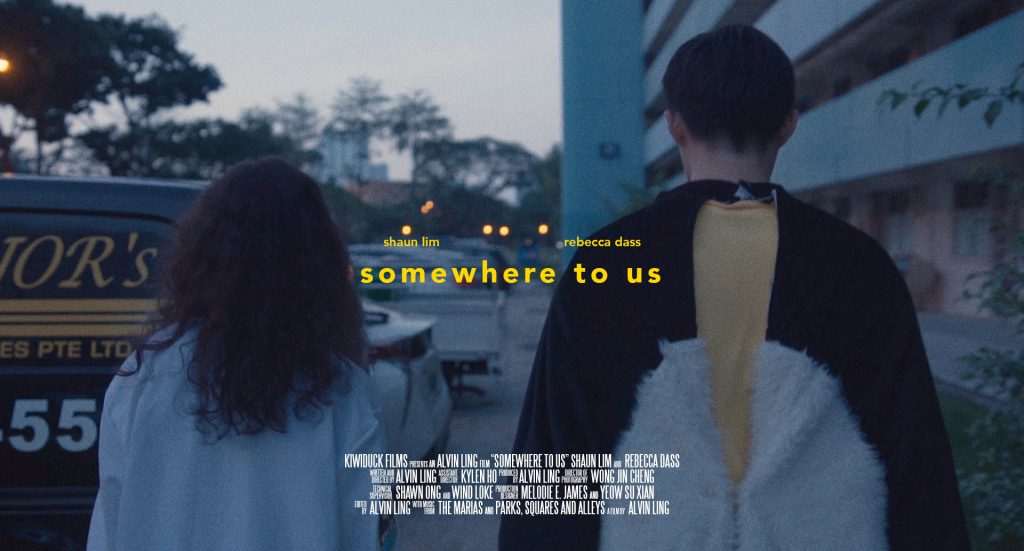 It was a challenging lead up to the production of this film as I was stuck with coming up with an idea even before the pitch.

Initially, I didn’t want to do a romantic-dramedy type film again as it was something I did enjoy doing but have done before. I was trying to go for something different instead of something so conversation-driven. Personally, I felt the addition of other elements in the film helped to make it more distinct and different from just your usual romantic-comedy & I was happy with the result.

With the support of my friends who provided me with so much feedback & encouragement along the way, it allowed me to push through & create this film that I am happy with.