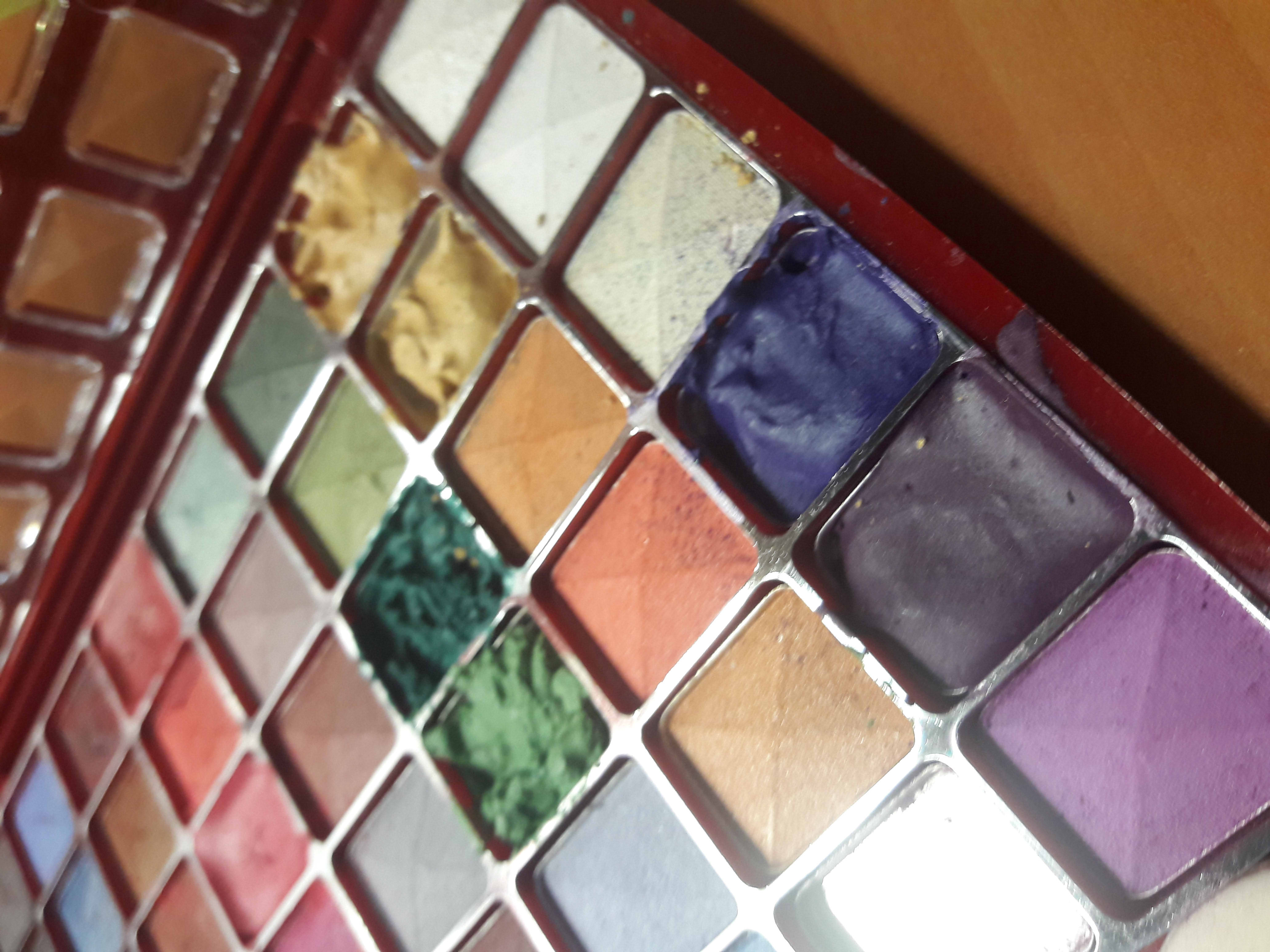 Was everyone else really as alive as she was?… If the answer was yes, then the world, the social world, was unbearably complicated, with two billion voices, and everyone’s thoughts striving in equal importance and everyone’s claim on life as intense, and everyone thinking they were unique, when no one was. One could drown in irrelevance. (Atonement, by Ian McEwan)

It’s frightening to think that I am a unique individual, seeing as the world is so large that, all things considered, we eventually become この星の無数の塵の一つ, “one of the innumerable specks of dust on this star“. I find it so frightening that I can’t bring myself to treat myself as special. And yet, despite all that, I find that humans are so infinitely unlimited, that I can’t possibly describe myself, or anyone else, with mere words. How can I capture the essence of myself through 12 panels?

And thus, the compositions became a bizarre blur of those thoughts, of humanity’s struggles with their existences, where I am a part of that humanity, yet looking at it from a distance.

And a scanned in version, for proper documentation.

First, I will mention those which are common points across all compositions.

In deciding the subjects, I drew up a chart with keywords for each panel, and worked towards that keyword. In choosing my colours, I originally abided by the 4 temperaments. While I didn’t follow it strictly in the end, it was still rather useful in providing me with a general gist and starting baseline of colours.

The keywords were Cynicism and Conformity. Once you become aware of the true nature of humanity, it’s easy to be disgusted, and want to live separate from them. People’s words drip with falsity and it is difficult to interact with other people, knowing that under the facade of calm they recoil with disdain at you. Nevertheless, in this world where it is mandated to act like you’re alright, there is no option but to suppress yourself and laugh stupidly, act dumber than you actually are.

The keywords were Seriousness and Efficiency. In a fast-paced world of cruel productivity, those who are serious are bound to exhaust themselves. Many a time have I found myself in a position where people who don’t care don’t bother to do anything, and those who know what must be done end up crying alone as they work endlessly, because there is no other option open to them but to keep going at the cost of their own happiness.

The keywords were Sensitivity and Uncaring. Joy advised me to shift from Black to another colour to avoid monochrome harmony, so I went with violet to create an overall double complementary. For those of sensitive natures, we find that even the slightest brush of shoulders without an apology is something painful, a symbol of rejection. And yet, it must take a certain level of ego to feel that you deserve more, when you are such an unimportant creature, and these thoughts which flow into each other turn you into a creature which dives deep in and hides from everything.

The keywords were Introspection and Diversity. You can think all you want, feel that you are being forced to conform, or made to work excessively, or despised by everyone, but in the end, you must realise that all that doesn’t matter. The world is too wide, too expansive, that you are but a mere speck, insignificant. There’s no reason for you to fight against that truth. There’s no reason to try to keep forcing your way, and rejecting the world is just being difficult and hipster, and tiring. It’s easier to forget everything, and just be resigned to that existence.

In terms of artist references, I thought I’d divide it up more comprehensively based on what I referred from them.

Also, I have some experience with watercolour and making paints, but not so much with gouache. Initially I wanted to try oil paints to contrast water and oil, but had to give it up after I realised that it was drastically different from watercolour, generally difficult to handle in terms of lack of drying speed and lack of translucency, impossible to be kept in cakes like watercolours (and thus I would need tubes), and I couldn’t determine if they were well-mixed since I rarely set eyes on oil paints.

I don’t have a video of me making the watercolour with gum arabic, but here’s an older video of the first time I did it (I added too much binder, unfortunately, but learned from the experience). It’s basically the same as with linseed oil, just that you don’t need turpentine or the like to dilute it.

I also learned the hard way that there’s little need to tint watercolour since dilution with water would already make it a lighter colour. I did, however, end up mixing a lot of paints to create shades, and in-betweens like red-orange, blue-green, or various hues of violet.

This is my palette. As a consequence of experimental colour mixing, I ended up running out of space. The colours were tested on the borders of the paper I used which was outside the frame of the pieces. I’ve attached each individually in my visual journal since it’s a little difficult to upload them.

Overall comments were that it needed to have more shading to fully bring out details, which I suppose, yes, is a very common problem with me, especially where I cut corners once I’ve determined it’s sufficient to avoid spending more time than necessary. No matter how much I layer it never quite seems to darken well, especially with brighter colours like yellow. 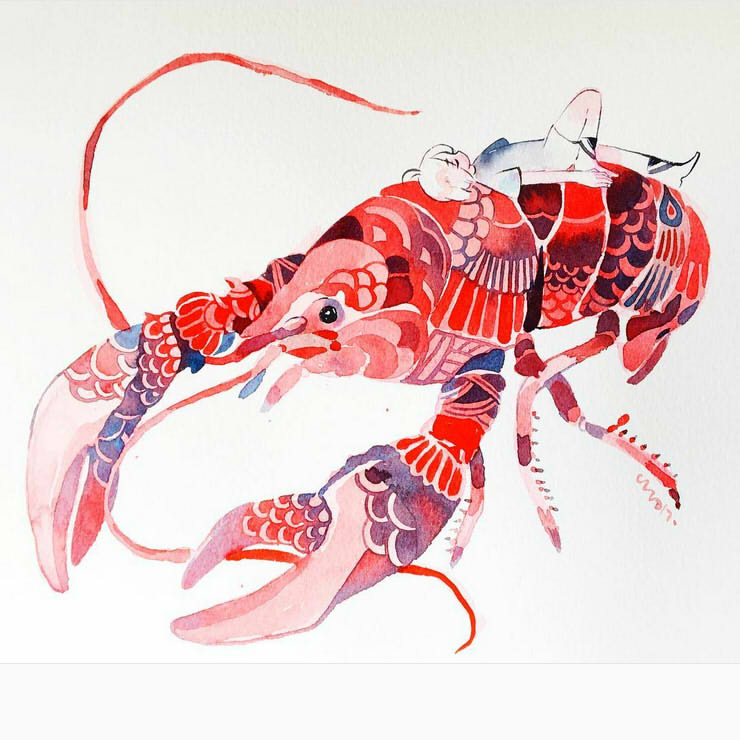 I’m here to do what I do best, which is fangirling over my favourite artists! And it’s even relevant to the project at hand! (Note: I use “they” to refer to those whom I don’t know their genders because I’ve been in enough non-binary gender debates)

I only chose to talk about artists with colouring styles I adore, as opposed to any artists, so. And since we have to have active colour choices, I’m going to (try to) identify and state what type of colouring style they use.

This was one of those random artists I followed. What attracted me to them was mostly the soft, girlish colours. Something else interesting is also how they tend to attach jewellery to their works!

Very high lightness overall, though with lower lightness for certain decorations. I would say they use analogous harmony for blending and colouring of the person, and an extended analogous (it’s not far enough to be complementary so idek) in terms of decor (clothes, accessories, etc). An earth tone frame too, to draw focus.

I’ve been stalking Nano since before they changed their username on deviantart, and what I adore is mostly how it’s a very limited palette mixed with an angular style to create something rather unique.

It varies, but I’d say they typically use monochromatic harmony with complementary hues? Other than black and white contrasts, there’s a lot of shades of green against shades of red.

I accidentally came across Fish during that one Yuri on Ice craze (I’m not into it but Instagram thought I was), and I mostly enjoy how there’s always an overarching dominant colour defining each piece, most likely because she tends to do a large wash before layering on the actual colours.

And the weeping willow's branches fall

This one’s pretty easy: it’s an analogous harmony (almost made to look monochrome since it’s so subtle) with a dominant colour for each, which gives off quite a good sense of warm and cool as well. As seen by the last picture, though, some blue-yellow complements happen.

What I love about Yue is their mixed medium and how the colours come together beautifully, regardless. They usually do a rough sketch with pencil, then refine the sketch, then watercolour to create a basic wash, then adding tone and hue with copic markers before defining edges with colour pencils. (If you see their commissioned works you will know that this is a stylistic choice and they can actually do other styles as well)

Also, they’re the one who taught me how to make my own paints!

This is really hard for me to identify though, because they blend a LOT of colours together. If I ignore the analogous blending I guess it’d overall be some double complementary? Like the blue green yellow purple of the 2nd work.

Her style is also rather unique to me, especially because she liberally uses resin on wood to create 3 dimensional works. On top of that, she combines acrylic paints and washi tapes, and uses a lot of polka dots and positive/negative spaces to add detail!

This is another difficult one to figure out, probably because her work is really complex such that different elements have different colour harmonies in themselves. For example the 3rd one has the green and blue (analogous) plants, but the 2nd one has the girl herself mostly being analogous (pink and purple) with some complements of yellow and green.

Again, another person I admire for more linework, but I do admire how they maximise their limited palette by using watercolour to vary the exact shade (and blending to create different hues). There’s also always obviously dominating colours!

I thought it was analogous, but I was woefully mistaken for the first one (as Joy pointed out) because of the blues, such that it’s actually complementary.

Definitely monochromatic harmony, no arguments. Joy mentioned to avoid, though, so I suppose I might work with blue/purple instead, which will make a pretty nice overall kind-of-square.

They mostly draw Pokemon fanart. It’s not even vector art, but the simple colour choices and

Hallllllloweeeen, cant decide wether I want to be a stack of pancakes or a slice of pizza for my costume this year

Could it be any less obvious? Monochromatic! (and well okay a bit of analogous)

Edit 26/10/17: I’m adding in Mayumi Konno, more for style than colour. My work is looking to tend towards body parts, and I feel she’s quite good at using the body to express things (although the expression and facial features are virtually identical for every single work, so).

I have a fervent admiration for complex works where colour harmony tends to be suggested than absolutely clear. It seems that many artists I admire tend to use analogous harmony as a dominant rather than a single hue as a dominating colour, but also add a level of delicacy by having 1 to 2 complementary hues.

I am also, however, about 89% certain I need to have clear colour harmonies, and if that’s the case I would look more at Nano, Fish, Koyamori and Norin. Of course, I haven’t quite talked about chroma and value as opposed to just hue, and I am also severely lacking in artists who actively use complementary colours, but hey. Gotta start somewhere right?