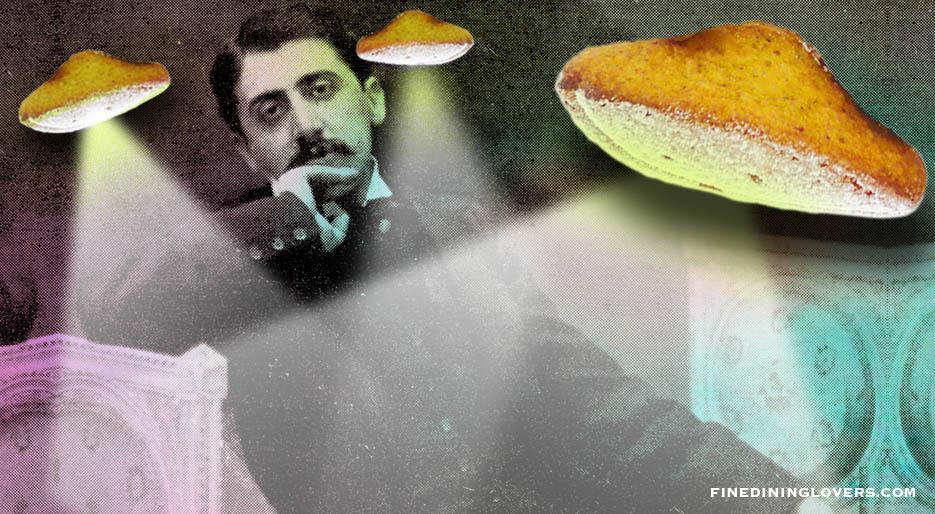 Many years had elapsed during which nothing of Combray, save what was comprised in the theatre and the drama of my going to bed there, had any existence for me, when one day in winter, on my return home, my mother, seeing that I was cold, offered me some tea, a thing I did not ordinarily take. I declined at first, and then, for no particular reason, changed my mind. She sent for one of those squat, plump little cakes called “petites madeleines,” which look as though they had been moulded in the fluted valve of a scallop shell. And soon, mechanically, dispirited after a dreary day with the prospect of a depressing morrow, I raised to my lips a spoonful of the tea in which I had soaked a morsel of the cake. No sooner had the warm liquid mixed with the crumbs touched my palate than a shudder ran through me and I stopped, intent upon the extraordinary thing that was happening to me. An exquisite pleasure had invaded my senses, something isolated, detached, with no suggestion of its origin. And at once the vicissitudes of life had become indifferent to me, its disasters innocuous, its brevity illusory – this new sensation having had on me the effect which love has of filling me with a precious essence; or rather this essence was not in me it was me. I had ceased now to feel mediocre, contingent, mortal. Whence could it have come to me, this all-powerful joy? I sensed that it was connected with the taste of the tea and the cake, but that it infinitely transcended those savours, could, no, indeed, be of the same nature. Whence did it come? What did it mean? How could I seize and apprehend it?

I drink a second mouthful, in which I find nothing more than in the first, then a third, which gives me rather less than the second. It is time to stop; the potion is losing it magic. It is plain that the truth I am seeking lies not in the cup but in myself. The drink has called it into being, but does not know it, and can only repeat indefinitely, with a progressive diminution of strength, the same message which I cannot interpret, though I hope at least to be able to call it forth again and to find it there presently, intact and at my disposal, for my final enlightenment. I put down the cup and examine my own mind. It alone can discover the truth. But how: What an abyss of uncertainty, whenever the mind feels overtaken by itself; when it, the seeker, is at the same time the dark region through which it must go seeking and where all its equipment will avail it nothing. Seek? More than that: create. It is face to face with something which does not yet exist, to which it alone can give reality and substance, which it alone can bring into the light of day.

And I begin to ask myself what it could have been, this unremembered state which brought with it no logical proof, but the indisputable evidence, of its felicity, its reality, and in whose presence other states of consciousness melted and vanished. I decide to attempt to make it reappear. I retrace my thoughts to the moment at which I drank the first spoonful of tea. I rediscover the same state, illuminated by no fresh light. I ask my mind to make one further effort, to bring back once more the fleeting sensation. And so that nothing may interrupt it in its course I shut out every obstacle, every extraneous idea, I stop my ears and inhibit all attention against the sound from the next room. And then, feeling that my mind is tiring itself without having any success to report, I compel it for a change to enjoy the distraction which I have just denied it, to think of other things, to rest refresh itself before making a final effort. And then for the second time I clear an empty space in front of it; I place in position before my mind’s eye the still recent taste of that first mouthful, and I feel something start within me, something that leaves its resting-place and attempts to rise, something that has been embedded like an anchor at a great depth; I do not know yet what it is, but I can feel it mounting slowly; I can measure the resistance, I can hear the echo of great spaces traversed.

Undoubtedly what is thus palpitating in the depths of my being must be the image, the visual memory which, being linked to that taste, is trying to follow it into my conscious mind. But its struggles are too far off, too confused and chaotic; scarcely can I perceive the neutral glow into which the elusive whirling medley of stirred-up colours is fused, and I cannot distinguish its form, cannot invite it, as the one possible interpreter, to translate for me the evidence of its contemporary, its inseparable paramour, the taste, cannot ask it to inform me what special circumstance is in question, from what period in my past life.

Will it ultimately reach the clear surface of my consciousness, this memory, this old, dead moment which the magnetism of an identical moment has traveled so far to importune, to disturb, to raise up out of the very depths of my being? I cannot tell. Now I feel nothing; it has stopped, has perhaps sunk back into its darkness, from which who can say whether it will ever rise again? Ten times over I must essay the task, must lean down over the abyss. And each time the cowardice that deters us from every difficult task, every important enterprise, has urged me to leave the thing alone, to drink my tea and to think merely of the worries of to-day and my hopes for to-morrow, which can be brooded over painlessly.

And suddenly the memory revealed itself. The taste was that of the little piece of madeleine which on Sunday mornings at Combray (because on those mornings I did not go out before mass), when I went to say good morning to her in her bedroom , my aunt Léonie used to give me, dipping it first in her own cup of tea or tisane. The sight of the little madeleine had recalled nothing to my mind before I tasted it; perhaps because I had so often seen such things in the meantime, without tasting them, on the trays in pastry-cooks’ windows, that their image had dissociated itself from those Combray days to take its place among others more recent; perhaps because of those memories, so long abandoned and put out of mind, nothing now survived, everything was scattered; the shapes of things, including that of the little scallop-shell of pastry, so richly sensual under its severe, religious folds, were either obliterated or had been so long dormant as to have lost the power of expansion which would have allowed them to resume their place in my consciousness. But when from a long-distant past nothing subsists, after the people are dead, after the things are broken and scattered, taste and smell alone, more fragile but more enduring, more unsubstantial, more persistent, more faithful, remain poised a long time, like souls, remembering, waiting, hoping, amid the ruins of all the rest; and bear unflinchingly, in the tiny and almost impalpable drop of their essence, the vast structure of recollection.

And as soon as I had recognized the taste of the piece of madeleine soaked in her decoction of lime-blossom which my aunt used to give me (although I did not yet know and must long postpone the discovery of why this memory made me so happy) immediately the old grey house upon the street, where her room was, rose up like a stage set to attach itself to the little pavilion opening on to the garden which had been built out behind it for my parents (the isolated segment which until that moment had been all that I could see); and with the house the town, from morning to night and in all weathers, the Square where I used to be sent before lunch, the streets along which I used to run errands, the country roads we took when it was fine. And as in the game wherein the Japanese amuse themselves by filling a porcelain bowl with water and steeping in it little pieces of paper which until then are without character or form, but, the moment they become wet, stretch and twist and take on colour and distinctive shape, become flowers or houses or people, solid and recognizable, so in that moment all the flowers in our garden and in M. Swann’s park, and the water-lilies on the Vivonne and the good folk of the village and their little dwellings and the parish church and the whole of Combray and its surroundings, taking shape and solidity, sprang into being, town and gardens alike, from my cup of tea.

The “Episode of the Madeleine”, extracted from here

It’s a long novel which may be vaguely boring if you’re not into literary modernism, but nevertheless I enjoyed this excerpt, which I first saw in the menu of a random cafe I wandered into.

The entire book, and especially this segment, is focused on the theme of involuntary (Proustian) memory. Though it’s not really related to the task at hand, thinking of food and memory reminded me of this passage. Having a memorable scent is somewhat related to Proustian memory, since it’s about being able to evoke a memory without conscious effort. In fact, allegedly, the ‘expression “Proust’s madeleine” is still used today to refer to a sensory cue that triggers a memory’ (The Guardian). It’s not as related to actually translating the scent to a shape, though.

There’s also another copy of the excerpt here, this time with 2 extra paragraphs in front. I find it more charming without, but those 2 paragraphs provide a brief summary of sorts.

One thought on “(Excerpt) In Search of Lost Time”