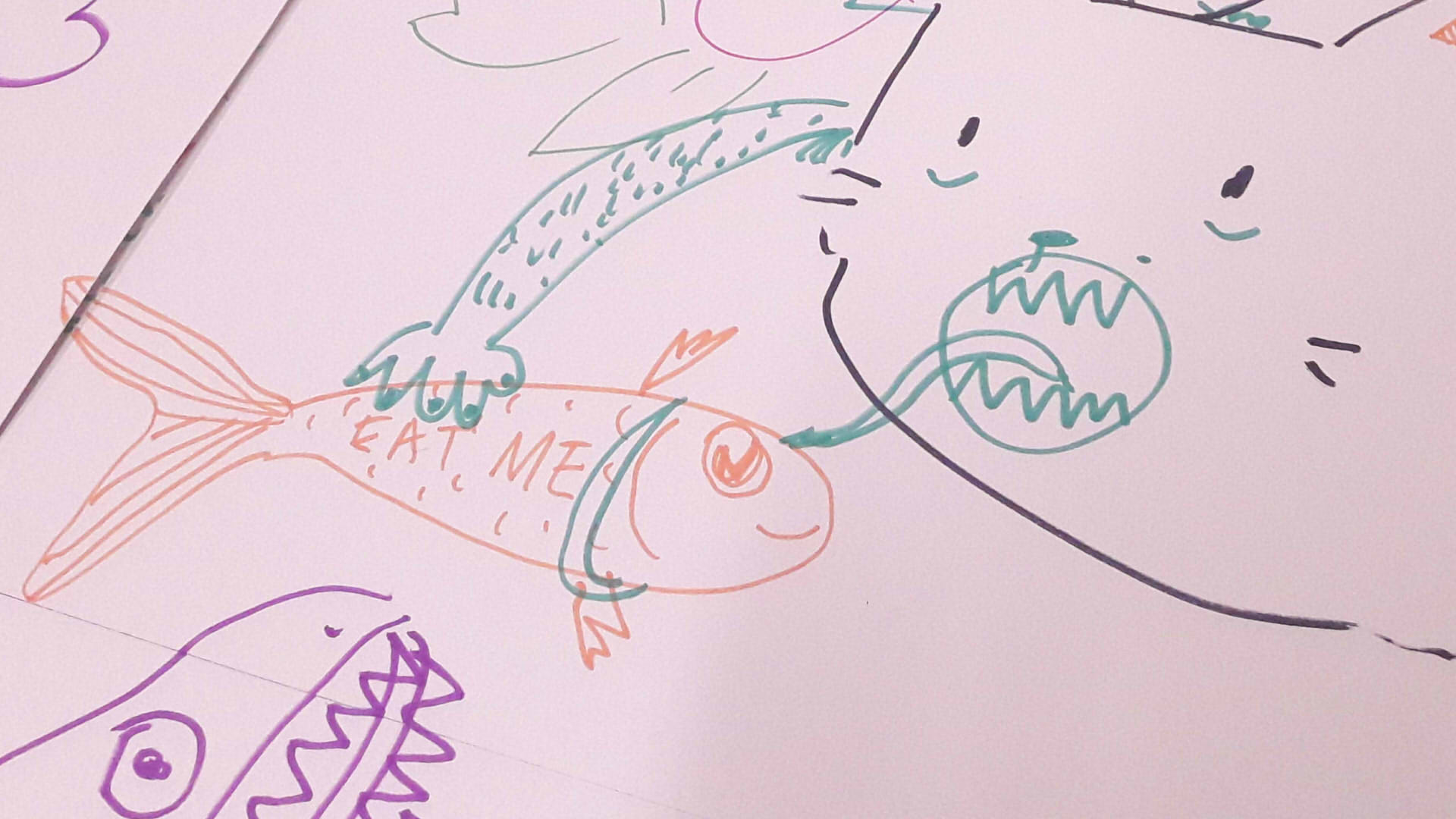 I decided to switch up and get out of my comfort zone by working with live, 3-dimensional, interactive things than what I’m comfortable with (read: drawing, animation, painting, etc), and it’s been a real eye opener. Mostly because my soul is broken.

Since I had been steadily and extensively working on my original plan until it had to be drastically changed 1 day before the presentation, I’ll attach both the original plan (here, in Part 1) and last-minute improvised plan (in Part 2). As this project was more trial and error process-based in terms of setup, there’ll be less summarised points as opposed to talk on the setup process.

For me, I have a difficult time working with anything that’s 3-dimensional in nature simply because I have difficulty noticing or controlling problems (i.e. anything technical, physical, etc). For the sake of learning, though, I decided to at least have a go, so rather than an emphasis on laborious handiwork like animation, I’d have a simpler subject, but with a more complex setup process (see more in my post on the Blue Sail, which was sort of what I was trying to emulate).

The difficulty is elevated by that the available spaces in ADM tend not to be exhibition areas specially catered for presentations, and as such I’d have to improvise greatly, and the setup would vary rather wildly depending on where I choose.

My concept was based around the philosophical antipodes of endurantism and perdurantism. It’s a relatively new concept to me as well, but to sum it up (I also made little placards of this to put up):

I originally considered having an opinion which leans towards either, but realised that

Hence, I decided to just try and present it as best as I could, and let people just learn about it, form opinions on their own if they want to. In fear that I wouldn’t be able to explain properly, or that people wouldn’t get it, though, I made little placards of sorts so people could read it on their own, or maybe better understand through images than me talking.

Here’s some references which I looked at to actually understand anything.

The idea of a 3-dimensional object instantly came to mind, where the concept already revolves around metaphysics and the material world (I will use the word “chair” to describe this object, since it was the first thing that came to mind for me).

To try to create a tangible difference where there was no tangible difference, however, was difficult. The general gist was to use different mediums to bring across the idea, and these were some things I considered to show the idea of temporal parts, and how the chair is interacted with across time, giving it an identity beyond what is currently seen, or the idea of the static, singular moment that the chair exists within.

I eventually decided on a video and live transmission, where the video would show another part of the chair’s identity through edited time, where one can see that the chair before them is only a part of what it is, has been, and will be. The live transmission, on the other hand, would show the entirety of the chair’s identity through real time, where it only exists as it is right now, in that very moment.

I also decided to go with a 4 by 3 aspect ratio such that it would focus more on the object than its surroundings.

Also, here’s a test of the live transmission. I decided to use fullscreenmirror.com because I couldn’t full screen the inbuilt camera for Windows 10, though it comes with the downside of having a social media sharing toolbar which can’t be disabled. (I also later learned that the school-loaned projector has an option to flip the display, so mirroring won’t be an issue!)

Next, I considered the object in relation to location. Since I had originally envisioned a chair, I went out looking for identical chairs in close proximity to each other in ADM. The general idea, though, was that the object just needed to be something people could interact with, to make it more interesting, and also such that the object could be “modified” across time as people fiddled with it. Preferably, though, it would have to be something immovable, so that the projection and object would still align properly.

I eventually decided on the Basement Foyer (outside the Foundation 3D room), because I noticed the benches there fit the aforementioned criteria. Also, it has a thriving nightlife, where ADM freshmen doing their homework tend to gather there, which gave the benches a special, time-based identity part.

I also took a test video, and quickly discovered my SD card was too inferior to take videos longer than 12 minutes. Lei suggested to just cut it to 10 minutes, which was probably a good idea since it was more than enough to get the idea across. Here’s a sample from 9pm during final project hell week, also edited to 4:3 aspect ratio.

Luckily, I had enough common sense to notice that my laptop required some form of adaptor to fit the cable. Also, I checked the projector specifications from the school’s equipment store, and discovered it only serves VGA, and no HDMI: as such, I was adequately prepared to look around for ways to counter that, eventually settling on:

Since my installation involved digital projections, I also looked out for sockets. It’s rather startling to know that there’s only 2 sockets in this entire area.

Consequently, I drew up a sketch of the setup. It might seem like all I really need are 2 laptops and 2 projectors, but the drawing really helped me to realise that I would need a lot more accessories to address more technical and spatial problems:

The dry run also assisted in realising that

And with all the problems solved, I was ready for the day itself! Or so it seems….

TO BE CONTINUED although part 2 is already up, so