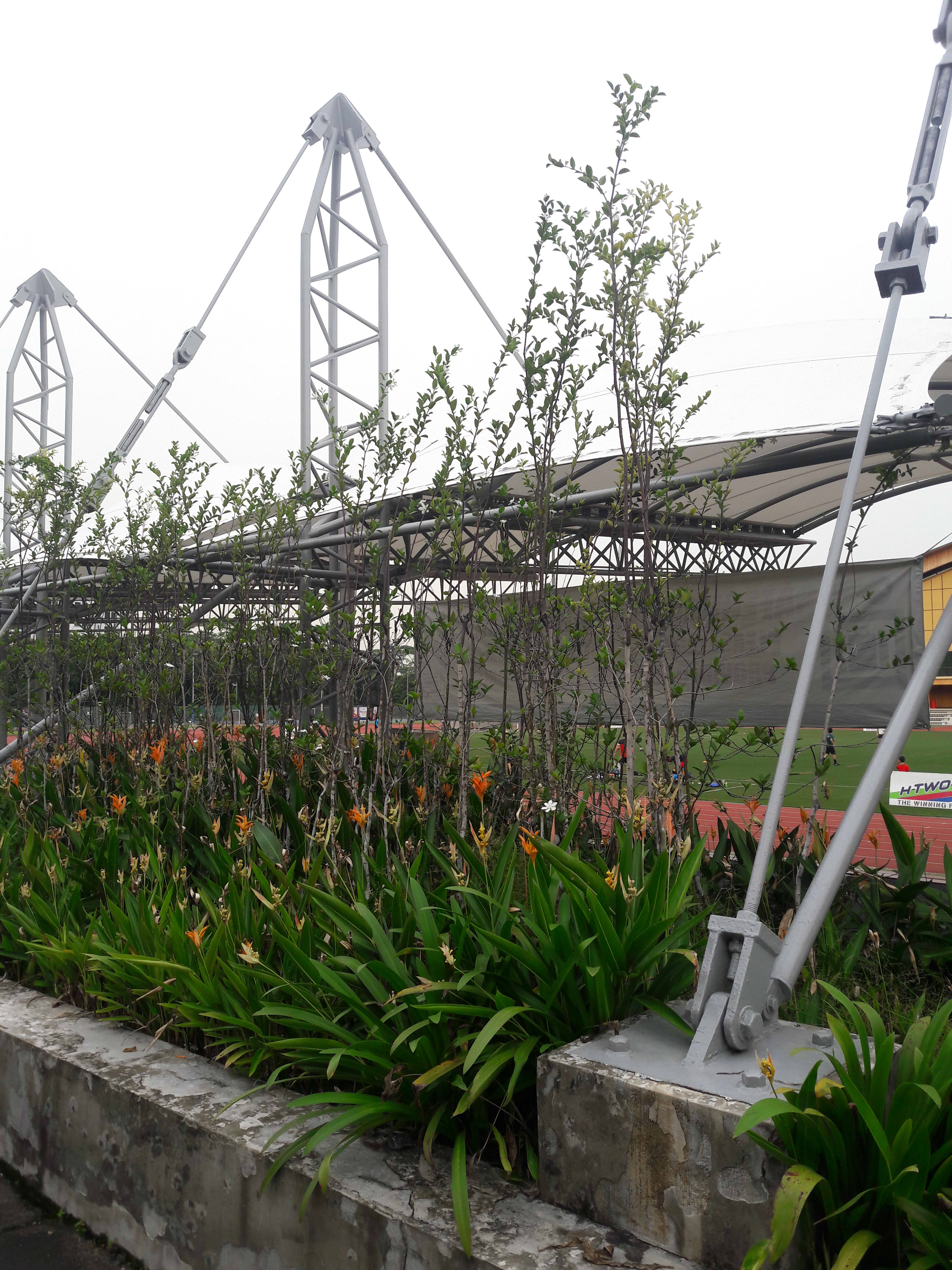 I realised I forgot to ever publish the posts, ha..ha… So here I am! As usual, initial models are here, and the final model was based on Model 1. 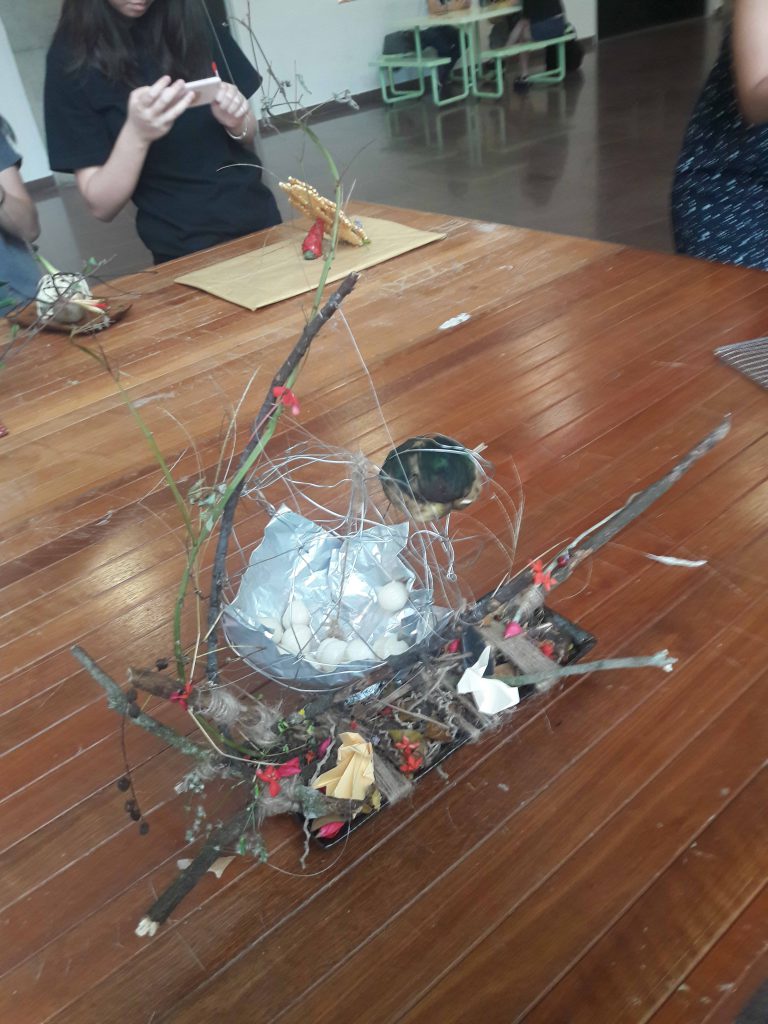 Before beginning, I took a look at my hoard of mostly-useless trivia in exploring Autumn:

Other things I learnt by Google:

Firstly, I opted to go for Model 1 simply because I already had another idea in mind for Model 2 which wouldn’t fit well, and I couldn’t see myself changing what I felt Model 2 should become. Also, Model 3 was just not interesting to me. So Model 1 it was!

I decided to focus on o-tsukimi (お月見), the Japanese Mid-Autumn Festival, so that I could bring in food as opposed to just plant material. Overall, though, I wanted it to look like some sort of lantern/moon/boat thing, with a nice curve arching over and enclosing a rounded, glimmery circle. 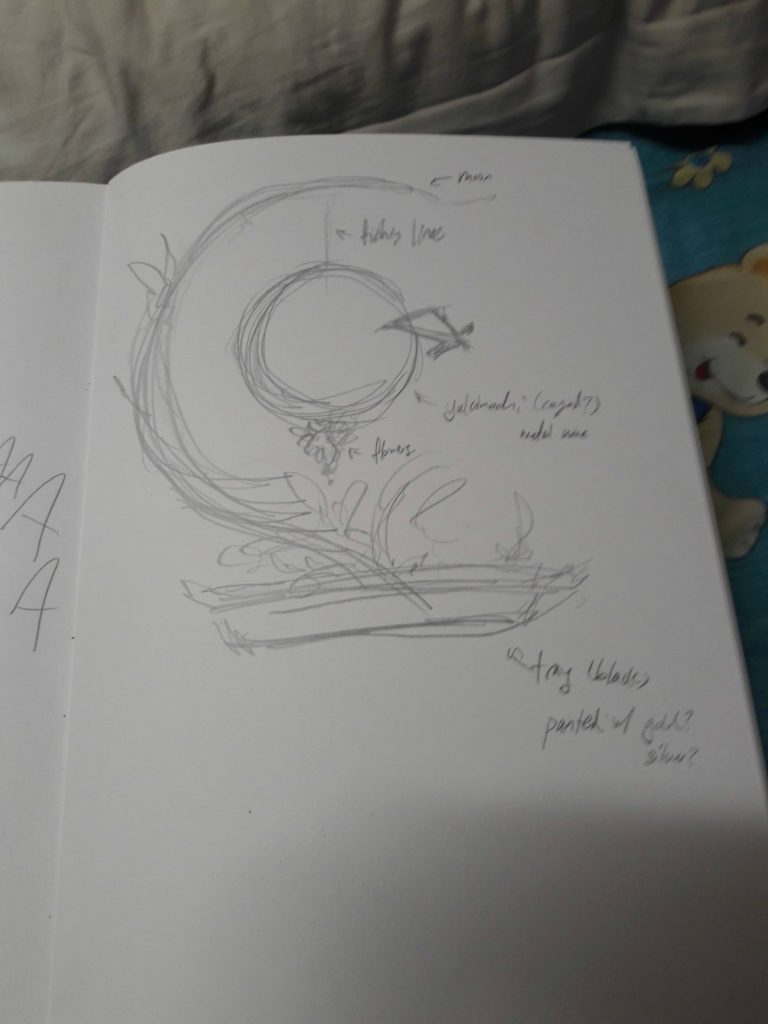 Also, supplementary material as to the kind of feelings I wanted to imbue. I meant the choral version, but I can’t find any videos!

I wanted a giant mochi, but quickly realised there was no way that was happening. To compromise, I initially intended to have some sort of structure  around the mochi to suggest some kind of extrapolation.

As it went on, though, I realised a pun even more glorious than that of the yakimochi. mochi = to hold, mochi = rice cake, so it could be just be something to hold mochi, a mochi mochi. And thus, I did so.

I just couldn’t really think of any autumn foods which were naturally conical which wouldn’t look completely out of place, so I opted to just cut the sweet potato to shape. This took a little bit of cooking sense, because I forgot that it’s not really possible to cut raw sweet potatoes. I also had to cut it from 3 different sweet potatoes because sweet potatos just don’t grow big enough to have a single piece.

I then used toothpicks and satay sticks to help attach the pieces together and form the hole for the soumen piercing.

As aforementioned, soumen represents the Milky Way, important in stories with the moon. I’m mostly sure that’s just soba, though. In my defense, actual white noodles was kind of glaring in all the wrong ways, so I consciously decided to go with the duller but more natural-coloured soba.

For the base, I was already envisioning a shallow, basin like, long and slim tray. Preferably with that one bunny-wheat-moon-mochi design.

I just got a normal Japanese plate in the end.

I wanted to bend it into the arch! I really did! I borrowed my roommate’s hairdryer and everything!

In the end, I decided that if I couldn’t bend it, I could only join branches together to give me the shape I needed. I’m not in possession of a hot glue gun or anything useful like that (and I wasn’t sure if it would make the structure look undesirably unnatural), so I opted to go with a more… Traditional method. (It’s fortunate that I spent 4 years learning this as a cadet.)

I then used a whipping knot to lash the branch to the plate. 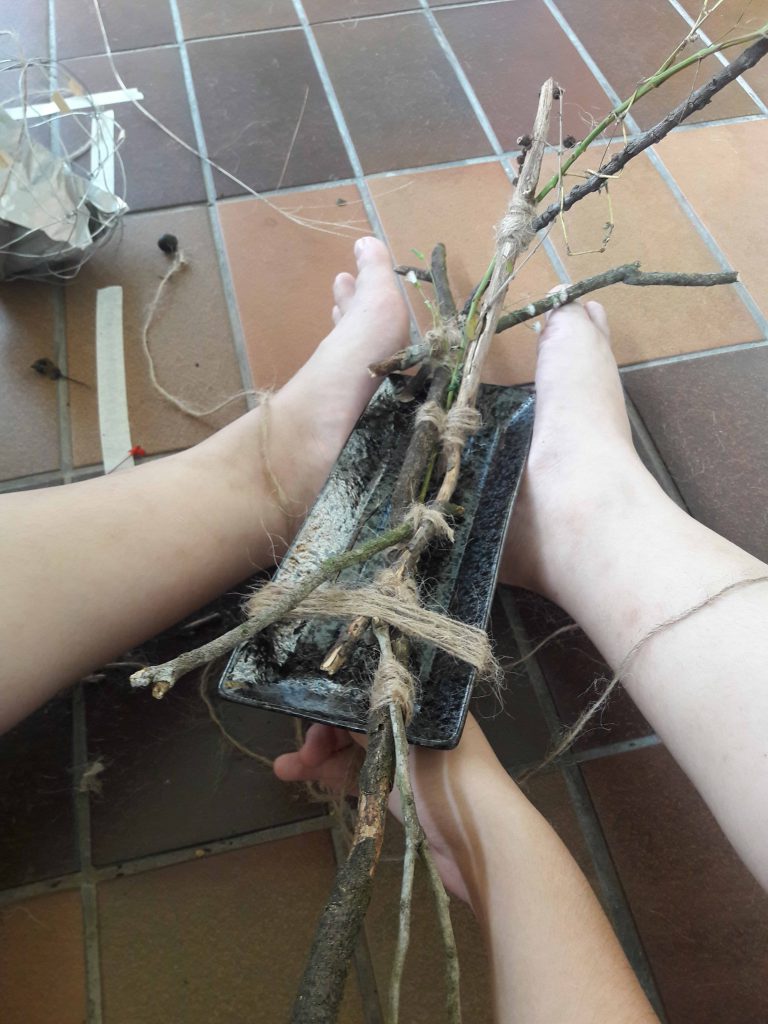 ALL THE OTHER PLANTS

As you can see above, it doesn’t look very nice, so I decided to just add a carpet of fallen leaves/flowers/etc to conceal it. Also because autumn is a lot about wilting plants all over the ground (crunching through leaves, perhaps?).

Aki no nanakusa clearly suggests something about autumn, which is that of a lack of flamboyant and prominent plants as opposed to wild weeds, so I went and did exactly that: I plucked fairly inconspicuous plants/fruits/flowers around Hall 2 and the SRC. I went for reds, oranges, browns, obviously. Also, some of those weeds which look vaguely like stalks of wheat.

Then I also just picked up a lot of dead leaves lying around.

When interlacing with the model, I didn’t use anything but natural forces such as gravity, and just wedging plants into cavities to hold them in place.

I considered folding paper crysanthemums, but decided against it since it didn’t really fit the idea of wild and minor plants.

To end things off, here’s a picture from while I was working outside my room.