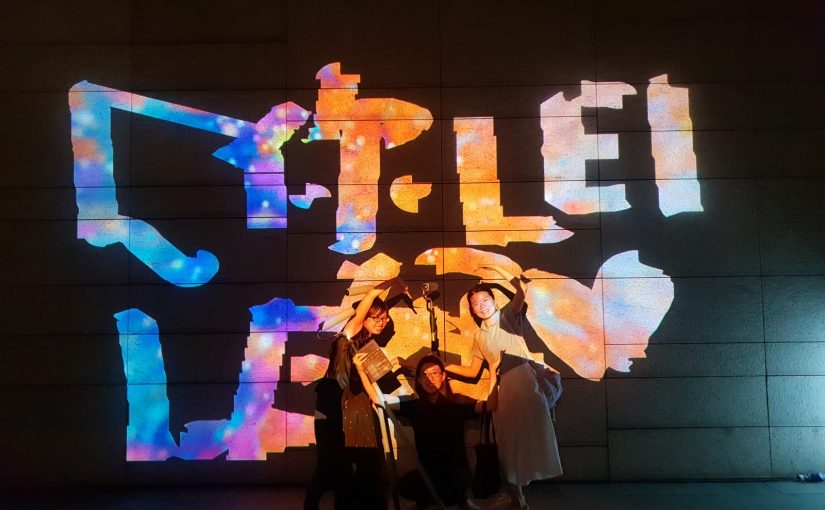 Somebody once told me that humans are biologically engineered to instinctively look out for moving images and flashing lights. Seeing how easily we were distracted at i Light Singapore, he was probably right.

Shades of Temporality is easily one of the more interesting works presented. An homage to street art, it invites the audience to participate by painting onto the wall. The digital twist is that said paint is a video which only reveals itself when the roller detects that it is currently in the process of “painting”.

Interestingly, SWEATSHOPPE sees a much more philosophical meaning to their artwork. As the name suggests, it addresses the issue of temporality, where they are attempting to consider multiple layers of time: the experienced time of a participant’s creation of a canvas, and the edited time of a canvas moving separately from the painter.

This is a conclusion supported by both related articles and visible limitations, as evidenced by when we tried it out ourselves:

As can be seen in the video,

Something much lower down the continuum of interactivity might be Shadow Exposed, which lacks both a feedback and database system.

Like Shades of Temporality, Shadow Exposed is verily concerned with the nature of projection, though the focus is more on its relation with movement and light. There is an added layer of artist interest in attempting to let video “interact with the physical world”: in this case, by letting participants project their shadows against a backdrop of light and historical architecture.

Already, deviations from the sensor-based interactive artwork are evident.

My only conclusion is that the fundamental issue lay with that, while technology was involved, the interactive segment took on a fairly traditional form. If I were to make a comparison, it would be with the way a primary schooler might do shadow puppetry with a classroom projector.

While the description might lead one to believe that the video feed changes when it detects your presence, it was a constant image which varied only in terms of shadow and light, which requires no programs whatsoever as opposed to sheer physics. Is this an issue in relation to the ultimate message? Perhaps not, but it does compromise the interactivity, where this is a comparatively passive piece.

It is here that I wish to make a declaration, that a more precise lexicon may need to be established when speaking about interactive media. The term ‘interactive’ was used liberally to mean anything from emotional connection to talking with each other. Which isn’t necessarily wrong, but makes things rather difficult, if we wish to discuss certain types, such as sensor-based interactivity.

The question of how to identify interactive art also seems relevant here, where it is in hindsight that I realise that we had walked by this installation. (In my defense, there were many actual buoys with lights on. That is a very ordinary function of buoys. There was no reason to think otherwise.)

Then again, there is something rather endearing about a world in which interactive media has been assimilated into everyday life.

Going together with Elizabeth and Christine also led to an epiphany I might never have had otherwise: All the works were exceedingly founded on the assumption of being alone. That is not to say that it was required to only have 1 participant, of course, but that the involvement of additional participants was rarely, if ever, necessary. I find that to be a rather dismal state of affairs, considering that a majority of people would likely be coming in groups as tourists, families, colleagues… In other words, it may be worthwhile to have more interactive artworks which are founded on the assumption of companionship.

Also, surprise! DUNE, which I previously wrote about, landed here.

All other media was taken personally, with the exclusion of ones in which I appear, which are taken by staff member(s).