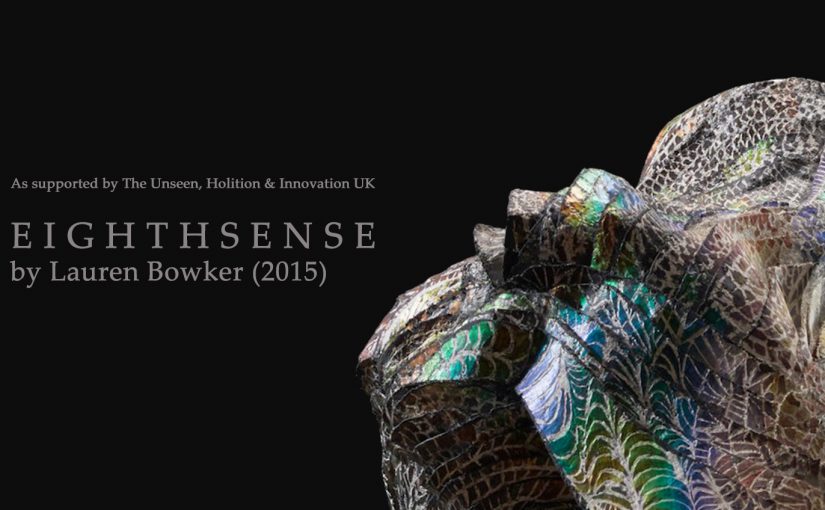 A medium which spans across several disciplines, clothing simultaneously engages the visual senses of others and the tactile sense of the wearer. In more recent times, technology and fashion have converged to form “wearable technology”, ranging from new design techniques to new textiles.

As a fashion design house, The Unseen is no different. Certainly, their designs are tailored towards essentials like visual pleasantry or tactile comfort. As a material innovation house, however, founder Lauren Bowker argues that it goes beyond that. They are “creating items that allow us to explore more about our lives and the environment in which we live,” she claims.

LAUREN BOWKER, THE UNSEEN AND THEIR KEY FEATURES

A self-proclaimed material alchemist, Bowker is a prime example of the convergence of art and technology. Her expertise in the fields of chemistry and textiles allows her to meld the two to create new textiles supported by chemical reactions. Through The Unseen, she has also begun to delve into digital software to detect said factor and create reactions, than just chemical compounds.

In 2012, Bowker founded The Unseen to further pursue her interest in interactive textiles. A famous story is of how she fell sick while studying textiles, and had the epiphany that she desired the creation of textiles with “more meaning“. In simpler terms, textiles which can provide insights into issues like the physical and mental wellbeing of the wearer, or the characteristics of the surrounding environment (heat, wind, pollution, among others).

INTEREST IN THE PARTICIPANT, AND ITS EFFECT ON THE EXISTENCE OF EIGHTHSENSE AS INTERACTIVE ART

We see the culmination of this interest in the wearer’s condition in the interactivity of EIGHTHSENSE. Developed by The Unseen, it received assistance from partners Holition and Innovate UK.

Described as a “coded couture” piece, EighthSense is, simply put, a wearable ceramic sculpture which changes patterns of colour based on the emotional aura of the wearer.

While “couture” refers to its existence as an exclusive fashion piece, “coded” refers to the way in which the design functions: the smart textile is coded to analyse electromagnetic waves generated naturally by the wearer. This will later be essential in understanding EighthSense’s status as an interactive artwork.

As established in Cybernetics in History and Behavioural Art and the Cybernetic Vision, interactivity is mainly determined by the presence of complex actions and behavioural art.

Furthermore, this reflection of emotional status can only occur through the use of something to execute complex actions, where that something is the use of technology in art. A complex action is defined as the action system by which the input will lead to an output, often through deliberately routing than direct causation. As shown through the video, without input, the artwork is static and grey. With varying inputs in the form of biological signals, then, comes varying patterns of colour.

This provides structure through the existence of algorithms which continuously receives biological signals as feedback from the wearer. Since the objective is to reflect the wearer’s emotional status, the garment will constantly check said data, and change colour accordingly. By extension, this structure assists in staving off entropy, where entropy is defined as the possibility of “disorganisation in [information] transit”. As long as you have some knowledge of what inputs lead to what outputs, the awareness of the antecedent (emotional status) will allow you to deduce the consequent (garment colour), and vice versa.

CONVERGENCE OF TECHNOLOGY AND DESIGN, AND ITS EFFECT ON THE EXISTENCE OF EIGHTHSENSE AS IMMERSIVE & INTERACTIVE HYPERMEDIA

On the more technical side, a semblance of entropy can, regardless, still be maintained due to how the technology allows for infinite possibilities as to the form of the artwork. This is due to 1) the tessellation of pixels to build up the sculpture, and 2) the existence of multiple hues and tones, such that the colour culmination will never be exactly the same.

From this graphic, we can also see that EighthSense has inadvertently crossed into the realm of hypermedia, according to As We May Think, where the criteria primarily revolves around non-linearity and multimedia.

EighthSense is able to have a non-linear method of information organisation because of its dedication to tackling emotion in relation to colour. In this artwork, emotion and colour are linked not by artificial and linear methods like alphabetical order, but by a non-linear method: colour psychology. This is a distinctly human construct which relies entirely on how the human brain creates association. For example, one might categorise ‘fury’ and ‘irritation’ together as subsets of ‘anger’, than have them all on the same hierarchy level. It is not improbable, though, that it is simply that they generate similar electro-physiological data, and thus generate similar colours as outputs.

Furthermore, the medium of and technology behind EighthSense causes it to be considered interactive multimedia as well. The garment exists in the domains of many types of media: the visual image of the wearable, the animation of the ever-changing colour and the interactivity of the emotional input.

Many of its features also provide EighthSense with a reasonable amount of immersive quality. Immersion, as per Sutherland’s The Ultimate Display, involves the usage of appropriate input systems and interfaces to increase familiarity of control. Virtual Environments expands on Sutherland’s ideas, in suggesting engagement of some, if not all, senses, as a way to duplicate and extend reality.

Once again, the medium of and technology behind the garment allows it to cater to various senses. The wearable itself engages the tactile sense of experiencing the flexible ceramic against skin. The form of the wearable engages the visual sense of experiencing what the artwork looks like. In addition, there is emotional engagement in the form of emotions directing the outcome of the garment, which increases the level of immersion.

However, the headset is a somewhat disappointing input system, where it is neither intuitive nor immersive: should it not come from the garment, instead of an external factor? Would it not have been better to design a hat instead of having to wear extra items?

However, it is also important to note that EighthSense is incredibly successful at extending reality through technology in a way plausible enough for us to suspend belief: the manifestation of emotions on clothes. As intangible emotion is closely tied to tangible colour, we see that the notion of colour changing to match emotion can be smoothly integrated into textile design. Thus, it is able to be immersive enough to prevent disassociation.

It is not a travesty to assert that Bowker’s claim of exploring the wearer and their surroundings is true. Certainly, The Unseen has accomplished that in an astounding manner, where the garment’s interactivity elegantly detects, analyses and visualises the wearer’s aura.

The Unseen’s signature style of combining design and technology also shines, and unintentionally brings the artwork into the realm of hypermedia through the natural information categorisation and multimedia form. Of course, the immersion level could be better: it is simply bizarre to think that it is not necessary to wear the garment at all, since the input comes from elsewhere.

Regardless, EighthSense and The Unseen represent a positive step towards assimilating interactive technology in everyday life, and I am confident that this can and will be a future trend in fashion.

Please note that hyperlinks have been included in the hyperessay for definitions and quotes.

Additionally, image sources can be found by clicking on each image, which will redirect you to the original website. (Images for Graphic 1 from here and here, and featured image from here)

The dress that changes colour with your emotions. On BBC News. (link).