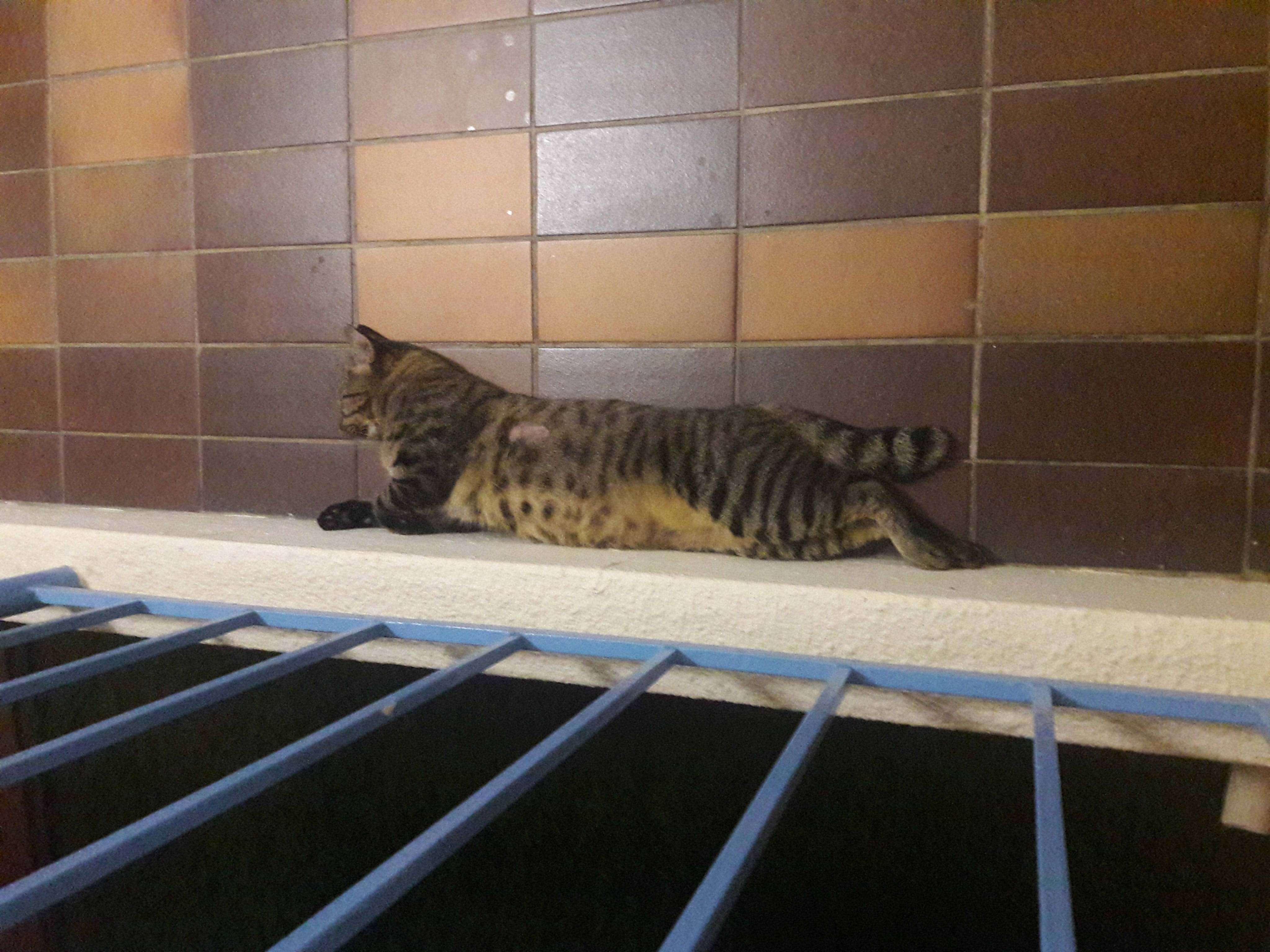 While I originally contemplated movies of different genres, I eventually decided on Japanese animated youth drama films just to have some form of unity. All in all, though, my works follow a more chronological sequence, in that I learned various lessons along the way on techniques (mostly by discreetly looking at other poeple’s stuff and Googling “surrealism”), and tried many different things along the way: those which worked reappeared in later pieces, and those which didn’t were eliminated. 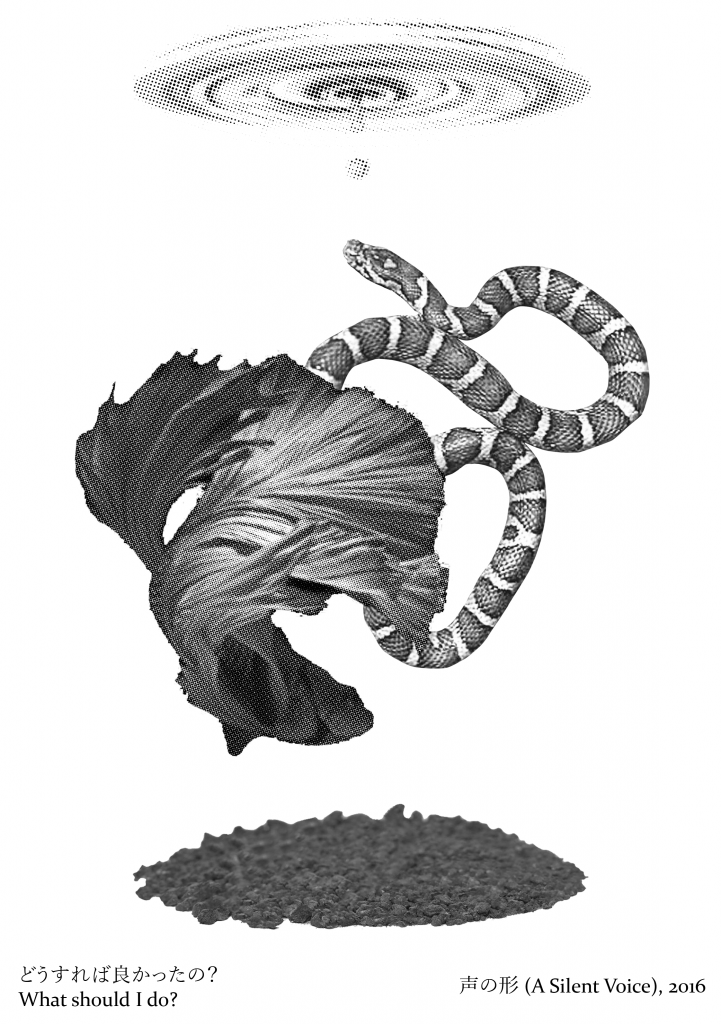 Summary: A sense of helplessness in not knowing what to do, mixed with hope for the better. Both animals often appear in intertwining pairs, where the downward-swimming fish symbolises the involution of the spirit, the snake, the succumb to venomous depravity. Yet, while the fish dives towards the soiled earth, the clarity of heaven still drips as a form of hope that things can improve.

This was the first one I started on, and probably one of the more experimented-on ones as a result.

ver1.0 was the original, and already had some element of the dichotomy I was trying to present. The earth was much more cluttered, with various things which are common sources of anxiety (e.g. clock=time, heart=relationships). Mathematical statements (all with no solutions) were clipped on to try and further that idea. ver0.9 didn’t have the stroke around the fishes/snakes, but it was added when Joy mentioned that the focus wasn’t clear enough. The common consensus was that too much was happening, and looking at the others during the group consultation also made me realise that I didn’t really consider the borders. Also, a perfunctory look at surrealist artists made me reconsider the usage of a meaningful background with a meaningful foreground, mostly because blue cloudy skies seemed to be quite a common theme to diminish the background and bring out the foreground.

From ver2.0 onwards, the background of human figures (to suggest uncertainty on what to do) was omitted, and I tried to focus on using shapes with clear directional outlines. Little variation happened between ver2.0 and ver2.7 in the general shape of the intertwining fish and snake to suggest a balance between 2 elements. ver2.5 is a sad remnant of when I was attempting to incorporate basic shapes to unify and differentiate my 4 pieces. But I couldn’t make it work, so I gave up (that’s both a Celtic cross and a coda, incidentally). Dhanu suggested to make everything line up though, so I figured might as well! (Also, I half-toned one half to try and contrast more.) 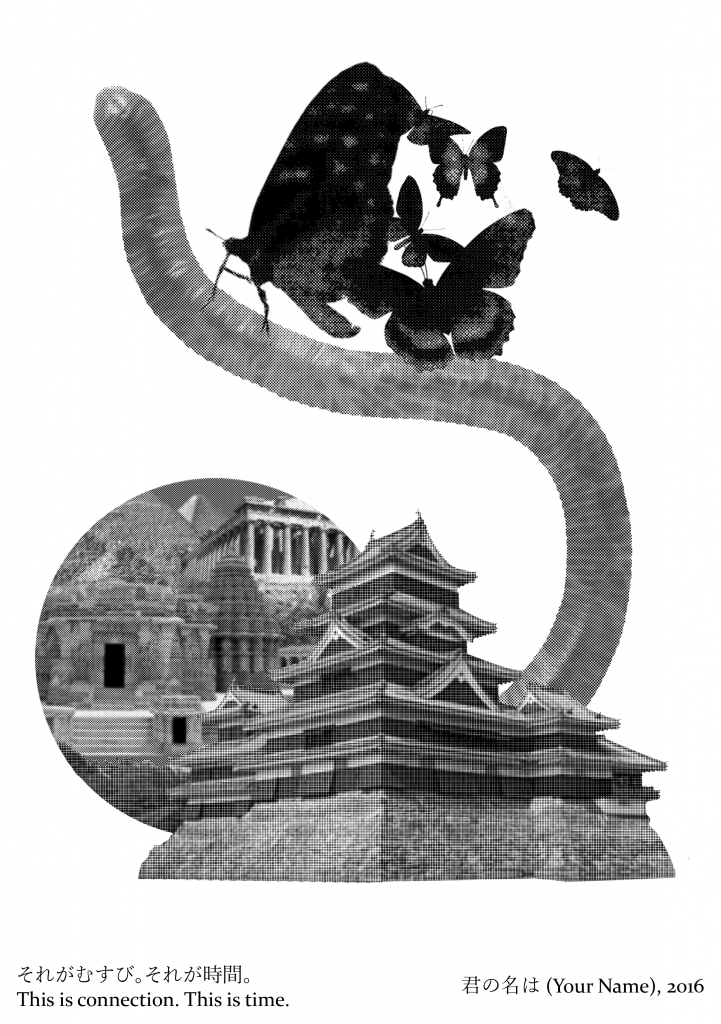 Summary: Even if our bodies decay, our existence is connected to the world for all time and space simply because we once were. The worm destroys and remakes our bodies to rejuvenate the earth, rising over the time and space of different parts of the world in different eras. Butterflies come from the worm, representing the choices one makes in his life through the idea of the butterfly effect.

This was the second I worked on, and was also vaguely annoying (but not as much because I hadn’t put the same amount of intricacy as for the first).

ver1.0 was also a remnant of my attempt to use basic shapes. I wanted that posture more than any possible meaning associated with the statue, but I eventually figured there was really little purpose in putting a human figure and it wasn’t subtle enough. Also, Joy mentioned that half-toning distorted the background and made it difficult to make out details, which I later tried to resolve by using different half-tone settings and taking at least one building out in its full glory. (There’s also the stroke, which was again an attempt to draw focus. I later learn that this is not a great way of defining focus, but that’ll be for later.)

ver2.0 onwards is all very similar, but with the figure swapped for the worm. This is also due to the earlier realisation that using the shape of the object to provide definition was good. The worm was originally cracked to suggest the breaking of the body, but Joy mentioned that it made the worm very unwormlike, and thus I toned it down (to the point of omission). I also just scaled down the buildings and darkened the butterflies with Threshold to try and define the focus more, although the eventual result still wasn’t sufficient, it seems. (I DID learn that Threshold was very useful for creating focus, though, which I applied in small amounts.) 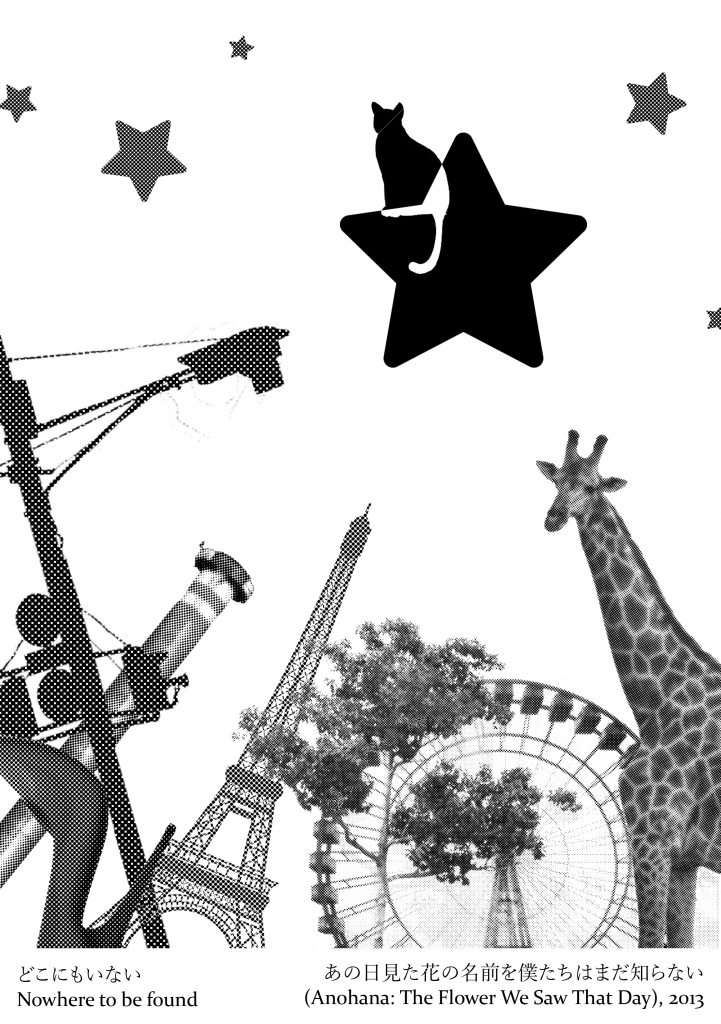 Summary: If your cat is missing, it could just be that it’s among the stars.

This was really the easiest of them all, somehow. I think it was the simplicity of the narrative, added with the fact that I don’t really have any particular emotion towards the quote that made me particularly want to show anything. 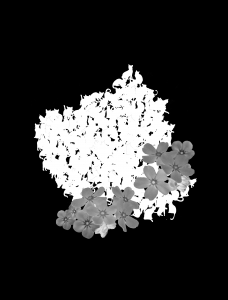 Halfway through making this, it was gently rejected, but I just wanted to finish it anyway because it was cute. This was also my first attempt at intentional and overdone implied lines, and absolute use of half-tones to slightly blur everything that isn’t the focus (and binary colour for the focus). The final comment was that the star on the side looked uncomfortably cut off. It was supposed to be slightly out of the frame, but perhaps I should have moved it in a little more to make it look more intentional. Summary: To be stripped of your voice is like becoming absent, and for everyone to be happy means that everyone despises you and wishes you don’t exist. The body is fading away, the skeletal spine suggesting decay while the head, the location of your mouth, is replaced by the ink splattered paper. That the paper is shredded and blotched indicates that your words can’t reach anyone, while the scissors represent people who all despise you, their blades pointed at you. Also, there are various scissors to suggest all kinds of people.

This was a headache in that it was the quote I resonated the most with, and thus the quote I was most trapped by, because there was a feeling I really wanted to bring across, but I didn’t want work to be defined by my personal feelings because that always makes it hard on everyone. In the end, I couldn’t make anything satisfactory, so I gave up and went with my feelings.

ver0.2 and ver0.4 don’t even get to 1.0 simply because it wasn’t much of a composition as opposed to a cluster of ideas. Again, the triangle was an attempt at basic shapes, with the ink splatters meant to suggest blood and hurt. The scrabble tiles was a link to the idea of “voice” again, an attempt at breaking the regular rhythm to create focus. The focus would then be letters which form words with multiple meanings/multiple words: in this case, L I V E / E V I L (I couldn’t think of anything better, so I ended up giving up on this one). The pierrot was an attempt to link that to emotion, where the clown lets himself be ridiculed, to the happiness of others (it was an idea from a song). But, again, I generally dislike directly representing human faces in surrealism so I axed it.

ver1.0 was me deciding to go with the ink splatters as the most aesthetically pleasing (and gut feel appealing) to me, and trying to go with the idea of paper as a representation of the voice and feelings. It’s the same as for the final, where wrecked paper = failure to communicate, but now revolving around ideas linked to paper, such as that of stationery (the scissors) to represent “everyone” and the idea of injury infliction (because scissors is sharp. and wins paper). The comment from Joy was that it was too abstract, though, so… Against my better judgment, I linked it back to personal feelings such that it became a human figure. Also, I reduced it to a single paper because many of my previous pieces had problems with “overdoing it”, and I figured 1 paper was enough. Similar to the 3rd piece, I used halftones, and tried to use white to define the focus: consequently, everything else consists of darker shades of grey.

What annoyed me most for this project was the number of minor issues I didn’t even think would be issues being issues. A splatter (pastel?) I can’t even recognise appeared on my bag on Sunday night and no amount of detergent nor scrubbing could get it off, I decided to print at home because my 4th composition still needed work even on Friday but my printer evidently cannot print tones of black properly, and printed all my pieces slanted so I had to use the paper cutter to adjust the sides, then the paper cutter kept cutting off little corners/didn’t cut perfectly to the edge. Learning from my previous mistake of being slightly late, I woke up at 4am to prepare everything properly, but it still didn’t work out, miraculously. I’m not sure what to make of this, because it could be me being an utter failure, or just rotten luck.

Something interesting that was mentioned was from Brendan, that there was a lot of animal imagery. I hadn’t even thought about it, and I suppose if I had I would have tried to link the 4th composition too. A human figure may have been good in that humans are considered the only species capable of “thought”, and thus that form of paranoid anxiety, but perhaps something like a fly (I can’t remember the exact one, but there’re quite a few poems about killing flies and the poet’s feelings towards the act) might have been interesting to work with.