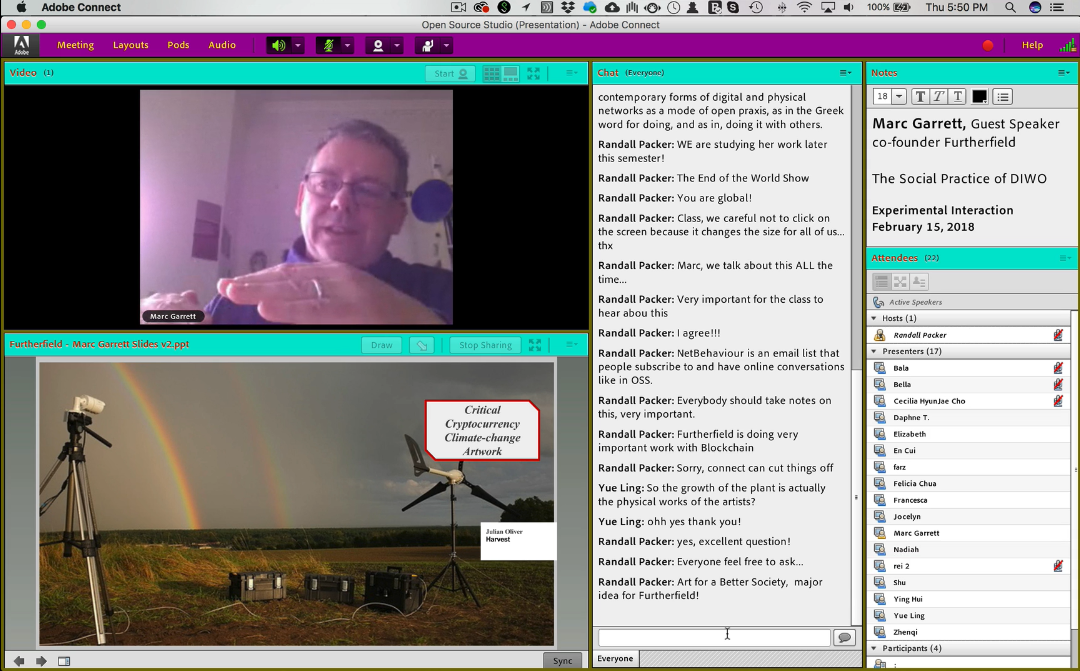 Do It With Others—The name says it all. To give due credit, DIWO is essentially the overarching theme guiding our lesson objectives. It makes sense: with a title like Experimental Interaction, it’s certainly most important to focus on, you guessed it! Interaction, especially those experimental in nature, which is what DIWO is really all about.

Furtherfield, an art community, is the proponent of this collaborative approach. It is in itself a revolutionary organisation heavily concerned with “collaboration and experimentation”, contrasting traditional perspectives of the artist as an individual, of art as the product than the process1. While still maintaining a physical gallery in Finsbury Park, London, Furtherfield also makes full use of online platforms and technology.

Many of its projects fall into the social practice art category2, including DIWO, which focuses on engaging “with social issues while reshaping art and wider culture through shared critical approaches and shared perspectives” (Catlow & Garrett, 2007). Simply put, it’s about working together to create something great, perhaps even greater than if we all worked individually to make our own individual things.

As aforementioned, the importance of different people coming together to create something, is in the myriad of ideas which can be derived from a database larger than your own head3.

On a more logistical level, it might even simply just be that there are some things you can literally only do with others, like creating a gigantic cross across multiple screens.

As established by Randall Packer before, too, this form of creation will definitely require “negotiation”. This was also reiterated during the lecture, where Marc Garrett remarked that individuality should be kept, but also challenged4. Furtherfield’s own projects are certainly no exception. VoiceOver Finsbury Park, for example, relies on the willingness of the participant to give up a degree of privacy, so as to benefit the future of London5.

One of the most unique things about the DIWO approach, though, is that much of it is heavily based around technology, and experimentation with it. Blockchain6, as mentioned by Garrett in the lecture, is an example, where the algorithms of the decentralised database allows for mechanised security.

To end off, a key feature of DIWO is merely that “the process is as important as the outcome”8. Perhaps even more so, in that the artwork is often not the end result, but the process through which it is made. Sometimes, the artist is nothing more than an engineer who creates the platform, while the actions of the audience is the art itself.

Due to the word count, I’ve placed footnotes on everything which had supplementary, interesting information. Additionally, references are also listed where appropriate.

1 From Furtherfield’s About Us page (link). It is also stated that, apart from various indie movements in Britain, their main inspiration was that of the open source structure.

2 Previously mentioned in my post on Open Source. As I’ve mentioned before, ‘social interaction is often an important way to express those messages [of social activism]’.

3 Previously mentioned in my post on the Telematic Embrace. The significance is that ‘the panel discussion involves 60 participants from over 30 countries answering in real time, bringing a myriad of opinions, shaped by each individual’s experiences in their various cultures, to the table’, a prime example of how collaborative work can lead to a much more interesting result.

5 From a review on the Museum of London. VoiceOver Finsbury Park is described as a “hyper-local social radio project, allowing instant, open conversation between people who live in the same building”. The objective is to improve the quality of life in the city through creating connections between people who may have otherwise shunned each other.

6 Blockchains are defined as “a decentralised database cryptographically secured by a network of computers” (00:32:27 of Garrett’s lecture). Furtherfield, being an organisation interested in the use of technology in conjunction with art, works a fair bit with them, such as in their Blockchain Imaginaries Spring Editorial. While blockchains started out as a form of mathematical technology for things like secure finance, they have increasingly become a medium through which artworks can be produced, especially artworks associated with automation, such as terra0 (detailed below).

7 Terra0 is an example of an artwork powered by a blockchain system. How it functions is that the forest, in a sense, governs itself through the use of algorithms (i.e. decentralised autonomous organisation). Key themes involve “ownership, personhood and autonomy” (Ueberschlag, 2016)

8 Quoted in Packer’s article on Open Source Studio, but originally from Marc Garrett. As mentioned at the start, a prominent idea in the modern style of “experimentation”, subverting traditional notions of the product as the art. Interestingly, we learn in another class that this is an idea which is closely associated with modern graphic design too, where the concept is more important than the product.

Featured image courtesy of Packer’s recording of the DIWO Lecture.

One thought on “truly, Interaction in its most Experimental form”