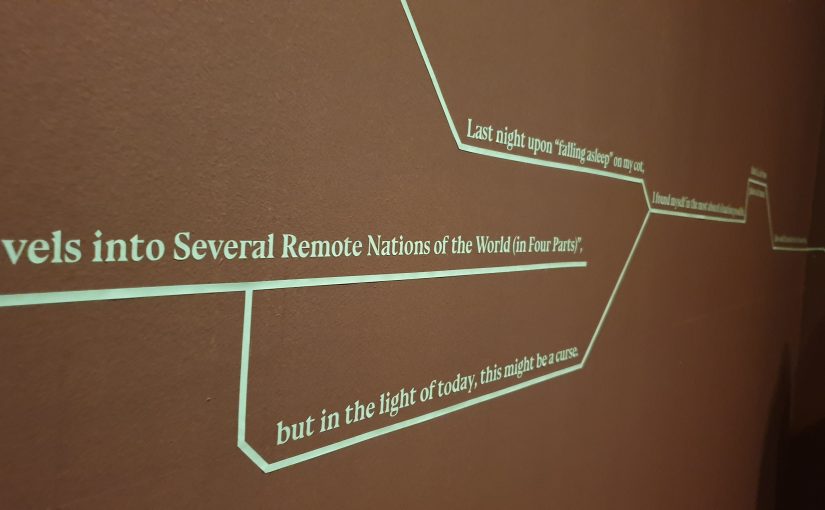 The most evident and most flattering component of the exhibition, in my opinion, is the visual continuity. You have lines of text running across the walls, lines of rope trailing across the rooms, lines of wires scattered all around.

ON THE MACRO LEVEL

As I’ve mentioned before, I think it’s quite evident that the overall Singapore Biennale theme is intentionally designed to be broad and vague, such that practically any artwork can justifiably fit within it. So, I won’t bother going into depth on how it fits the theme: besides, the time and/or movement-based link between “future of islands” and “every step in the right direction” is pretty clear.

Tomorrow Is An Island, as inland, a sin land is an artist-led project that speculates on the future of islands, deep time, the fate of ‘crisis’ as a frame of our predictions and conceptions of future time, and the exchanges between bodies and cities. The title deploys a sequence of anagrams that rescrambles with each new phrase, suggesting that the ways in which the next moment could retain recognizable components of the present but to disruptive effect. (link)

Nevertheless, the existence of the secondary theme distinguishes this exhibition from that of Gillman Barracks. This secondary theme of “Tomorrow Is An Island, as inland, a sinland”, is exemplified by two characteristics.

Firstly, the artists are all of “islands”. In this context, the two islands are Singapore and Switzerland. While a bit of a stretch, it’s justifiable when considering how small both are in comparison to nations like China or the United States.

Secondly, many of the works focus on systems, sequences, the like, as exampled by the shifting anagrams. The “visual continuity of lines” play into this. All the works also play with this in various forms, be it the shadows cast onto the floor, the shifting sediments, the flow of sounds and videos, so on.

Of course, this consolidated theme is possible only because of the small size of the exhibition. A bigger exhibition would inevitably have to resort to a generalised theme, to be able to cover everything.

ON THE MICRO LEVEL

The most eye-catching work, for me, was Forest Tales and Emerald Fictions by Monica Ursina Jäger.

An artist-in-residence with NTU, her presented work focuses on the “shifting topography of Singapore and Southern Malaysia”. Consequently, much of it involves urban infrastructure and natural scenery. Here’re videos: the first has the accompanying audio (from headphones), and the second, details close up:

Regardless, its attractiveness is due very much to the curation, where this work is complete and isolated. The leftmost area feels lacking, where I was there for the opening night, and thus can’t disassociate the “absence of the performance” from an “absence in the space”. The first area is slightly awkward, where it seems to contain “everything which doesn’t fit in the other rooms”.

As such, the singular space provided to this work stands out, where it feels intimate: there’s a seating area, the screens don’t feel overwhelmingly magnificent, the space is dark. Also, the setup is interesting, where it’s not even screens, and the throw distance is exceedingly small:

For me, the biggest takeaway is probably on how limited resources can actually be a boon. After all, it’s easier to consolidate with a smaller pool, and easier to know what you can’t do. At the same time, however, one must be aware of where they ought to allocate resources, such as in building walls and shelves, than trying outright to aim for complete minimisation.