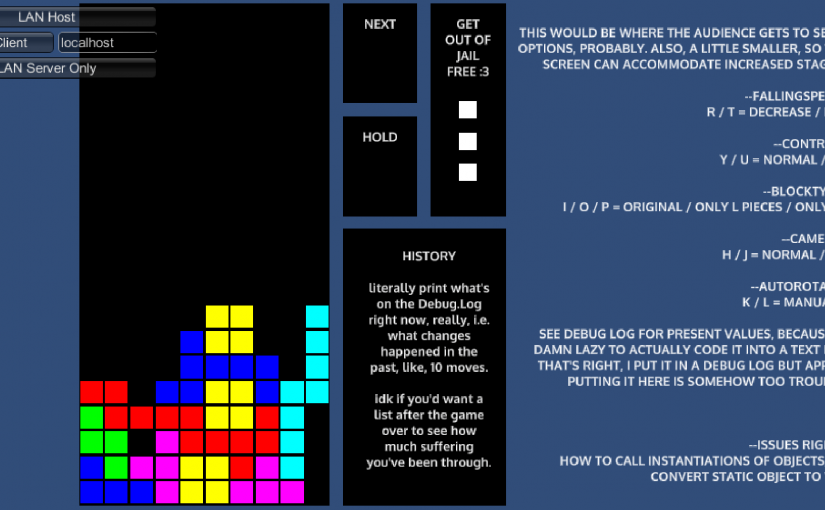 I wrote this as my thought process and guidelines while making the 1st prototype, which has a video as found here:

Literally, just the base game. I’m following this tutorial, though I’m unsure if I need to make any adjustments to prepare for implementing the effects and audience. For example, if I should already change the algorithm to select 3, then 1 from those 3 effects.

Things to consider, on if it should be excluded or included:

While the Player plays Tetris normally, different effects will manifest at certain intervals. I haven’t decided the exact timing, but it might be something like this. I assume that the Algorithm has 0 delay, and that there is an audience. If there is no audience, we can just assume that the Algorithm takes the role of the audience, just with 100% randomised selection rate.

The turnover rate might be too slow, so we’ll see how it goes.

I decided against having a max limit of co-existing effects, since 1) that’d be annoying to make, you’d have to decide how to dispel effects, e.g. after 10 turns, or based on the number of effects currently present. 2) It’d help to increase the difficulty as more and more effects appear, plus the intended algorithm (as shown below) is supposed to be quite lenient.

I’ll try to avoid 100% RNG, since it might make the game too easy or difficult if you happen to get certain effects by luck. So, I’ll use a weighted percentage, based on an effect’s “type” and “last appearance”.

Types can be divided into Variables and Booleans, where some things are either on a scale, or present/absent. For example, fallingSpeedOfBlock is a variable, while reverseControls is a boolean. There’s a third category, which is just Specials, which includes things which shouldn’t be subsumed under either of the suggested two categories.

Last Appearance refers to the last time an effect was manifested. I considered a new category like Potency, but decided against it since the impact of an effect can’t really be judged easily (e.g. maybe Garbage might benefit/disadvantage based on circumstance).

The maximum chance of reappearing decreases with each increment. At the maximum/minimum value of the variable, the possibility of increase/decrease is capped at 0%. For example,

Possible variables would thus include these:

The chance of appearance is constant, and will never fall to 0%. If same effect appears again, it simply switches the boolean value, such that the effect is undone if it’s already manifested.

Possible booleans would thus include these:

Things with a constant rate of appearance, and no on/off state. I have almost nothing right now though. Maybe under New Asset Based (see below).

Usually, things with a constant rate of appearance, and things which may not affect gameplay too significantly. In other words, bonuses and Easter Eggs. The two here are New Asset Based, but I think I should add them anyway (or the first one, at least).

Yeet me off the mortal coil

A special category for things I’ve considered. It’s either too painful for anything to bear, or it might be hard to implement since it involves additional things than just changing values in the system.

The easier part would include changing the algorithm, such that it selects 3 effects than 1, then presents them. After which, the audience can choose 1 out of 3. I haven’t decided if the rate of appearance should be affect if an effect appears, but isn’t chosen.

The harder part would include bringing the audience in.

That also means that, on the Audience side, adjustments must also be made:

Things which I haven’t decided:

Alternatively, I may consider other ways of implementing the audience, such as Twitch Chat (a la Dead Cells). For now, I’m intending to try out Mirror, the substitute for the recently-deprecated Unity NetworkManager component.

I’ve been recommended to use a single script for everything, which is the fairest judgment possible, because the cross-references between scripts right now are too… Much.

So I shall work on that, and attempt to implement the Next queue in the meantime. Also, to attempt to create an algorithm that selects the effects, than selection based on key presses.