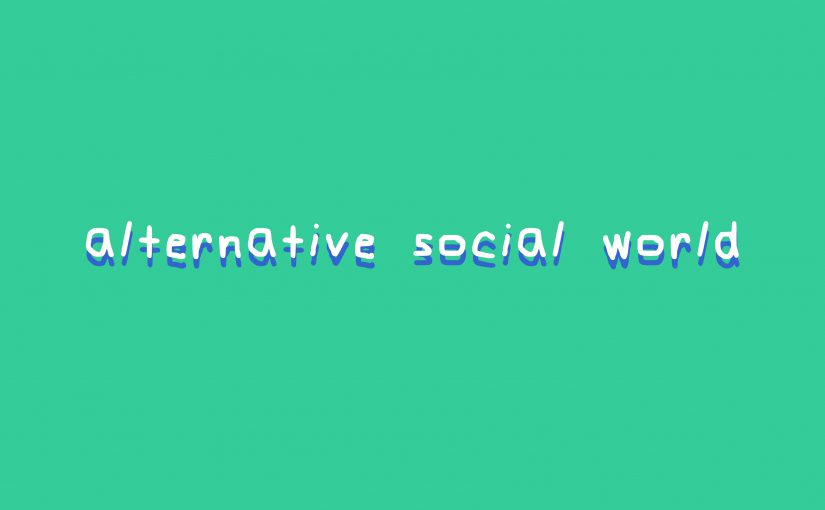 Social broadcasting is a revolutionary phenomenon which strays away from the notion of one-to-many streaming mode. Instead, it allows for many-to-many interactive experiences that bonds artists and audiences in live third space networks. Contrary to traditional media, social broadcasting promotes direct collaboration, interaction and interconnectivity as it utilises the idea of DIWO (Do It with Others). It works towards an “alternative social world” as suggested by media historian and activist Gene Youngblood who agrees that it should distribute the “experience of the broadcast through the creative work of collaborative communities” (Randall Packer. (2018) Social Broadcasting: An Unfinished Communications Revolution)

This is exemplified very clearly in the symposium that I was privileged to have attended through Adobe Connect: a webcam chat-like platform. It really intrigued me how anyone with access to the link was able to provide input and ideas live in the chatbox. This invokes discussion which widens perspectives for both the artist and viewers for the betterment of both parties.

This also encapsulates the idea of collaborative art which was explored in a keynote address in the symposium by Maria Chatzichristodoulou, a performance scholar that specializes in critiquing live Internet art. She talked about telecollaborative arts and its impacts along with many examples.

One that struck my interest was Kit Galloway and Sherrie Rabinowitz’s Hole in Space (1980) which I have in fact wrote about before here.

It is actually one of my favourite art works that Prof. Randall Packer has introduced to me the past semester. Galloway and Rabinowitz were completely ahead of their time. Not only did they think of engaging in social broadcasting in the era of television and radio, they expanded it to reach two different states. It is a literal example of an “alternative social world” where people from different states could interact through a life-sized live screen as seen in the image above. To think that to even be talking and looking at a person from another state live would have been impossible at that point in time without Galloway and Rabinowitz’s revolutionary project just amazes me. Indeed, we have come a long way technologically since projects as such. Today, we can easily reach a person at the opposite end of the world simply by the touch of a small phone screen. 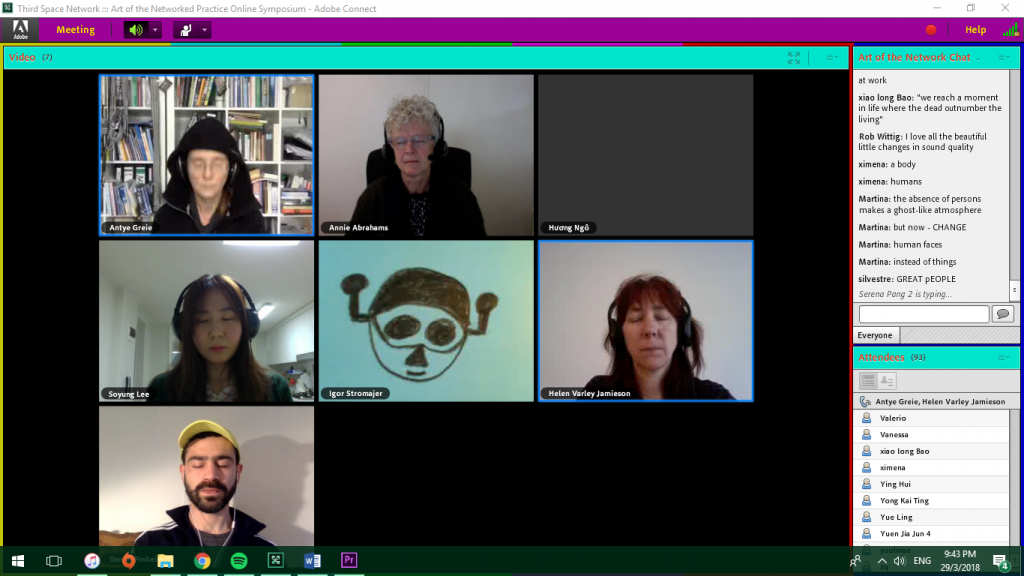 I also got to watch live, an online performance by Annie Abrahams in collaboration with Antye Greie, Helen Varley Jamieson, Soyung Lee, Hương Ngô, Daniel Pinheiro, and Igor Stromajer (see image above) called “Online En-semble – Entanglement Training”. I was really excited to see an art piece by Annie Abrahams which was properly prepared following a protocol. Prior to that, my classmates and I were very privileged to have had her join our class through Adobe Connect where she read us protocols for us to carry out mini performances. It was very on-the-spot and without practice thus the results were not the best in my opinion. Even so, Annie Abrahams was the sweetest to keep commending our efforts.

I was actually surprised that the process of an online collaborative performance as such was not as easy as I thought. So much effort had to be put in to coordinate and work together. This is not including the minor technical mishaps such as the sound system and lagging screens. This was why I was really interested to watch her live performance on the first day, knowing the struggles behind producing one. 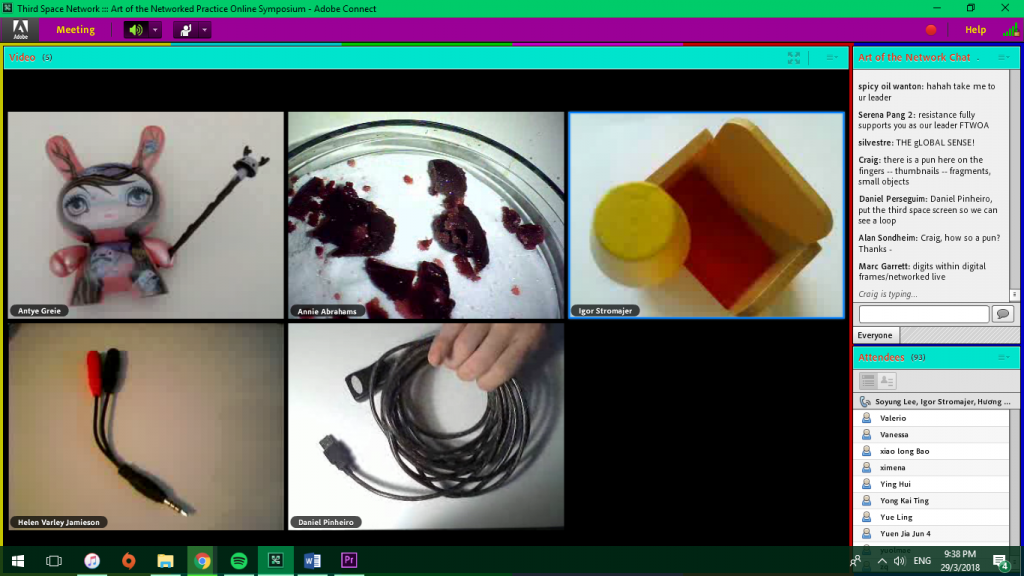 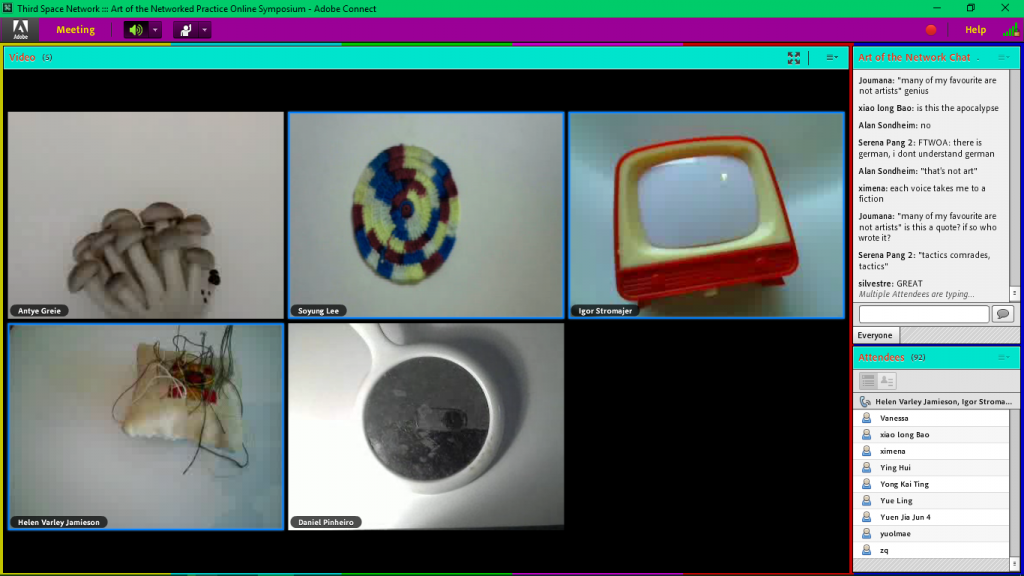 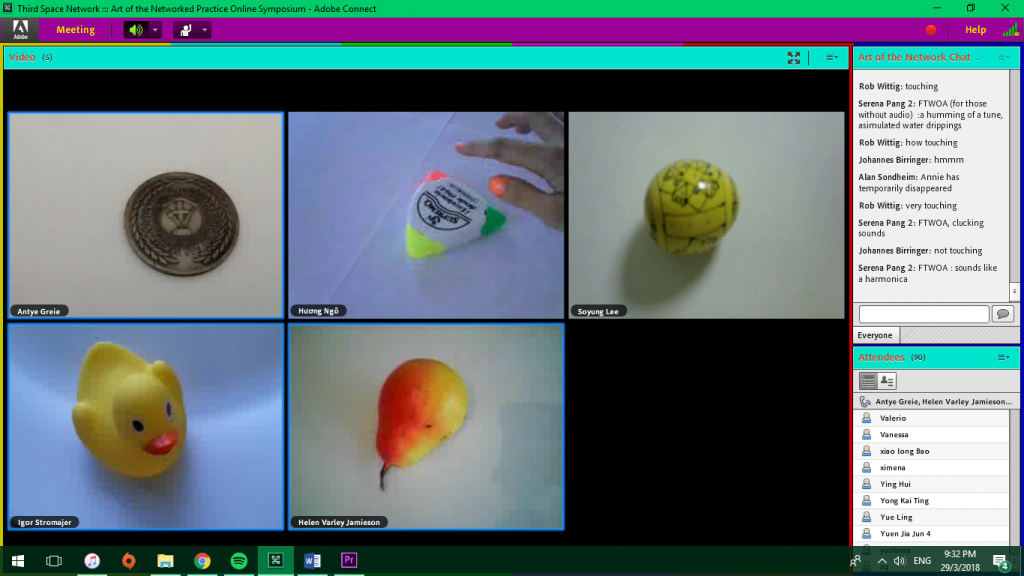 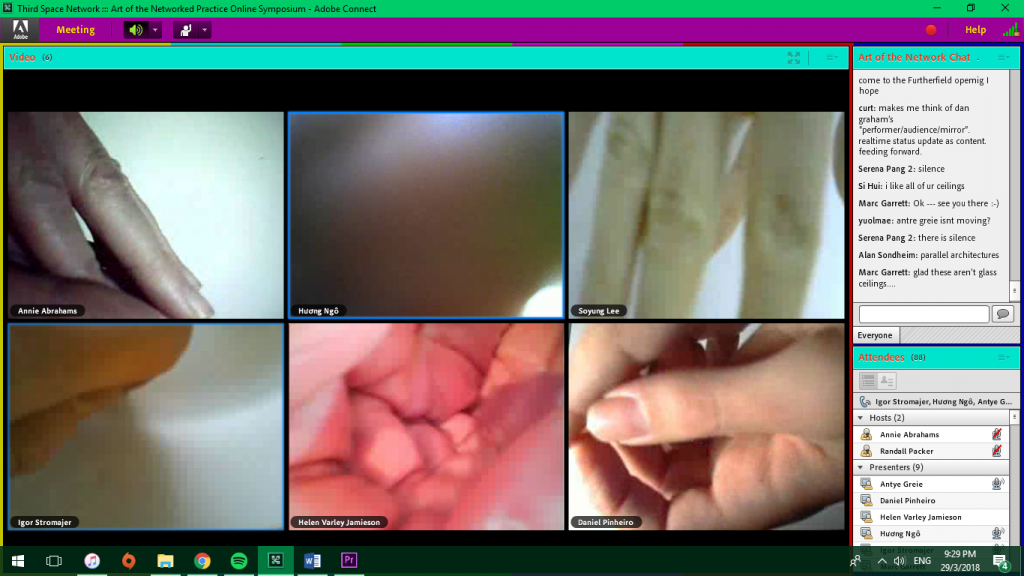 Lo and behold, it was a beautiful experience. The visuals that came out of it were fantastic as you can see in the screenshots I have taken above. Of course, we can never run away from technical issues. The amazing thing about Annie Abrahams is that she sees the beauty of the technical problems unlike many human beings. We tend to frustrate over lags and bad connections but she does not see them as a bad thing at all. Instead, she utilises it to creating something more beautiful. According to Randall Packer, in one of her online sessions, the webcam experienced technical difficulties yet she used it to her advantage by creating an eye-catching visual by getting the participants to purposely turn their cameras on and off, creating a blinking image (Randall Packer, 2018, Disentangling the Entanglements). I appreciate that she creates art out of flaws and includes it in final performance recordings to truly express the beauty of it. 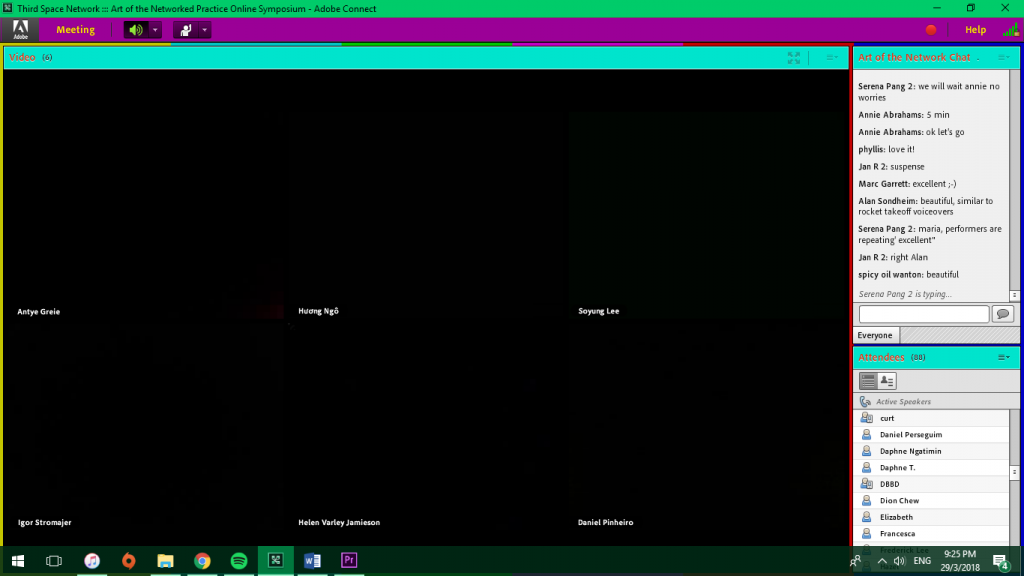 The most interesting part of “Online En-semble – Entanglement Training” was when participants read out the latency in their connections as their screens are blacked off as seen in the image above. This makes the latencies the subject of the performance start. It interested me because it shows how we are all in the same online “third” space together but not actually really at the exact same time. This brings about the question of how close can the proximity of relationships exist through a third space? Will technology ever bring it to be the same as real-life relationships?

The participants variate between saying out the latencies and the word “excellent”. A comment that caught my interest was “the latencies are similar to rocket take-off voiceovers”. It made me look at the performance piece in a different perspective. This brings me back to my point on how the chat system enables fresh perspectives or feedback to be provided live.

On the second day, guest speaker Matt Adams from Blast Theory talks about the history and works of his group. Blast Theory infuses interaction into their works through the use of interactive media such as games. Their works are great examples of social broadcasting. Their works allow the interaction between the broadcasters and audience. In a way in fact, the idea of an audience is being negated. For example, in “I’d Hide You” (see video below), he gathered four participants to play a game whereby they had to run around the city to sneakily look for and take pictures of one another. Thing is, the game cannot be run without participation of the “audience” being people online and passer-bys in real life as well.

The players had to rely on the “audience” who had access to a full map of the whereabouts of other players to emerge victorious. In this case, the audience become the “artist” who decides the outcome of the game, who they want to support or defeat.

I think that this is a creative way to express the idea of doing it with others. They had to rely on collaboration to carry out the broadcast. The same goes to works of Annie Abraham and several other online performance artists as such. I do agree that we should be working towards creating an “alternative social world” given the advanced technology that we have today. To bring together people from all over the world to create beautiful pieces of art is amazing. It moves us away from the self-centered society that we cannot help to be in today’s world of consumerism.

One thought on “Alternative Social World”