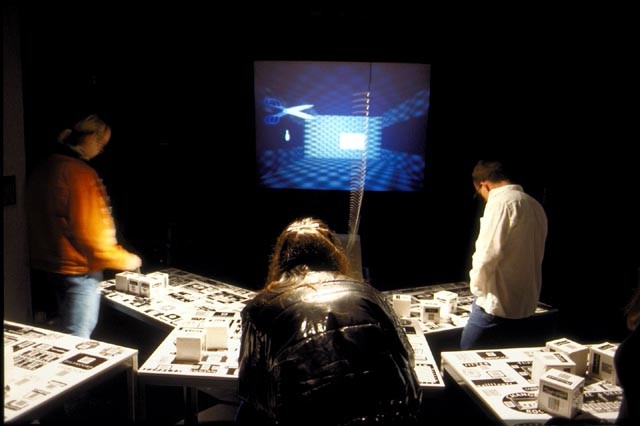 Bar Code Hotel is the work of Perry Hoberman that I have selected. It is an artworks that works around a lot of bar codes. Upon entering the room, you will be welcomed by a colourless (white) space, numerous black and white bar codes and a large projection wall. You will then have pick up a pair of 3D glasses before settling yourself behind one of the long tables covered with bar codes as seen in the images below.

On the tables are a few light pens or “bar code wands” where you are supposed to run over the bar codes. When done so, peculiar shapes such as a porcupine-looking sphere, a radio and light bulbs will be projected onto the big screen, spiraling around. Some of the words have commands like ‘jump’ or ‘flee’ which when scanned over, makes the objects smaller, bigger, change colour or turn 360 degree. The interesting part to me is that you are able to control the objects on screen simultaneously with multiple other participants. Interaction then expands from between you and the installation itself to you and other participants as well. Attached below is a video of the work:

Participants get to enjoy forms activated by their own actions and reactions. As most interactive works, Hoberman’s works fall towards entropy and indeterminacy as results fully depend on participants given that the bar codes can be scanned at any time. Graphics created vary between the different groups of participants as seen in a few of the screenshots here.