The Penrose staircase is a continuous staircase, a 2D depiction of a staircase in which the stairs makes four 90-degree turns as they ascend or descend yet forming a continuous loop. 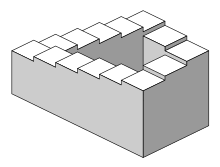 This inspired an artist M.C Escher to make a lithograph which would be famously known as

I was more inspired by his earlier work; Relativity which lacked the looping aspect. More mysterious than logic it seems.

225 images in total. But was relatively easy to film a moving subject and stagnant background.

In fact there is definitely many more ways to exploit the composition of staircases x M.C Escher such as placing different sequences side by side and in different directions such that the perspective made sense. But because my perspective was inaccurate it was a tedious and non aesthetic processor piecing the work together on a single screen.

The Penrose illusion wasn’t so easily replicated. I used the same flight of stairs to make interesting angles and an endless loop if you will.

One Reply to “Penrose Staircase Illusion (WATCH WITH MUSIC)”