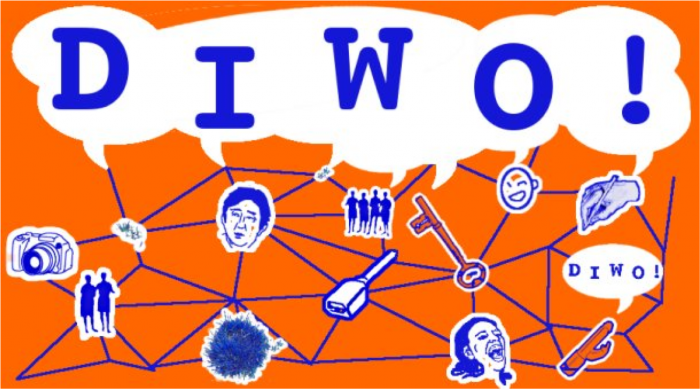 The idea behind DIWO – Do It With Others is for the freedom of collaborative works of all sorts of mediums and can begin from all sorts of mediums. Like what was stated on the Furtherfield website, “Peers connect, communicate and collaborate, creating controversies, structures and a shared grassroots culture, through both digital online networks and physical environments.”

Some of the contexts of where DIWO or Furtherfield derived is from DIY – Do It Yourself – itself, where people started everything by themselves, creating communities, having more control. Then they get inspired by other artists that question the world around them, the politics, the technology, which allows them to be able to explore the ideas of the artists. They don’t do art for marketing, but more of creating a culture and getting ideas. Not only to understand new technology but to see what you can do with it. They also encourage to learn something beyond what you are used to, exploring “a new cultural dynamic”. Create a content that is not by the individual, but creates something more engaging by challenging to work with others.

This has allowed “people to learn a lot of new things which is they wouldn’t even have the privilege of learning” according to Mark Garrett in the lecture. Also, it doesn’t matter if the works are technology savvy or not, but the more important thing is whether or not the works communicate with the audience.

In the lecture, it also mentioned that, Farecoin and Furtherfield also plan to work together to create their own culture coin and a shared value system, which is a very DIWO concept – not achieving something alone and ending it there, but rather putting the whole team out there and achieving it together as a team.

As mentioned earlier, DIWO not only encourages to work with others but also encourages the individual to explore something that is out from the comfort zone. How it would work with others is by working with someone who you can learn something different and new from them and also in a way making the work better by involving different media and elements, not just from one person or one type of method or style. What was mentioned in the lecture was:

“If you’re on your own, isolated and you try to produce genius, you’re not. The genius is in others not just in yourself. A collective genius”

One can’t exist without the other.

How it has worked in Open Source is that people with different minds and understanding could contribute to an existing content to make it better. This has also created an understanding for me on how to collaborate and work together with other people in the class in a way that putting more minds together to make a project work better. Do something you cant possibly do alone, and create something that you would not have thought of by yourself.